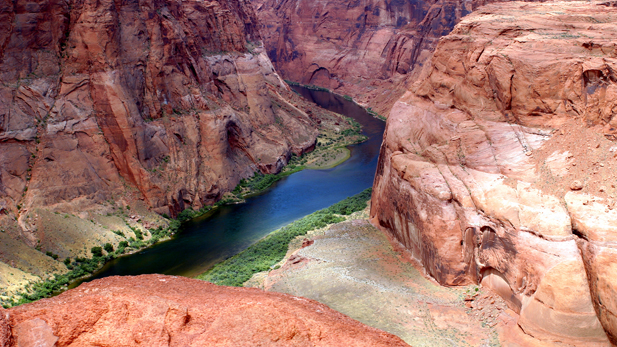 By the time the Colorado River reaches the soft sandstone of southern Utah, it is a large, powerful river, cutting deep gorges into the Colorado Plateau.
Laura Morales, Fronteras Desk

The U.S. Interior Department has come up with a way to manage the Glen Canyon Dam for the next two decades.

The plan released Friday would provide water and power for its many customers in the West while attempting to protect the environment in the Grand Canyon downstream.

When water is released from the dam to create hydropower, beaches along the Colorado River erode, leaving little habitat for endangered fish or protection for cultural resources. In recent years, dam operators have released high flows in attempts to rebuild some of the beaches.

Under the new plan the federal government will continue the high flows and replace some of the fish that have died.

The seven states that rely on the Colorado River as a water source, the power companies and the Navajo Nation have supported the new plan.

But environmentalists like those from Save The Colorado say the impact statement doesn’t comply with federal law. The group says the new plan would not “recover” the endangered fish and it doesn’t address climate-change impacts on the river.

The Interior Department will make a final record of decision after a month-long public review.

Foundation to Put $20 Million into Restoring Colorado River Uranium Push-Pull Near Grand Canyon in Appeals Court Experimental High Flows Start at Glen Canyon Dam
By posting comments, you agree to our
AZPM encourages comments, but comments that contain profanity, unrelated information, threats, libel, defamatory statements, obscenities, pornography or that violate the law are not allowed. Comments that promote commercial products or services are not allowed. Comments in violation of this policy will be removed. Continued posting of comments that violate this policy will result in the commenter being banned from the site.