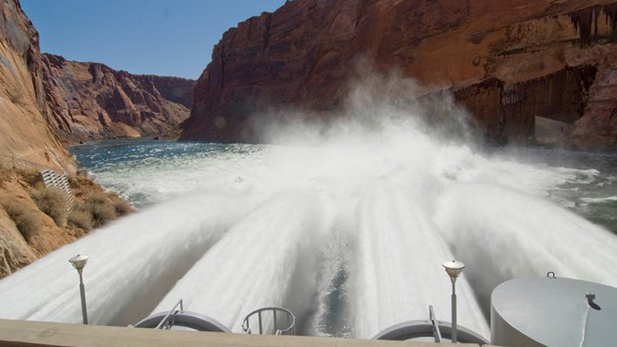 By Fronteras Desk, for AZPM

A chunk of sandstone estimated to weigh 250 tons has been kept from breaking off a wall at Glen Canyon Dam on the Arizona-Utah line, federal officials say.

In late August, the slab of Navajo sandstone started to break away from the canyon wall. Teams of three to eight workers at a time have rappelled down to drill bolts into the slab to stabilize it, said Chris Watt, spokesman for the Bureau of Reclamation.

Watt said the danger was a natural development and not the result of human activity.

"This kind of reaction of Navajo sandstone was noted ... in some of the early notes when they built the dam," Watt said. "The wind gets to it. The water gets to it. And as the crack forms in the winter, the water will get in there and freeze and expand it."

Watt said workers expect that all restrictions on activities in the vicinity of the slab should be lifted by the first week of October.

Interior Secretary Reinforces Glen Canyon Dam Preservation Pascua Yaqui clinic working to treat opioid addiction, overcome stigma DOJ sanctuary city crackdown won't impact Arizona cities, US attorney's office says
By posting comments, you agree to our
AZPM encourages comments, but comments that contain profanity, unrelated information, threats, libel, defamatory statements, obscenities, pornography or that violate the law are not allowed. Comments that promote commercial products or services are not allowed. Comments in violation of this policy will be removed. Continued posting of comments that violate this policy will result in the commenter being banned from the site.