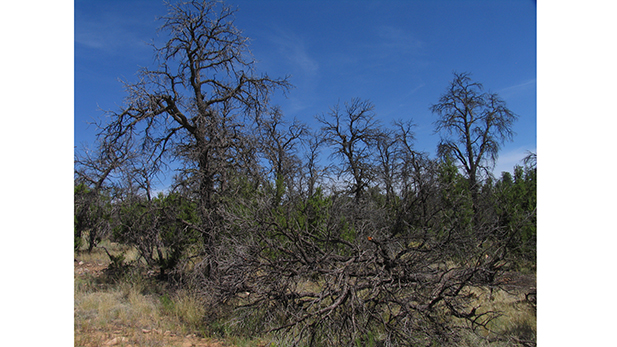 Forests worldwide are vulnerable to growing risks of drought and heat-induced tree mortality because of a steadily warming Earth, reports a study that a University of Arizona natural resources professor contributed to.

Scientists at the U.S. Geological Survey and Los Alamos National Laboratory along with the UA’s Dave Breshears looked at more than 400 research studies on forest mortality. They wanted to answer the question: are forests becoming more vulnerable to projected climate change?

Their findings were published in the scientific journal Ecosphere and recently presented to the Ecological Society of America.

“As scientists, we are underestimating how much of this is going to happen in the future. We’re in for a lot more tree mortality in the future,” Breshears said.

Breshears says trees have an aesthetic value, such as for shading and providing microclimates in urban areas such as Tucson. But trees also play a key filtering role in the ecosystem, especially in light of climate change.

Forest die-off events to date represent only the beginning of an increasing phenomenon of such mortality episodes. While trees have processes to allow them to survive drought stress, during hotter droughts, the warmer temperatures increase the stress and mortality risks.

“At some point during these hot droughts or during heat waves we’re pushing trees over the edge,” Breshears said.

Breshears says he and his colleagues hope their work will be used by scientists and policy makers to figure out how to reduce global warming.

After Congress approves new border wall funding, environmentalists consider next steps New letter asks Mexican officials to help stop border wall construction Land swap of Oak Flat due to start Friday
By posting comments, you agree to our
AZPM encourages comments, but comments that contain profanity, unrelated information, threats, libel, defamatory statements, obscenities, pornography or that violate the law are not allowed. Comments that promote commercial products or services are not allowed. Comments in violation of this policy will be removed. Continued posting of comments that violate this policy will result in the commenter being banned from the site.