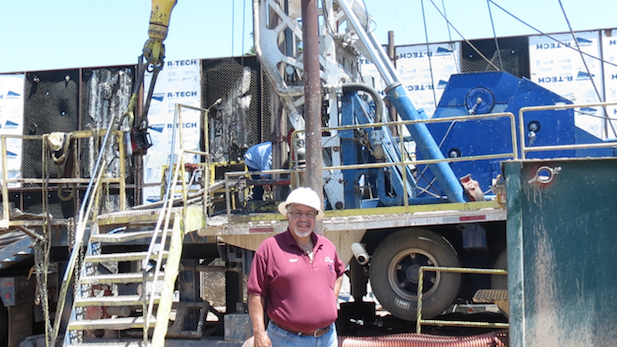 By Will Stone, for Arizona Public Media

The drought continues to strain farmers and cities throughout the Southwest, and that means business couldn't be better for one Arizona industry - well drillers.

"It’s going to be at least nine months, just to get on the schedule," says Ralph Anderson, vice president of Arizona Beeman Drilling, based in Gold Canyon east of Phoenix.

Anderson stands near a drilling operation in central Arizona where his crew is completing the cleanout of a nearly full well, watching dirty water spilling through a grate.

"This is a rig that’s capable of drilling down to 2,000 feet," he says, then adds, laughing: "Makes me happy when you look at just water coming out, that you know it’s going to be pure blue water here in a few minutes."

That’s not the only reason Anderson is feeling good. His company's business is booming, with some companies sending him deposits of close to $1 million just to save their spot in line for a well. Anderson says demand has rebounded to what it was before the recession hit.

"And it’s been about a 4- or 5-year recovery, but now it’s because of the drought in California that stripped away a lot of the drill rigs," he says.

That comes just as many cities and water companies in Arizona are trying to beef up their well infrastructure. Finding enough trained drillers in Arizona has been a challenge for Anderson.

"They’re roughnecks, and they’re in danger all the time," he says of rig workers. "There’s 30-foot pieces of steel that weigh 8,000 pounds that are being lifted 40 feet above their head."

Luis Balderama, one of Anderson's workers, is on a break, reflecting on what it's like to work as a driller.

"Not just anyone wants to jump in it, because they know it’s hard work,' Balderama says.

Drillers such as Balderama hold the keys to Arizona’s drought insurance policy. Unlike California, where groundwater was unregulated until recently, Arizona pumping has been restricted in the most populated areas for decades, and for good reason: If Lake Mead's level falls too low, Arizona is the first state to lose water.

"The fact that we knew that we were at a risk of shortage put us on notice," says Rita Maguire, former head of the state water department. She says the state began storing billions of gallons underground, just in case.

"I call it our IRA account," Maguire says. "Put money away for, not the rainy day, but, in our case, the very dry days, as we’re seeing now."

That’s where the wells drillers come in. They make those withdrawals not just for cities, but for farmers, whose situation is especially urgent.

That has put Brian Betcher, manager of an irrigation district south of Phoenix, into action getting his agency's wells in order. Central Arizona Project allocations from the Colorado River could be cut as early as 2017, so Betcher is preparing now to tap groundwater.

"You can’t always get the people you need when you need them," he says of well drillers. "There’s only a few people that are expert enough to do repairs to old wells. So you have to grab them when they’re available."

Arizona has an estimated 9 million acre-feet of water banked away underground, about what the Phoenix area uses in close to a decade.

Tapping into it will keep Anderson’s drilling company busy for years to come, he says.

"We’re looking at water being our lifeblood," he says. "So it’s something that we can never get enough of."

Flake Looks to Safeguard Arizona's Water Allotment UA Research: Sierra Nevada Snowpack Lowest in 500 Years State Rejects Requested Ban on Expanding Irrigation
By posting comments, you agree to our
AZPM encourages comments, but comments that contain profanity, unrelated information, threats, libel, defamatory statements, obscenities, pornography or that violate the law are not allowed. Comments that promote commercial products or services are not allowed. Comments in violation of this policy will be removed. Continued posting of comments that violate this policy will result in the commenter being banned from the site.