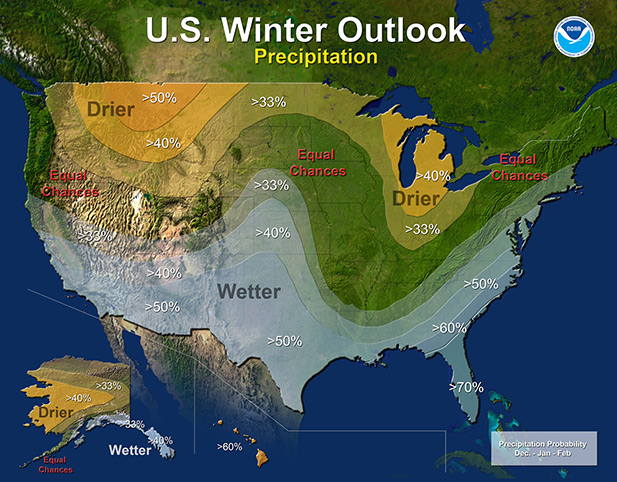 The West, South and mid-Atlantic are expected to have greater than normal precipitation over the 2015-2016 winter due to the effects of an El Nino.
NOAA
Listen:

Expected higher-than-average precipitation in the West this winter from the impending El Niño will not wipe out Arizona’s drought deficits.

National Oceanic and Atmospheric Administration’s forecasters said Thursday the weather patterns are setting up to provide above-average temperatures in the West and northern-tier states, and above-average precipitation along the United States’ southern tier, from California to Florida, and up the Atlantic seaboard to southern New England.

“While there is some optimism in (El Niño) helping with the drought in California, a full recovery is likely to be uneven across the West, and it’s also likely to take more than one season of above-normal precipitation,” said NOAA hydrologist Alan Haynes.

El Niño’s activity is not expected to kick in until December or January.

Forecasters Predict Arizona Will Return to Drought Conditions El Niño Rains Predicted to Reduce Drought Severity Freezing Temps Hit Southern Arizona Early
By posting comments, you agree to our
AZPM encourages comments, but comments that contain profanity, unrelated information, threats, libel, defamatory statements, obscenities, pornography or that violate the law are not allowed. Comments that promote commercial products or services are not allowed. Comments in violation of this policy will be removed. Continued posting of comments that violate this policy will result in the commenter being banned from the site.