It hits the elderly hardest, it spikes in summer and winter, it killed men in Arizona at sharply higher rates t by Emilee Miranda, Cronkite News Tweet 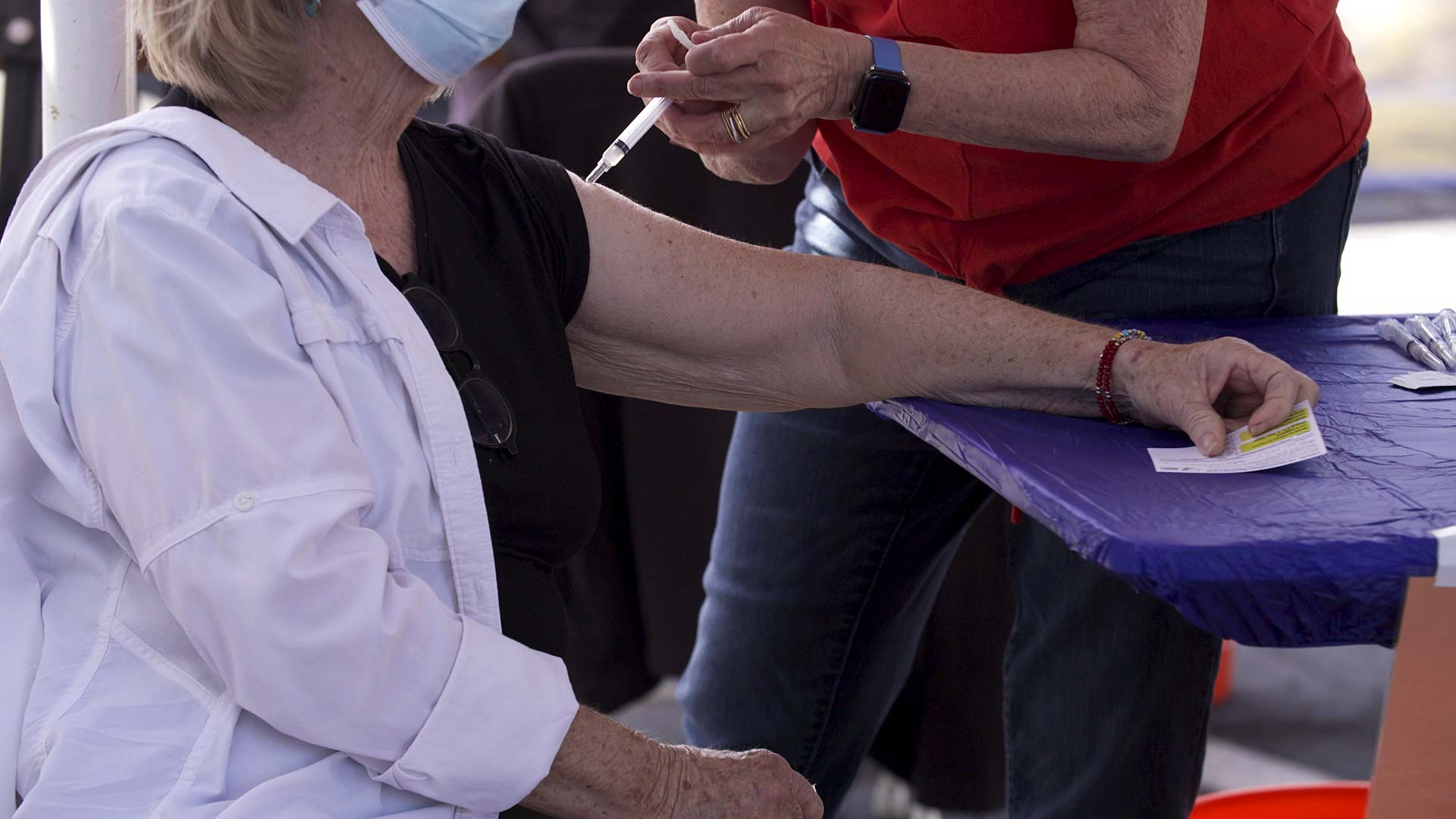 A woman receives a COVID-19 vaccine during a mobile event run by Pima County and Tucson Medical Center outside St. John the Evangelist Catholic Church on March 6, 2021.
Nate Huffman/AZPM Staff

Almost three years after the first COVID-19 cases were detected in Arizona, here’s what we know: It hits the elderly hardest, it spikes in summer and winter, it killed men in Arizona at sharply higher rates than women and new strains continue to evolve.

And it’s not going away.

“COVID is here to stay. It’s going to join the suite of respiratory diseases that we have,” said Dr. Georges Benjamin, executive director of the American Public Health Association.

More than 2.3 million cases have been confirmed in Arizona since the first two cases were detected on Jan. 19, 2020, according to the latest data from the Arizona Department of Health Services. COVID-19 was blamed for the deaths of 32,182 Arizonans as of last week and was on pace to be the leading cause of death in the state at one point during the three-year period.

But one health expert said he expects cases to increase slightly in the coming weeks, mirroring past trends that showed a spike in cases during the summer and winter months.

“It’s a very predictable six-month pattern. I think that will continue to be the case, I think in large part due to waning immunity,” said Will Humble, executive director of the Arizona Public Health Association.

That is due in part to the continuing variations in the virus. The January 2022 spike in Arizona cases was attributed to the emergence of the omicron variant, and coincided with the largest spike of cases nationally, at 5.6 million, according to the Centers for Disease Control and Prevention.

That variant was highly contagious but less likely to cause severe illness and death.

“So because it was more infectious it posed a huge risk, but fortunately its clinical presentation was a lot milder. There was more community immunity through vaccinations and previous infections,” Humble said.

Humble blames the peaks in deaths and cases not on a lack of vaccine uptake, but on the failure by state officials to implement early preventive measures.

“Take the summer of 2020, our hospital systems were in crisis standards of care in July 2020,” Humble said. “And that directly resulted from the fact that (then-Gov. Doug) Ducey did not implement any interventions around distancing capacities in bars, restaurants, and nightclubs until we were in a crisis standard of care, then they finally did that.”

Health experts cannot say for sure why men in Arizona had a higher death rate than women, with men accounting for 59% of fatalities. Nationally, men accounted for 55% of deaths, according to the CDC.

One possible explanation might be lower vaccination rates among males. While vaccinations by gender were not immediately available from the state, the CDC said that 66.3% of men nationally had been fully vaccinated by last week, compared to 70.7% of women.

Experts also worry that they are beginning to see a decline in all people getting vaccinated or getting an updated booster.

“There’s a vaccine fatigue out there for sure, but you know this is a natural maturation of our knowledge of vaccines,” Benjamin said.

The latest CDC data show there have been almost 664 million vaccines administered in the U.S., of which 14.3 million were in Arizona. But while 77.1% of eligible Arizonans have been vaccinated, that number falls to 13.7% for people who have received an updated vaccination and a booster – below the national average of 15.1%.

But even with vaccinations on the decline, experts are optimistic that hospitalization will not reach the critical levels they did in 2020 and 2021.

“I don’t think we’ll ever see another spike in deaths like we saw the summer of 2020 and the holiday season of 2020-2021,” Humble said. “Between those two (years) there were more than 25,000 COVID deaths and I would be shocked if we ever see that from this virus again.”

While COVID-19 hospitalizations are likely to continue to decline, experts said hospitals face a new challenge: COVID-19 cases combined with hospitalizations from the flu and respiratory syncytial virus, known as RSV.

“I don’t think we’re going to see the scale we had in January and February of 2021, but I think we will have an increasingly difficult situation in Arizona hospitals in about a month,” Humble said.

Even as deaths, hospitalizations, and cases are lower than they have been, experts want to remind people that COVID-19 is still present and there are certain precautions that still need to be taken.

“First of all, be up to date on your vaccine. Secondly, continue handwashing, continue wearing a mask when you’re around people that you don’t know their vaccination status,” said Benjamin. “And of course, if you’re not feeling well, if you have any flu-like symptoms, cough, cold fever, sore throat, etc, stay home.”

Student gumshoes at GCU collaborate with Phoenix police to create shoeprint database Vertical farm in Avondale promotes sustainability, technology, water conservation ‘We were always sovereign’: Hia-Ced O’odham seek federal recognition as a tribe
By posting comments, you agree to our
AZPM encourages comments, but comments that contain profanity, unrelated information, threats, libel, defamatory statements, obscenities, pornography or that violate the law are not allowed. Comments that promote commercial products or services are not allowed. Comments in violation of this policy will be removed. Continued posting of comments that violate this policy will result in the commenter being banned from the site.