With thousands arriving to Mexico's border with Central America on their journey to the U.S. by land, has southern Mexico become the de facto border wall? by Jorge Valencia, Fronteras Desk TWEET SHARE 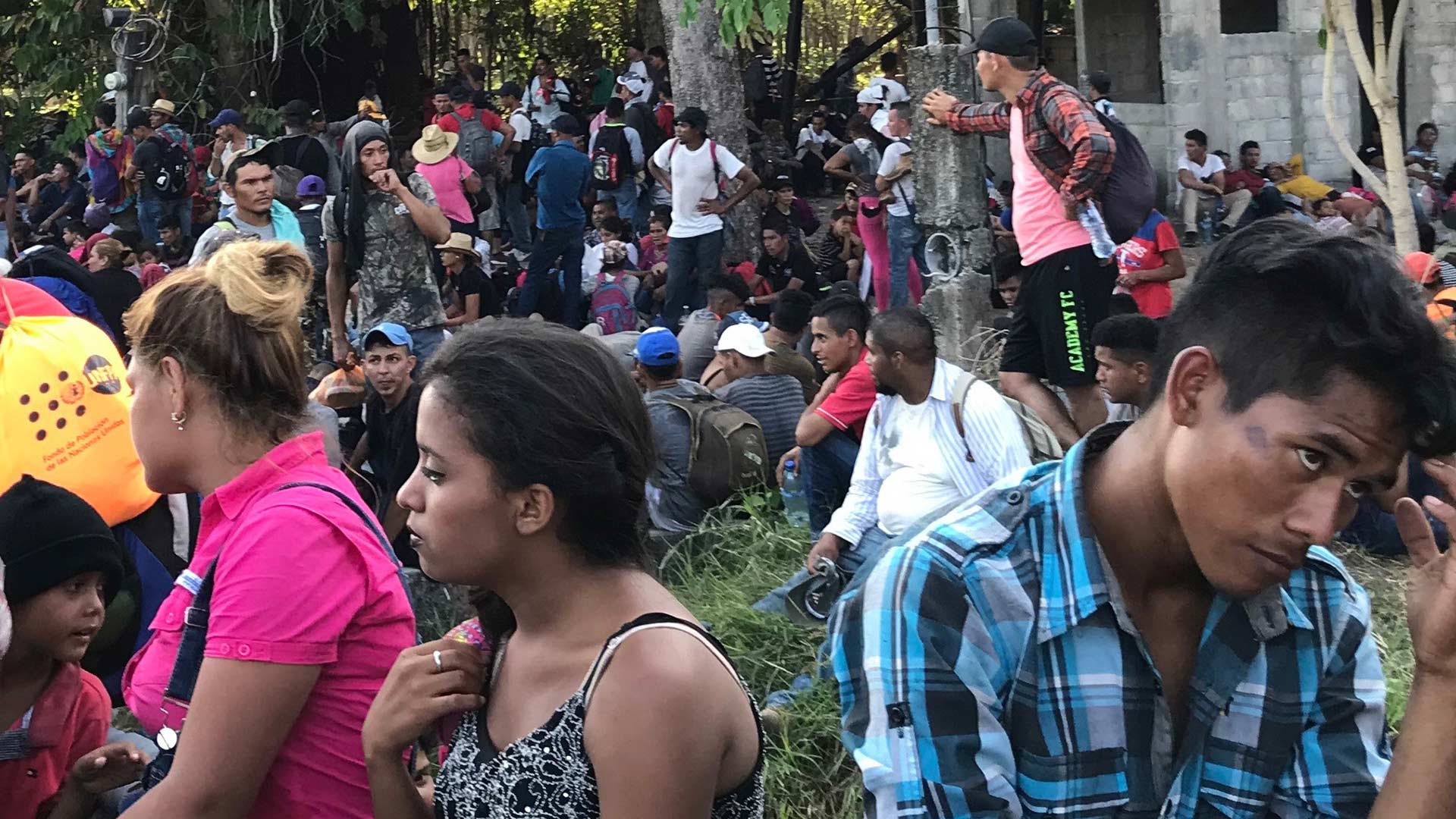 Mexico has long been a thoroughfare for migrants hoping to reach the U.S. by land. Now, as caravans of thousands of people have been arriving to Mexico's border with Central America, Mexican authorities have begun to stop their flow north. Is Mexico reacting to President Donald Trump's demands to keep migrants from reaching the U.S.? Has southern Mexico become the de facto border wall? And what lengths do people go to get there?

This story was produced by Fronteras Desk

Along with hundreds of other migrants, Ariel Guerra reached the small and humid town of Mapastepac, Mexico, by foot. He had walked across the border from Guatemala, and then marched under blistering sun for three days to a soccer field here where immigration authorities had told him they would process his application to legally stay in Mexico.

Instead, Guerra, a 33-year-old from central Cuba, arrived in early April and waited. And then he waited more. He ate and slept on a soccer field for more than a week outside a coliseum overflowing with other migrants who had arrived before him. 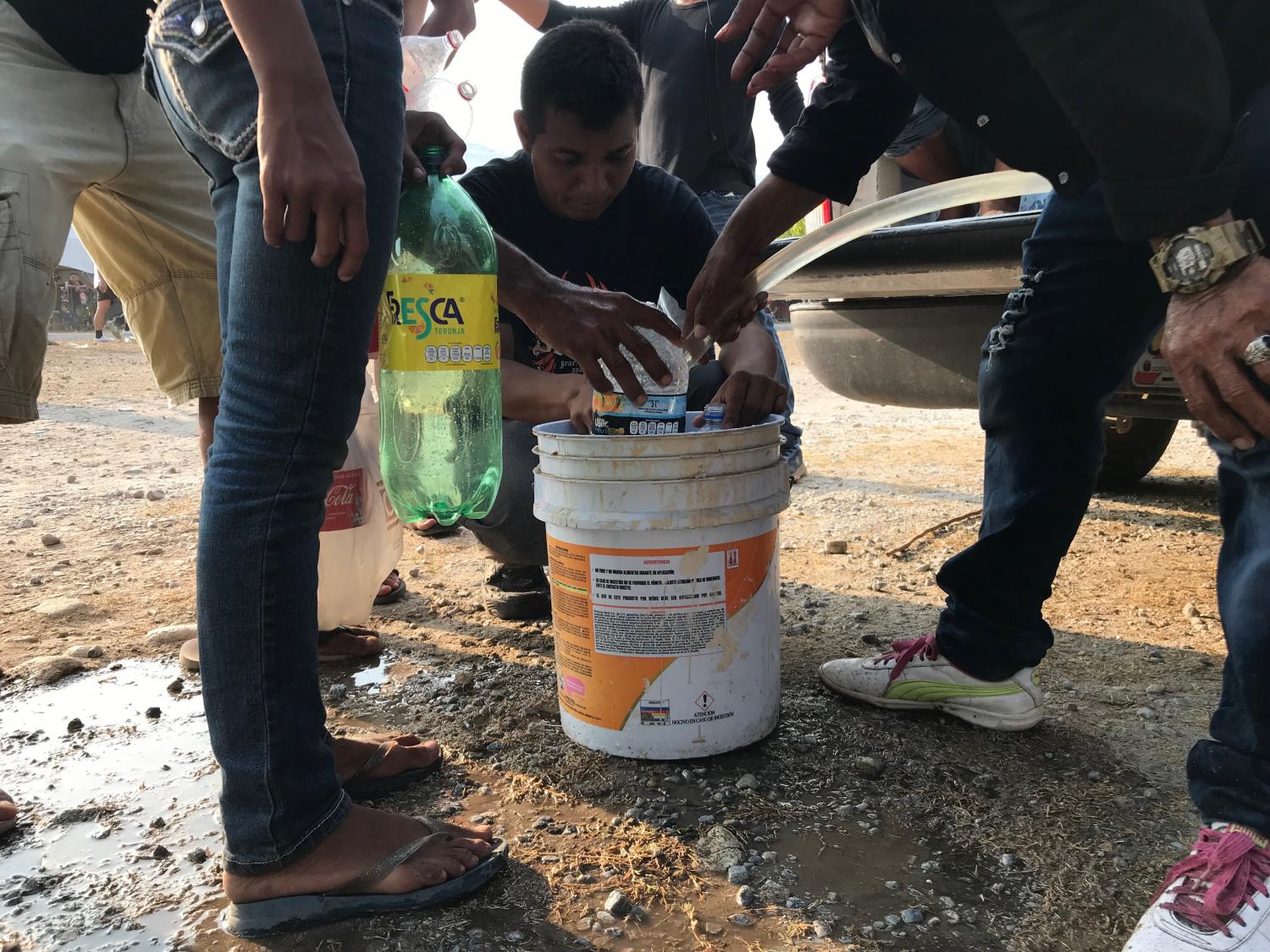 VIEW LARGER A government-owned pickup truck delivered a tank with potable water to the migrants at the coliseum in Mapastepec, Mexico, in mid-April 2019.
Jorge Valencia/Fronteras Desk

Guerra was lucky. He was carrying enough money in his pocket to buy a bare single-size mattress to throw on the soccer field and sleep. But most others around him — hailing primarily from Cuba and Honduras — were not. Most slept on flattened cardboard or blankets they stretched across the grass. The government installed a large tent over the field after five days, protecting them from the sun, and a pickup truck delivered a tank full of potable water every day.

“This is a pigsty,” Guerra said after nine days on the field. “It's like we're not even human. They treat animals better than this.”

More than 1,600 migrants waited in and outside the coliseum in Mapastepec, the National Immigration Institute said in mid-April. Mexico’s policies for them and many more arriving to the country’s southern state of Chiapas have become unclear and often contradictory.

During President Enrique Peña Nieto’s presidency, from 2013 to 2018, Mexico deported more than half a million migrants, often detaining them and returning them to their native countries the following day. But when President Andres Manuel Lopez Obrador took office late last year, he promised to prioritize migrants’ human rights.

In January — as people traveling primarily from Honduras, El Salvador and Guatemala, had begun arriving in groups of thousands — Mexican immigration officials issued more than 11,000 humanitarian visas. Many more continued to arrive, and Mexican immigration officials said they were overwhelmed with applications and told migrants to stay put in camps and parks across southern Mexico. 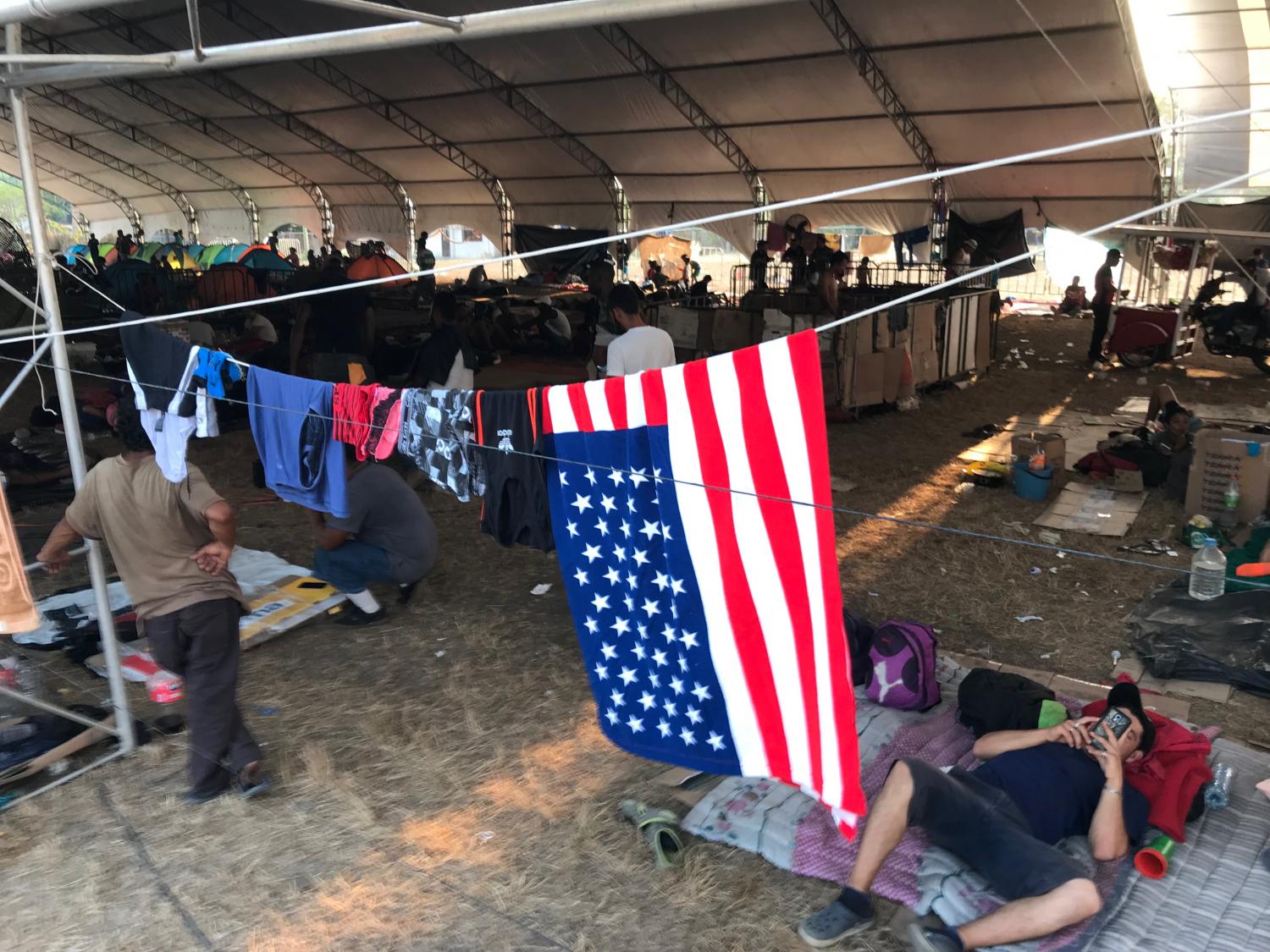 VIEW LARGER More than 1,600 migrants waited in and outside a coliseum in Mapastepec, Mexico, in mid-April, as immigration officials said they were overwhelmed with requests for humanitarian visas.

In April, immigration officials with the help of law enforcement began conducting raids on large groups of migrants, or caravans, that tried to steer away from camps. Immigration Commissioner Tonatiuh Guillen, in a press conference, said officials only disbanded caravans of people who refused to register with officials. “We’re tending to the wellbeing of migrants,” Guillen said. “We need to know who is in our country.”

Foreign Relations Secretary Marcelo Ebrard, in a press conference, rejected the possibility that Mexico has been detaining and deporting migrants acquiescing to tweets from President Donald Trump demanding that Mexico stop migrants from reaching the United States. 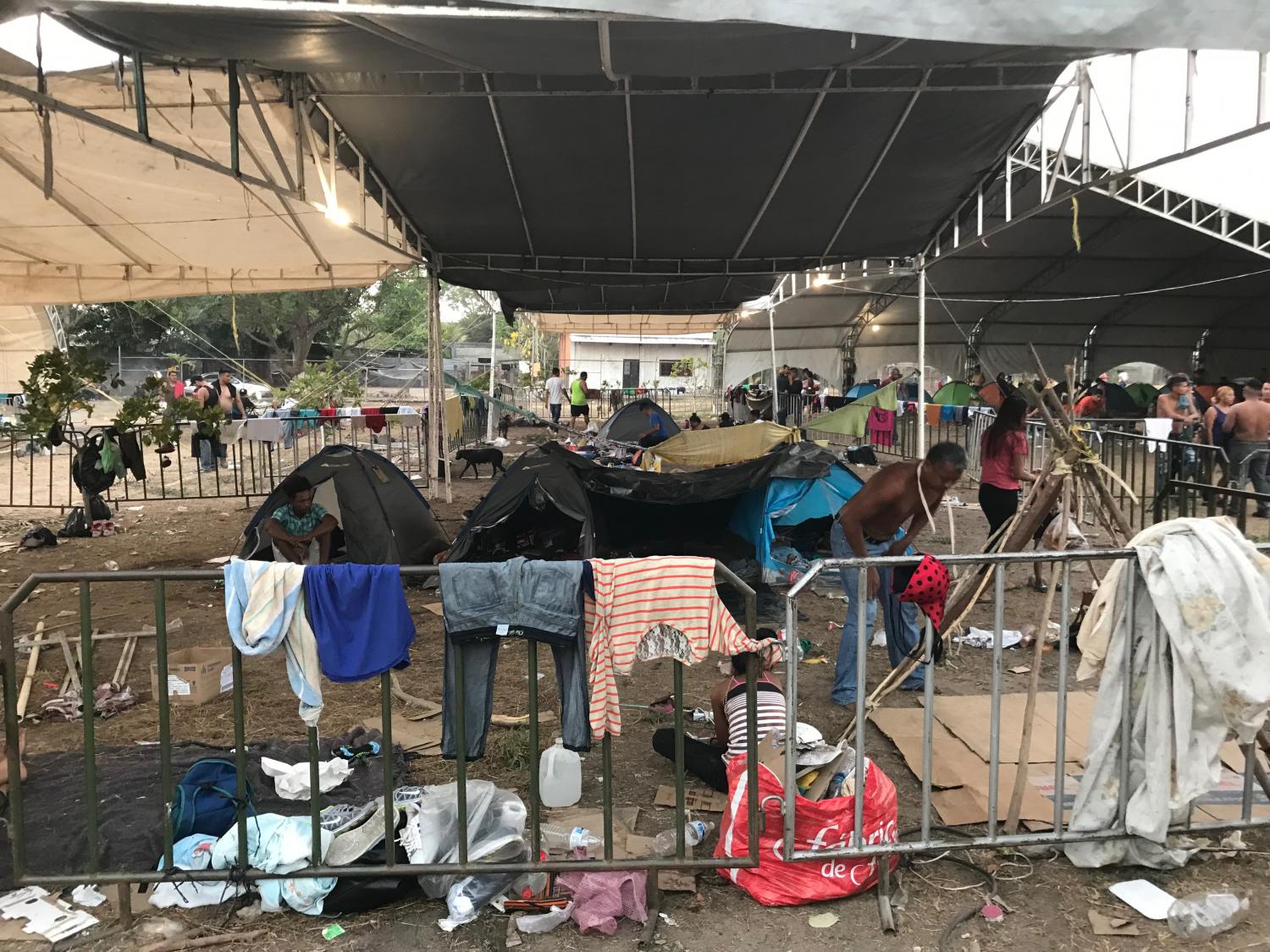 “Through no formal communication has the White House made demands from Mexico,” Ebrard said.

Still, the coincidence between Mexico’s shifting policies and Trump’s pressure is remarkable.

“Authorities are tiring, weakening and dividing migrant caravans in order to prevent their safe and orderly transit through the country,” said Abbdel Camargo, an anthropologist who studies migration at the College of the Southern Border in Chiapas.

Either way, southern Mexico is becoming the de facto wall stopping migrants from reaching the U.S. That includes Gissell Fuentes, an 18-year-old from northeastern Honduras, who also walked for three days and slept on the soccer field in Mapastepec with her brother and father while they waited for their applications to be processed.

Fuentes had fled her home in the city of Choloma after gang members killed one of her aunts and threatened to go after her next, she said. On the soccer field in Mapastepec, she and her family laid a blanket on the ground to avoid sleeping on bare grass while they figured out a way to reach the U.S. border.

“People will do whatever it takes to achieve the American dream,” she said.

They came from India, Nigeria and Cuba. They fled persecution, conflict and poverty. And they crossed oceans, mountains and rainforests. They thought they would reach the United States, but at least for now their journey has ended here: Mexico’s hot and humid state of Chiapas.

Thousands of migrants are waiting in southern Mexico — some in government shelters, others on streets or parks — with the hope of receiving a visa that would allow them to legally continue traveling. Their journeys show the lengths many will go for an opportunity to enter the United States. 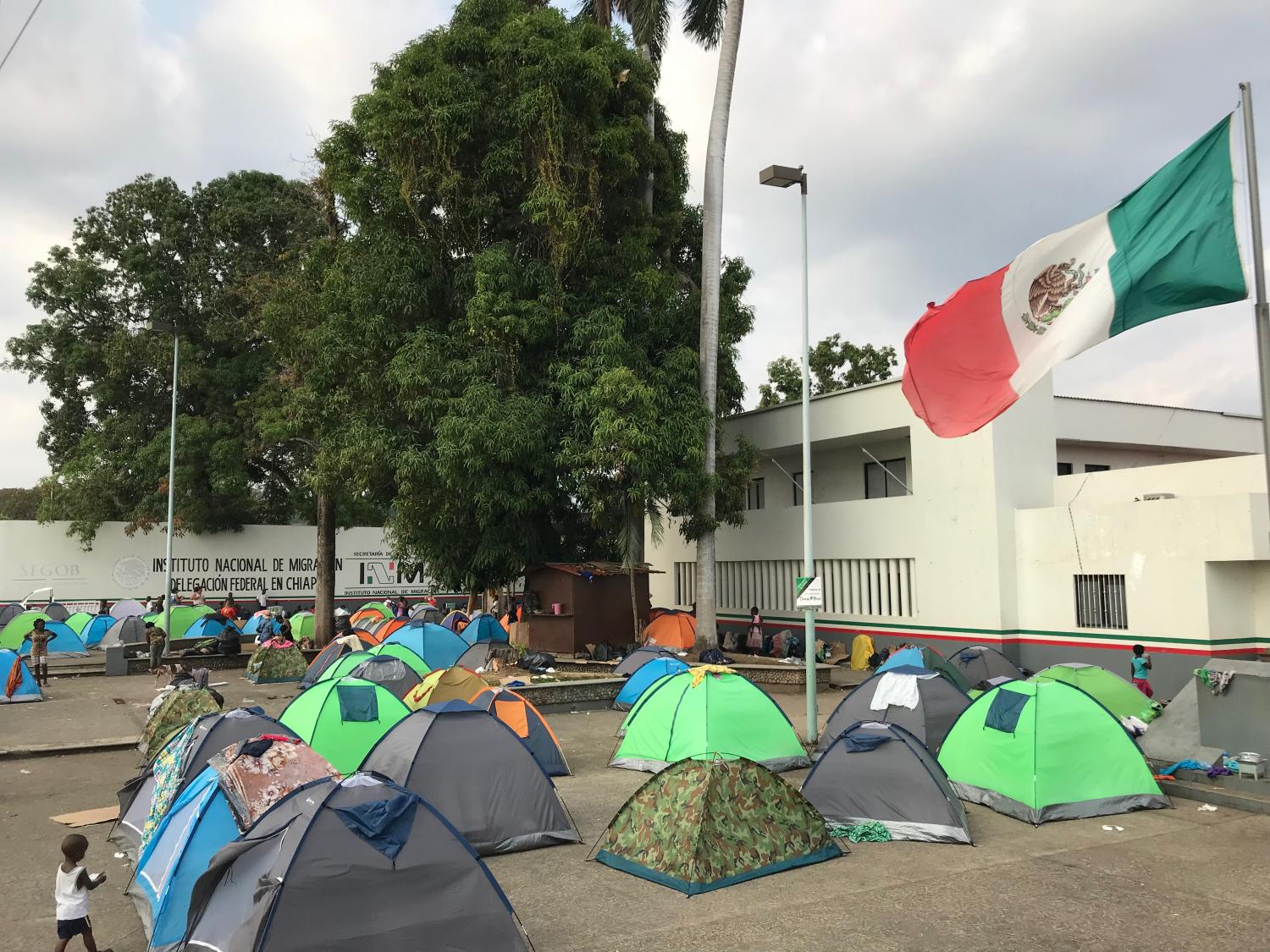 VIEW LARGER A camp outside a government shelter for migrants in the city of Tapachula, about 45 miles north of the Guatemala-Mexico border.
Jorge Valencia/Fronteras Desk

Jesia Orellano and her husband, Silvin Figueroa, like the majority here, traveled from Honduras. Orellano, a homemaker, and Figueroa, a farmer, left their home in a small town in Honduras’ department of Yoro, and traveled roughly 470 miles to the Guatemala-Mexico border by bus and foot.

They walked about 15 hours per day for three days, and Orellano fainted three times on the third day, they said. They ran out of money and reached the Mexican city of Tapachula on empty stomachs and with blistered feet. They brought with them their 8-year-old daughter, Yeimi. They left home to look for work and be able to provide for their daughter and send money to relatives who stayed behind, they said.

“I want what’s best for my daughter,” Orellano said, her husband rubbing her swollen feet. “The best thing for her is to go to school.”

The young family reached Chiapas, the state with Mexico’s lowest per-capita income, with more than 1,000 other migrants who were also walking from Central America, in what became known in late 2018 as a migrant caravan. And when they arrived, many others were already here from Honduras, El Salvador, Guatemala — and countries farther away. 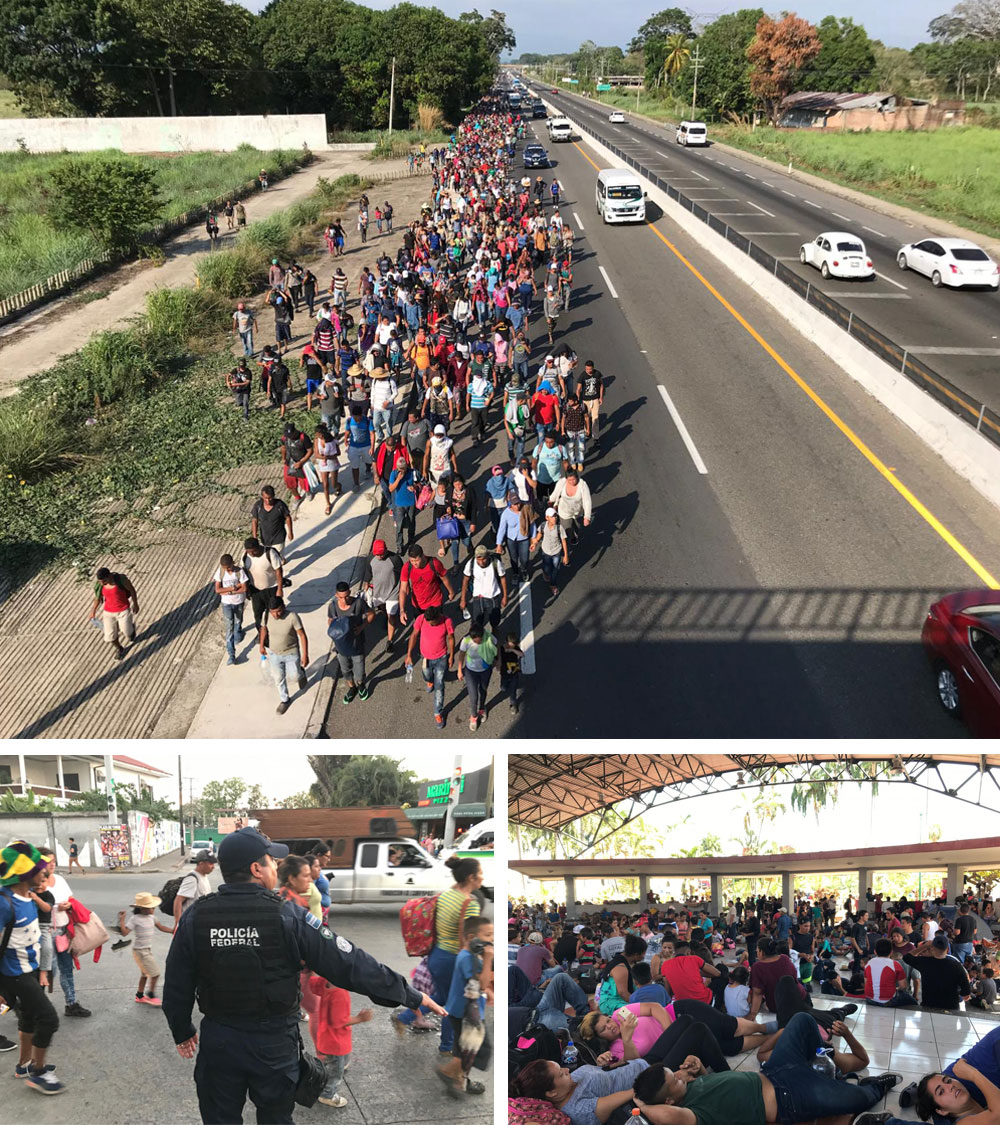 VIEW LARGER TOP: More than 800 migrants from Central America walked together from the Guatemala-Mexico border to the Mexican city of Tapachula on April 11, 2019. LEFT: Some migrants walked for 15 hours a day for several days. RIGHT: Thousands of migrants are waiting in southern Mexico with the hope of receiving a visa that would allow them to legally continue traveling.
Jorge Valencia/Fronteras Desk

Hernandez, Malik and Igor — like many others — gave different reasons for leaving: poverty, gang violence, lack of religious freedom, lack of political freedom. But they have one thing in common: they flew to South America and continued northward by land.

Igor traveled by land from Kinshasa to Angola, and flew to Cuba and then Ecuador, he said. He continued by land, with the most dangerous part of the journey being the Darién Gap, a swath of swampland and rain forest separating Colombia and Panamá.

Igar walked for 10 days through the rain forest, with little food and supplies, he said. He saw friends die. And when he came out, he continued by land to Costa Rica, Nicaragua, Honduras and Guatemala. The most difficult part of the journey, he said, became the weeks waiting for a visa in southern Mexico.

By early May, Igor had been waiting for more than a month, and it appeared the Mexican government was not prepared to grant him a visa or send him back home. So he waited in a government shelter in Tapachula.

“This,” he said, “is more difficult than all the countries we crossed to get here.” 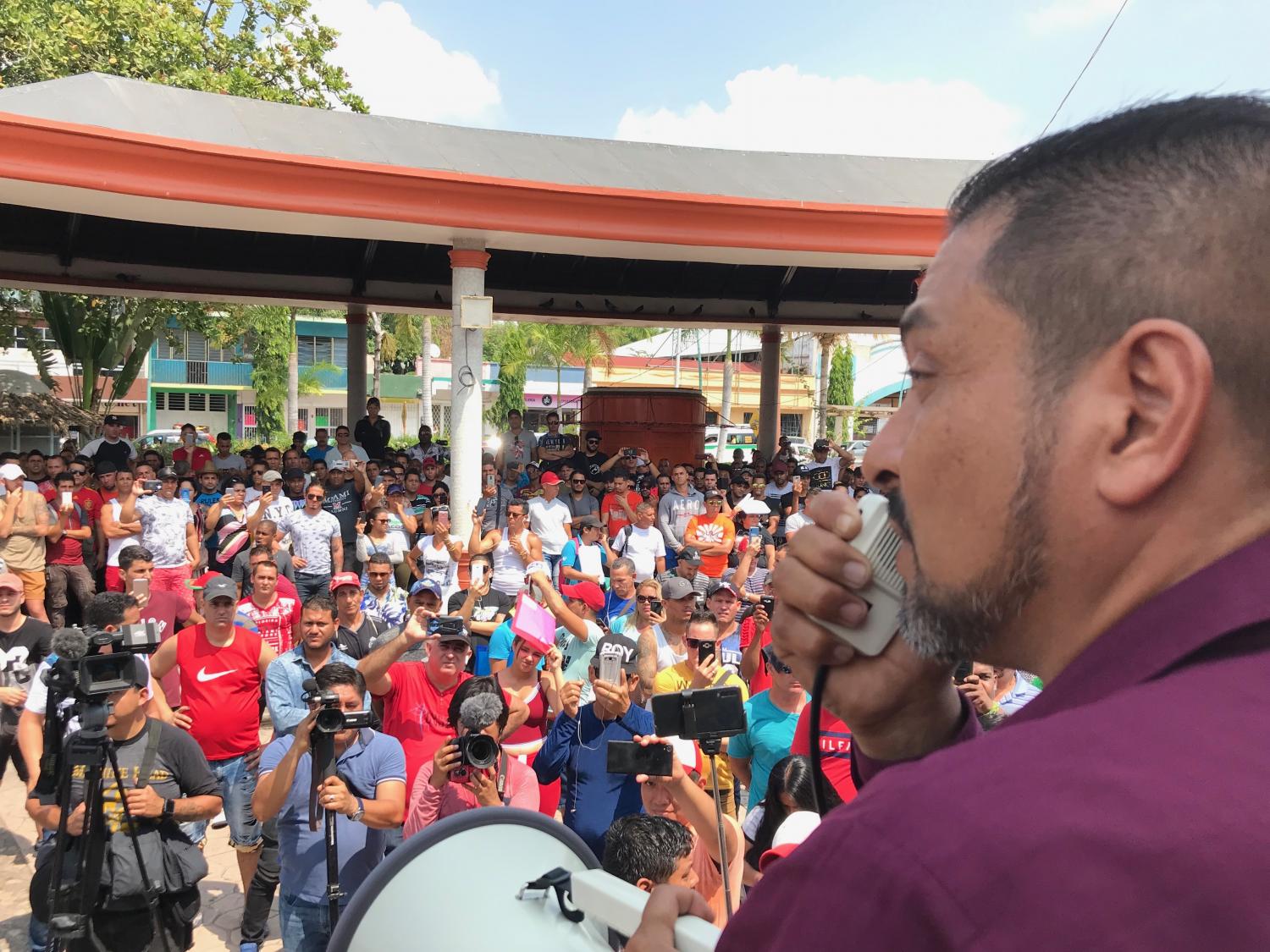 VIEW LARGER Many migrants are from Honduras, El Salvador, Guatemala — and countries farther away.

III. An Economy That Depends On an Open Border

The official bridge crossing between the border cities of Suchiate, Mexico, and Tecún Umán, Guatemala, is on most days unoccupied and unremarkable: a few dozen people walk across every hour, trailed occasionally by passengers on motorcycles or pedicabs. 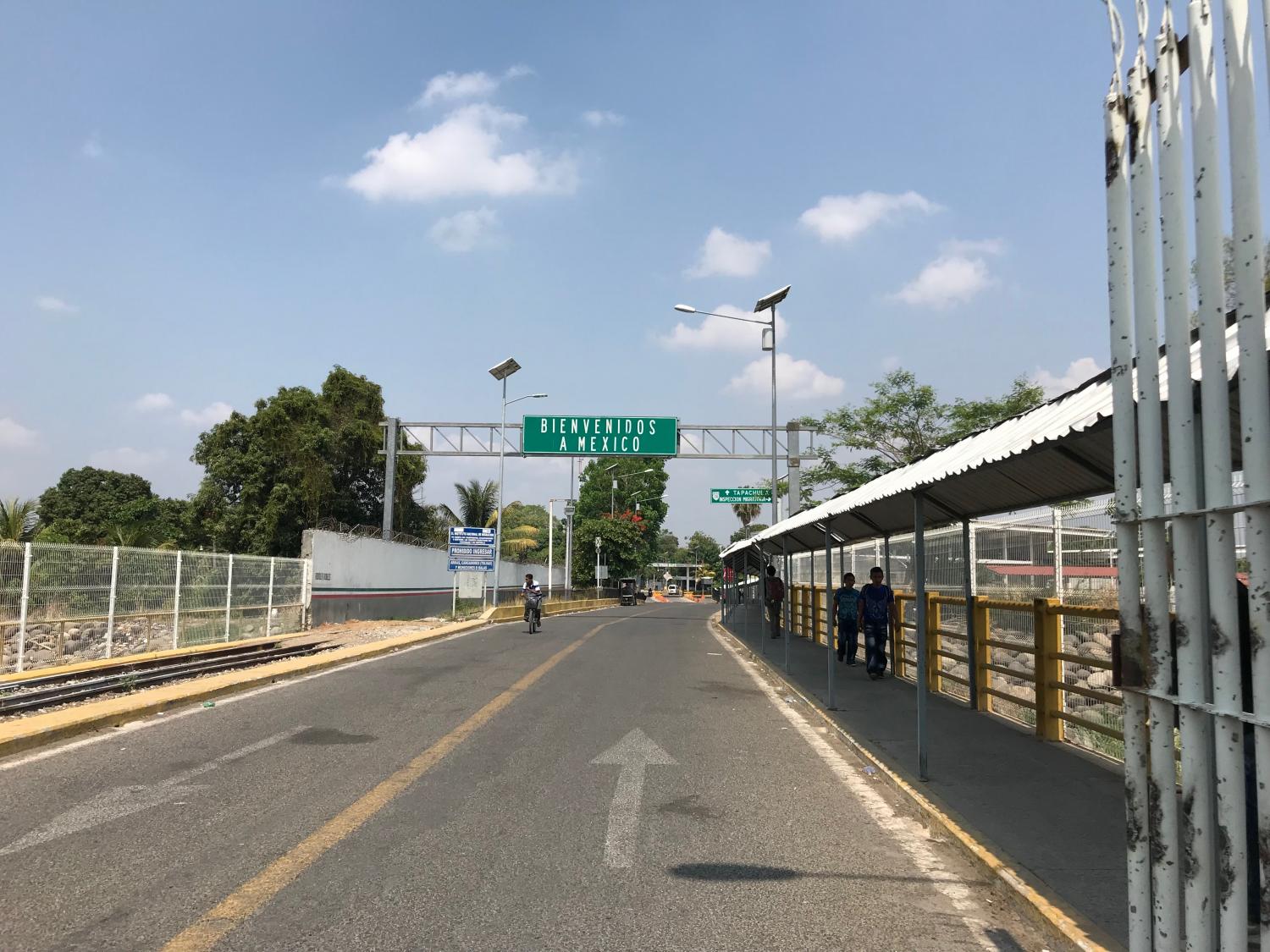 VIEW LARGER An official entry point from Guatemala into the municipality of Suchiate in the Mexican state of Chiapas.
Jorge Valencia/Fronteras Desk

The river that crosses underneath, the Suchiate River, regularly serves a higher volume of people who want to cross. Just up stream from the bridge, men push rafts of two-by-fours floating on inner tubes, from before sunrise and past night fall. They carry merchandise — from Coca-Cola bottles to sacs of grain to washing machines — that local business people buy in one country and sell for a profit in the other. They also carry commuters and shoppers who want to take advantage of a lower price that is just a five-minute raft ride away.

The economies of these towns — dependent on each other and on the relatively easy crossing across the Suchiate River — show how the free passage between Mexico and Guatemala is a way of life along this border, similar to how it once was between the U.S. and Mexico.

“In this town, we only have restaurants, bars and brothels,” said Maria Villatoro, a restaurant owner on the Mexican side of the river. “We depend on Guatemalan shoppers. If they don’t cross, we don’t sell.”

Indeed, Suchiate Mayor Sonia Eloina Hernandez Aguilar confirms retail represents the highest source of income for the municipality, which has a population of about 35,000. The surrounding state of Chiapas has Mexico’s lowest per-capita income, and its primary economic sector is agriculture. 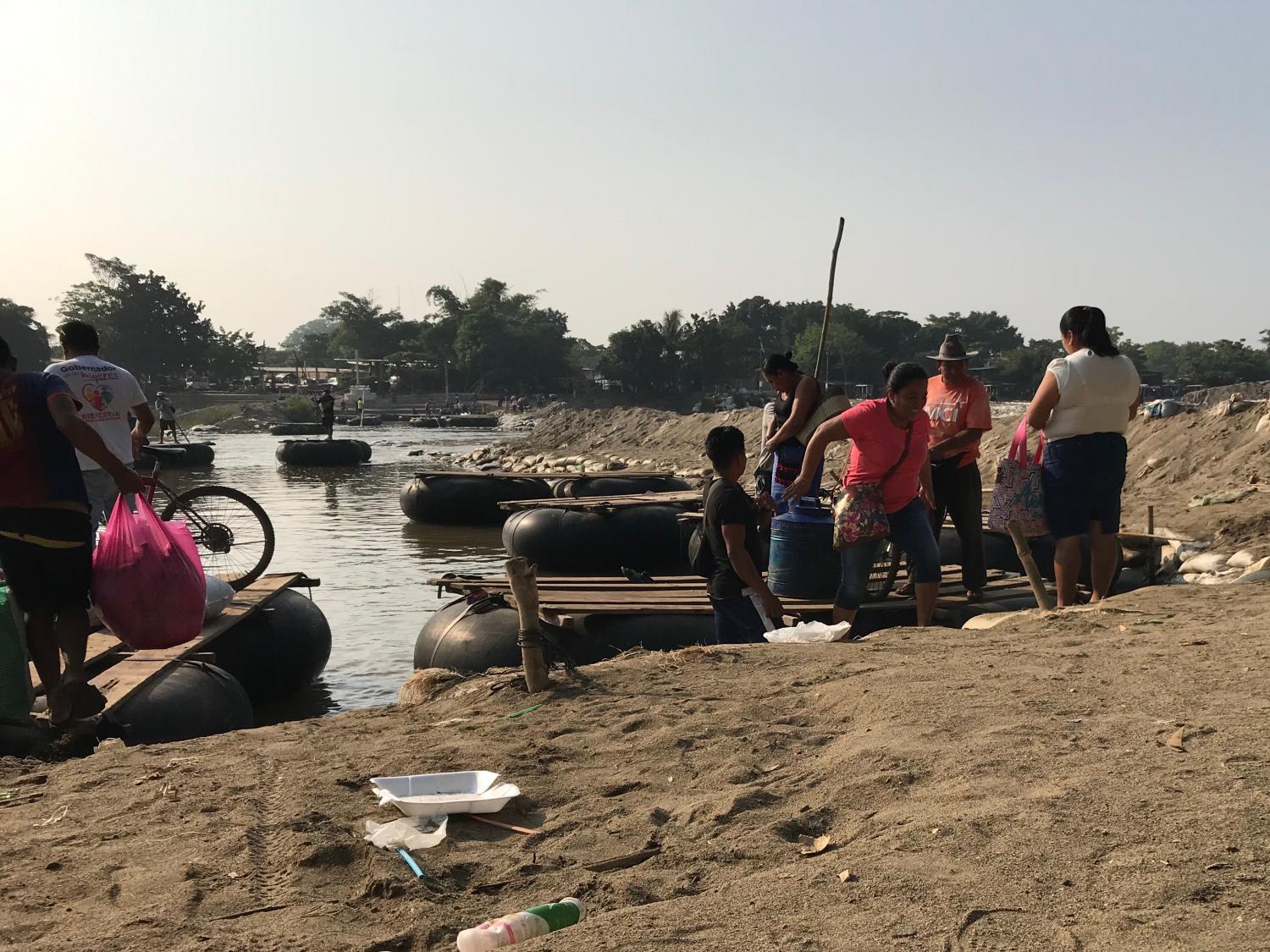 VIEW LARGER A crossing along the Suchiate River near the border cities of Suchiate, Mexico and Tecún Umán, Guatemala.
Jorge Valencia/Fronteras Desk

In Suchiate, a retail economy has formed around Guatemalan shoppers, from the men who charge about $1.25 for river crossings, to informal restaurants and bars along the rivers, to a handful of small department stores near the town center. Hernandez Aguilar, in a nod to Guatemalan shoppers and the caravans of migrants that began crossing into Suchiate shortly after she took office last October, began calling her city “The Door to Mexico.”

“Definitely,” she said. “Here in Suchiate, the door to Mexico, we don’t have any factories that generate employment.”

Eloina Hernandez says she’s been lobbying for state and federal support to build a new hospital, which would provide medical care that residents otherwise have seek 45 minutes north in the city of Tapachula. Helping migrants — some enter across the official bridge crossing, many more across the informal river crossing — is something the city is not equipped to do.

“We don’t have the resources,” she said.

Audit: Instead of migrant care, Border Patrol spent millions on equipment Arizona attorney general praises SCOTUS asylum decision Sonoran hospitals in Nogales, Guaymas reach saturation
By posting comments, you agree to our
AZPM encourages comments, but comments that contain profanity, unrelated information, threats, libel, defamatory statements, obscenities, pornography or that violate the law are not allowed. Comments that promote commercial products or services are not allowed. Comments in violation of this policy will be removed. Continued posting of comments that violate this policy will result in the commenter being banned from the site.