× CORONAVIRUS: The latest coverage and local resources regarding COVID-19 from the Arizona Public Media newsroom.
May 26, 2017

The holy month of fasting and prayers will be observed in Tucson and around the world. by Christopher Conover TWEET SHARE 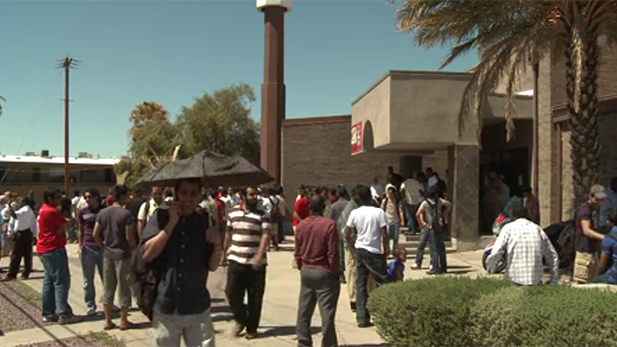 People mill about on a Friday outside of the Islamic Center of Tucson, 2011.
AZPM Staff

Muslims fast from dawn to sunset during the holy month of Ramadan, which begins Saturday. That means no daytime water for the observant during the hottest month of the year in Tucson.

Muslims take it in stride and see it as part of their faith, one of the five pillars of Islam.

“They were fasting when Islam was founded, and they were also living in really extreme desert heat but without a lot of modern facilitates that make life easier," said Sameed Irfan, a Tucsonan preparing for Ramadan.

Irfan said the fast is just part of Ramadan, and it has a significance beyond simply not taking food or drink.

Muslims break their fast each night with a meal with friends and family, Irfan said, and that is an integral part of the holy month.

Tucsonans Reflect on Hajj, 3 Years After Their Pilgrimage to Mecca Tucson Awaits New Catholic Bishop; Kicanas to Retire As Heat Returns, Officials Urge Safety
By posting comments, you agree to our
AZPM encourages comments, but comments that contain profanity, unrelated information, threats, libel, defamatory statements, obscenities, pornography or that violate the law are not allowed. Comments that promote commercial products or services are not allowed. Comments in violation of this policy will be removed. Continued posting of comments that violate this policy will result in the commenter being banned from the site.