One Year Later, Tucson Prepares to Honor a Tragedy

On the first anniversary of the January 8, 2011 shooting, Arizonans gather for vigils, memorials by Andrea Kelly Tweet

Sunday, Jan. 8, 2012 marks the first anniversary of the day six people were killed and 13 others injured in a shooting at U.S. Rep. Gabrielle Giffords’ Congress on Your Corner event.

The morning of the first anniversary of the shooting was crisp and bright, just as it was a year ago. Southern Arizonans commemorated the day by ringing bells at 10:11 a.m., the time the shooting started a year ago.

A crowd of people gathered to ring hand-held bells at the Safeway at West Ina and North Oracle roads, where the shooting happened. 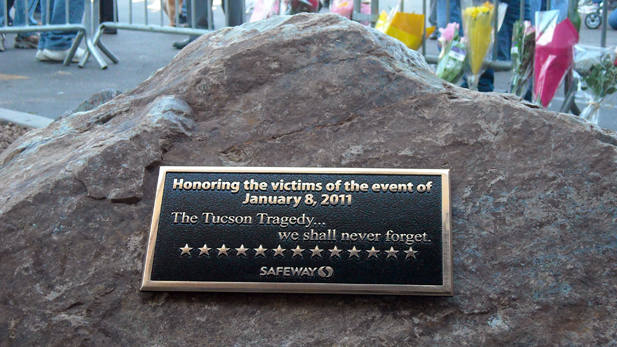 A new memorial, quietly erected in the days before the tragedy's anniversary, marks the place where six died and 13 more were wounded.
Christopher Conover

Several people who were there this year were also there Jan. 8, 2011, including Northwest Fire Assistant Chief Albert Pesquiera. He was one of the first responders that day.

“We just came to remember and celebrate what did happen,” said Buchanan, who has family members who work at the store. 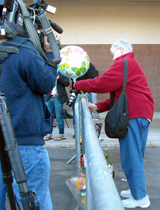 At the Safeway, a mourner ties a balloon to a railing in remembrance as reporters look on. (PHOTO: Christopher Conover)

At Congregation Chaverim at 5901 E. Second Street, Giffords’ place of worship, dozens of other members of the congregation gathered to commemorate the anniversary.

Rabbi Stephanie Aaron led the event. Members walked out of the building in procession to a sunny spot of grass, singing in Hebrew. They blew shofar horns and rang handbells at 10:11 a.m. in a symbolic practice, Aaron said.

At 10:08, Zoe Holtzman, a young member of the congregation, read a poem she wrote last year about the community.

Tucson's remembrance of January 8, 2011 will continue throughout the day with gatherings, talks and vigils. Follow the events here.

Brnovich says City of Tucson can’t require COVID-19 vaccines Brnovich sues Biden over vaccine mandate Arizona county seeks reimbursement for new voting machines
By posting comments, you agree to our
AZPM encourages comments, but comments that contain profanity, unrelated information, threats, libel, defamatory statements, obscenities, pornography or that violate the law are not allowed. Comments that promote commercial products or services are not allowed. Comments in violation of this policy will be removed. Continued posting of comments that violate this policy will result in the commenter being banned from the site.