Remembering those who died, educating about diversity, coming together by Michael Chihak Tweet 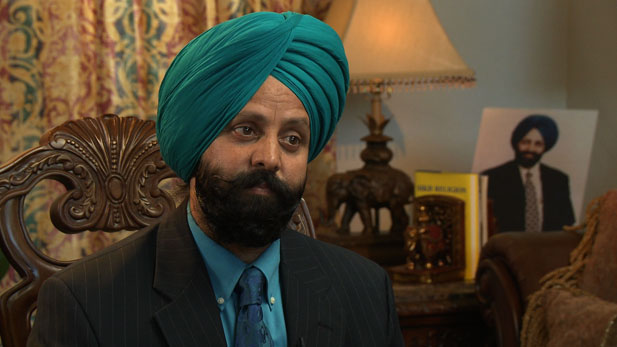 Rana Singh Sodhi, whose brother was killed when wearing the Sikh turban, says he still wears it for his religion.
AZPM

9/11, another "day that will live in infamy," is still fresh in mind and heart. Several Arizonans whose lives were intertwined with the events of that day and their aftermath speak with Arizona Week about how life has changed for them, about tolerance and about the uncertainty in our world.

Rana Singh Sodhi, a Mesa restaurateur whose brother Balbir was murdered at his Mesa gasoline station four days after 9/11 when he was mistaken for being Muslim, tells Arizona Week in an interview that he lives with the memory of his brother by working to educate others about different religions and people.

And Singh Sodhi says he doesn't want to live in fear because his Sikh religion requires that he wear a turban and a beard. The U.S. affords religious freedom, and that is why he is here.

"I take off my turban for a little while -- I'm safe? No," Sodhi says. "There are hate crime victims who do not have a turban. But their skin color: How do you change your skin color?"

Maqsood Ahmad, chair of the Board of Trustees of the Islamic Center of Tucson, says national issues, including media portrayals of Muslims as terrorists, don't seem to exist in Tucson.

"The Tucson community is a very, very tolerant and very forgiving community," Ahmad tells Arizona Week. "As a matter of fact, in Tucson we haven't had a single episode of any significance after 9/11. Thanks to all the religious community and their leaders who came forward.

" ... they volunteered their time to protect the (Islamic) center during the height of this whole issue in the very beginning."

Samuel Cohon, senior rabbi at Tucson's Temple Emanu-El, says in the same interview for Arizona Week that Tucson has seen positive change as a result of interfaith conversations and partnerships.

John Kavanagh, an elected member of the Arizona House of Representatives who is a retired New York-New Jersey Port Authority police detective, knew officers involved in the rescue efforts at the World Trade Center, including many of the 37 Port Authority officers who died.

"I knew many of the officers, the 37 Port Authority officers, who died rescuing people that day," Kavanagh says in an Arizona Week interview. "So memories of my past associations with them come to mind."

Tucsonans Remember 9/11 Attacks with Flag Displays Documentary exploring death and disappearances along South Texas border comes to Tucson Arizona reports 3,234 new COVID cases, 10 deaths
By posting comments, you agree to our
AZPM encourages comments, but comments that contain profanity, unrelated information, threats, libel, defamatory statements, obscenities, pornography or that violate the law are not allowed. Comments that promote commercial products or services are not allowed. Comments in violation of this policy will be removed. Continued posting of comments that violate this policy will result in the commenter being banned from the site.