"Not a Single Day Without a Job" 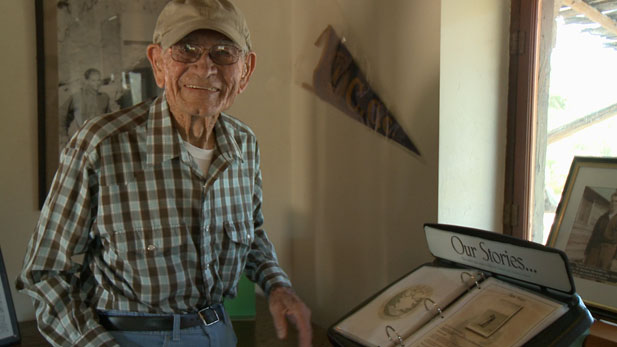 Out of the economic chaos of the Great Depression emerged the Civilian Conservation Corps (CCC), which forever changed both the country and the young men who enrolled.
AZPM

Elson Alvarez was only 19 years old when he joined the Civilian Conservation Corps in 1936. He was stationed in St. David, Arizona, where he eventually was promoted to assistant camp engineer.

“The reason I joined the CCC was because of the Great Depression,” Alvarez says.

His family, like many throughout America at the time, was struggling to survive the Depression, and he saw the CCC as the only way to further his education and help provide for their needs.

Basic pay for an enlistee was $30 a month -- which Alvarez says was a nice sum of money for a young man at the time -- and the motivation to move up the ranks was strong.

“If you start working hard, you know, you learn a lot of things,” Alvarez says, “then you could become assistant engineer, which was $36 a month.”

Twenty-five dollars of an enlistee’s pay went directly to the family.

“At that time everything was so cheap, that $25 would go a long way,” Alvarez says. "I was very happy I could help take care of my siblings for five and a half years.”

J.J. Lamb is an historian and preservationist who has documented the history of the CCC in Arizona through photographs, slides, letters, and oral histories. She says the CCC is one of the more successful components of the New Deal-–FDR’s master plan for economic recovery.

Martie Maierhauser is the director of Colossal Cave Mountain Park. She says the park owes a tremendous debt of gratitude to the men of the CCC. From 1934 to 1937, the young men of the CCC constructed the limestone retaining wall and Headquarters buildings.

Inside the cave, they widened passages, laid flagstone pathways, installed handrails and lighting, and enlarged the entrance.

“These young men were lost,” says Maierhauser. “Their families were in dire straits.”

Yet through the CCC, she says, many of them were able to get high school diplomas, learn a trade, or an art, and “above all, they learned a work ethic that has stood them in good stead the rest of their lives.”

For Elson Alvarez, the memories of his experience as part of the CCC represent a life-changing experience that carried him through an entire career.

The New Deal programs instituted bold changes in the federal government that were meant to energize the economy and create an equilibrium to help bolster the needs of citizens. Out of this economic chaos emerged the Civilian Conservation Corps (CCC). Its purpose was two-fold -- conservation of our natural resources and the salvage of our young men. (VIDEO: AZPM)

For more on the Civilian Conservation Corps, visit our CCC web feature, A Legacy in Stone.

Arizona sees boost in revenue from tribal casinos "Confessions of a Vintage YA Book Reader". Brnovich says City of Tucson can’t require COVID-19 vaccines
By posting comments, you agree to our
AZPM encourages comments, but comments that contain profanity, unrelated information, threats, libel, defamatory statements, obscenities, pornography or that violate the law are not allowed. Comments that promote commercial products or services are not allowed. Comments in violation of this policy will be removed. Continued posting of comments that violate this policy will result in the commenter being banned from the site.