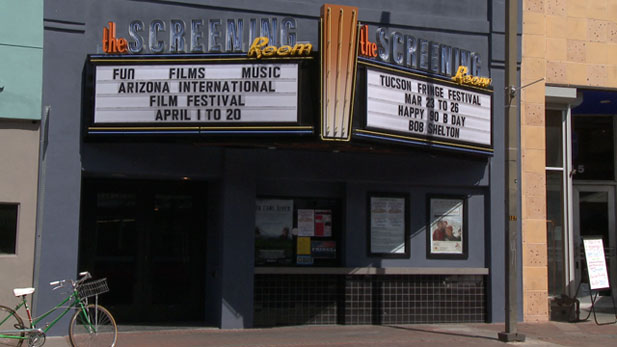 The 2011 Arizona International Film Festival is being held in Tucson at the Screening Room in April.
AZPM

The Arizona International Film Festival kicks off this week and organizers say the event promises to be bigger than ever. Mia Schnaible is director of marketing and development for both the film festival and The Screening Room.

She says the festival has evolved over the years, but it has always maintained its mission of providing audiences with the best independent films from around the world.

The 2011 Arizona International Film Festival will take place April 1-20 at The Screening Room, Crossroads Festival, The Fox Theatre, The Art Institute of Tucson and other venues throughout Tucson. Over 110 films representing 20 countries will be featured in Arizona's longest running and largest film festival.

The 2011 Arizona International Film Festival is being held in Tucson at the Screening Room in April. Luis Carrion has a preview of some of the films featured at the festival. (VIDEO: AZPM)
MORE: Arts and Life, Culture, News

Four Day Film Fest Explores Current Crop of Mexican Cinema The Rogue Theatre presents "A White Heron". Chasing legends in the desert.
By posting comments, you agree to our
AZPM encourages comments, but comments that contain profanity, unrelated information, threats, libel, defamatory statements, obscenities, pornography or that violate the law are not allowed. Comments that promote commercial products or services are not allowed. Comments in violation of this policy will be removed. Continued posting of comments that violate this policy will result in the commenter being banned from the site.