× CORONAVIRUS: The latest coverage and local resources regarding COVID-19 from the Arizona Public Media newsroom.
December 22, 2010 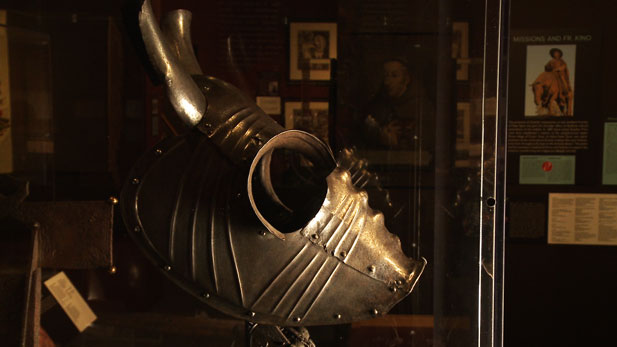 Michael M. Brescia is Associate Curator of Ethnohistory at the Arizona State Museum and Associate Professor at the University of Arizona's Department of History. He's also the lead curator of ASM's exhibit entitled Many Mexicos: Vistas de la Frontera. In this video he guides the viewer through the expansive exhibit, and offers some insight into the way the exhibit is structured.

Information Provided from the Arizona State Museum: This exhibition interprets the broad sweep of Mexican history from the perspective of the borderlands—a vast, contested space that was the outer rim of Mesoamerica in the Pre-Columbian period and later evolved into the northern frontier of Spanish-Indian relations following the conquest of Mexico. The establishment of the international border between the United States and Mexico in the mid-nineteenth century set the stage for a new set of cross-cultural contacts and commercial exchanges. The debates currently raging over immigration by no means diminish these relationships. In so many ways, the history of Arizona reflects the history of Mexico.

Enjoy hundreds of objects and artwork that illustrate the varied Mexican histories, including a Maya ritual corn vessel, Spanish colonial retablos, Santa Anna's sword and uniform, Maximilian's ring and Carlota's brooch, and a sombrero that may well have belonged to Pancho Villa.

Rogue Radio presents Kate Chopin's “Désirée's Baby” What living in a world made from chemicals means for "The Sensitives". Composer Steve Roach believes "The music is the medicine".
By posting comments, you agree to our
AZPM encourages comments, but comments that contain profanity, unrelated information, threats, libel, defamatory statements, obscenities, pornography or that violate the law are not allowed. Comments that promote commercial products or services are not allowed. Comments in violation of this policy will be removed. Continued posting of comments that violate this policy will result in the commenter being banned from the site.