The Bodies Exhibit ended it’s 21 week run at the Rialto Building downtown last night. Members from the community opposed to the exhibit on ethical grounds held a final vigil, and ceremony to honor the bodies on display.

It was a quiet ceremony that took place at dusk in front of the Rialto Building. It served as a final celebration for those that have attempted to raise awareness over the questionable origin of the Chinese bodies on display in the Bodies exhibit. ABC News Exposé on Bodies Exhibit 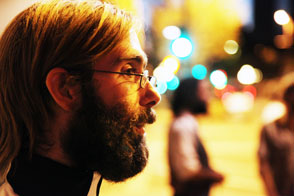 Jonah Clarke spoke to the small crowd assembled along the sidewalk in front of the Rialto. He says the company that put on the Bodies exhibit --PREMIERE EXHIBITIONS has acknowledged that it cannot fully account for the origin of the bodies. He thinks it’s unfortunate that Tucson has allowed the exhibit to take such a prominent place in downtown largely unchallenged. "I think it’s important for us to stand here today and at least acknowledge these people as people with beliefs and values and things that they would have preferred their bodies to have to go through after their death."

Candles, flowers, and incense are placed on a fake coffin outside the Bodies exhibit, while Jonah Clarke speaks with visitors.

Clarke's statement: "There is the distinct possibility that they were political prisoners, or people of conscience that believed other than what their government wanted them to believe… so they were imprisoned and killed… and then their bodies were sold… the exact “where they came from” is unknown. The Chinese police department will not give any information… the call them unclaimed bodies."

The Bodies Exhibit will end it’s 21 week run at the Rialto Building downtown this Sunday. Activists opposed to the exhibit on ethical grounds are planning a ceremony to mark the occasion.

The Bodies exhibit opened at the Rialto block on May 15th, and Fred Woodworth has quietly held a daily vigil in protest of the exhibition that he says is a violation against humanity. "The primary thing is that the bodies come from China and there is no signed release that they willed their bodies to science." 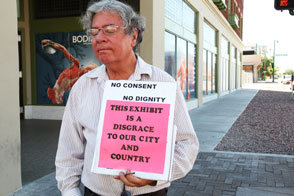 Woodworth points to investigations that have led to the banning of the exhibit in other communities as proof that the company cannot properly account for the origin of the bodies. He thinks the city’s drive to revitalize the downtown area may have contributed to the lack of interest in challenging the company that operates the exhibit --Premiere Exhibitions.

Woodworth says he finds it troubling that "children are brought here without any consideration for how important this is." He says that he's had mixed results trying to inform the public but he's troubled by the antagonistic reactions that he's received. "It’s not a joke, you shouldn’t be laughing, (people) should think about it." 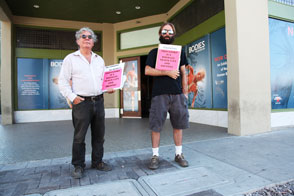 Jonah Clarke has joined in the daily vigils, and he says he’s glad that Sunday is the final day of the Bodies Exhibit. "A public ceremony is planned at 5:30 pm outside the building with music, art, and members from the community opposed to the exhibit," he says.

What living in a world made from chemicals means for "The Sensitives". How the arts survive challenging times. Composer Steve Roach believes "The music is the medicine".
By posting comments, you agree to our
AZPM encourages comments, but comments that contain profanity, unrelated information, threats, libel, defamatory statements, obscenities, pornography or that violate the law are not allowed. Comments that promote commercial products or services are not allowed. Comments in violation of this policy will be removed. Continued posting of comments that violate this policy will result in the commenter being banned from the site.