For the first time, the Postal Service features mariachi musicians on stamps

For some in the Latino community, it's recognition of how their heritage and culture are part of the American fabric. by NPR/Gabriel J. Sánchez Tweet 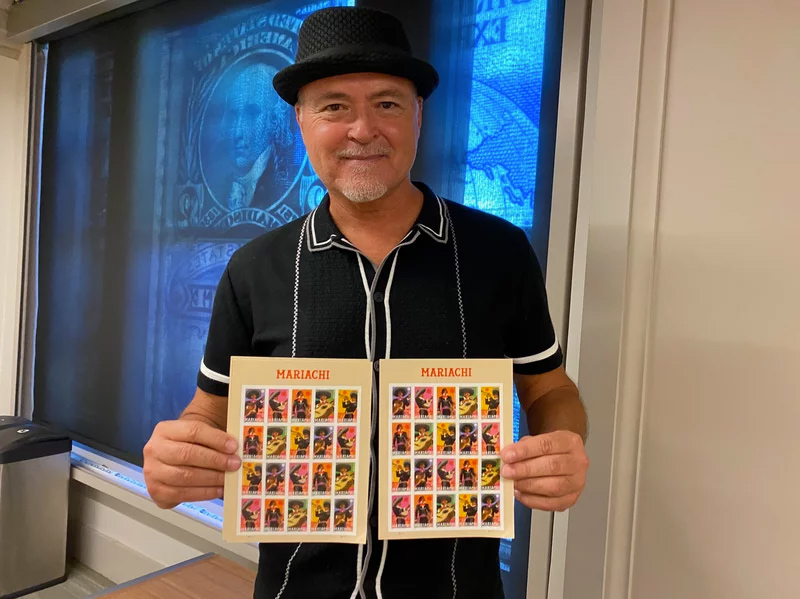 Rafael López poses with his mariachi stamps in a classroom at the Smithsonian's National Postal Museum. The set was launched in August.
Gabriel J. Sánchez/NPR
When the Postal Service asked Rafael López to design a commemorative stamp representing Latin American culture in the United States, he knew exactly what to show: a mariachi band.

And he knew just one stamp was not going to be enough.

"The contribution of mariachi music is huge. We cannot just recognize it with one stamp. We need to create at least a series of five," the Mexican American artist told NPR at the launch this month in the Smithsonian's National Postal Museum.

"So I went back to the director and I said, what if we actually have five different musicians? You can't fit five of them in one little step. I don't think that's enough honor, you know, to mariachi music."

It's the first time a mariachi band is featured on U.S. stamps, according to the Postal Museum. And for some in the Latino community, it's recognition of how their heritage and culture are part of the American fabric. López himself splits his time between San Miguel de Allende in Mexico and San Diego, California. 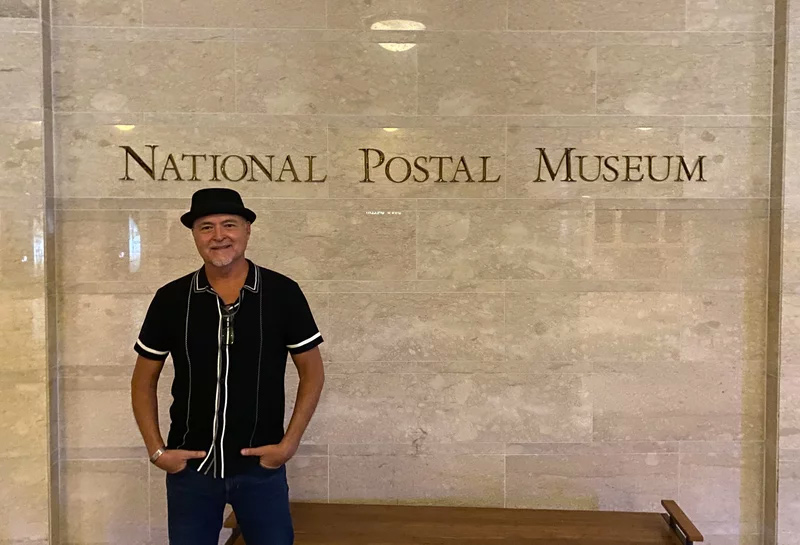 López stops under the museum marquee while taking a tour before the launch event.
Gabriel J. Sánchez/NPR
He used his upbringing in Mexico City as part of the inspiration for the stamps, especially the band members and the vibrant colors that fill the stamps, which have an initial print of 18 million sets.

López said he wanted to put the focus on the features of the characters depicted on the stamps, leaving a non-descript background with the pastel-colored homes of Mexican antiquity.

"The background is very simple. It just resembles some kind of a Mexican town," he said. "But if you see it very closely, it's just like color shapes. And I wanted to pay focus on the actual expression of the singers."

The features López focused on were more passionate expressions made by those musicians at the height of their harmony. The faces of the band members compete for space on the stamps with their uniforms and instruments. 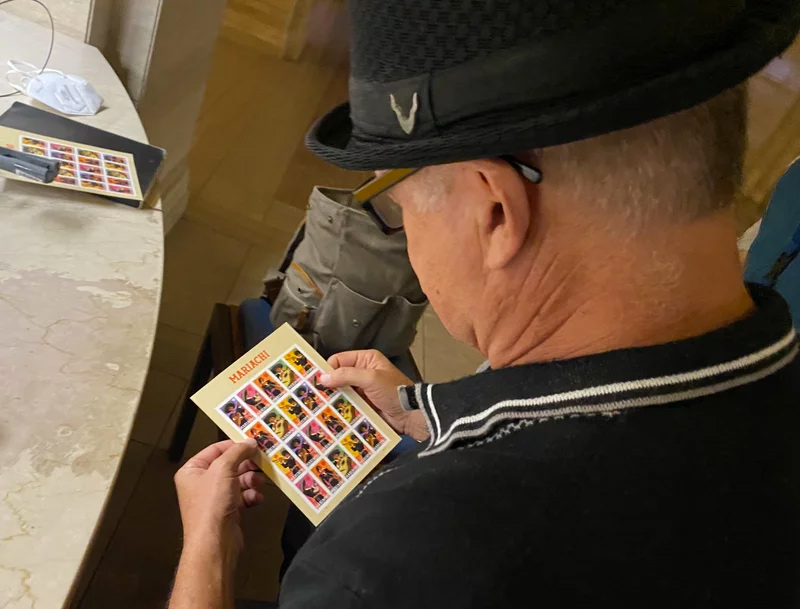 López signs a set of stamps at the museum.
Gabriel J. Sánchez/NPR

The centerpiece is the leader of the group, a violinist holding her instrument in her left hand and her sombrero in the right as she belts out her operatic ballads. López set that up by design.

"I love when a female mariachi singers are out there. I also wanted it to be center stage, and I just wanted also to have a little bit of variety, you know, that you can tell that not only is she very talented with the violin, but she can also put it down and just belt away a great song."

The creative process was not quick

It took two years of development before the set launched. Each stamp is priced at 60 cents and will carry on a cultural legacy forever.

The depictions of the band members comes from a long list of approved models, images and illustrations provided by the Postal Service.

But when one of the models became unavailable, López used his nephew's face to create the musician holding the vihuela — a stringed instrument that resembles a guitar.

"I said, ask your brother to take photos of different angles of your face and you pretend to be playing the violin," López said. "And after about 30 or 40 photos, I picked the best one." 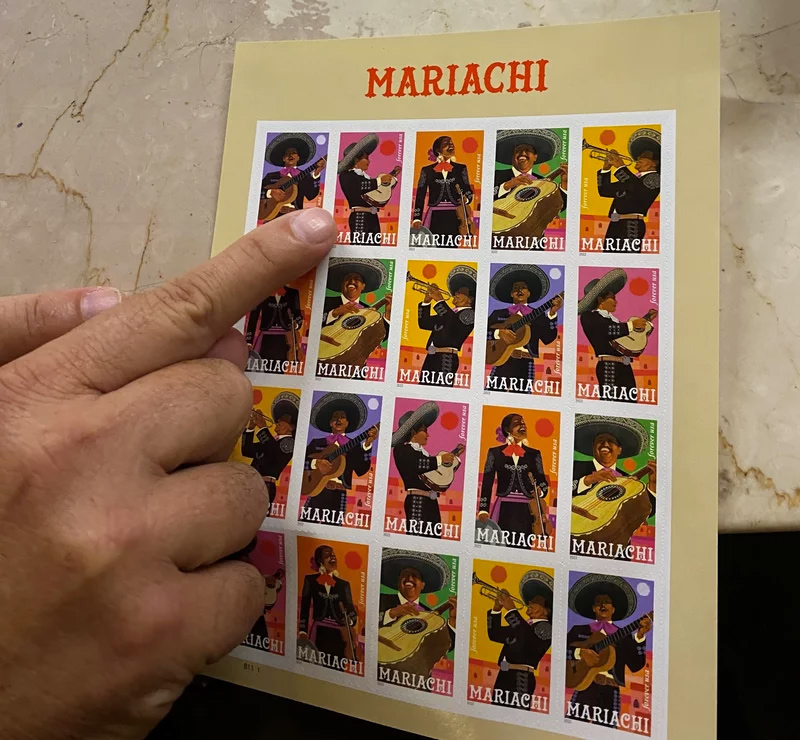 López points to a set of his mariachi stamps.
Gabriel J. Sánchez/NPR

Mariachi comes to life at the museum

López was not the only artist at the launch event.

Cañas y su Mariachi de Oro filled the museum's halls with music, entertaining visitors and volunteers. The five-piece band, based in Northern Virginia, played favorite pieces like Cielito Lindo and El Mariachi Loco Quiere Bailar, but the crowd of mostly families were wowed when the Pajaritos a Bailar, slowly transitioned to a rendition of Baby Shark. 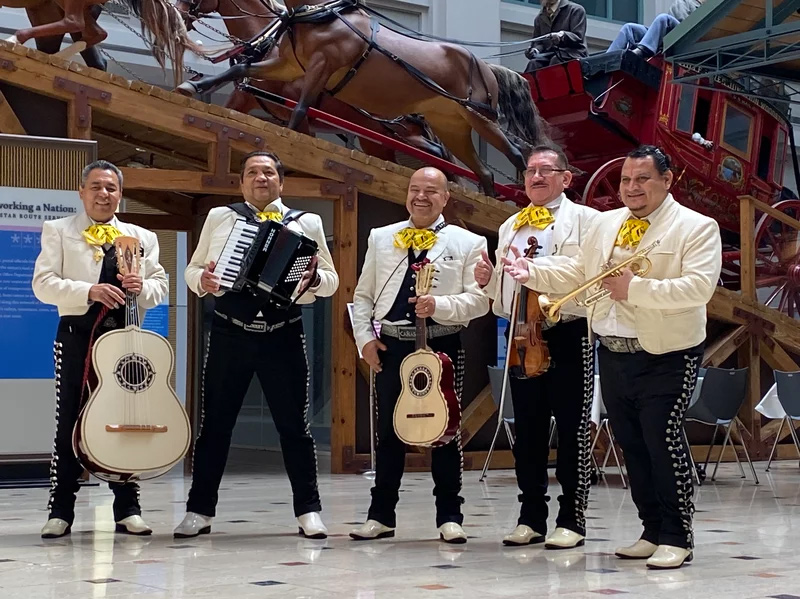 Members of Cañas y su Mariachi de Oro prepare to play for the crowd at the museum.
Gabriel J. Sánchez/NPR

"Es un honor para nosotros," he said. It's an honor for us.

López said rhythms and beats of the music — playing in an institution of American history — are key to a great mariachi sound anyone can enjoy, regardless of whether they understand Spanish.

"Before you know it, everybody's celebrating life and patting each other in the back. So there's that universal quality that the mariachi music has that you just can't help but feel." 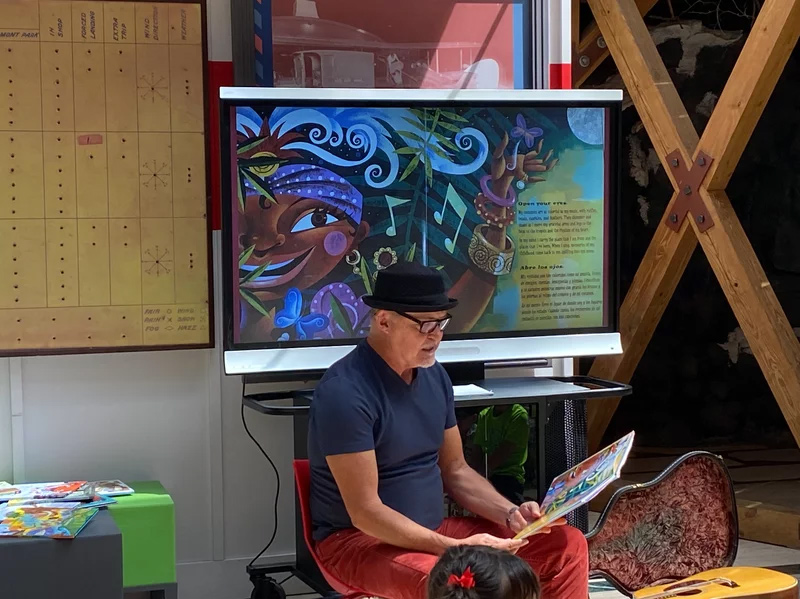 Return of rare Ojibwe horse lifts spirits — but still needs help My familia of dancers, a legacy of love for the craft Where the Colorado River crisis is hitting home
By posting comments, you agree to our
AZPM encourages comments, but comments that contain profanity, unrelated information, threats, libel, defamatory statements, obscenities, pornography or that violate the law are not allowed. Comments that promote commercial products or services are not allowed. Comments in violation of this policy will be removed. Continued posting of comments that violate this policy will result in the commenter being banned from the site.