She simply wanted to see if she could do it. by NPR/Alejandra Marquez Janse, Patrick Jarenwattananon, Adrian Florido Tweet 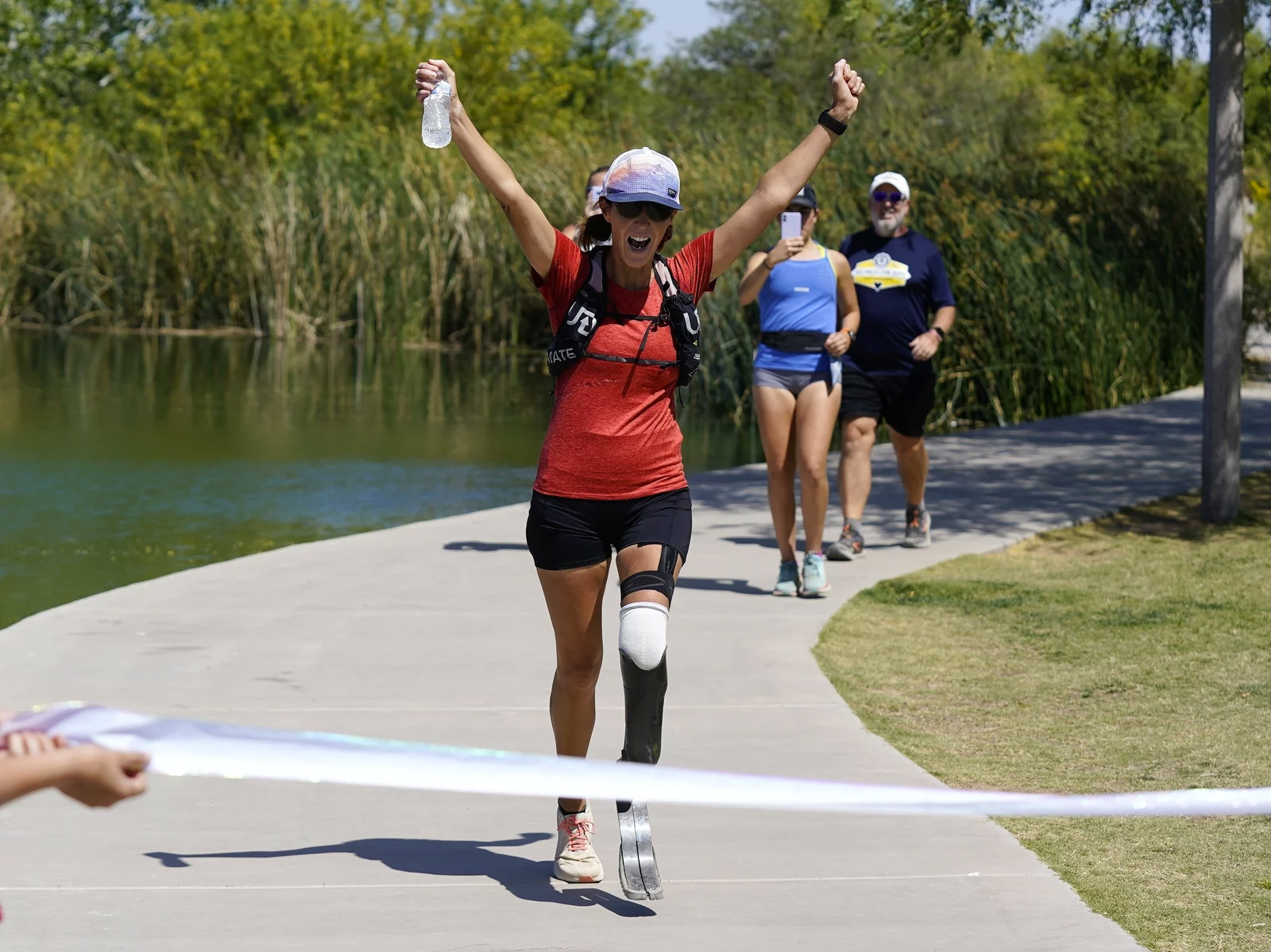 In total, she ran 104 marathons in 104 days, with her last race on Saturday. If it's confirmed by Guinness World Records, that would be a new world record. And she did it all with one leg and a prosthesis.

But what drove her to set a new record? She simply wanted to see if she could do it, she said.

"The previous person that had done it, I had looked at it and I'm like, 'Well, she can do it. And she was an able body and I was like let me see if I could do it on a prosthetic and see what happens," Hunt-Broersma said. "And it was an interesting journey because I wanted to push the limits and see how far, but also see how far I could do it and if my prosthetic would actually last."

There are a lot of factors that go into running as an amputee, Hunt-Broersma said, and she wasn't sure if she would make it past the 30 mark.

"I thought it would be a great way to inspire others to push your limits because I truly believe that we're stronger than what we think," she said. "And I've been so pleasantly surprised that my body's held up, everything's held up and I've made it to 104."

One might think that with a running streak like that, Hunt-Broersma has been running her entire life. But she actually did not pick up the sport until after her left leg was amputated below the knee in 2001 due to a type of cancer called Ewing sarcoma.

"When you lose your leg, there's an element of you that you become a little bit more stubborn because people tell you there's so many things you you can't do. You can't do this, you can't do that. And running was one of those because it's really complicated."

Amputee runners can't use a regular prosthetic leg, they need a running blade. Hunt-Broersma has two, but she was only able to run with one during her streak because of swelling she experienced in her amputated leg that made it impossible to connect to one of the blades. 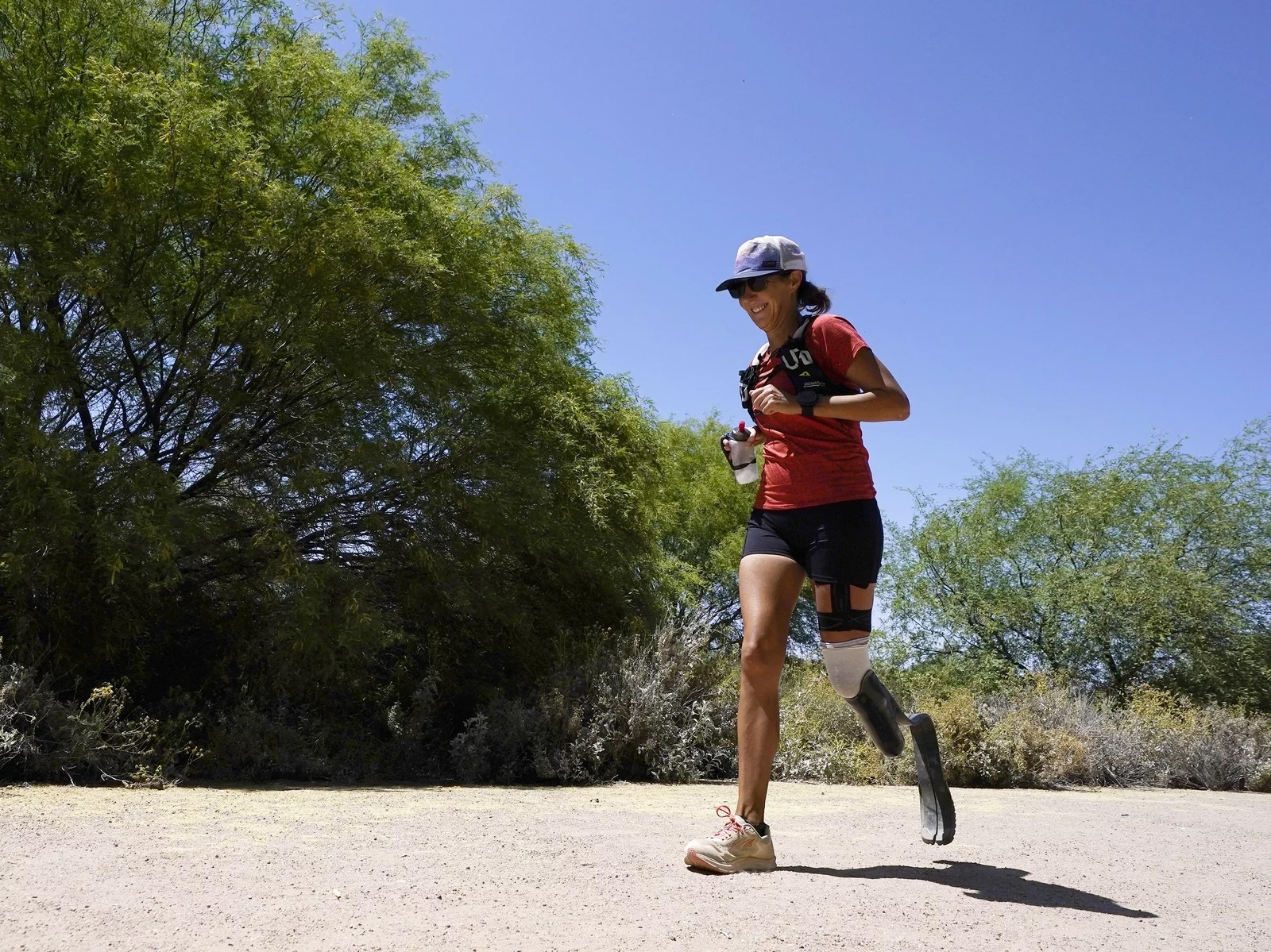 Hunt-Broersma wasn't always a runner. She didn't pick up the sport until after her left leg was amputated in 2001. But since then she said she's learned just how strong she is.
Ross D. Franklin/AP

This, she said, is just one factor that many amputees have to consider when running. But even with the swelling and friction that sometimes occurs, she has been able to push through it and continue her stride.

"Running truly has changed just me," Hunt-Broersma said. "It's just changed my perception of how I see myself as an amputee. It makes me feel strong. It makes me feel fearless. I can just push limits and it's just been phenomenal."

As much as she loves the sport, there was at least one point during her 104-day streak that she considered calling it quits.

"I was tired. I just didn't want to do it anymore. And I'm like that's not a good reason to quit," she said. "I basically sucked it up, pulled myself together and continued. And then you kind of get back into the routine and then it's like, OK, I'm getting there. I'm moving forward and it's going to be OK. And then you kind of just focus on each step, like each day, and you just kind of get through the miles that way."

All together, Hunt-Broersma ran 2,724.8 miles. During that time she's had a lot of time to think and has learned a few things about herself.

After her impressive feat, Hunt-Broersma is taking two weeks off of running before she begins training for her next big race – a 240-mile ultra marathon in Moab, Utah in October.

Sony photo awards: Computers on horseback, magnificent mountains, bathing elephants Here's how to watch the total lunar eclipse on May 15 Watch: Congressional District 6 Republican Debate
By posting comments, you agree to our
AZPM encourages comments, but comments that contain profanity, unrelated information, threats, libel, defamatory statements, obscenities, pornography or that violate the law are not allowed. Comments that promote commercial products or services are not allowed. Comments in violation of this policy will be removed. Continued posting of comments that violate this policy will result in the commenter being banned from the site.