A letter from a second-grader — written on the dog's behalf — may have been the ticket home. Tweet 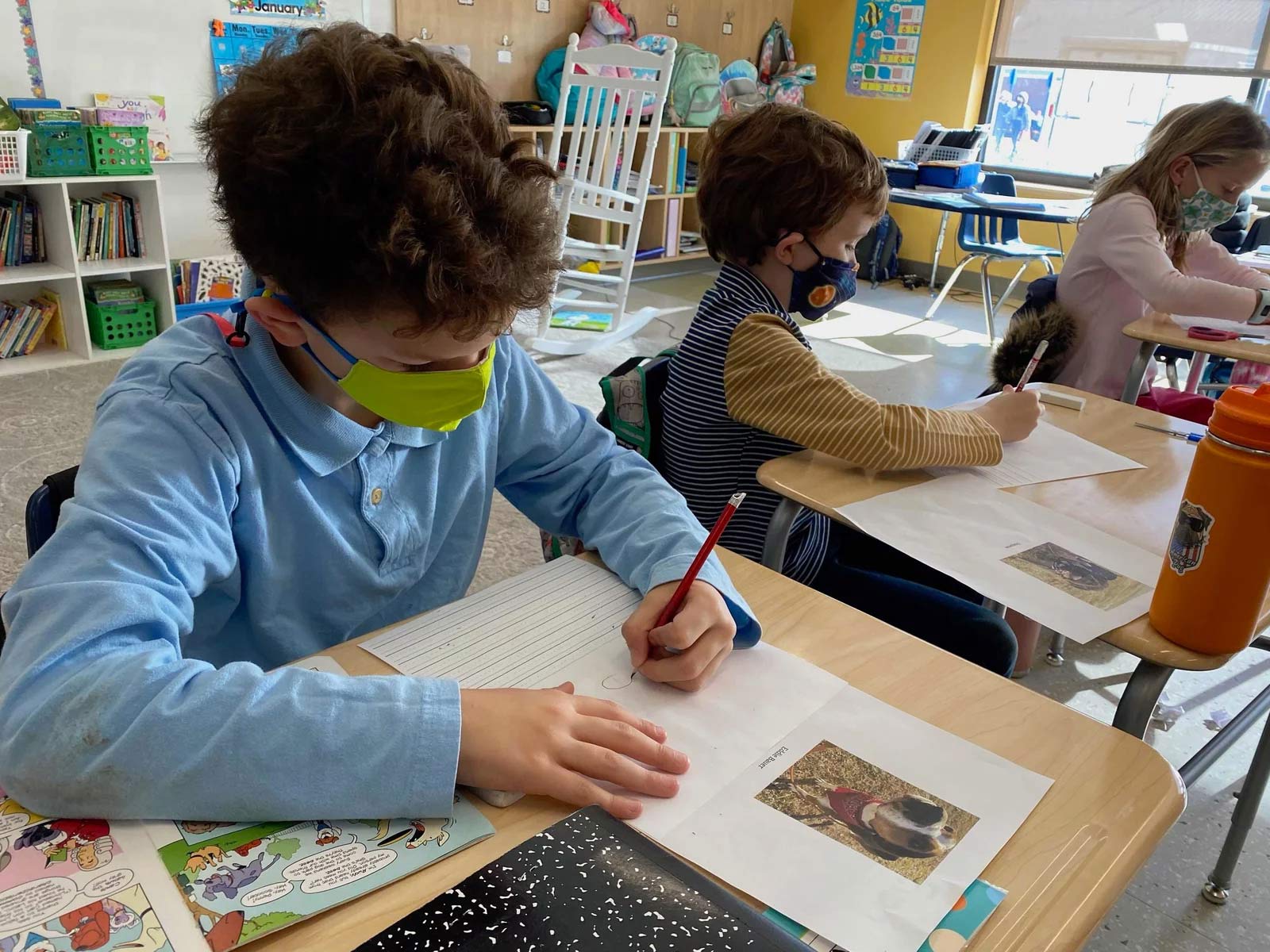 Sleigh Ride is a chubby, blue-gray pitbull, and she'd been hanging around Richmond Animal Care and Control's shelter for quite awhile. But a letter from a second-grader — written on the dog's behalf — may have been the ticket home.

"Do you want to adopt me?" the letter read. "You can snuggle with me! I promise that I will be a good dog. You can even sleep with me if you want!"

Within about 10 days of posting the letter alongside the kennel, someone adopted Sleigh Ride into a fur-ever home, said Christie Chipps Peters, director of Richmond Animal Care and Control. 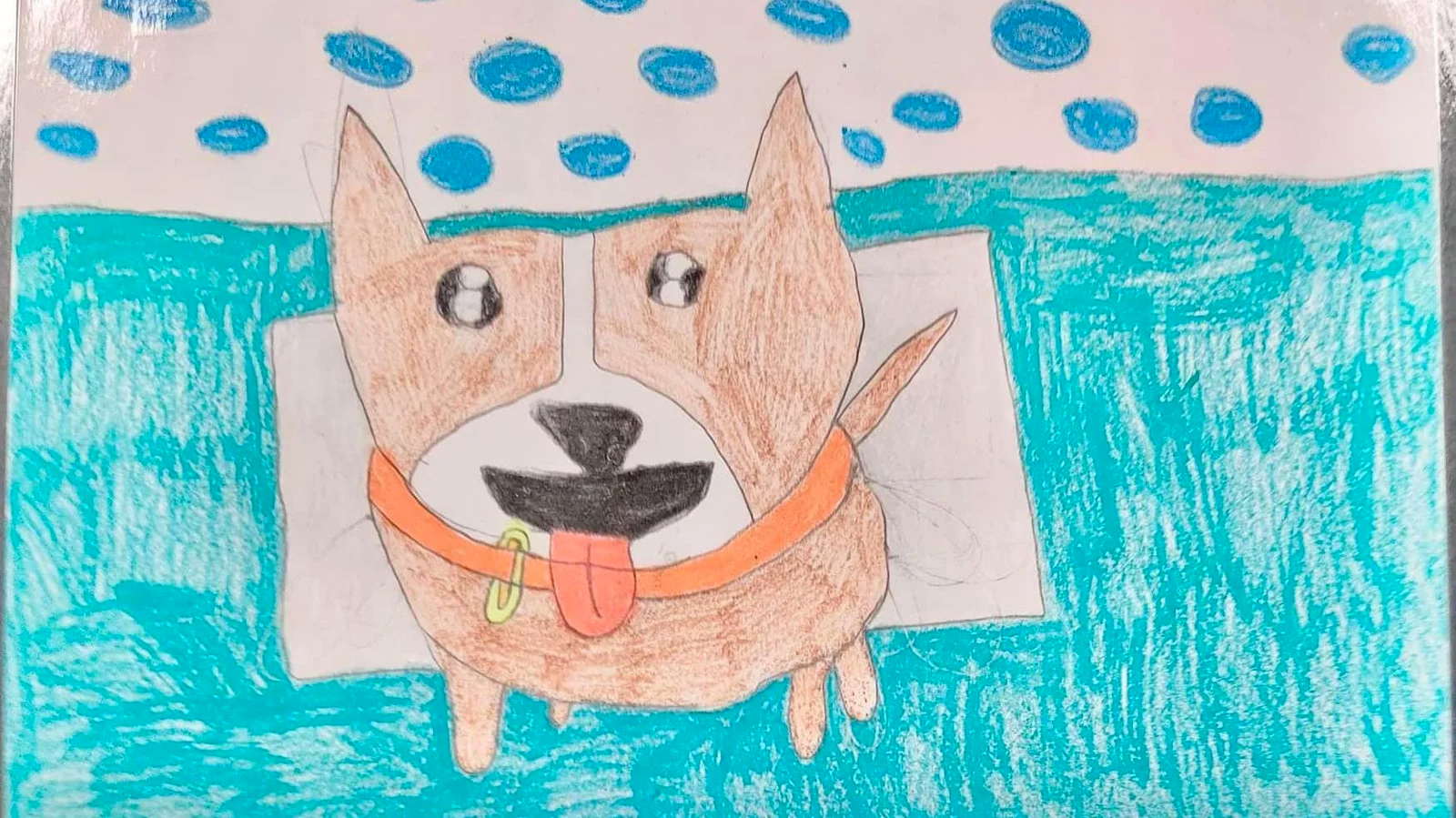 The letter came from a student in Kensey Jones' writing class at St. Michael's Episcopal School in Richmond, Va. It was part of a persuasive writing assignment — Jones' brainchild — that asked students to write letters in the voice of one of 24 animals — 23 dogs and one cat — at the shelter.

In each letter, the young writers persuaded readers to adopt an assigned pet, from the point of view of the animal.

So far, the students' work has been effective. After posting the letters outside each kennel, only four dogs remain: Pebble, Yosemite, Kotey and I'll Tumble For Ya. 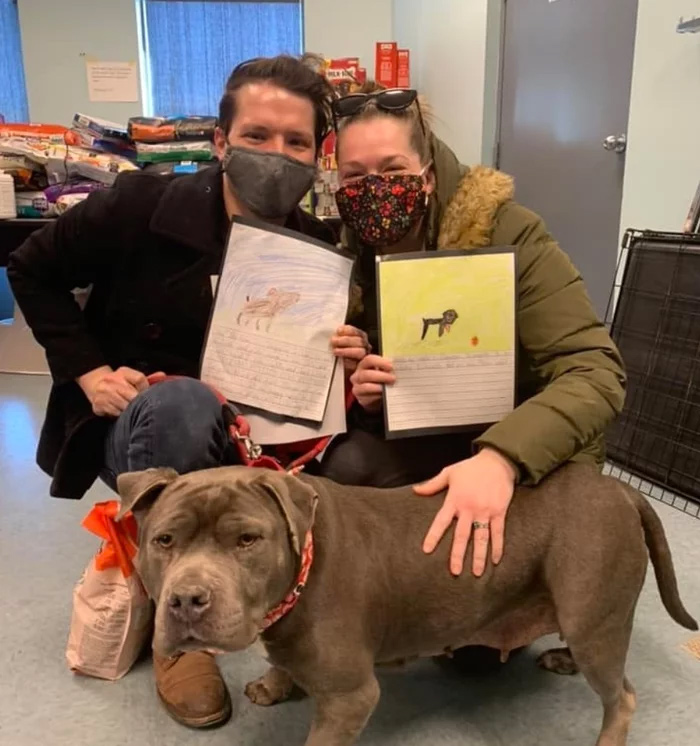 This dog was adopted after the persuasive writing assignment.
St. Michael's Episcopal School/RACC

"It was just a miraculous marketing tool to help people find those pets and fall in love with them with the stories that the kids wrote, and then take that pet home with them," Peters told NPR.

When Peters was compiling the dogs to include on the list, she stuck with the ones who are harder to adopt, like ones who had health or behavioral challenges.

Ordinarily, people might walk past these animals without taking a second look, but the letters and matching illustrations encouraged people to slow down, Peters said.

Sunday Special, a tan and white pitbull (who was aptly picked up on a Sunday), also found his home after a second-grader wrote a letter on his behalf. He doesn't always show well, Peters said, and was very afraid of people.

But one student wrote a compelling letter in his voice. 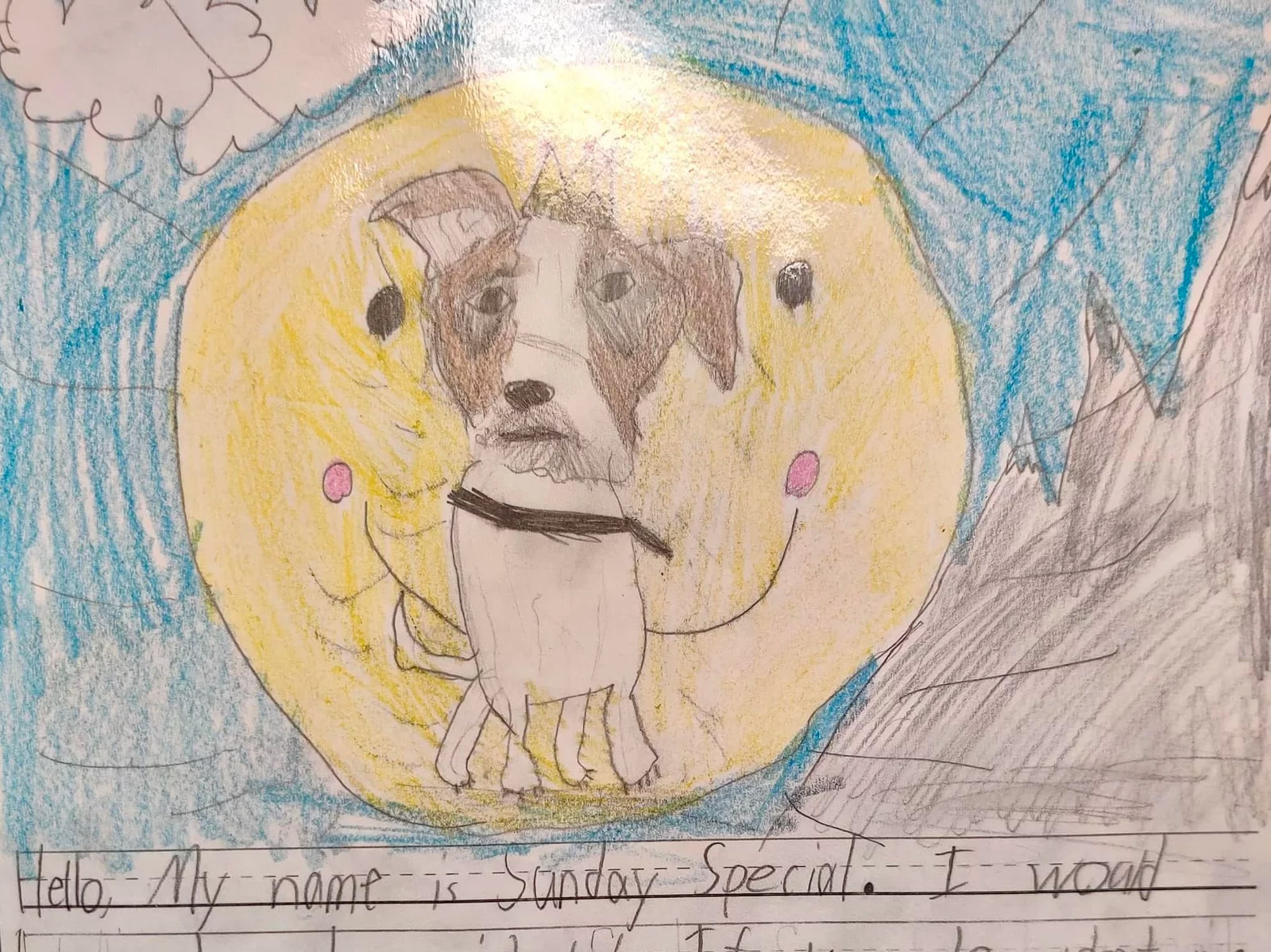 "Hello, my name is Sunday Special," the letter began. "I would love to be adopted. If you do adopt me, I hope I will brighten up your Sundays like the sun! You'll be my Sunday Special and I hope I'll be yours!"

The pup was able to find a home, and Peters is certain the letter was a factor.

"His little story, I'm telling you, is the reason that he got adopted," Peters said.

The students have been enthusiastic throughout the process, Jones tells NPR. It probably helps that Peters brought in Snow, a white pitbull, for a visit with the students. The kids were "so excited and happy and jumping out of their skin" when they met the well-mannered fella, Peters said. 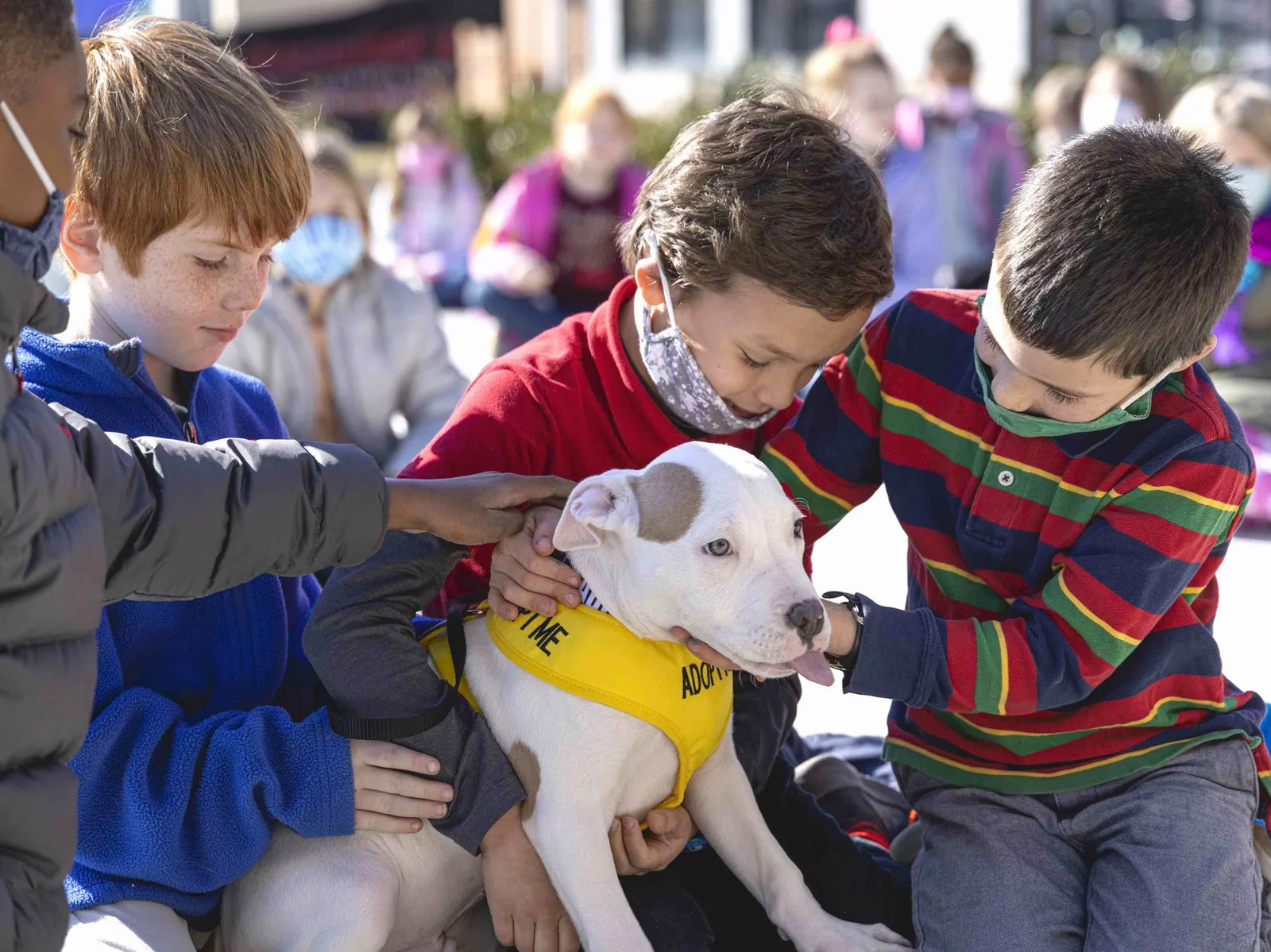 Even though the writing took place in early February, students still ask about the animals they wrote about.

"Has I'll Tumble For Ya been adopted yet?" Jones recalls one student asking before the day's lesson had even started.

Jones says she's watched her students develop an eagerness to write, even beyond this project.

"They are just so excited to use their writing, whether it's to persuade, to inform, to do some research," Jones said.

Jones, who volunteers at the shelter, said she hopes the students learn that "they can do anything," even if they're only 7 or 8 years old. She hopes that other teachers will also partner with their local shelters.

"Make that impact for not only the children, but the dogs that are awaiting their forever home," Jones said. 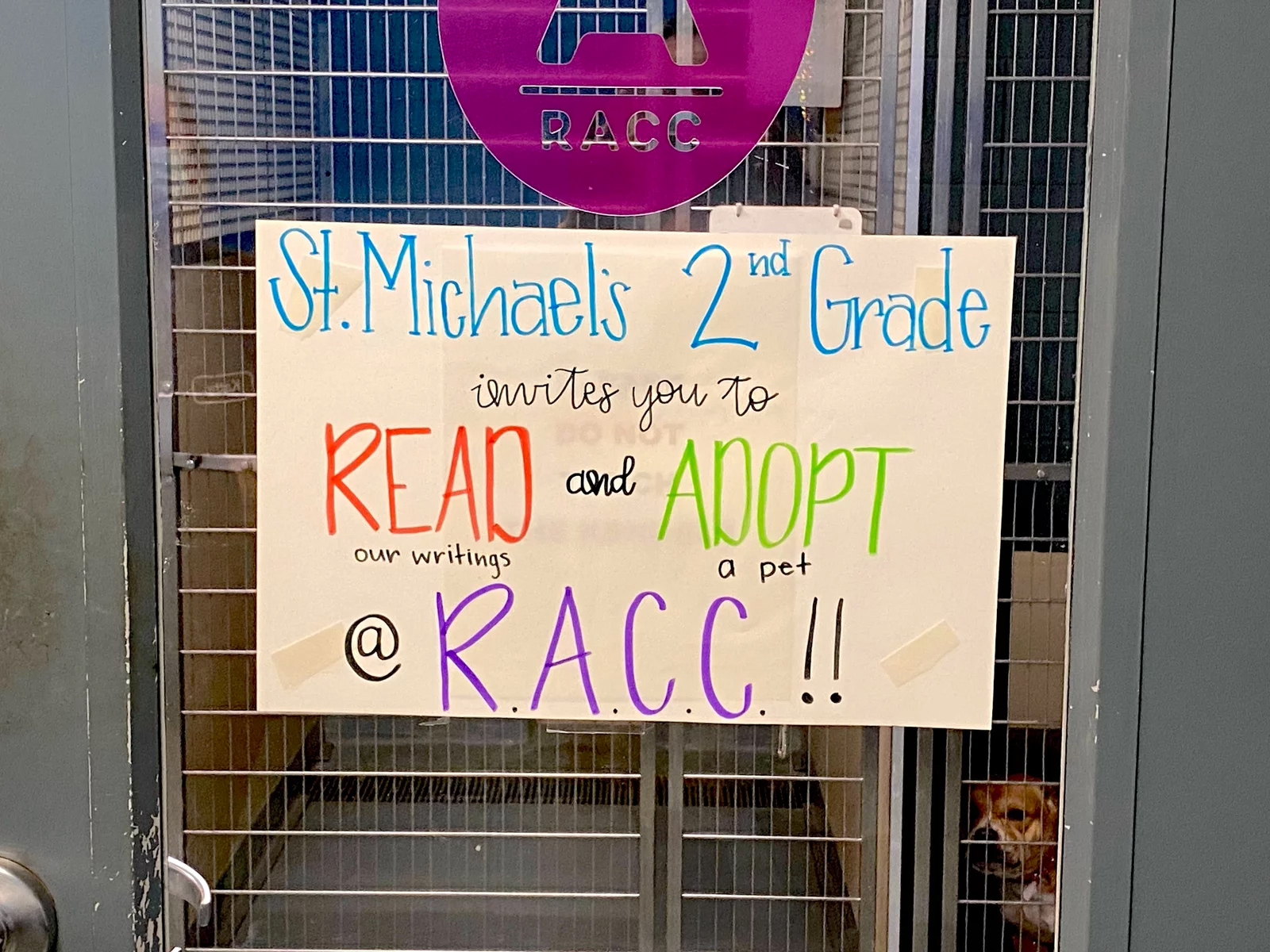 A sign about the assignment on a kennel.
St. Michael's Episcopal School/RACC
MORE: NPR News

Sony photo awards: Computers on horseback, magnificent mountains, bathing elephants Amputee Jacky Hunt-Broersma ran 104 marathons in 104 days — and may have set a record Here's how to watch the total lunar eclipse on May 15
By posting comments, you agree to our
AZPM encourages comments, but comments that contain profanity, unrelated information, threats, libel, defamatory statements, obscenities, pornography or that violate the law are not allowed. Comments that promote commercial products or services are not allowed. Comments in violation of this policy will be removed. Continued posting of comments that violate this policy will result in the commenter being banned from the site.