Sony World Photography Awards is an annual global competition that is free to enter and open to photographers of all skill levels. by Jennifer Swanson, NPR Tweet 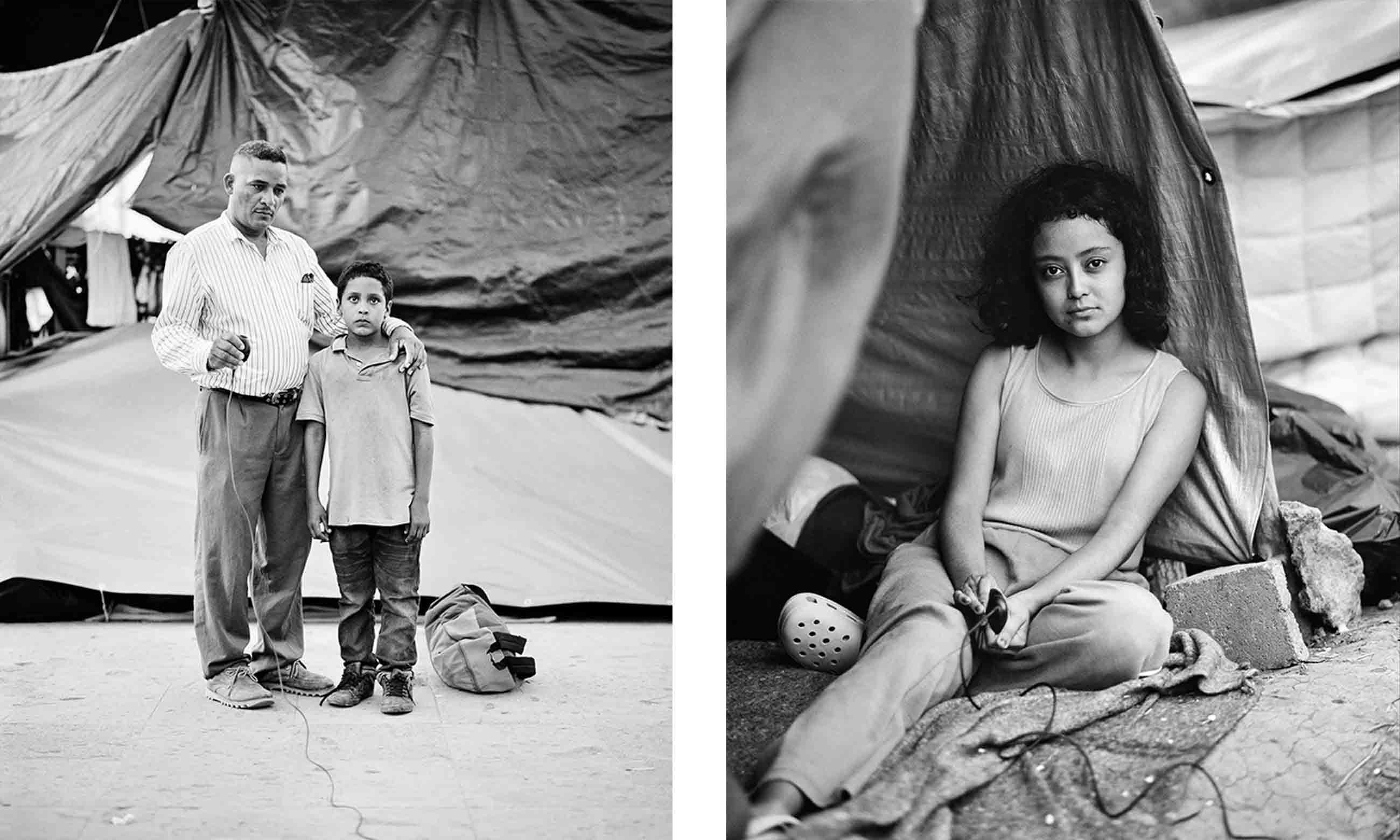 Left: Edwardo Benavides and his son Jonathon Benavides Reyes are migrants from La Unión, El Salvador. They took this portrait at an informal migrant camp in the border city of Reynosa, Mexico. Right: Stephanie Solano, 17, from Zacapa, Guatemala takes a portrait of herself at the camp in Reynosa.
Adam Ferguson/2022 Sony World Photography Awards

The photographer of the year for the 2022 Sony World Photography Awards didn't take the photos – technically.

The striking black-and-white portraits of migrants on the U.S.-Mexico border were actually taken by the subjects themselves. Australian photographer Adam Ferguson gave them a remote trigger for his camera and told them to take the photo whenever they were ready.

The images highlight the migrants' "desire for freedom and self-respect. They are people who have a choice to make," says Mike Trow, jury chair of the awards.

These intimate photos are showcased alongside many honorees in this year's Sony World Photography Awards, an annual global competition that is free to enter and open to photographers of all skill levels. This week, jurors announced the overall winners, which include the work of photojournalists, creative photographers and student and amateur photographers. More than 340,000 images were submitted from 211 countries and territories.

Working in both black and white and color, photographers showed a world of unexpected moments and evocative landscapes – from a man in Argentina transporting computers on horseback to a lone figure in a Pakistani desert.

An exhibition of over 300 images from the contest are on display at Somerset House in London until May 2. Here is a selection of eye-catching images by finalists and winners from around the globe. 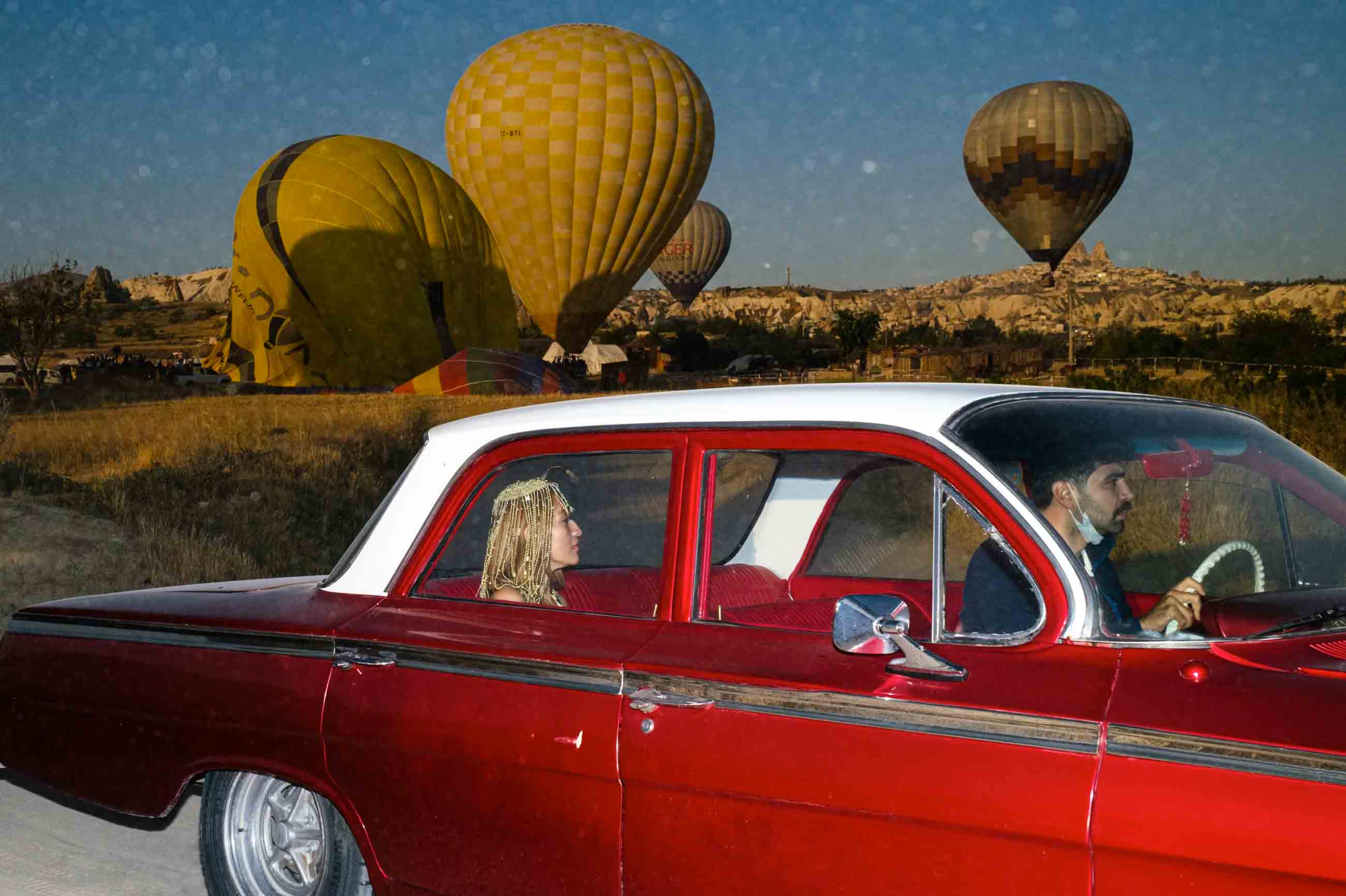 A woman and a man ride in a vintage car as hot air balloons float behind them in the region of Cappadocia, Turkey.
Emre Çakmak, Turkey, Shortlist, Open, Street Photography, 2022 Sony World Photography Awards 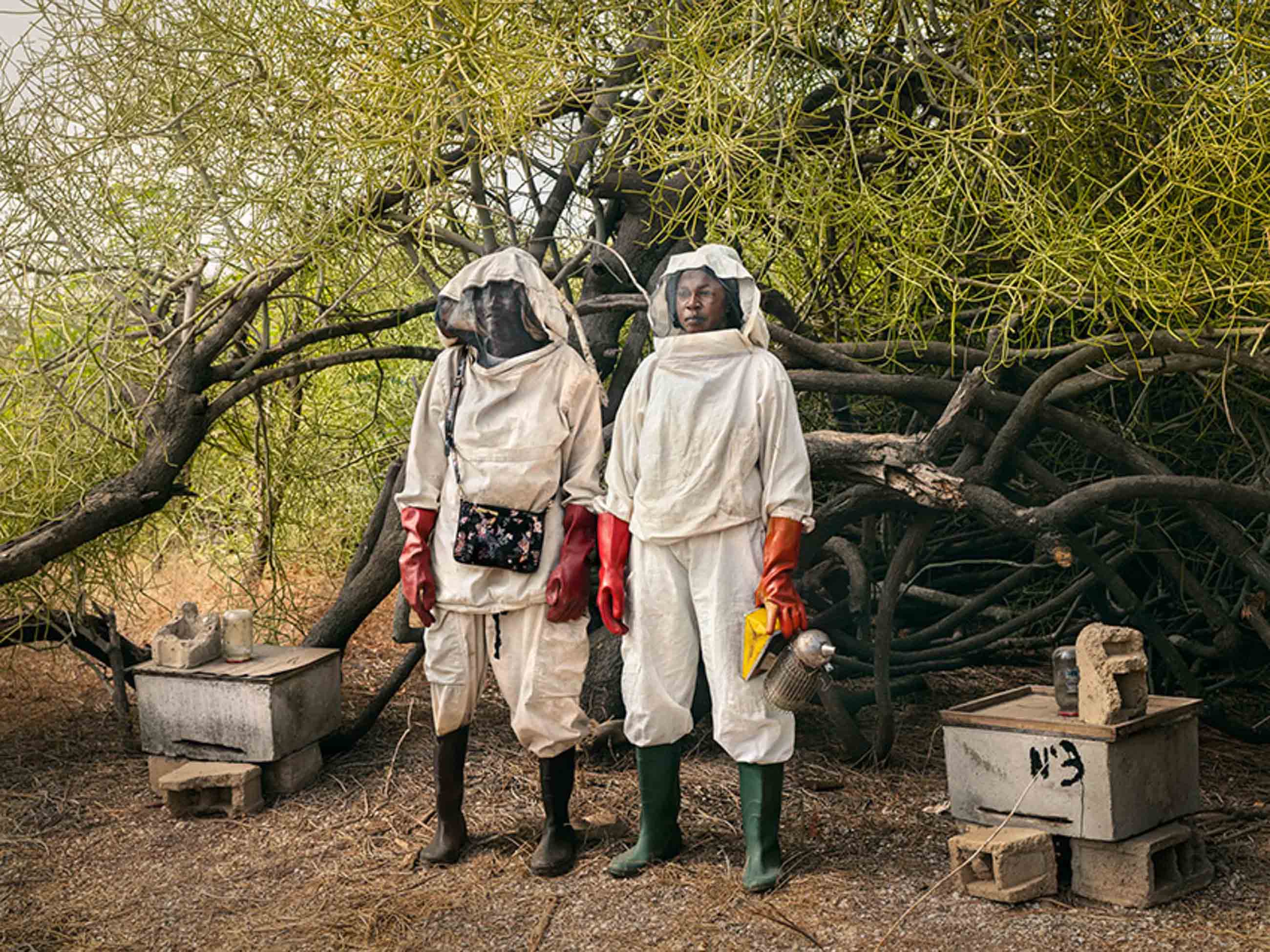 Beekeepers in central Senegal. The bees get their nectar from local mangrove flowers. The honey will be sold at the village market.
Luca Locatelli, Italy, Shortlist, Professional, Portfolio, 2022 Sony World Photography Awards 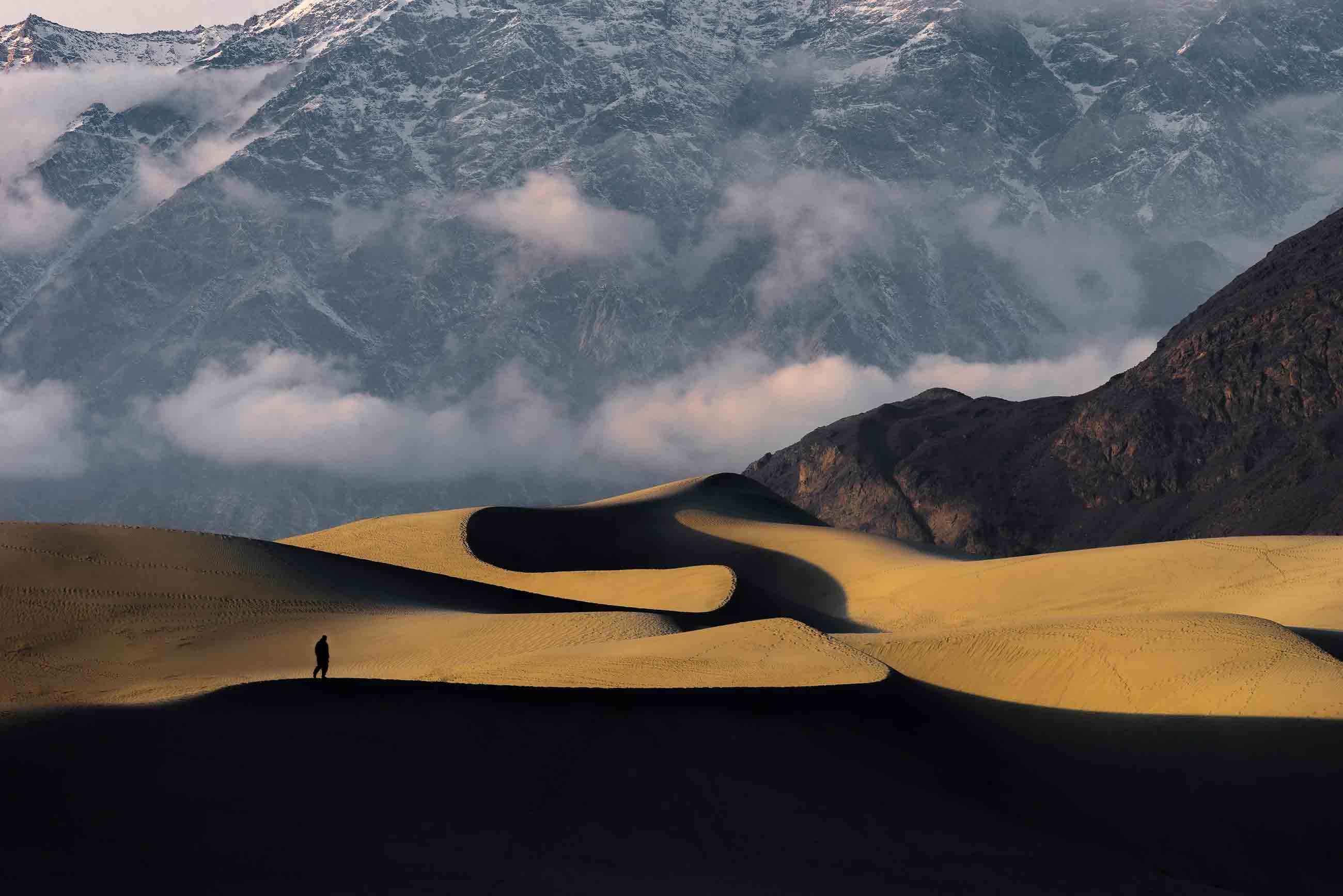 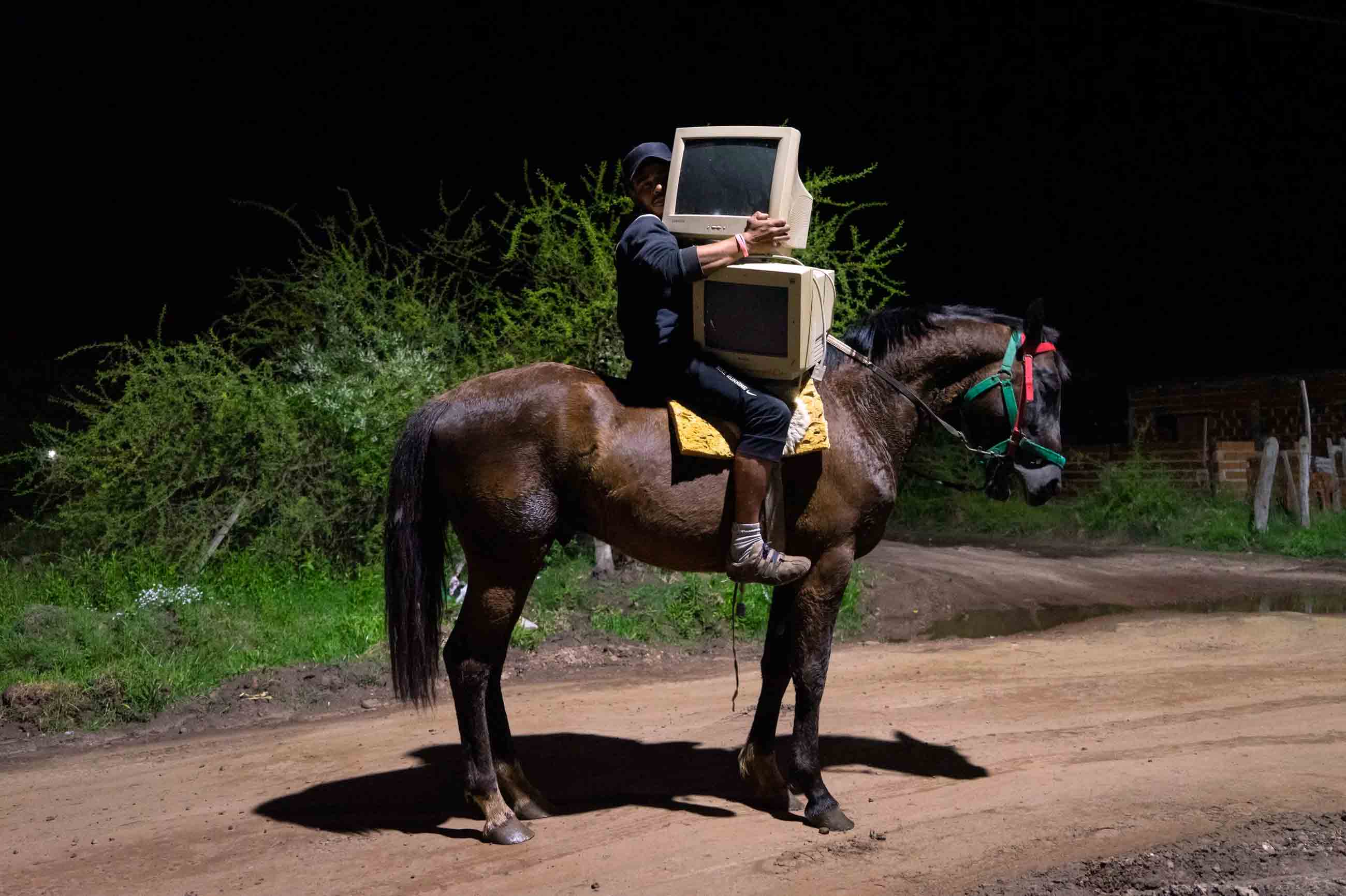 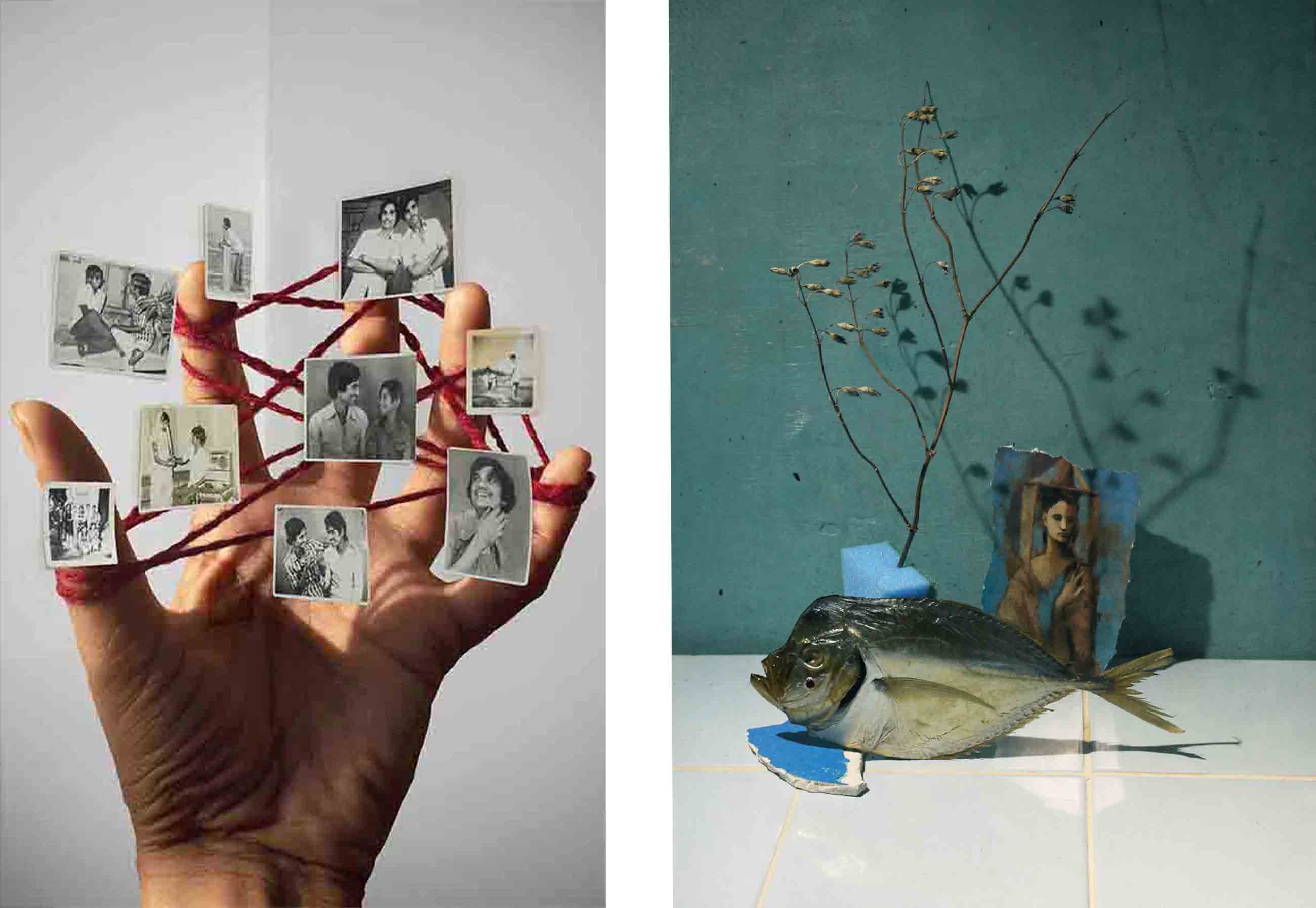 Left: Indian student photographer Sachi Deshmukh tangled her hand with yarn and old photos of her father. They "stand for the present, which is trying to connect with the past," she writes. Right: Belarusian photographer Maryia Sapego's still life consists of a fish, a sponge and a small painting, among other objects.
Sachi Deshmukh, India, Finalist, Student, 2022 Sony World Photography Awards / Maryia Sapego, Belarus, Shortlist, Open, Object, 2022 Sony World Photog 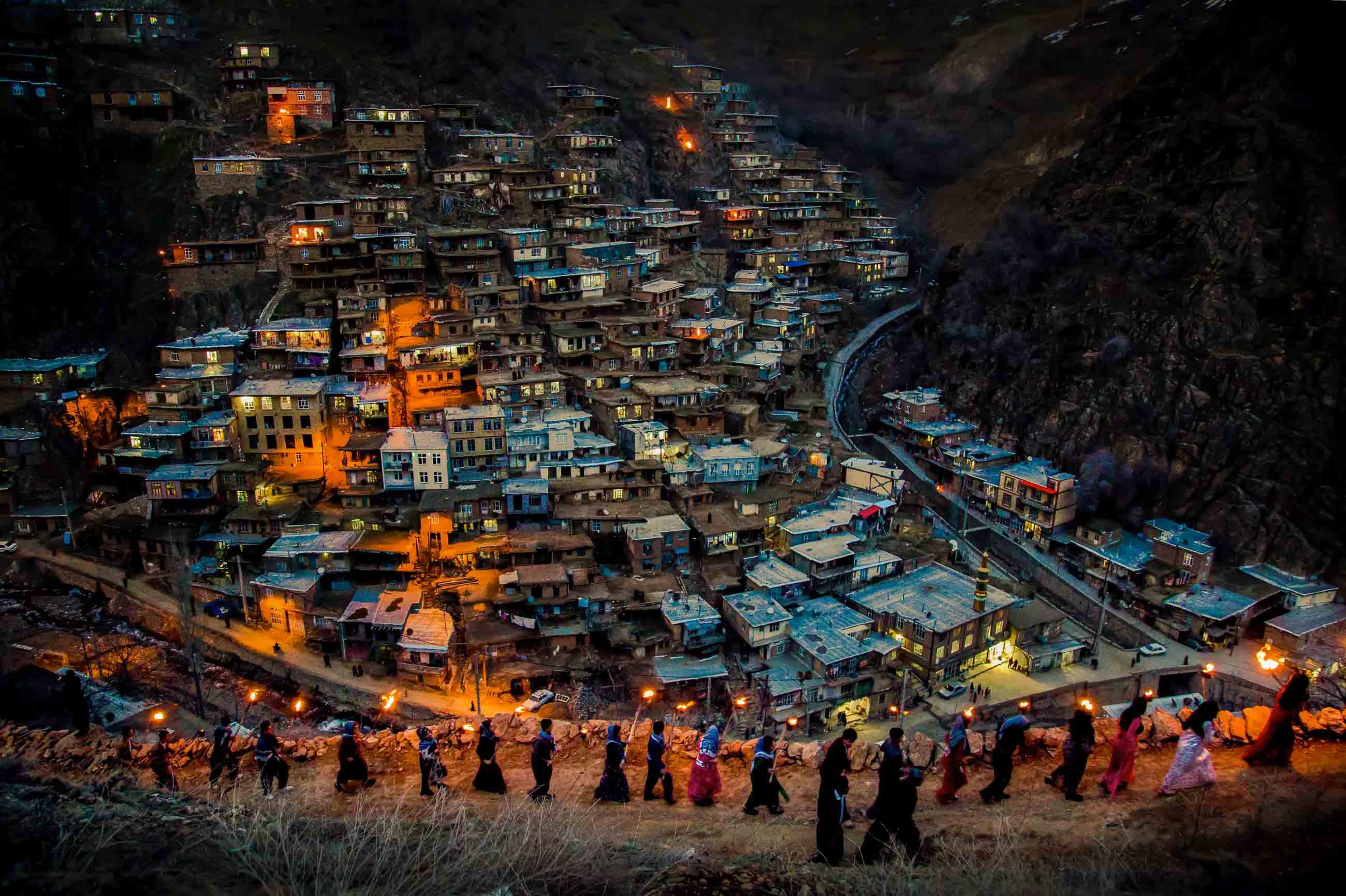 A line of men and women with torches walk along a ridge above a city nestled in the mountainside in Kurdistan.
Milad Nalbandiyan, Iran, Shortlist, Open, Travel, 2022 Sony World Photography Awards 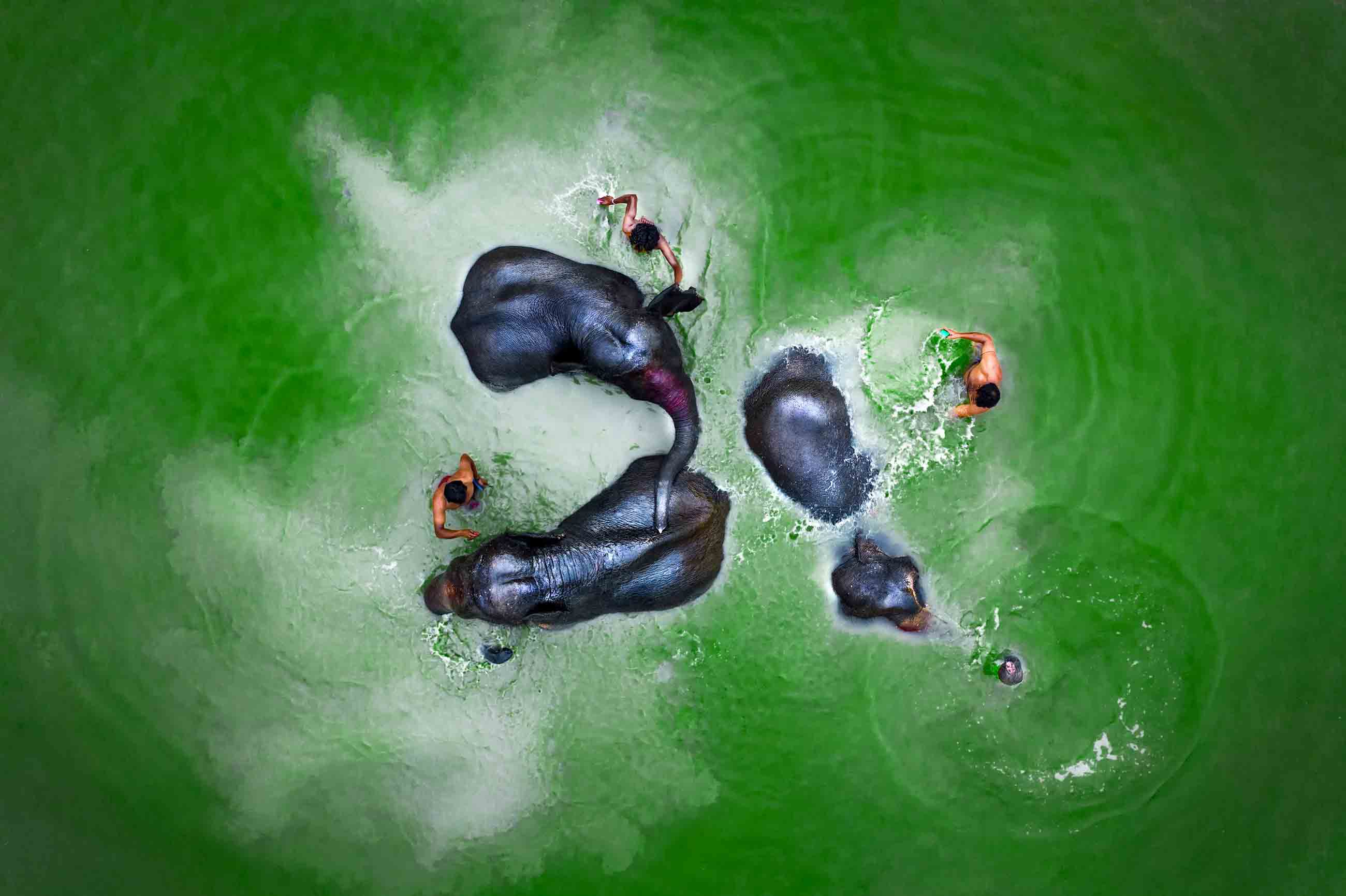 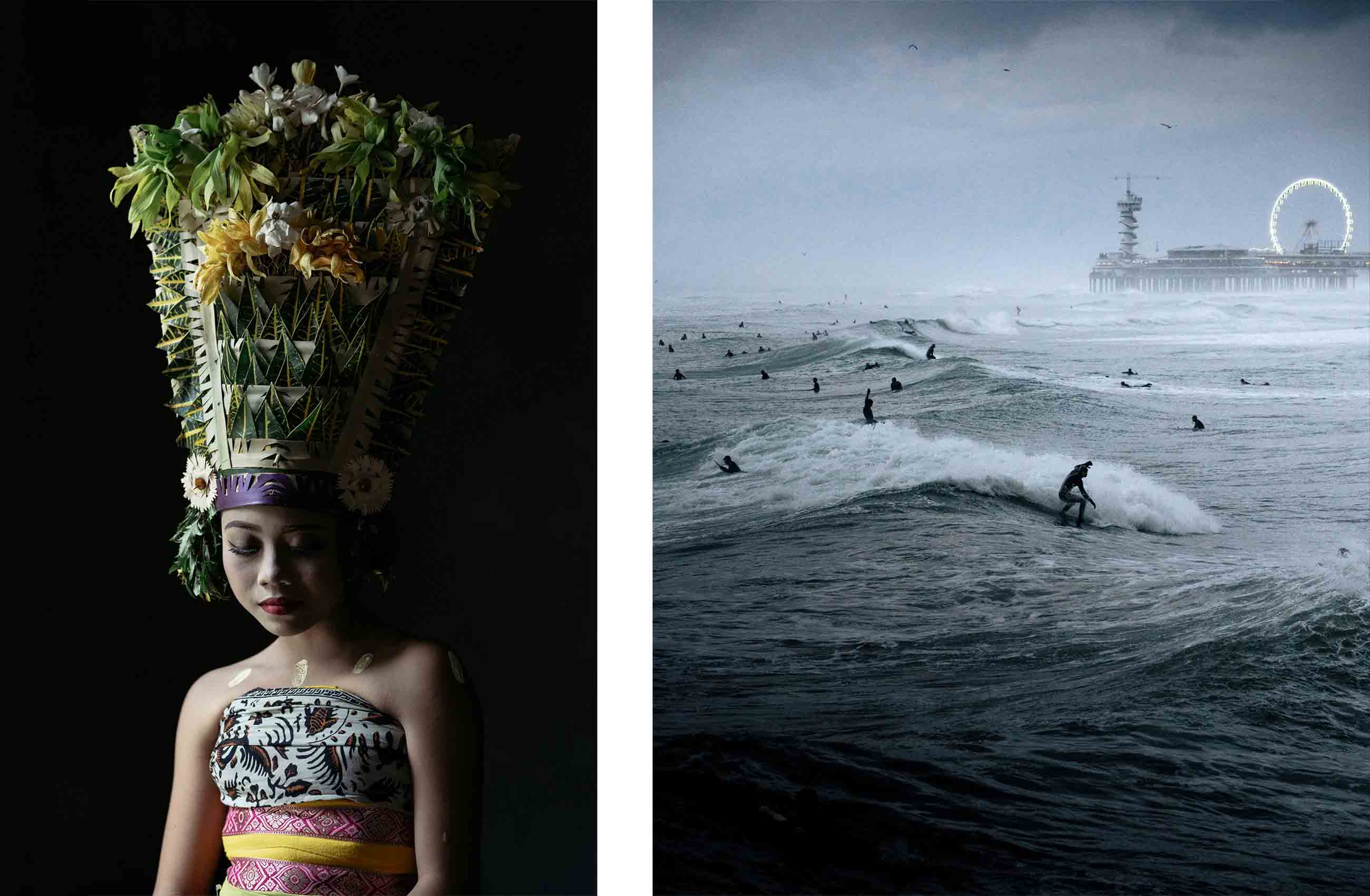 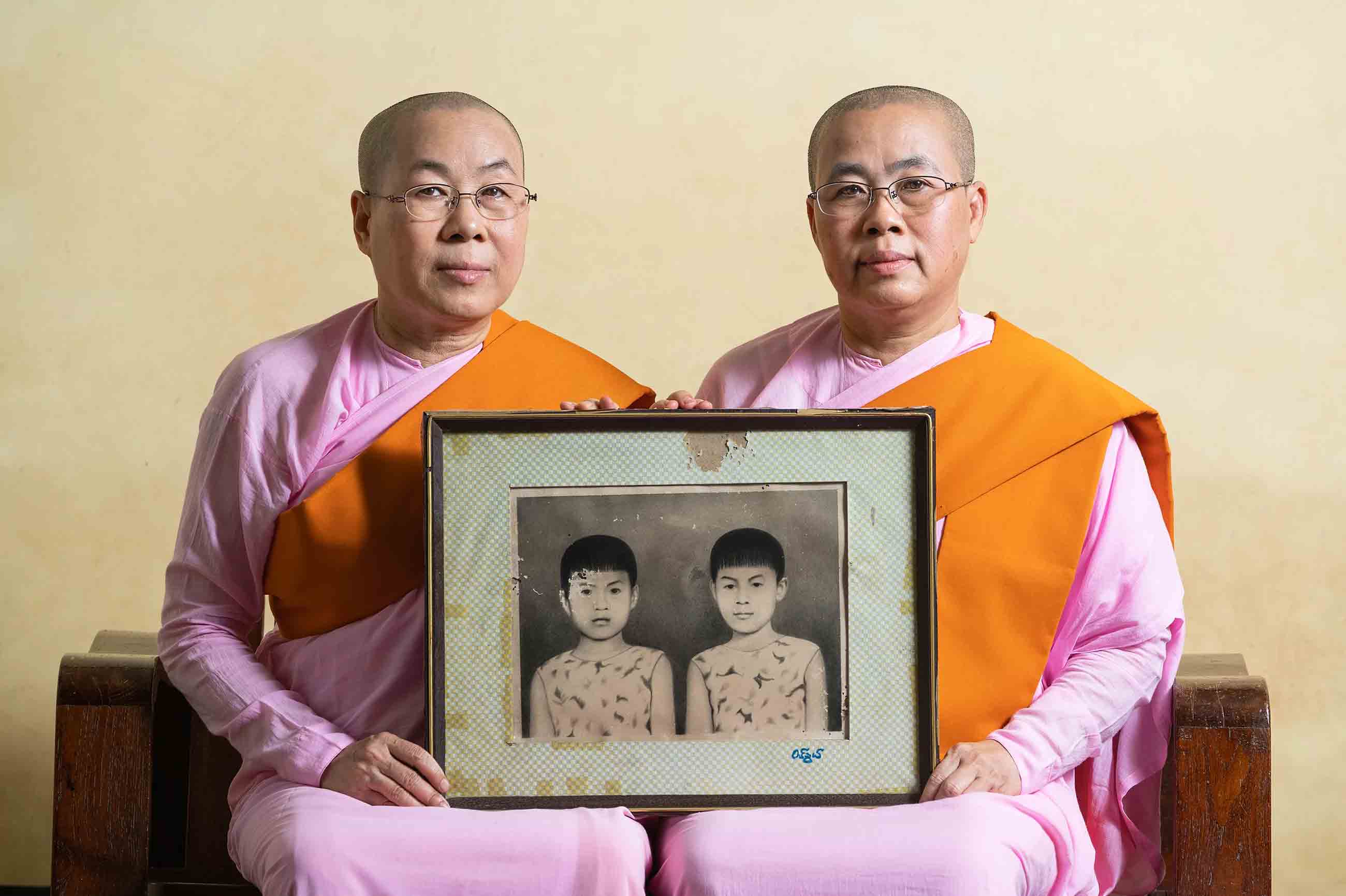 Twin sisters at a Buddhist monastery near the Hpa-an Township in Myanmar share a photo of themselves as children.
Swe Tun, Myanmar, Winner, National Awards, Portraiture, 2022 Sony World Photography Awards 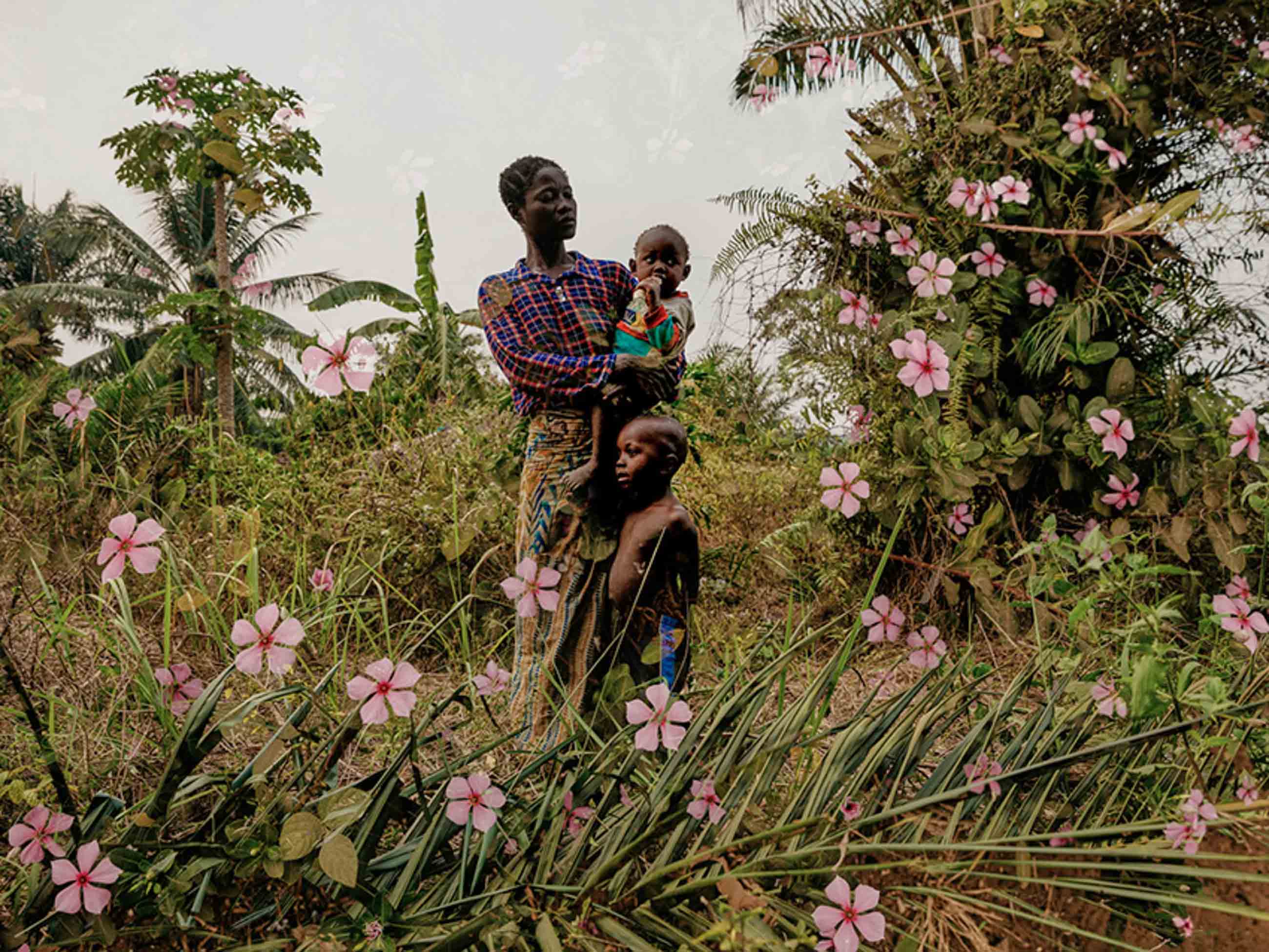 A mother and her two children in the Kasaï province of the Democratic Republic of Congo. The province is still reeling from years of violent conflict. In his caption, photographer Hugh Kinsella Cunningham said he used double exposures to underscore the "tension of life for mothers in Kasaï, living in beautiful land, but unable to provide for their families."
Hugh Kinsella Cunningham, United Kingdom, Shortlist, Professional, Creative, 2022 Sony World Photography Awards
MORE: NPR News

Here's how to watch the total lunar eclipse on May 15 Watch: Congressional District 6 Republican Debate Amputee Jacky Hunt-Broersma ran 104 marathons in 104 days — and may have set a record
By posting comments, you agree to our
AZPM encourages comments, but comments that contain profanity, unrelated information, threats, libel, defamatory statements, obscenities, pornography or that violate the law are not allowed. Comments that promote commercial products or services are not allowed. Comments in violation of this policy will be removed. Continued posting of comments that violate this policy will result in the commenter being banned from the site.