Hollywood's famous, aging mountain lion has been captured by authorities. Now what?

A famous mountain lion known as the "Hollywood Cat" is being evaluated by wildlife officials after exhibiting signs of distress, including killing a leashed dog in a residential neighborhood. by NPR/Rachel Treisman Tweet 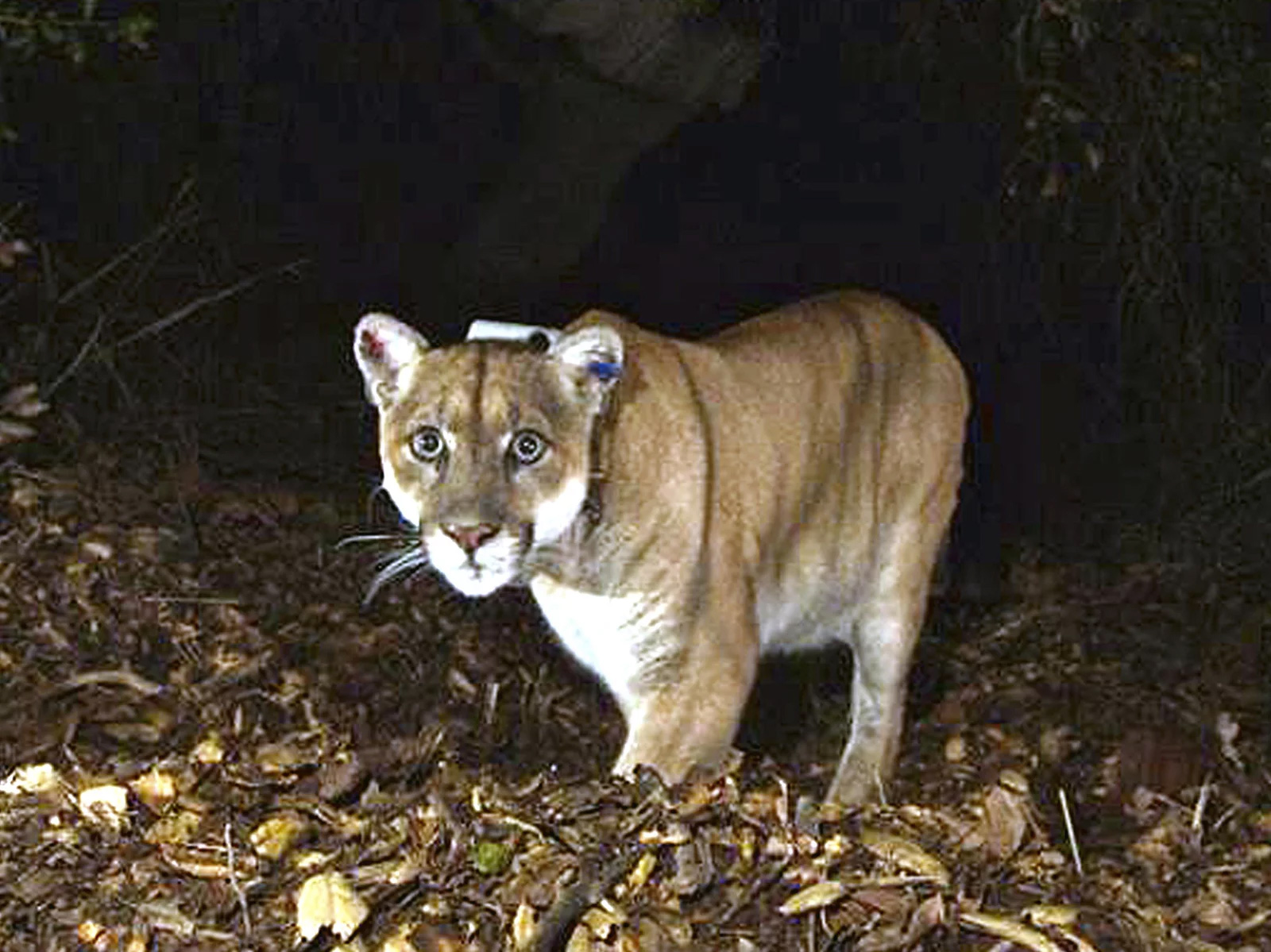 The mountain lion known as P-22, photographed in November 2014 in the Griffith Park area near downtown Los Angeles, is undergoing health evaluations after being captured on Monday.
U.S. National Park Service via AP
A famous mountain lion known as the "Hollywood Cat" is being evaluated by wildlife officials after exhibiting signs of distress, including killing a leashed dog in a residential neighborhood.

P-22, as ecologists dubbed him, has made a name for himself in Los Angeles, where he's been living in Griffith Park — home to the iconic Griffith Observatory and Hollywood Sign — since at least Feb. 2012.

He likely got to the area from the Santa Monica Mountains by traversing two major L.A. freeways, which the National Park Service says is "a feat other lions have died trying to do." And he's gained further notoriety over the years, with some of his greatest hits including: posing for a now-famous photoshoot by the Hollywood Sign, overcoming a public battle with rat poison, burrowing beneath a home in a saga that captivated TV audiences and allegedly killing a koala at the L.A. Zoo.

The World Famous Hollywood Sign Mountain Lion P-22 knows how to make an entrance! You may remember him featured in National Geographic in 2013: https://t.co/xovnmg1ToE pic.twitter.com/xbHiSngWPc

P-22 has been celebrated as the "Brad Pitt of mountain lions" and a sort of "ambassador for urban wildlife." But he's also getting up there: The NPS estimates he is 12 years old, which makes him the oldest Southern California cougar currently being studied and puts him at the far end of his species' typical lifespan.

The California Department of Fish and Wildlife (CDFW) calls him "a remarkably old cat in the wild," and expressed concerns that he may be exhibiting signs of distress, citing sightings and recordings of him getting close to human dwellings. P-22 is also blamed for two recent attacks on leashed chihuahuas, killing one in Hollywood Hills in November and injuring another earlier this month.

"This is an unprecedented situation in which a mountain lion has continued to survive in such an urban setting," the CDFW said. "As P-22 has aged, however, the challenges associated with living on an island of habitat seem to be increasing and scientists are noting a recent change in his behavior. This underscores the consequences of a lack of habitat connectivity for mountain lions and all wildlife."

The two agencies — state and federal — announced on Thursday that they would team up to catch P-22 and bring him in for a health evaluation. By Monday, they had successfully captured him in a resident's backyard.

P-22 is stable, but his future is uncertain 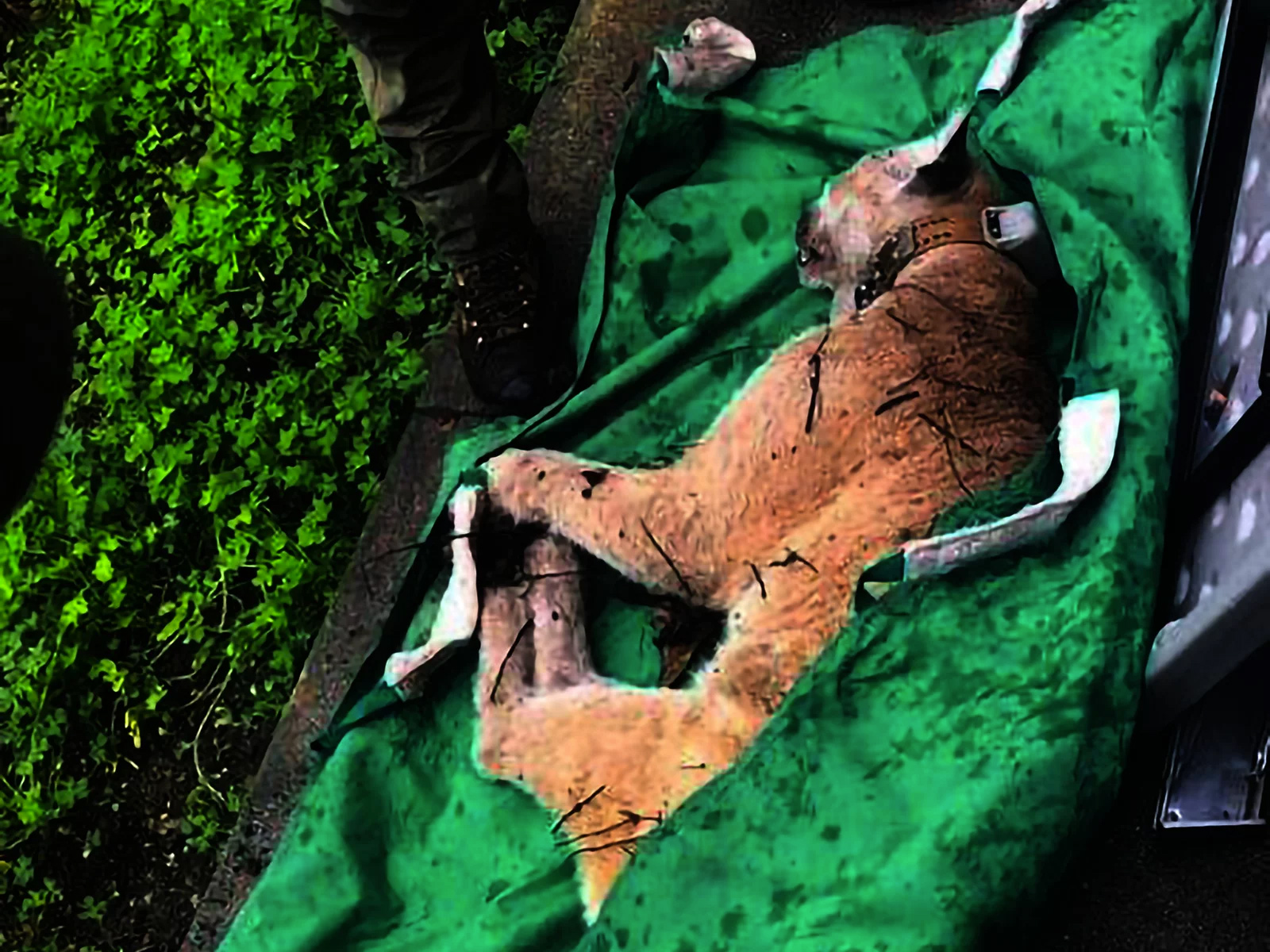 On Sunday night, authorities received an anonymous report indicating that P-22 may have been struck by a vehicle. They found him the next day in a neighborhood south of his home base and tracked him down using the GPS signal from his collar, the agencies said in a joint release.

Resident Sarah Picchi was working from home when a wildlife officer rang her doorbell Monday morning to inform her "there's a lion in your backyard," as she told the Washington Post.

She and her husband watched from the window as a group of officers cautiously approached the animal in the bushes, subdued him with a tranquilizer gun, checked his teeth and temperature, carried him via tarp into a container and drove away, all in roughly 40 minutes.

P22 was captured in our backyard. Some animal control guys told us there’s a lion in your yard. They tranquilized him and took him to LA Zoo for observation. Quite a day! pic.twitter.com/syS1kItznI

Picchi told the New York Times that her neighbors had been watching the sightings and were concerned about P-22, whom she described as a kindred "kind of an Angeleno himself."

"They feel a lot of empathy for him because he's kind of on his own," she said, referring to city residents.

P-22 is the only mountain lion known to have crossed the freeways, but one of many that National Park Service scientists are studying in the Santa Monica Mountains and surrounding area (and that number is growing, with officials announcing last week that one of the mountain lions they're tracking gave birth to four healthy kittens in July).

Beth Pratt, the California executive director for the National Wildlife Federation, tweeted that she cried "tears of relief" when she heard P-22 had been safely captured, emphasizing that he was brought in "quickly and humanely."

She said the cause of P-22's sudden change is not known, acknowledging the people and pets that his "distress has impacted" and thanking the community for their support during this challenging time.

"P-22 means so much to so many," she added. "There is a team dedicated to his safe keeping and making sure he has the best care and options for this next phase of his journey."

The wildlife agencies said they had transported him to a wild animal care facility for a full health evaluation, where an initial assessment found him to be in stable condition. He is undergoing additional veterinary evaluation, and the agencies say they are working to find "the most humane option" for both the lion and his community.

"CDFW veterinarians and NPS biologists will determine the best next steps for the animal while also prioritizing the safety of the surrounding communities," they said. "CDFW and NPS have already been in contact with leading institutions for animal care and rehabilitation centers."

They noted "how many people are concerned about mountain lions, their conservation and P-22 in particular," and promised to provide more updates as they have them.

Episode 349: Exploring the University of Arizona campus arboretum NASA's Webb telescope has discovered its first exoplanet My wife and I quit our jobs to sail the Caribbean
By posting comments, you agree to our
AZPM encourages comments, but comments that contain profanity, unrelated information, threats, libel, defamatory statements, obscenities, pornography or that violate the law are not allowed. Comments that promote commercial products or services are not allowed. Comments in violation of this policy will be removed. Continued posting of comments that violate this policy will result in the commenter being banned from the site.