We asked, you answered: What precious object is part of your family history?

What's one precious belonging you brought along on your journey to remind you of home? by NPR/Marc Silver Digital Editor Tweet 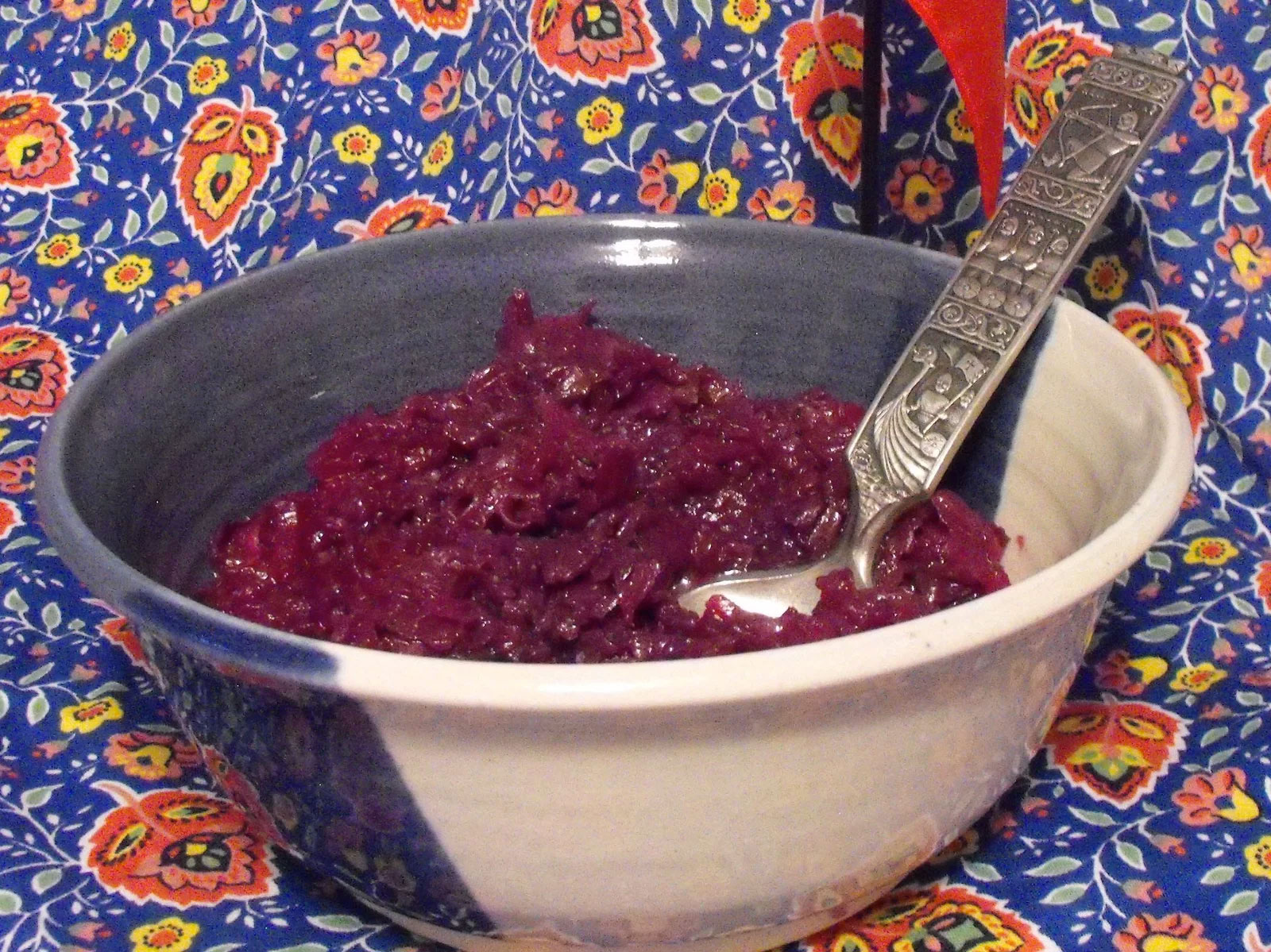 A grandmother's red cabbage, called surkål, cooked with caraway seeds and a dash of vinegar, was the jewel of Thanksgiving and Christmas dinners.
Jean Marshall
We interviewed 8 refugees from different corners of the globe and asked: What's one precious belonging you brought along on your journey to remind you of home? The answers ranged from a set of incense stones made by a Yemeni grandmother (and now emitting their special aroma in Ecuador) to Ukrainian sheet music.

We also asked our audience: Tell us about an object from your personal or family history that has special meaning as a memento of the past in a different country or a reflection of your identity.

Thanks to all who shared their stories. Here's a sampling of responses, edited for length and clarity.

My precious object is this more-than-a-century-old decanter.

In 1911, when my then 14-year-old grandfather Jan Roušar (changed to John Roushar on Ellis Island) and his family left Oldriš in Bohemia (now the Czech Republic) to come to the United States, they brought along this family heirloom. It is heavy cut crystal and must have had important meaning to carry that far. 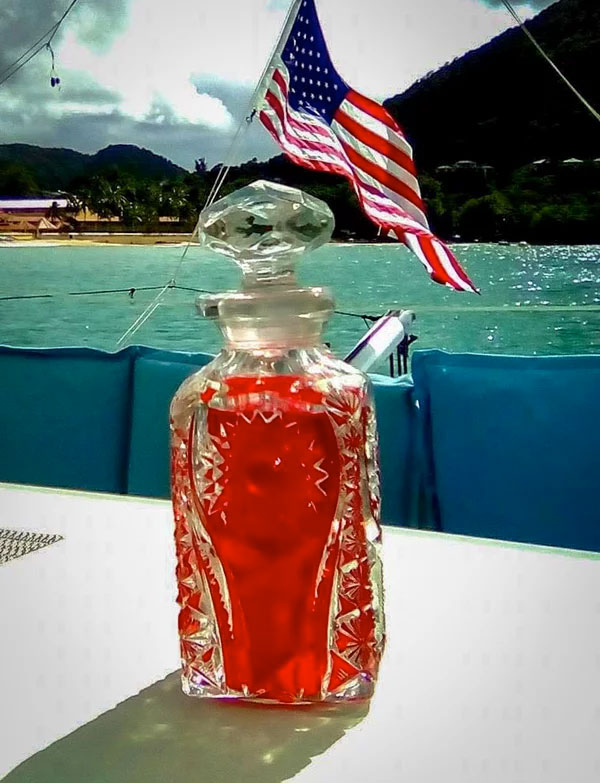 A decanter with a chip in it is a reminder of the willingness to take on bold challenges, such as a grandfather's Atlantic crossing as a boy.
Monica Elenbaas

I never saw this decanter in my childhood — it had a chip in the lip and was considered unusable. When my mom and Aunt Dorothy helped empty my grandparents' house in the 1970s, it moved to my mom's house and got tucked in the back of a china cabinet.

I came across it a few years ago while helping my parents in the cleanup after a fire. My mom asked me if I wanted it, "even though it's broken." I found it beautiful and decided that if and when my husband and I set sail, it would come with us on the seas, just as it had when my dear late grandfather was a boy making his Atlantic crossing.

It has traveled since 2016 with my husband and me on a 40-foot catamaran called "Grateful," which has journeyed to the waters of five continents.

I think Grandpa would approve. He's one of my angels above. I think of the bravery it took for his parents to see the writing on the wall and decide to leave behind their thriving mill business because they could see WWI coming and had no desire for their sons to be pressed into the Kaiser's army.

By comparison, crossing seas is pleasure for my husband Jamie and me. Whenever I look at the decanter I am reminded that willingness to take on bold challenges runs in the family.

In 1906 my grandmother, Oline Steffensen, traveled from Norway to the United States. She was 25 years old. She had joined The Church of Jesus Christ of Latter-day Saints and wanted to go to Utah so she could go to the temple there and "be sealed," as the Mormons say, to her mother, who had died when she was a very little girl. The desire to connect to her family members for eternity gave her the courage to make the journey. 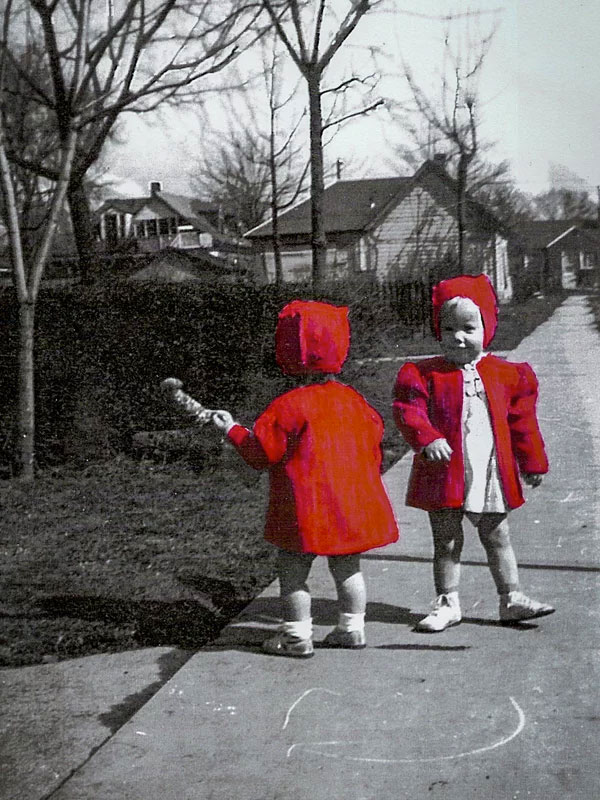 Red knitted caps were a grandmother's way of saying, "I love you."
Jean Marshall
In Salt Lake City she married Rudolph Stockseth, a fellow Norwegian, who was a printer. They had nine children. My father was the oldest. They never had enough money, but they had a great deal of love in their family. I remember well the camaraderie of my aunts and uncles at family gatherings.

What Oline brought from Norway was her ability to love ... and to knit ... and to cook.

I remember eating Thanksgiving and Christmas dinners in her small brick home and savoring the aroma and tangy taste of red cabbage cooked with caraway seeds and a dash of vinegar, called "surkål ." It was the jewel of the meal to me.

My grandmother's brusque, accented English made me think she was grumpy. I now realize that the food she made – and the red caps she knit for us – were her way of saying, "I love you."

I am 84 years old, considered to be a survivor of the Holocaust. But I think of myself as a "refugee" lucky to have escaped the Holocaust.

I was not quite 2 years old when my family (mom, dad and older sister) boarded what I was later told was to be the last train out of Paris before the French government was to surrender. I'm told it was the first week of June 1938, but don't know the exact date.

We were heading toward Bordeaux and then on to Spain, armed with all the requisite travel permits, American visas and a small suitcase packed with some clothing as well as my mother's travel sewing kit, contained in a repurposed red metal tobacco tin. 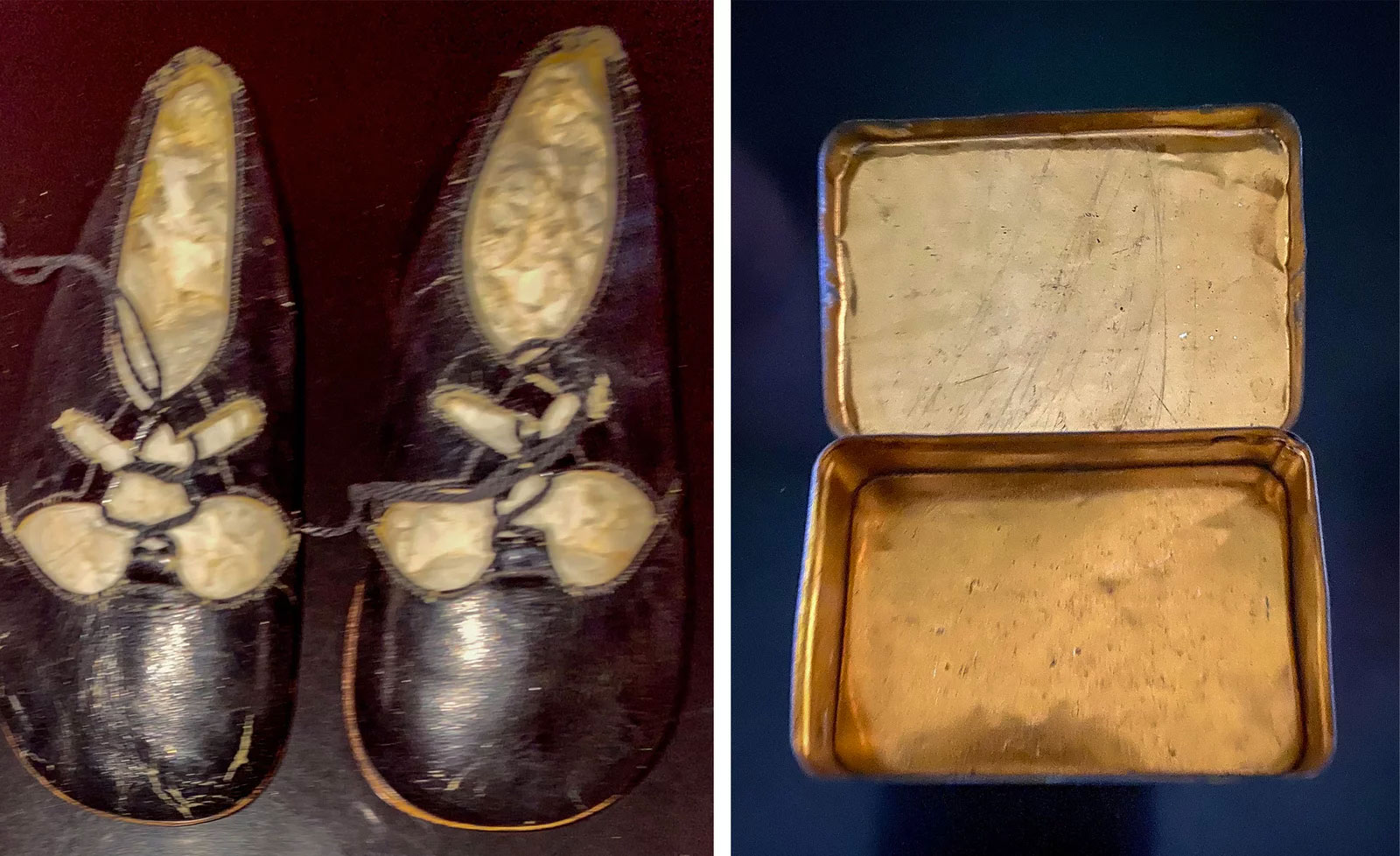 A pair of shoes and a mother's sewing kit kept from fleeing the Nazis brings to mind the resiliency and courage that refugees demonstrate in their quest for security.
Mireille Taub

It was a harrowing journey. The train, packed with refugees, was bombed – making war on civilians was a common Nazi tactic. We were lucky enough to survive and proceeded to walk to Bordeaux — which had been declared a closed city because of its strategic location, as well as the French government sequestered in Bordeaux had not yet decided how best to surrender.

We must have walked for miles. I wore my patent leather shoes, my parents carried that small suitcase. Eventually we met by chance the American consulate officer in a small city outside Bordeaux. My father and the officer were able to rent a truck to drive us to the Mediterranean coast. Eventually we were able to cross into Spain and Portugal, where we boarded a Greek freighter that set sail for New York. We arrived on August 11, 1940.

My patent leather shoes, no longer shiny and sparkling, remained on my feet until I outgrew them. I still have them, along with my mother's makeshift sewing kit. I use these items them as props for my volunteer work at the Nassau County Holocaust Memorial and Tolerance Center, where I tell visitors the reasons my family were forced to seek refuge as well as discussing the need for safe havens 82 years later.

I treasure my shoes and mother's sewing kit because it underlines the resiliency, determination and courage that refugees demonstrate in their quest for security — and as a reminder as well that for so many, the sheer presence of luck can chart your future.

Why I will never leave my flute behind

My most precious object is my flute! 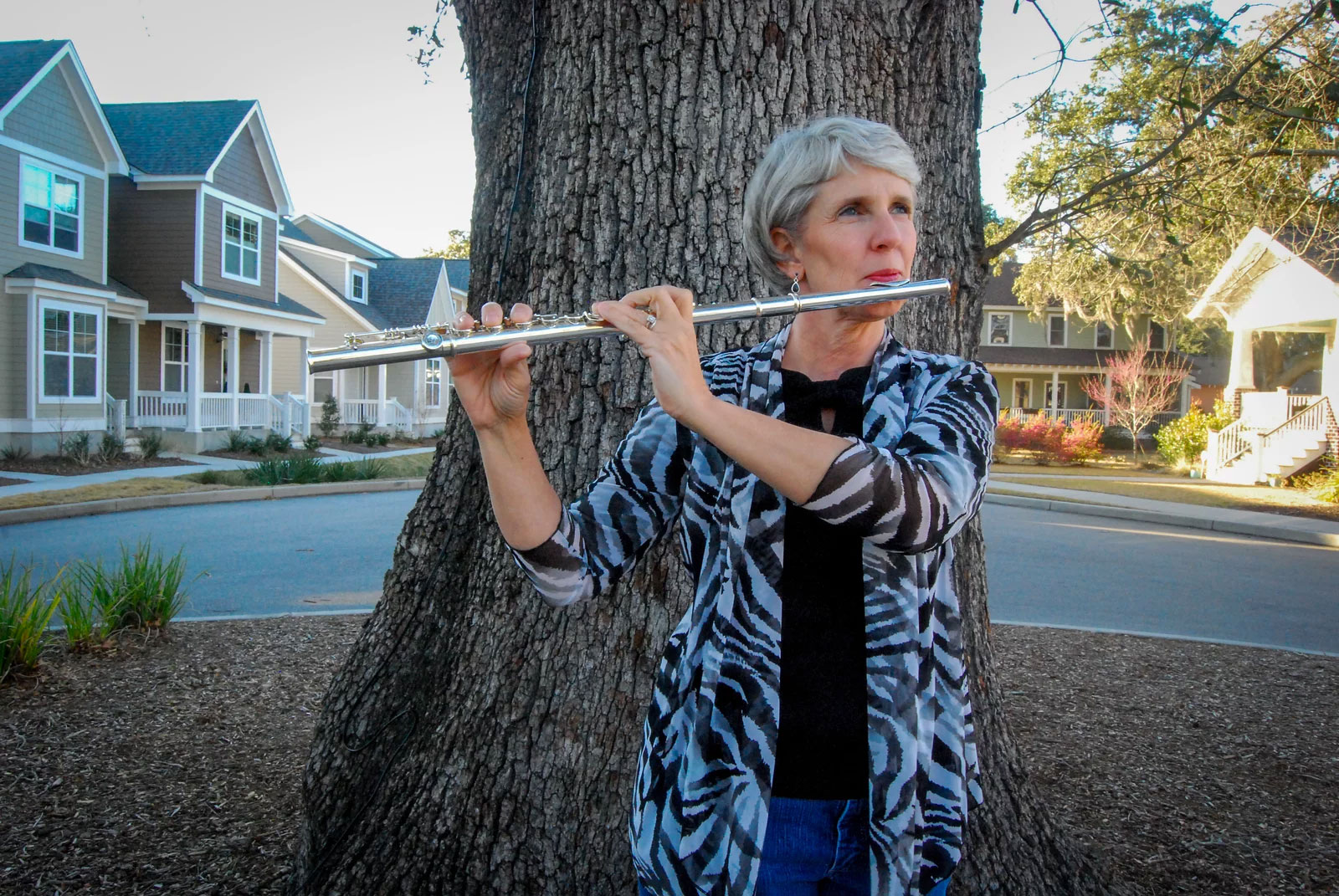 A flute saved from a fire represents a spiritual connection to music.
Penny Rogers
I started playing in the school band when I was in the 7th grade, a little over 50 years ago, and once I began playing, there was never any question about what I would do for a career. Playing music meets my spiritual needs like nothing else – and is mentally challenging, which I love.

I majored in music in college. My first job was as a music teacher. When the apartment building where I was living caught fire in the middle of the night, I ran outside. A fireman asked me to move my car so the fire truck could get closer to the building. He went back into my apartment with me so I could get my car keys: "Just your car keys, ma'am. Nothing else!"

When we left, I had my keys ... and my flute. I would have fought him if he had told me to leave it behind!

If I ever have to "bug out" for any reason, you can believe my flute will be the first thing I grab to take along!

Watch Live: Biden speaks as control of House, Senate remains up in the air Preventing wildfire with the Wild Horse Fire Brigade NPR Election Coverage Liveblog
By posting comments, you agree to our
AZPM encourages comments, but comments that contain profanity, unrelated information, threats, libel, defamatory statements, obscenities, pornography or that violate the law are not allowed. Comments that promote commercial products or services are not allowed. Comments in violation of this policy will be removed. Continued posting of comments that violate this policy will result in the commenter being banned from the site.