After years of waiting, rare turtles have bred 41 hatchlings at the San Diego Zoo

In a first for North America, an endangered species of turtles has bred at the San Diego Zoo. by NPR/James Doubek Tweet 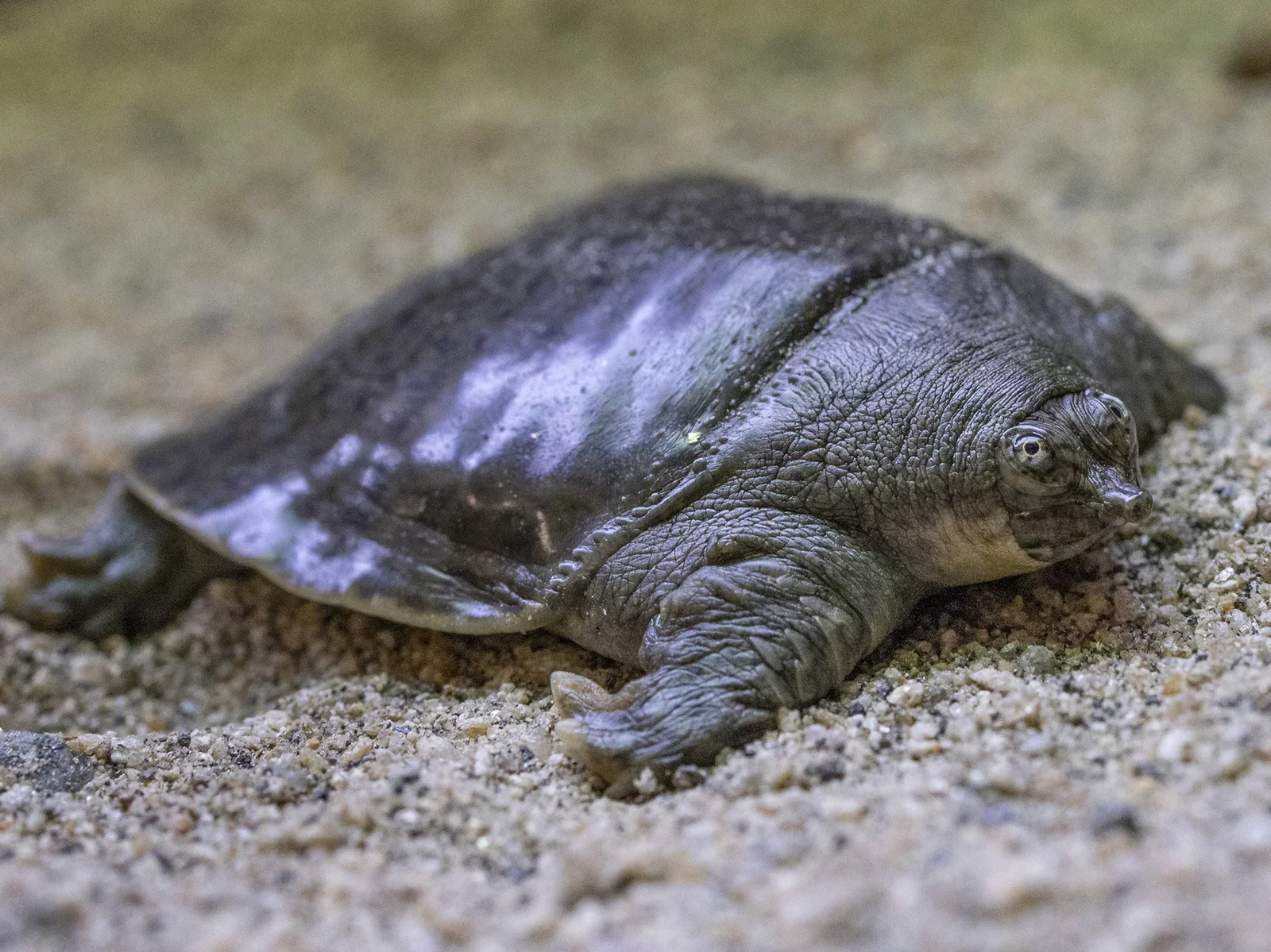 Over the summer, staff at the zoo welcomed 41 hatchlings from the Indian narrow-headed softshell turtle species, which is native to South Asia. It makes the zoo the first accredited organization in North America to hatch and raise the species.

Three Indian narrow-headed softshell turtles have been at the zoo for more than 20 years. All that time, zoo staff had been hoping they would one day reproduce.

The San Diego Zoo Wildlife Alliance, which operates the zoo, announced the discovery on Monday.

The eggs were found in two separate nests. Some of the turtles hatched in their habitat, while most of the eggs were stored in an artificial incubator to create the optimal conditions for survival. Turtle experts at the zoo say nests are often tough to find in the enclosure, as the turtles like to lay their eggs overnight and cover them with dirt.

The Indian narrow-headed softshell turtle, also known as the small-headed softshell turtle, is native to northern India, Bangladesh, Nepal and Pakistan, where the animals live at the bottom of deep freshwater rivers and streams. The turtles typically breed during the monsoon months in central India and during dry months in other areas, according to the Wildlife Institute of India. 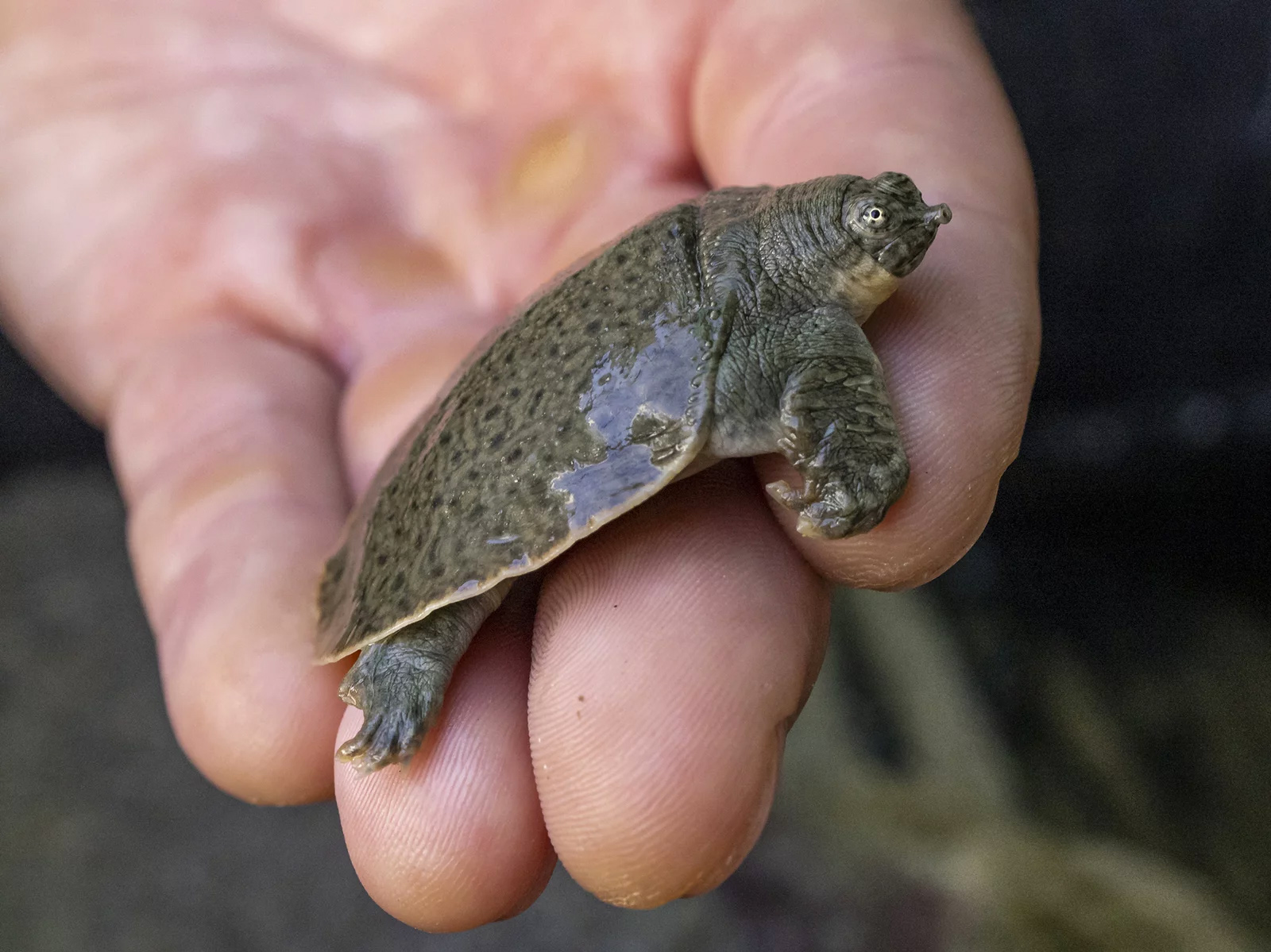 Hatchlings are quite small but can grow to a few feet.
Ken Bohn/San Diego Zoo Wildlife Alliance

When emerging from their shell, hatchlings can be as small as about 4 centimeters. They can grow to as long as 3.6 feet from the front to back of the top shell.

The species is listed as endangered on the International Union for Conservation of Nature's Red List, though it's unclear how many remain in the wild. Environmental pollution, sandbar habitat destruction, the international pet trade and human food harvesting have all contributed to the species' decline over the years, the San Diego Zoo Wildlife Alliance says.

"We have been focused on caring for these turtles for a very long time, and part of that care is to gain a greater understanding of the species' natural history," the zoo's Kim Gray added. "With the knowledge we gain here at the Zoo, we can better assist our partners in India to help this essential species thrive in their native habitat."

Preventing wildfire with the Wild Horse Fire Brigade NPR Election Coverage Liveblog Watch Live: Biden speaks as control of House, Senate remains up in the air
By posting comments, you agree to our
AZPM encourages comments, but comments that contain profanity, unrelated information, threats, libel, defamatory statements, obscenities, pornography or that violate the law are not allowed. Comments that promote commercial products or services are not allowed. Comments in violation of this policy will be removed. Continued posting of comments that violate this policy will result in the commenter being banned from the site.