The hunt for moons outside our solar system has just turned up another possible lunar world, a moon bigger than Earth that's orbiting a Jupiter-like planet. by NPR/Nell Greenfieldboyce, Correspondent, Science Desk Tweet 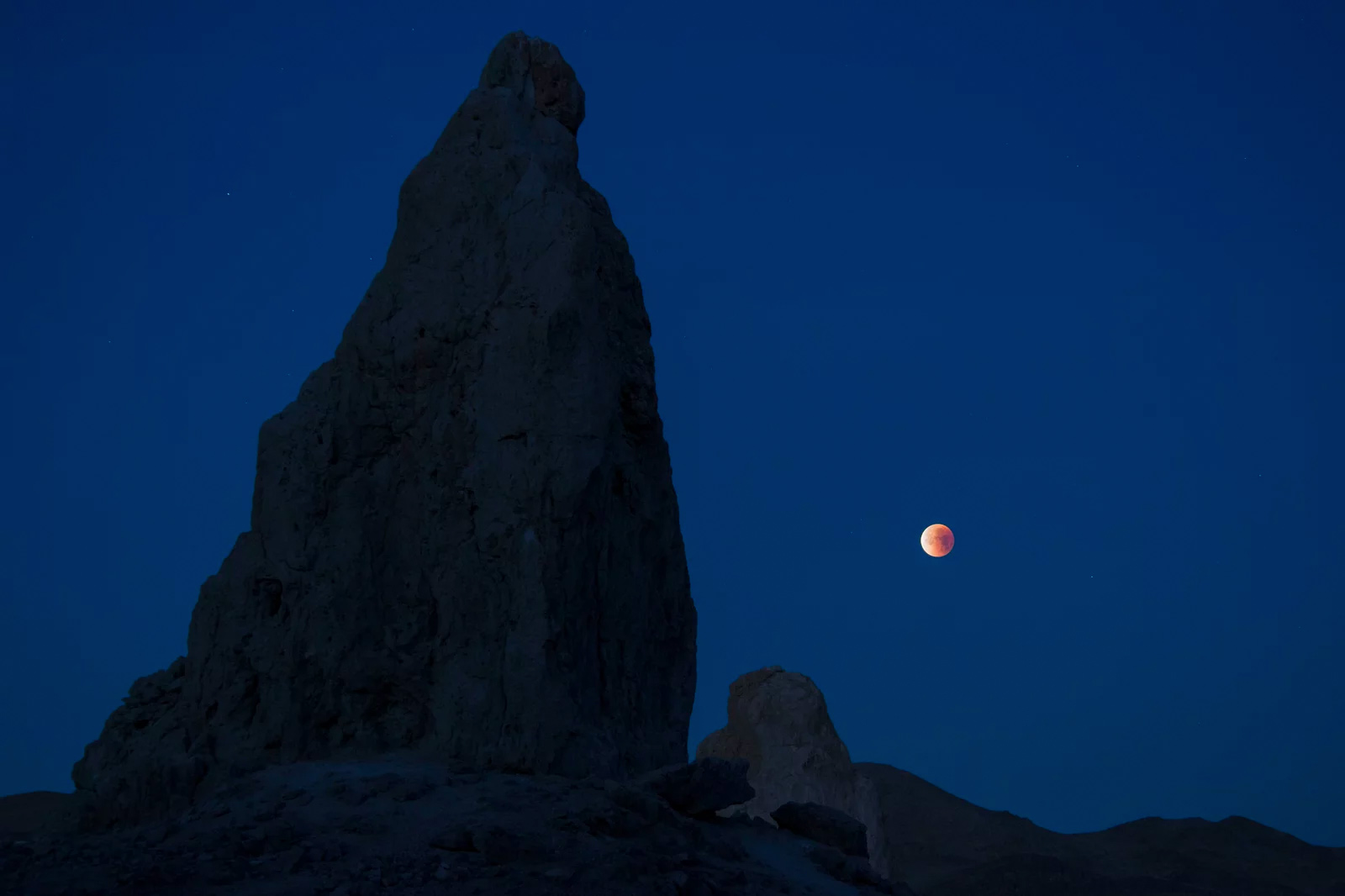 A lunar eclipse viewed from California's Trona Pinnacles Desert National Conservation Area. Scientists believe there may be more moons in the galaxy than planets.
NASA/Lauren Hughes/NASA/Lauren Hughes
The planet and its moon — if it really is a moon — orbit a Sun-like star that's over 5,000 light years away, according to a report in the journal Nature Astronomy.

This isn't the first time astronomers have spotted something that might be a moon in another planetary system, which is sometimes called an exomoon.

In fact, Kipping and his colleagues announced a few years ago that they'd detected something moon-like orbiting a different planet. That discovery has yet to be confirmed with additional telescope observations, and some astronomers are skeptical that it will hold up to more scrutiny.

Exomoons may be common, but they're hard to find

Moons outnumber planets in our own solar system, so it stands to reason that planets orbiting other stars would also have moons. Scientists want to find them, in part because a moon might have conditions that are right for life.

"If you've seen Avatar or Star Wars, you're probably familiar with this idea that moons, in and of themselves, could be habitable," says Kipping. And real-life moons like Jupiter's Europa and Saturn's Enceladus are believed to have features like liquid water that might sustain life.

"Finding these exomoons is extremely challenging," says Mary Anne Limbach, a researcher at Texas A&M University who also has been searching for moons. "These detections tend to be right at the detection limit. So it's often difficult to disentangle the noise from the exomoon signal."

Limbach thinks this new find, detected with the help of NASA's planet-finding Kepler telescope, is interesting. "Certainly, you know, I think the object, the event, does warrant further follow-up with space-based observatories," she says.

Others are also taking a wait-and-see attitude.

"All the Kepler data is public and we can be sure another team will independently analyze the data," says Sara Seager, a planetary scientist at the Massachusetts Institute of Technology. "This is a fascinating but perplexing discovery. We were not expecting moons larger than the size of Earth. This system, if real, is more like a double planet."

"I don't believe it yet, but I think it's certainly a promising candidate worthy of follow-up," says Laura Kreidberg, an astronomer with the Max Planck Institute for Astronomy in Germany.

Existing telescopes aren't powerful enough to let astronomers see moons in other planetary systems directly. Instead, scientists can only infer the presence of a moon. If they see a tell-tale pattern of dimming in a star, for example, that can mean a moon and its planet are passing in front of the star and blocking some of its light.

Finding "the biggest weirdos in the universe"

So far, astronomers have reported finding hints of exomoons about a dozen times using different techniques, says Limbach. Most of those observations, for technical reasons, can't ever be followed-up or confirmed, she added.

But other exomoon claims can, like this new one as well as one that Limbach and colleagues recently reported.

"But if they weren't freakishly large, we never would have had the capability of detecting them," he said. "So it's only natural that the first things you'd detect would be the biggest weirdos in the universe. They're not necessarily common, they're just the easiest for us to find."

New telescopes, like the recently launched James Webb Space Telescope and the Nancy Grace Roman Space Telescope that is scheduled to launch later this decade, will be much more capable of finding and confirming the presence of moons, even small ones.

Seager says astronomers would like to find evidence for a moon or supermoon around a planet orbiting a nearby star, because that would make it easier to do follow-up measurements.

The first confirmed moons in other solar systems will be exciting discoveries not only because they're moons and not planets, says Limbach, but also because, in many cases, they might be rocky worlds with the right kinds of conditions for life.

"I certainly think," she says, "this decade will hopefully lead to the first confirmation of an exomoon."

The newest Girl Scout cookie is feeling pain from the supply chain Watch Live: White House, Congress mark one year since a pro-Trump mob stormed the U.S. Capitol Mercedes' new electric concept car uses mushrooms and cacti to build its seats
By posting comments, you agree to our
AZPM encourages comments, but comments that contain profanity, unrelated information, threats, libel, defamatory statements, obscenities, pornography or that violate the law are not allowed. Comments that promote commercial products or services are not allowed. Comments in violation of this policy will be removed. Continued posting of comments that violate this policy will result in the commenter being banned from the site.