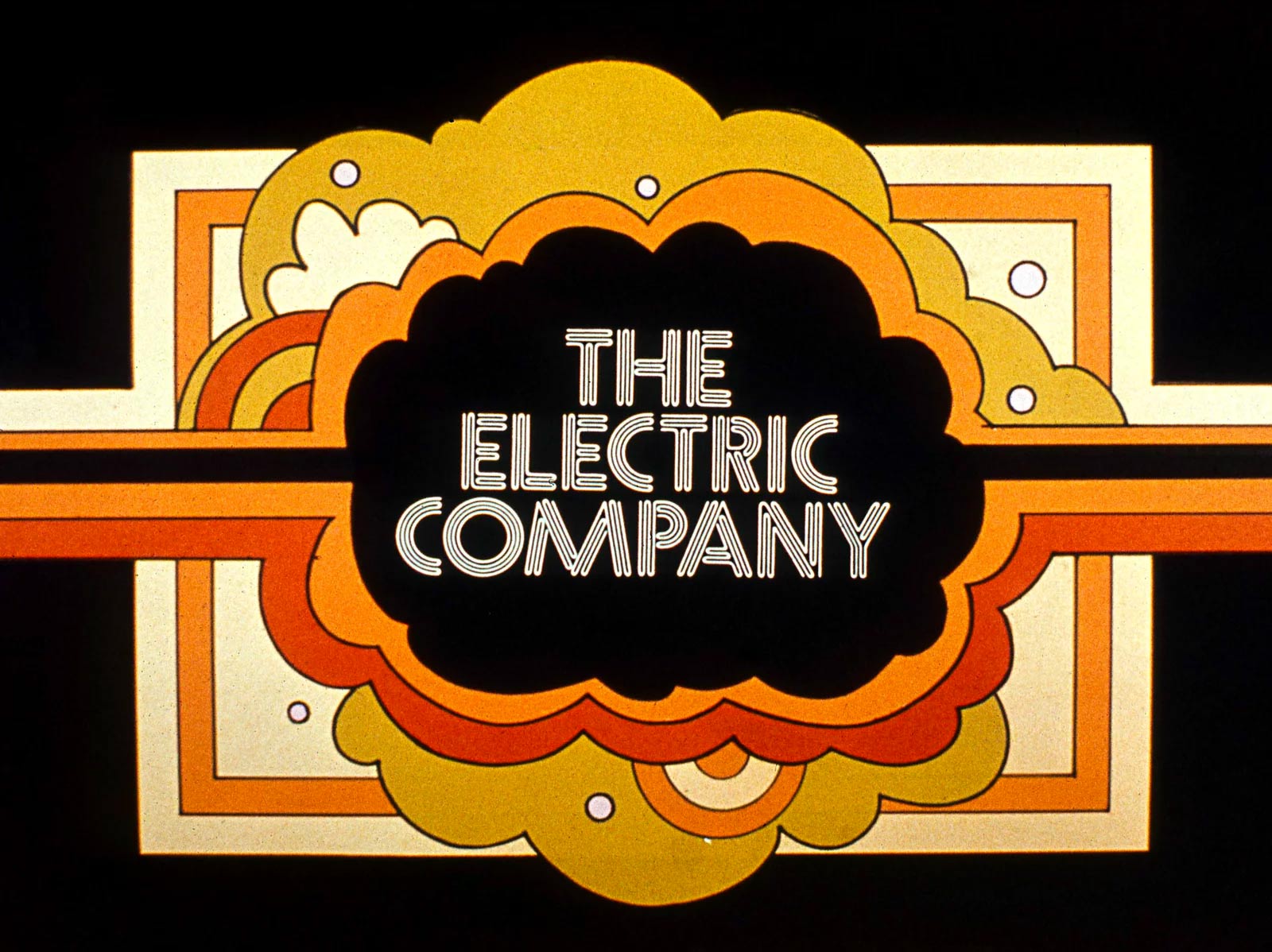 Courtesy of Sesame Workshop
When The Electric Company debuted in October 1971, television hadn't seen anything quite like it. Psychedelic graphics, wildly creative animation, mod outfits, over-the-top characters and sketch comedy all functioned to serve the same goal: teaching kids to read.

Brought to you by the Children's Television Workshop (CTW) — the same producers behind Sesame Street, which debuted in 1969 — The Electric Company won two Emmys, aired on more than 250 public TV stations and became a teaching tool in thousands of classrooms nationwide. 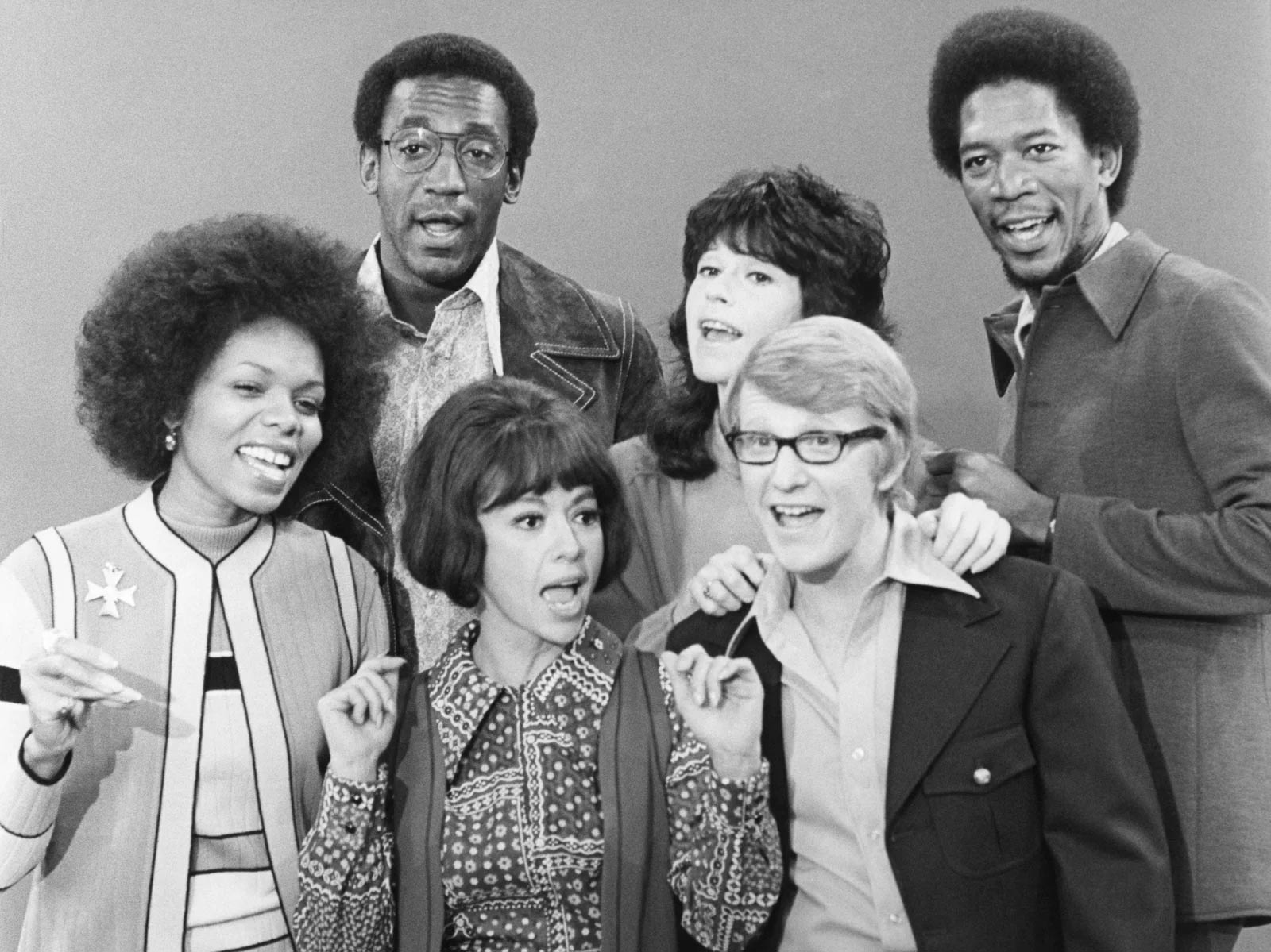 So with all that going for it, why did The Electric Company run out of juice? The answer shines a light on the fate of many a public media endeavor where making money is as important as the mission statement.

The Electric Company's target audience was elementary school students who were too old for Sesame Street but still needed help learning to read. According to a report by CTW, "Government estimates showed that illiteracy was a problem for as many as one out of ten Americans" and that "Millions more" were "described as 'functional illiterates.' " Joan Ganz Cooney, CTW's president, explained that a project to help older children with reading was "requested by the U.S. Office of Education, whose 'Right to Read' campaign sought to achieve universal literacy in the 1970's."

"What we needed to worry about were the people falling behind," remembers TV writer and producer Samuel Gibbon, who was pulled off his job on Sesame Street to oversee The Electric Company. "If you're falling behind in the second and third grade, your prognosis is not wonderful, so we tried to correct that problem at its origins." 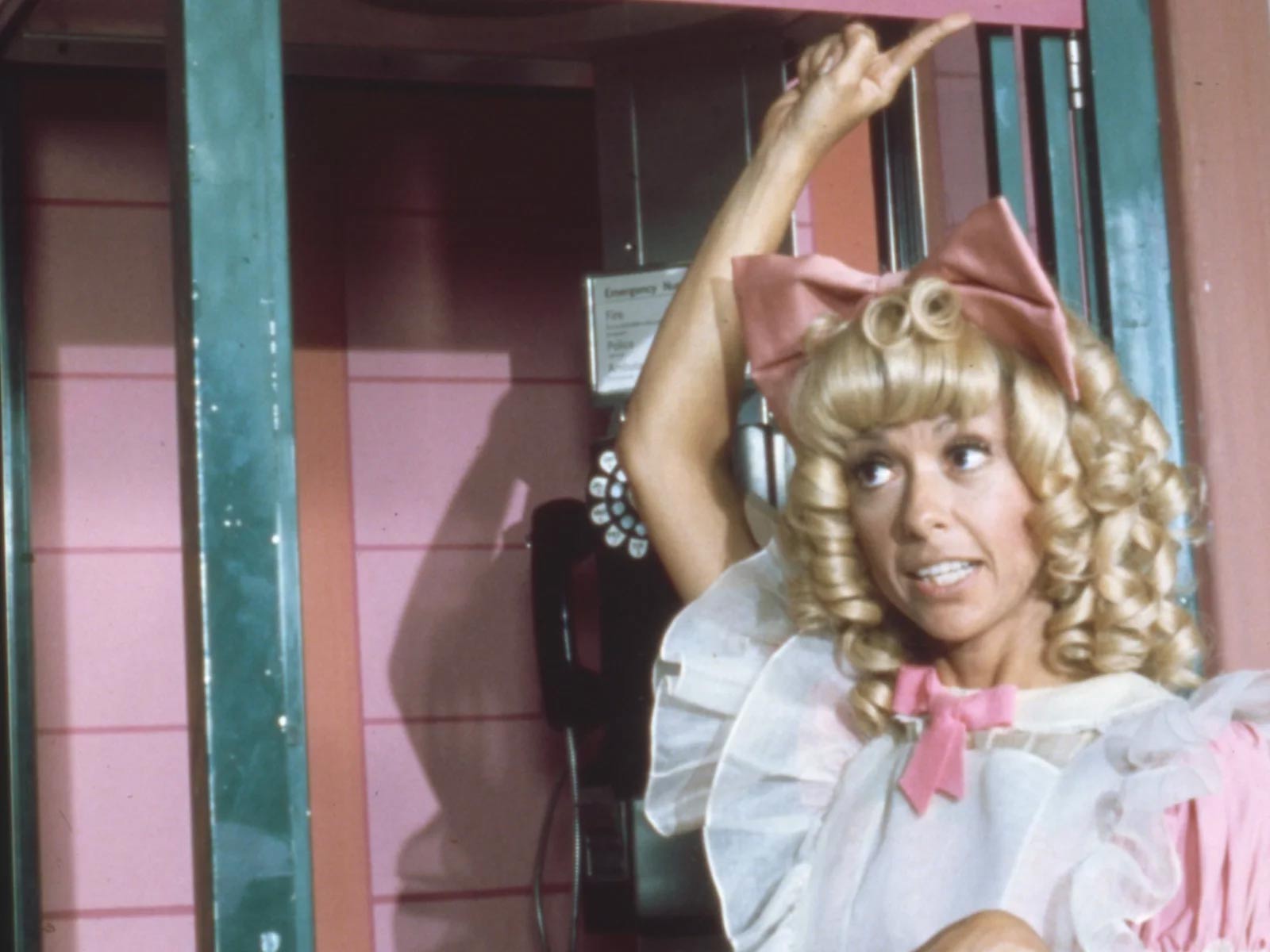 Rita Moreno played a variety of roles on The Electric Company.
Courtesy of Sesame Workshop

Gibbon and a team of TV writers and producers, reading experts and other academic advisers spent 18 months doing research and developing the show before it went on the air. These days, that's business as usual for educational TV shows, but back in 1971, this was new. Despite the success of Sesame Street, "most people thought it was anathema to try to use television to teach kids to read," remembers Barbara Fowles, who was part of The Electric Company's research team. "Teachers thought television was really horrible."

Plus, as Cooney wrote in 1976, "few of the experts agree on how to teach reading in the classroom, even under ideal circumstances."

Fowles was in graduate school studying developmental psycholinguistics when she was hired to work on The Electric Company. She says segments in the show used "a lot of phonics, teaching the sounds of the letters and the relationship between the printed letter and the sound."

One regular segment showed the silhouettes of two faces looking at each other. As they sound out the beginning and end of each word, the letters float out of their mouths and form the word in the middle of the screen. Comedy sketches helped kids learn to decode words and identify patterns.

A few months after The Electric Company went on the air, NPR's Susan Stamberg interviewed students who'd been watching the show. Lynette Murray of Washington, D.C., who was 12 years old at the time, marveled at the power of the silent "e."

But 11-year-old Sherri Pressley told Stamberg she had trouble keeping up with the show's pace. "I enjoy it, but it's so fast, I hardly have time to think over the sentence," she said. 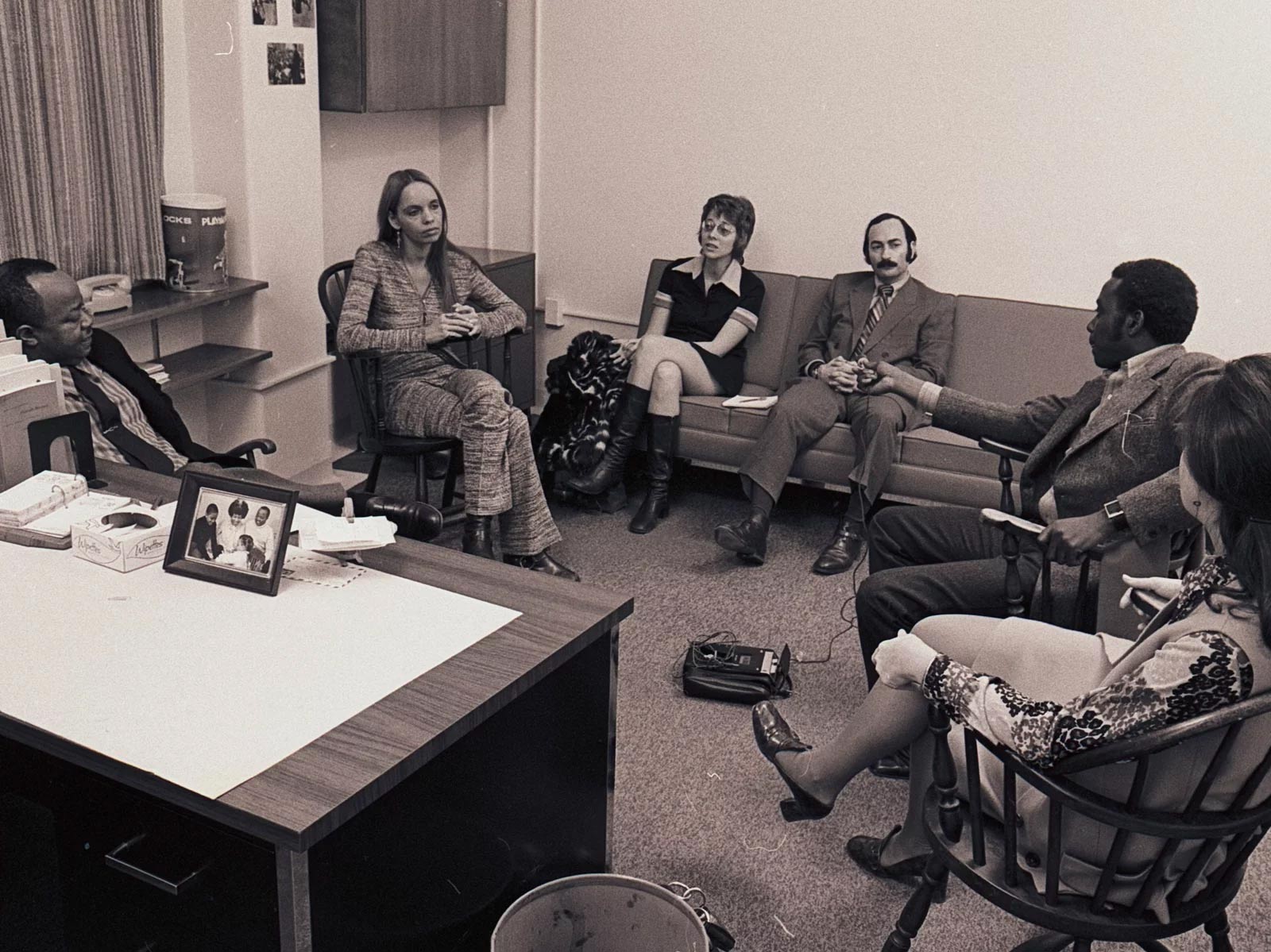 Writers and researchers for The Electric Company, including Barbara Fowles (second from left), sought to educate through entertainment.
Courtesy of Sesame Workshop

"We thought of [The Electric Company] as a comedy show that tried to teach," says Gibbon. But, he acknowledges, "there was a constant tension between the writers and the curriculum people, as you would expect." Fowles agrees: "We did a lot of kind of wordplay, which I think was probably a mistake."

Given that the target audience was kids who were falling behind, Fowles believes much of the material was over their heads. "It was often hard to get the writers to sort of dial it back, to convince them that they were little children," she remembers.

Take the detective character Fargo North, Decoder (get it?), who would solve missing-letter mysteries. "Kids don't know Fargo, North Dakota," Fowles points out. "They don't think it's funny. They don't get it." Even though much of the material was "hilarious," she says, it might not have been "if you're 7 and having trouble in school and at home." One writer joked that being asked to do two funny minutes on the consonant blend "fl" was a nightmare.

Cast member Judy Graubart came to The Electric Company from The Second City in Chicago. Her myriad characters included Jennifer of the Jungle, Julia Grown-Up and The Witch. She says that as a comedian, being told to slow down and "linger on the word on the screen" could be awful. But she's immensely proud that she and the other actors "were all teachers and just had to show that the learning was fun." 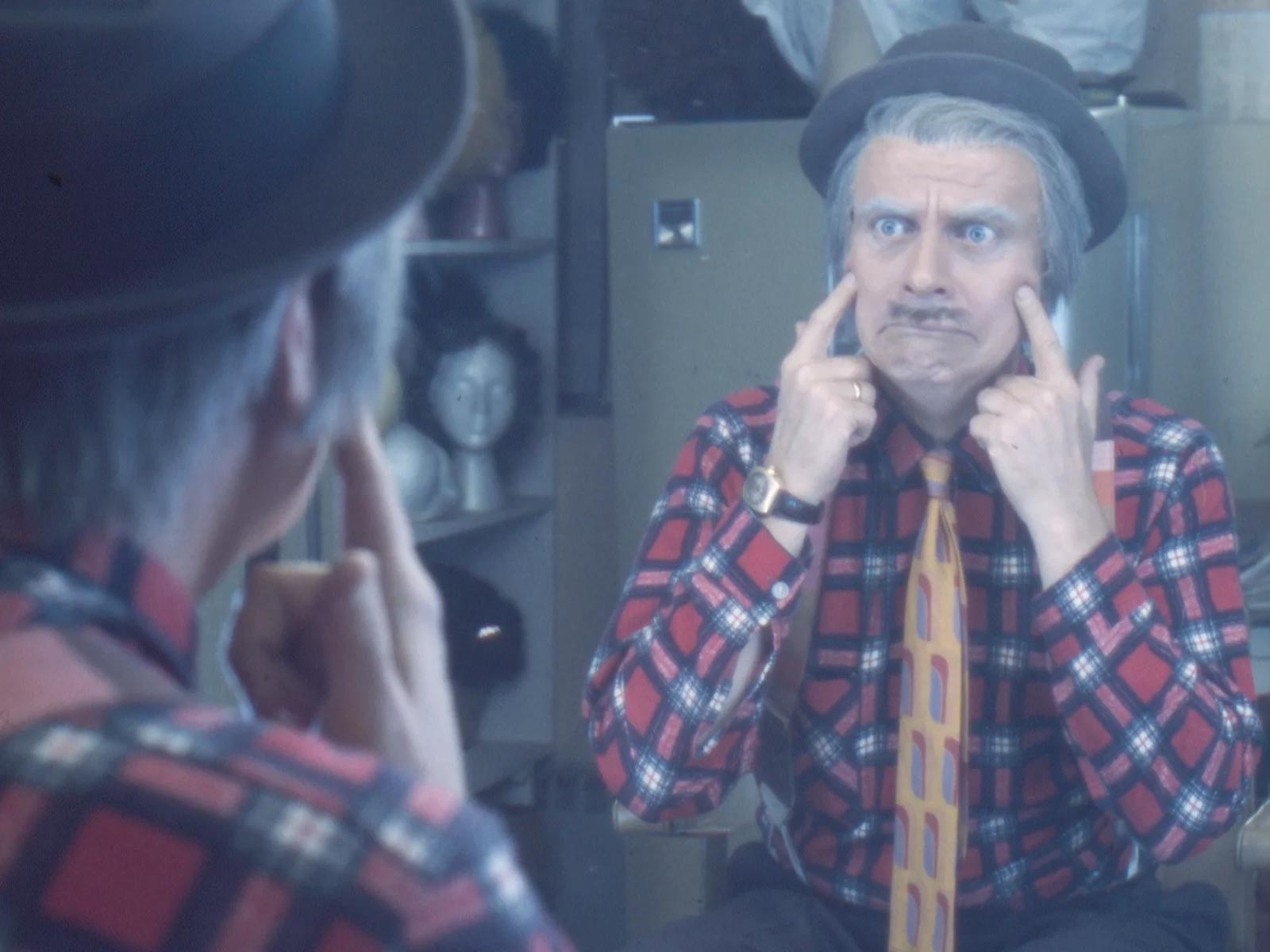 Actor Jim Boyd prepares for his role as J. Arthur Crank on The Electric Company.
Courtesy of Sesame Workshop

For all of the challenges going on behind the scenes, The Electric Company was considered a success. According to a 1977 report by the Educational Testing Service, "The program had a clear and significant impact on its primary target audience – second grade children who were in the bottom half of their class as indicated by standardized reading test scores – indicating the program was an effective instructional supplement for children who were beginning to experience reading difficulty."

In other words, The Electric Company didn't have the kind of merchandise possibilities that could compete with Tickle Me Elmo.

The cast and crew moved on. Morgan Freeman went on to become the voice of God. Bill Cosby would run into serious legal troubles. The comedy writers went on to work on successful grown-up TV shows.

Rita Moreno recently reflected on the experience of entertaining to educate in an interview with Terry Gross of WHYY's Fresh Air. "I have lots of fans from that time in my life, loads of them," she says. "I always saw The Electric Company as a community service on my part. And we really, really worked very, very hard. But it was absolutely worth it. It was such a wonderful, wonderful experiment."

That experiment went on to inform dozens of educational shows that came after it; reruns, a reboot and a DVD release continued into the 2000s. But for the most part, The Electric Company eventually ran out of juice.

Watch Live: House January 6 committee holds public hearings on its investigation WATCH: President Biden delivers remarks after Supreme Court overturns Roe v. Wade This Louisiana man thought he was rescuing one kitten — then 12 more appeared
By posting comments, you agree to our
AZPM encourages comments, but comments that contain profanity, unrelated information, threats, libel, defamatory statements, obscenities, pornography or that violate the law are not allowed. Comments that promote commercial products or services are not allowed. Comments in violation of this policy will be removed. Continued posting of comments that violate this policy will result in the commenter being banned from the site.