The awards, in their fourth year, received entries from 105 countries and 2,900 professional and amateur photographers. by NPR/Suzette Lohmeyer Tweet 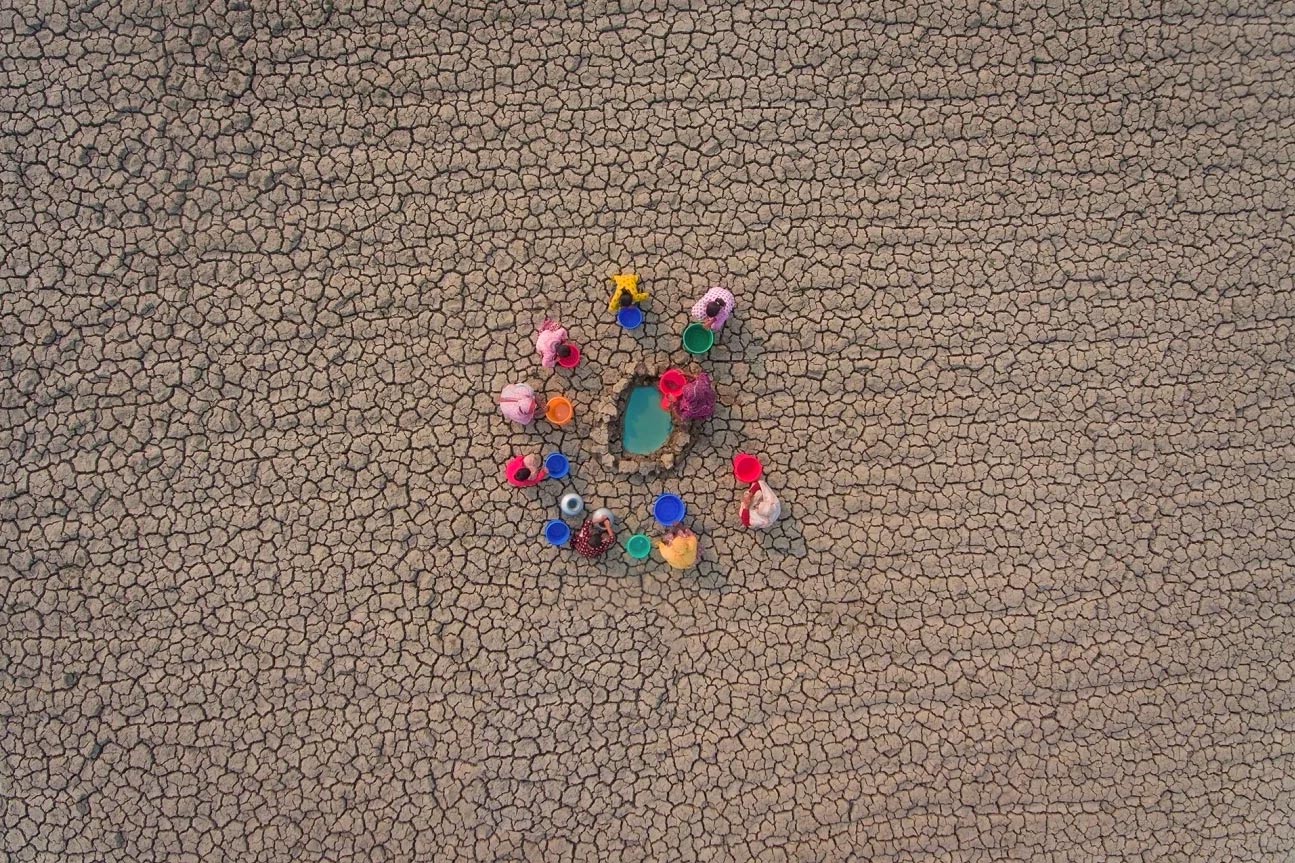 Women collect water from a dry riverbed in Khulna, Bangladesh. This photo was one of the "highly commended" images from this year's Drone Photo Contest.
Sujon Adhikary
What does our planet look like from the sky?

The winning images of this year's Drone Photo Awards capture a dizzyingly fantastic view of the world. From high above, a field of bright green grass in Vietnam looks like faux fur – and a frozen reservoir in Kazakhstan resembles shards of broken glass.

The awards, in their fourth year, received entries from 105 countries and 2,900 professional and amateur photographers, says Luca Venturi, contest founder and art director of Siena Awards, a group based in Siena, Italy, that organizes international photo competitions.

The availability of cheaper and better drones over the past few years have helped popularize this style, especially among amateurs, says Ken Geiger, a Pulitzer Prize-winning photographer and one of this year's judges for the awards. Not only is drone photography "fabulously fun," he adds, "it's an avenue of expression helping us learn things about our planet that we never knew before."

The contest is open to all kinds of aerial photography, not just taken with drones but also blimps, kites, parachutes, helicopters and even hot air balloons. 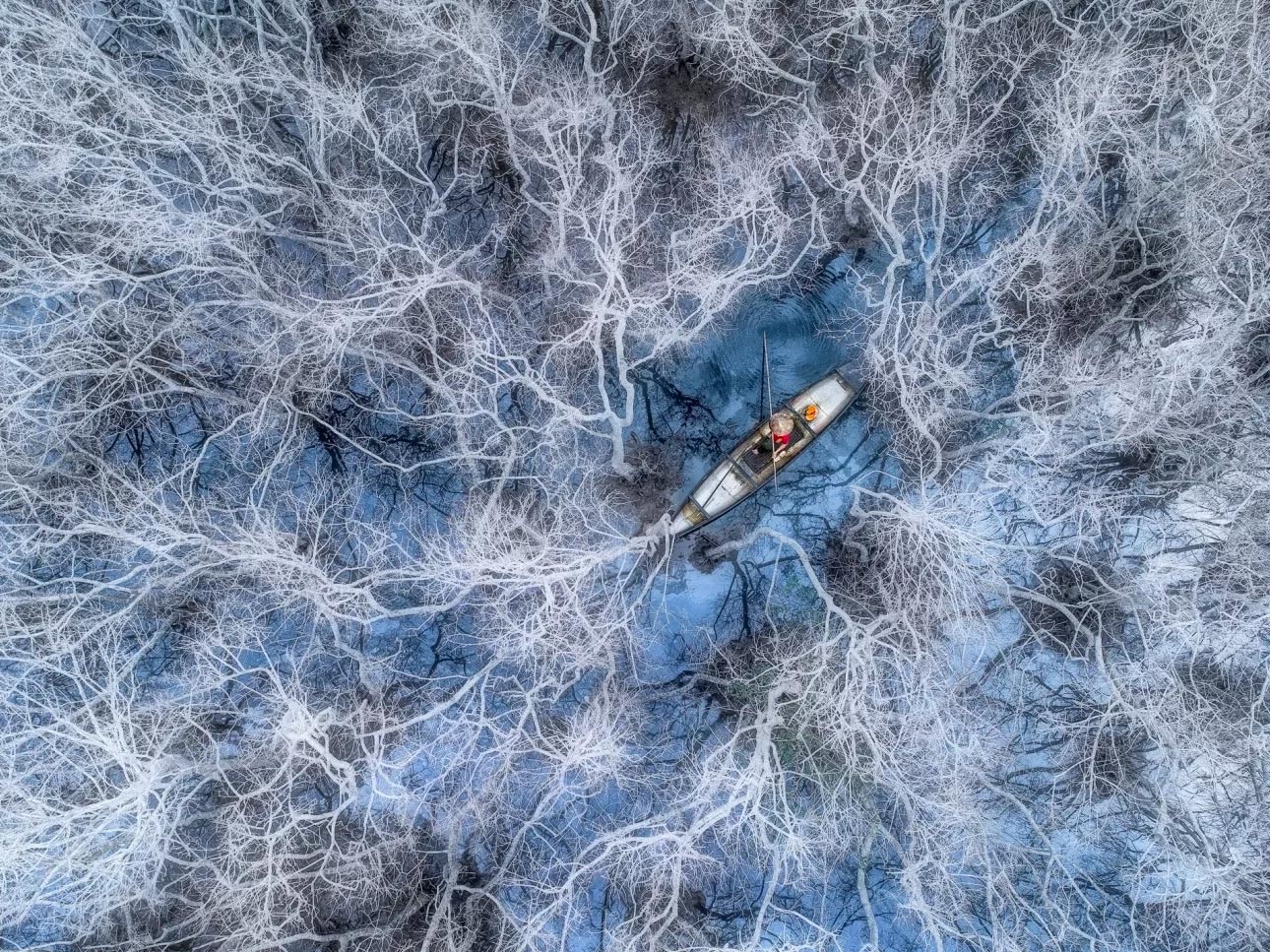 A former engineer, Trung says he is practical when he uses drones to take photos, always checking wind and fog levels before setting out as both can affect the quality of the photo. His ultimate goal, he says, is to find moments when a person "feels tranquility with the universe, inside and out."

Scale and color play an important role in this photograph. "The forest's white color showcases how spectacular nature is, while the red color of the fisherman's clothing represents the beauty of humans," says Trung. "Small and big, red and white — many more things should be [in harmony] together in life." 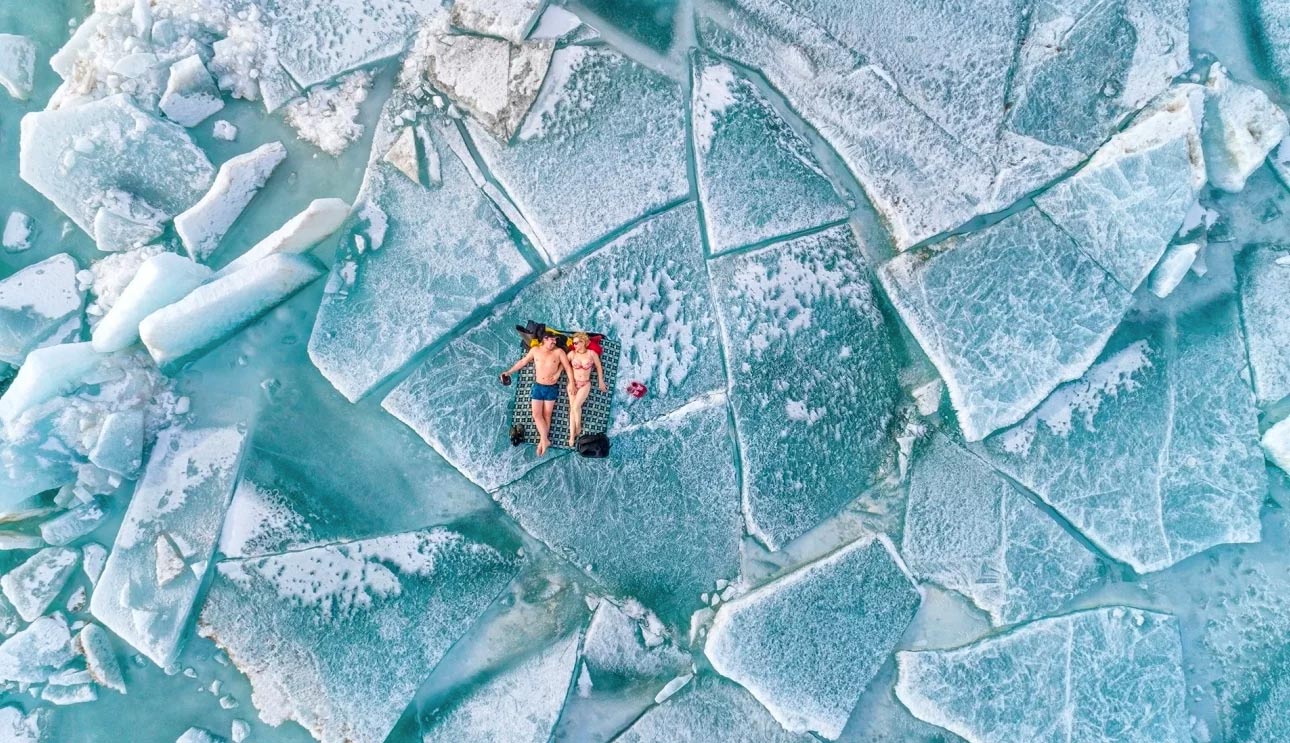 Photographer Alexandr Vlassyuk and a friend "sunbathe" on ice hummocks at the Kapchagay reservoir in Almaty, Kazakhstan. "Without waiting for summer, we decided to open the beach season!" says Vlassyuk.
Alexandr Vlassyuk
In the photo "Beach Season," taken at a reservoir in Almaty, Kazakhstan, Alexandr Vlassyuk is both photographer and subject — a task he says was no small feat. He was operating the drone while posing with his friend on ice hummocks at a temperature of 14 degrees Fahrenheit. Both were nearly naked. Oh, and it was windy, he adds.

"The shooting turned out to be quite difficult," says Vlassyuk, an advertising photographer with a passion for landscapes. "I took a series of shots with two drones. Batteries were running low. In order not to freeze, we had to periodically warm ourselves up with hot tea."

Geiger says he loves the concept. "It's just so over the top that I couldn't help but vote for it. It made me smile." And the "pop of people and color" amid the broken-up ice, he says, "creates a strong entry point" for viewers. 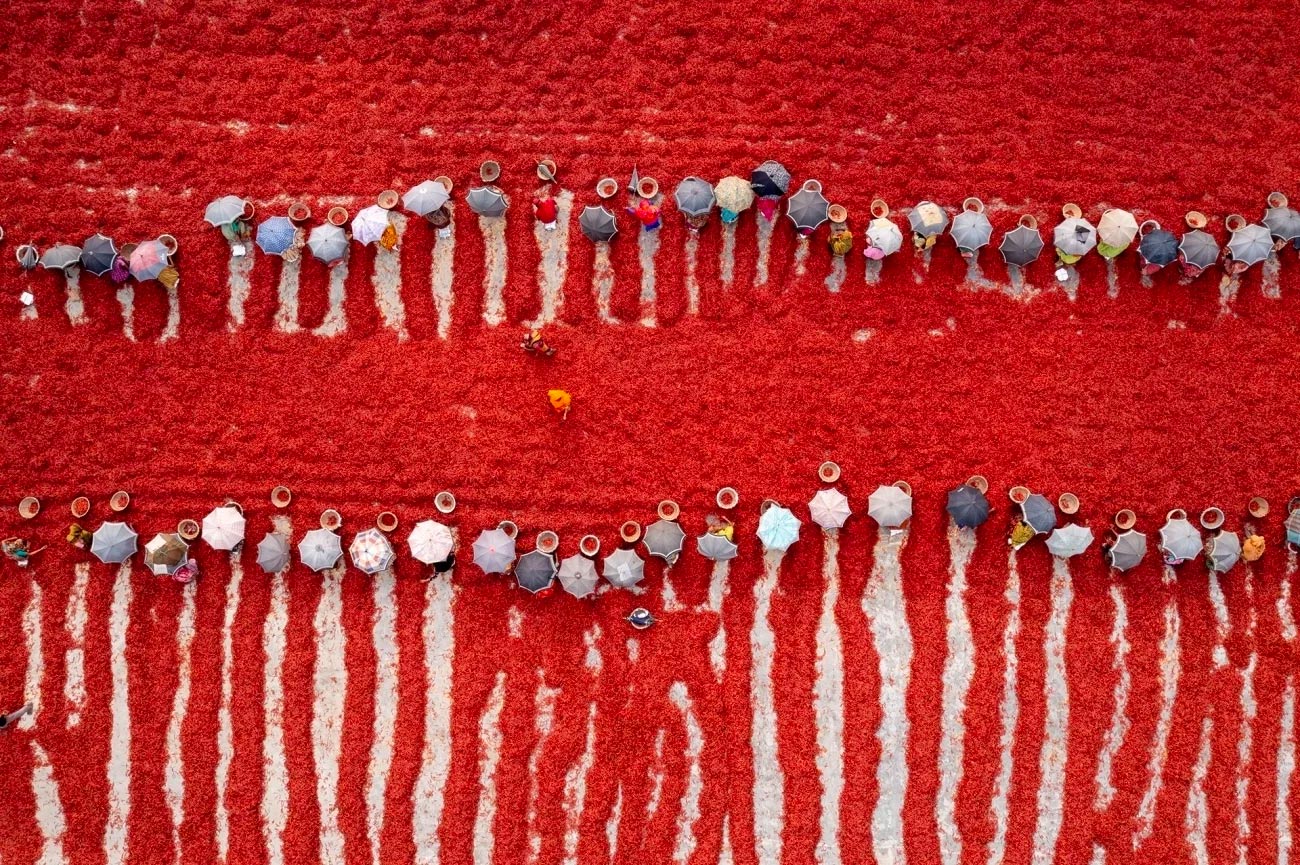 Women sort dry red chiles at a factory in Bogura, Bangladesh. "Bogura's chiles are famous around the country," says photographer MD Tanveer Hassan Rohan. But the workers only get paid "$2 after 10 hours of work – and in some places they get less."
MD Tanveer Hassan Rohan
MD Tanveer Hassan Rohan, a freelance photographer from New York, has always tried to get photos from the highest places possible — way before drones came into the picture. "I try to find a place where I can see the area from the top," like a rooftop, he says. "It allows me to really see that location."

When commercial drones became available, he says, he knew he had to have one. "I try to avoid gathering where many photographers fly drones. Sometimes I go to unknown places and fly my drone from a safe location to see what I can find."

One of those places is the courtyard of a chili factory in Bogura, Bangladesh, a little over 100 miles from where Rohan grew up in Dhaka. His photo "Red Chiles Harvesting" captures two lines of women sitting underneath umbrellas as they sort through a carpet of bright red chiles to be dried and preserved.

Other sky-high winners and commendations 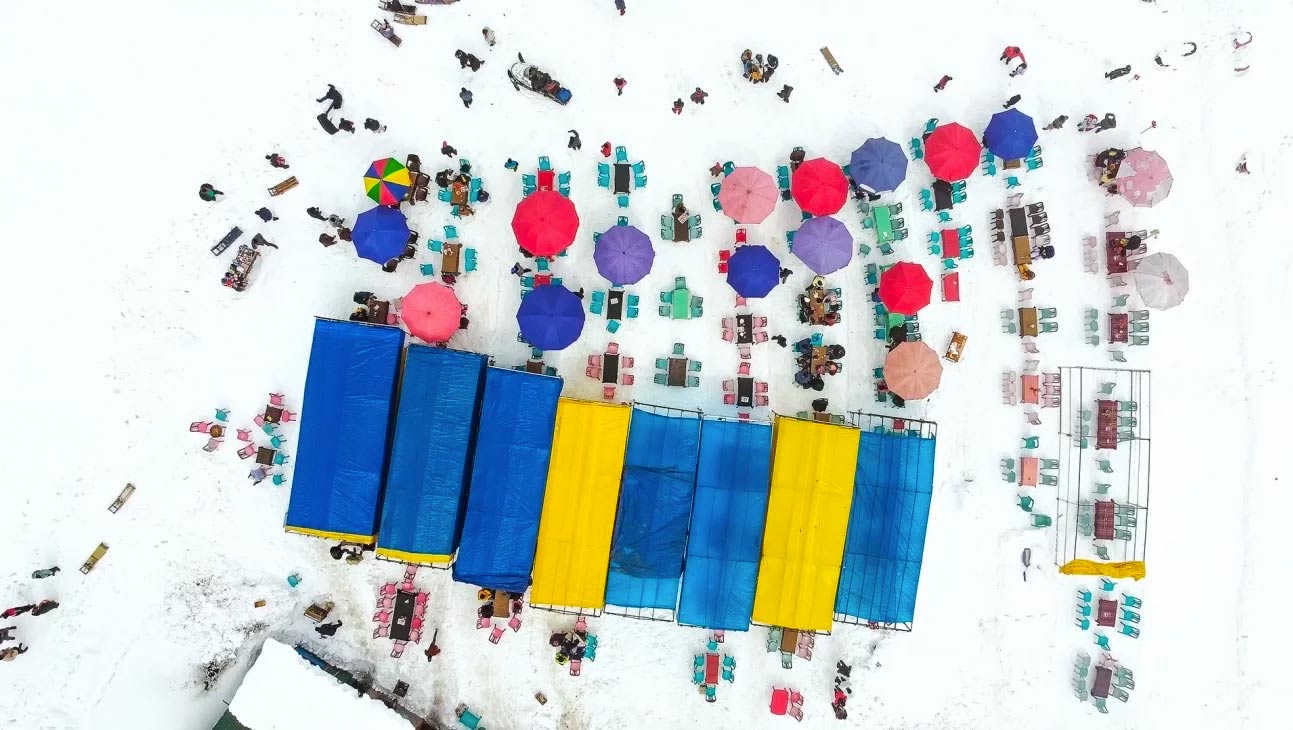 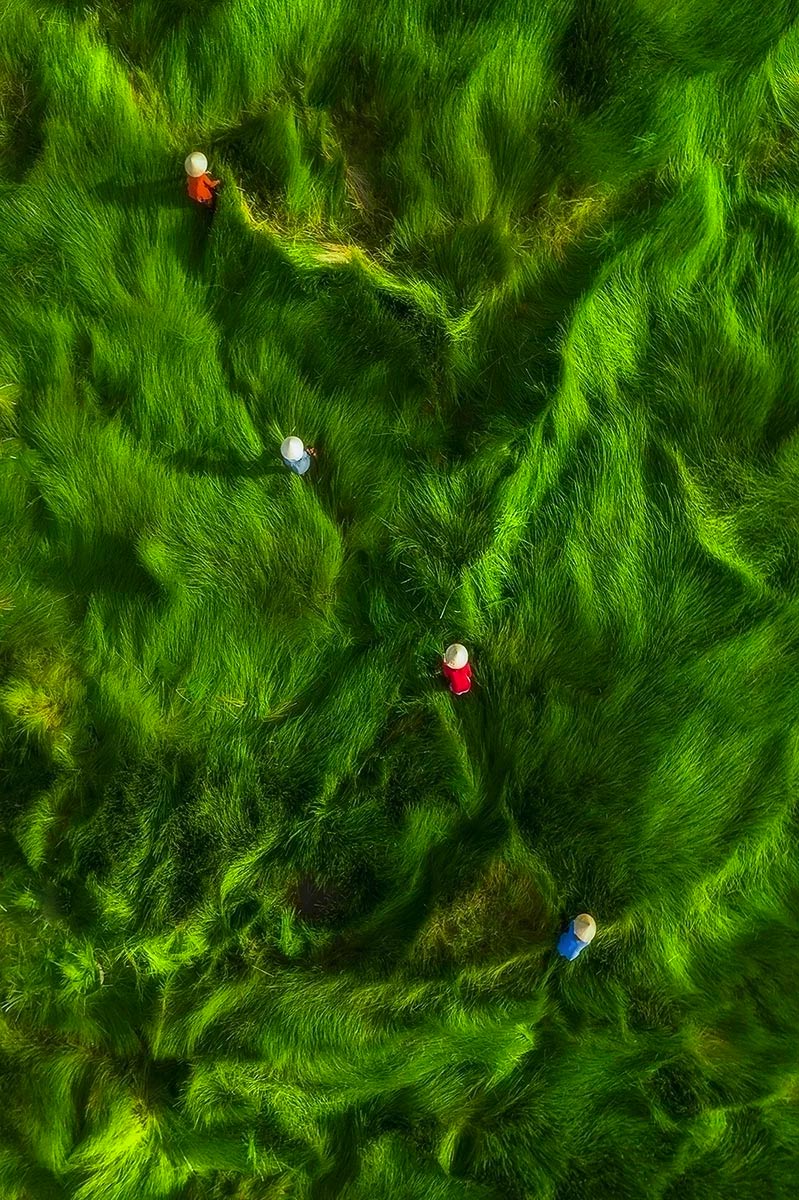 Women harvest grass in Vietnam. The grass has many uses, including as fodder for animals and fertilizer.
Khanh Phan 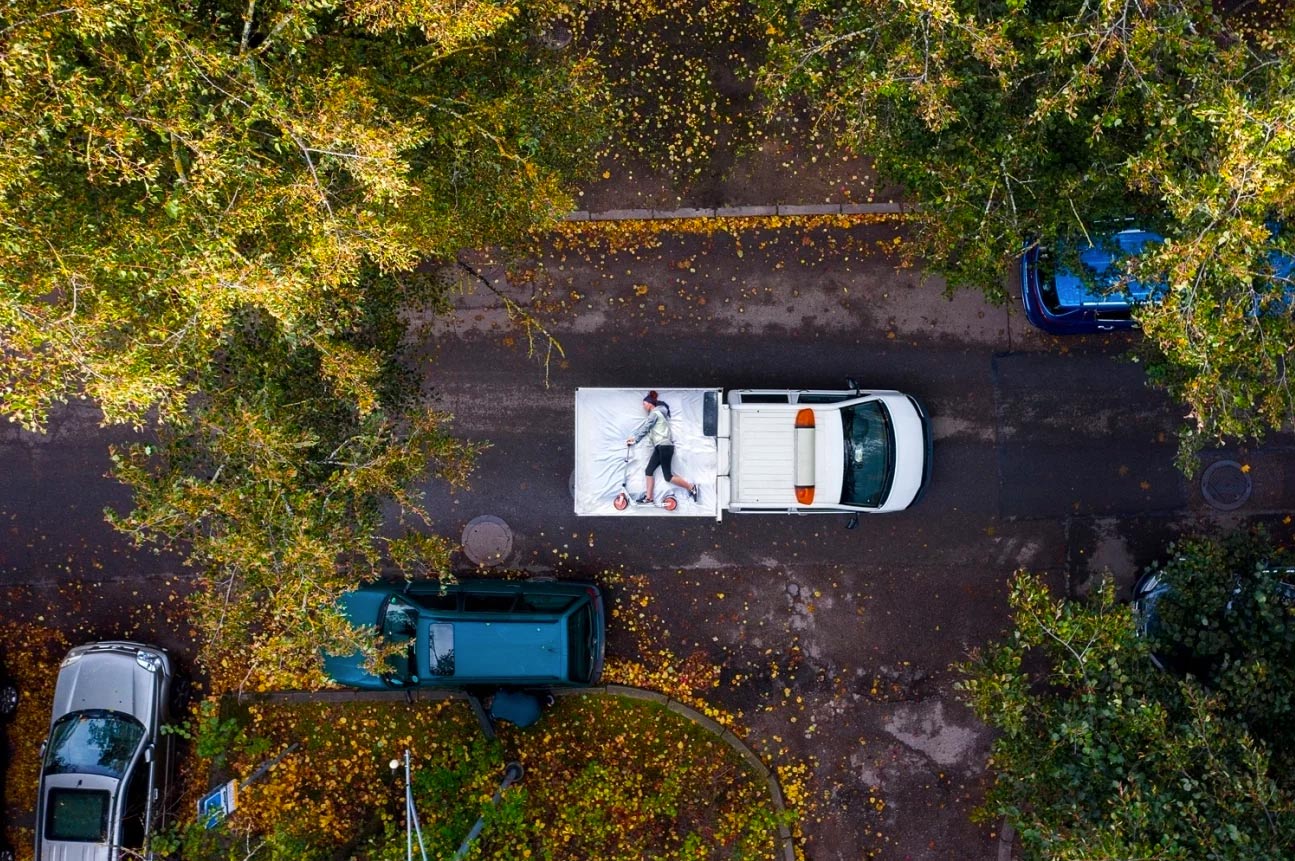 A photo from Adas Vasiliauskas' series "COVID Self-Isolation Sucks," which earned a commendation from this year's Drone Photo Awards. The set of images, taken on the streets of his native Lithuania, plays on people's desire to "live life" despite living in a "COVID nightmare," he says. In this particular photo, a man posing on the bed of a truck pretends to ride his scooter.
Adas Vasiliauskas
MORE: NPR News

A librarian collects all the things left in books — from love letters to old photos Fiona the Hippo gets a little brother Watch Live: House January 6 committee holds public hearings - Day 7
By posting comments, you agree to our
AZPM encourages comments, but comments that contain profanity, unrelated information, threats, libel, defamatory statements, obscenities, pornography or that violate the law are not allowed. Comments that promote commercial products or services are not allowed. Comments in violation of this policy will be removed. Continued posting of comments that violate this policy will result in the commenter being banned from the site.