Could Super-Absorbent Gel Save Millions Of Gallons Of Water In The Desert? 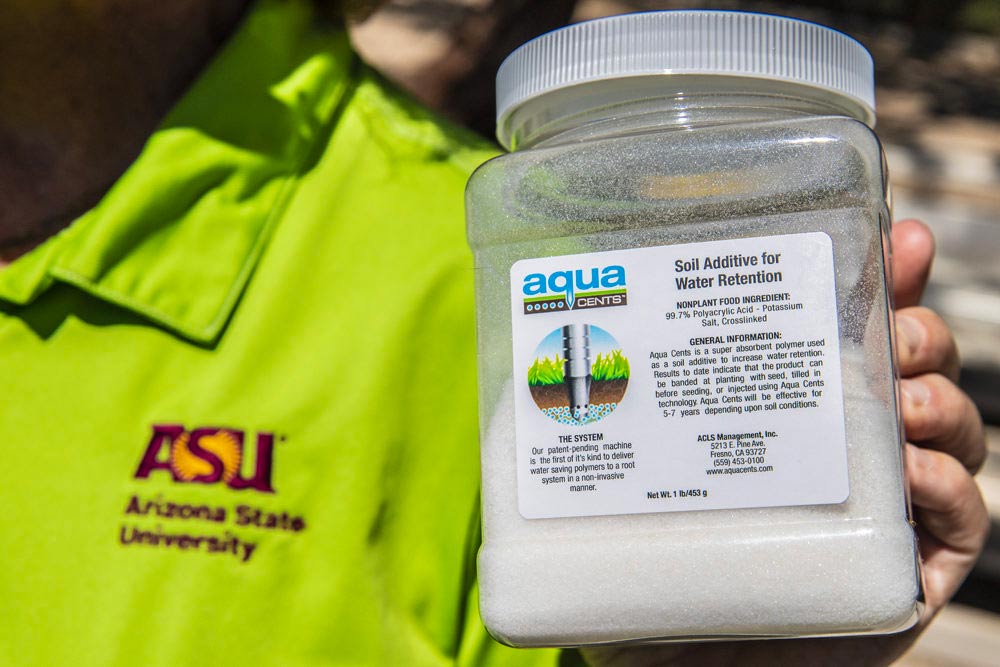 This is the "hydrogel" technology that ASU will put underneath the soccer fields. It holds onto the irrigation water and slowly releases it over time. It could save 45% of the 11 million gallons the fields drink up every yea
(Richard Holland/ASU)
The Colorado River provides water for 40 million people across seven states — and it’s running dangerously low.

Next year, Arizona and Nevada will face their first-ever restrictions that limit the amount of water they can pull from the river. The warming climate almost guarantees this will be a long term problem.

ASU’s Jo Ellen Alberhasky recently received a grant to put the super-absorbent polymer underneath one of the university’s soccer fields. She says the gel is placed below the grass’ root zone, and as the gel gets wet, it sucks up the water and holds onto it.

The hydrogel, which can last five to seven years, can “release up to 96% of that water to the roots as the grass needs it,” she says.

Alberhasky says the Center for Irrigation Technology at California State University, Fresno studied the gel for a year on fields in California's Central Valley and found they used about 45% less water. It’s a substantial percentage considering the ASU West soccer fields can drink up to 11 million gallons of water every year — equal to about 16 or 17 Olympic-sized swimming pools.

The grant will let researchers test the hydrogel’s success in the Phoenix metro area, which has a similar climate to Central Valley, Alberhasky says.

On ASU’s 12-acre field, the gel may be able to save a few million gallons of water a year. But the city of Phoenix is gigantic — and thirsty. Kathryn Sorensen, who is working with ASU on the project, is also responsible for keeping the entire city hydrated as Phoenix’s water director. 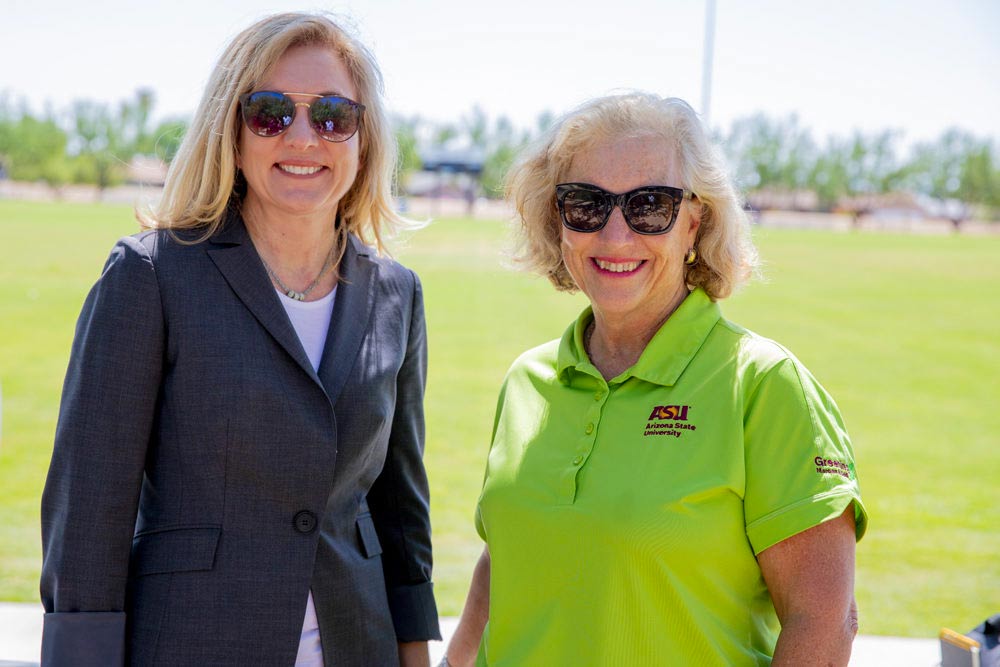 Kathryn Sorensen (left) is water director for the City of Phoenix, which provides water to 1.7 million people. Jo Ellen Alberhasky is the ASU researcher who brought the technology to the soccer fields at ASU West.
Richard Holland/ASU

To provide 1.7 million residents with clean drinking water, Sorensen says roughly 60% of the city’s water comes from the local Salt and Verde River system, a little less than 40% comes from the Colorado River, and then the remaining comes from groundwater.

Phoenix, a sprawling desert city, is getting drier and experiencing longer droughts as a consequence of climate change. The hydrogel could be one solution in Sorensen’s plan for the future.

“Conservation is really the bedrock of all of our water resource planning here in the city of Phoenix. And as we face a hotter and drier future, we have to continue to innovate in this area,” she says. “And how this fits in is that about 60% of the water use at a single-family residential home goes toward outdoor landscaping, not necessarily turf but in some cases turf. And we want to make sure that as people use water outdoors they use it as efficiently as possible.”

Sorensen says depending on how the grant research goes at ASU’s soccer field, the gel could be used under turf in city parks and front lawns across the city — which can yield “pretty significant savings.”

Climate change is shifting the way residents use water, she explains.

“Back in the ‘70s, when I grew up, about 80% of single-family homes had majority turf landscaping. It was very prevalent back then,” she says.

“Nowadays that number is actually closer to 10%. So people have, for the most part, moved to xeriscape and we're very appreciative that it saves a lot of water," she says. "We've seen our water usage fall as a result of that, but for those who do still have turf, we want to make sure they're using it very efficiently.”

The excessive heat isn’t just changing landscapes. The “over-allocation of the Colorado River” — which is now part of a drought contingency plan — worries some city officials like Sorensen.

“The entire city of Phoenix, all 1.7 million people we serve, we use about 300,000 acre-feet of water a year. The Colorado River is over-allocated by about 1.5 million acre-feet a year. That's five Phoenixs,” she says. “That's a very big problem.”

On the contingency that the Colorado River may run dry, Phoenix is spending roughly $500 million to build new infrastructure to move water from the Salt River and Verde River to the communities who normally rely on the Colorado, she says.

“We want to make sure our water system is extremely resilient that we can move water wherever it needs to go across our service territory to make sure people have water when they need it,” she says.

Last year, Sorensen spoke to Congress’ Committee on Energy and Natural Resources, calling the outlook along the Colorado River system “terrible.” As the sweltering heat and dryness continues, she says scientists predict the river’s flows may shrink by as much as 25% over time.

The drought forces her and her team to get innovative and “plan methodically” to avoid a widespread public health emergency. The multi-million-dollar investment is the city’s commitment to reliable infrastructure and delivering clean water.

As the city adapts to record-high temperatures, Sorensen says Phoenix will “make sure that we have the water, the infrastructure, the water conservation — everything it takes to ensure a resilient future for our community.”

Peter O'Dowd produced and edited this interview for broadcast with Kathleen McKenna. Serena McMahon adapted it for the web.

After Years Of Detecting Land Mines, A Heroic Rat Is Hanging Up His Sniffer
By posting comments, you agree to our
AZPM encourages comments, but comments that contain profanity, unrelated information, threats, libel, defamatory statements, obscenities, pornography or that violate the law are not allowed. Comments that promote commercial products or services are not allowed. Comments in violation of this policy will be removed. Continued posting of comments that violate this policy will result in the commenter being banned from the site.