Meet The Womanikin, The Breasted Vest Working To Close The CPR Gender Gap

The idea behind this breasted vest is to address gender disparities in training and performance of CPR, which is vital for anyone experiencing cardiac arrest. by Rachel Treisman/NPR TWEET SHARE 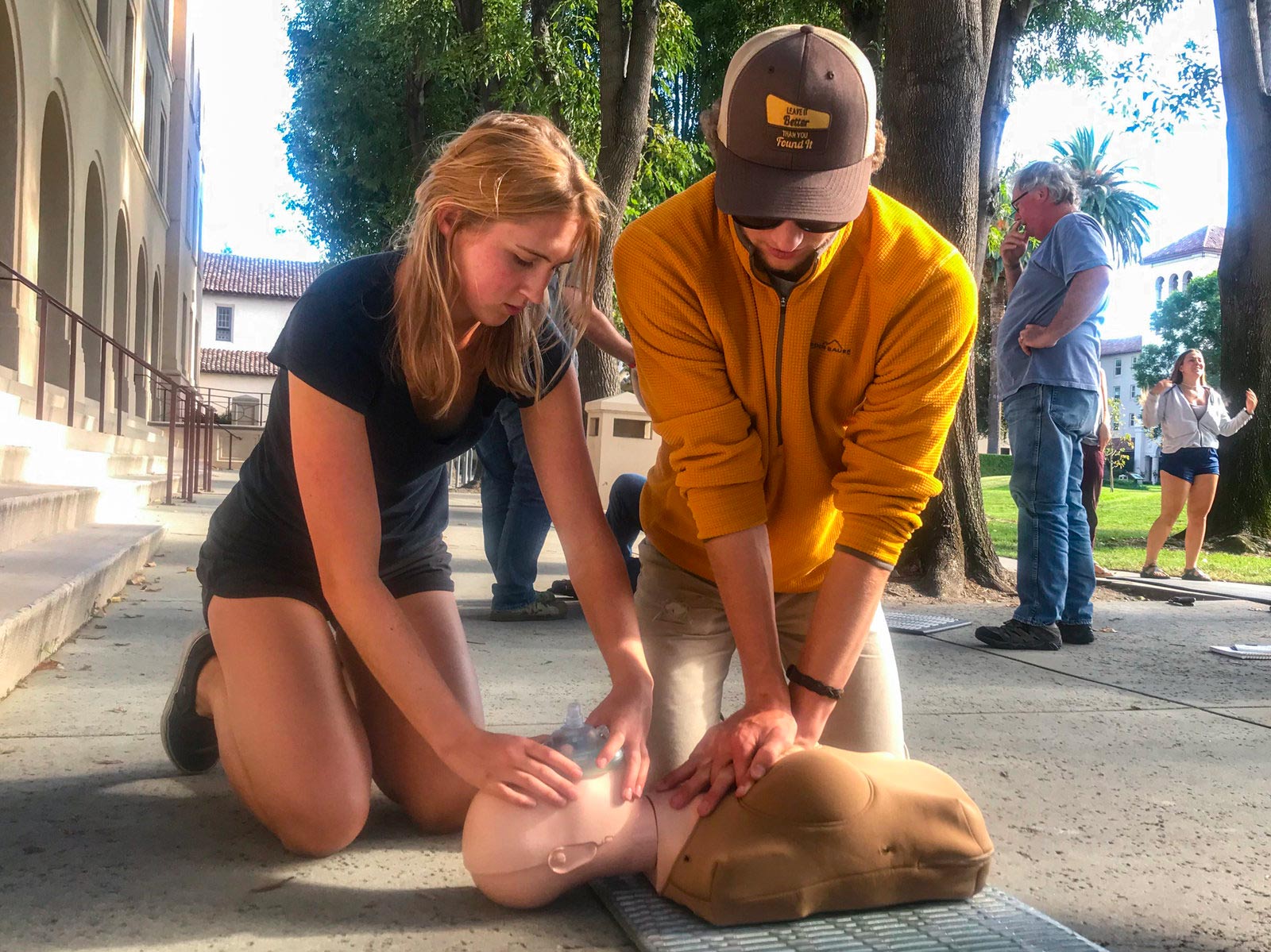 Students in Alice Henshaw's Wilderness Medical Associates CPR training courses can practice on a Womanikin, designed to help trainees understand that compressions should be performed the same way on women's bodies as men's.
Alice Henshaw

The American Heart Association has formed an all-female working group of resuscitation experts to think about how to decrease disparities in gender, race and ethnicity in CPR training and application, Leary says.

According to Comilla Sasson, the association's vice president for science and innovation for emergency cardiovascular care, the group will channel their findings into the new 2020 AHA guidelines for CPR and emergency cardiovascular care, which will be released next October. These guidelines will have national reach, Sasson says, because the AHA trains the country's health care providers.

The same technique on every body shape
Some instructors have already started addressing gender disparities in CPR training. Since the Womanikin's June launch, Sarah Collinson, head of account management at Joan Creative, says the company has manufactured ten attachments and published an open-access tool kit enabling anyone to make their own.

While most of the existing attachments remain at Joan's office for use at events and CPR classes, four are being piloted at training schools in Canada, Switzerland, and New York.

Wilderness EMT Henshaw, a lead instructor at Wilderness Medical Associates in New York, started using a Womanikin in August after her employer asked her to test it out.

While Henshaw thinks the Womanikin is a great training tool and conversation starter, she has chosen not to draw attention to it in her classes. She simply makes it available for drills and is prepared to talk about what it represents if anyone asks. Putting too much emphasis on exterior differences, she believes, detracts from the main issue of cardiac arrest and the importance of taking immediate action, since compressions should be performed the same way on every body type.

Correct CPR doesn't necessitate touching a woman's breast, according to Andersen, because compressions should be on the sternum, which is in the middle of the chest. She has started placing a sticker on the sternum to guide people when she brings Womanikins to community events. She also notes that as of 2015 AHA guidelines don't require or even recommend rescue breathing (mouth-to-mouth), except for in certain cases like drowning or overdose.

Henshaw says feedback about the Womanikin has been "overwhelmingly positive," including from some students who have been doing CPR training for decades and had never thought about gender disparities.

Some male students initially felt awkward, Henshaw says, but that hesitation dissipated after a few cycles of practice and her urging them to see the dummy as an important woman in their life who "didn't get CPR because somebody was embarrassed."

Learning to see 'the person not the parts'
While the Womanikin isn't widely available yet, some, like Tammy Turner, have developed their own creative tools to make CPR instruction more inclusive.

Turner, training center coordinator for EdCor, a medical training facility in Lakewood, Colorado, recently started putting shirts and bras on mannikins in her classes to get students comfortable doing compressions on all sorts of chests.

Turner was diagnosed with breast cancer about a year and a half ago, and has since undergone a bilateral mastectomy. After that, it dawned on her that training classes only use male manikins, and that could be an issue.

"I was like, if someone should start CPR on me, that's not something they're going to be used to seeing," Turner says. "How do we help women survive in pre-hospital type conditions in this circumstance?"

The first step was to get trainees comfortable removing shirts and bras from mannikins. That's because she's teaching them both CPR and the use of AEDs, which can be crucial to survival and are recommended to use whenever available — and AEDs should be used on bare chests.

Now Turner is trying to figure out what to put inside of the bras. Ideally, she would like to see breasts with a variety of nipple types, no nipples, and body jewelry. So far, she has been adding sticky boobs to flat-chested manikins.

Though Turner says it began as an experiment, the school is now starting to offer bra-clad manikins in every class. As she observed students selecting their training manikins at the beginning of each class, she noticed an interesting pattern: Students would often choose a dummy based on its attire because, for example, they assumed a pink jacket indicated a bra underneath. At first the manikins only wore pink or blue clothes, but Turner has since added greens and reds to mix things up.

"The big thing that we're really working towards is basically ... looking at the person and not the parts," she says.

Turner is looking for more ways to be inclusive in CPR training. She would like to have some manikins that appear masculine and have some sort of scar across their chests, to promote dialogue about performing CPR on transgender people.

Turner and Henshaw praised the Womanikin, though both say the breasts could be made more varied and realistic, probably with a different material. Collinson from Joan Creative says the agency is actively seeking feedback from the training schools who are using the prototype.

She says they hope to establish a retail partnership, either with a fashion line or a bigger retailer, to produce more attachments faster and more affordably.

The Womanikin alone will not close the CPR gender gap, Collinson says, but will elevate an important conversation. And that, say those working in the field, is a heartening first step.

Watch Live: Trump Coronavirus Press Conference Live Coverage: March 17 Primaries Coronavirus Briefings At The White House
By posting comments, you agree to our
AZPM encourages comments, but comments that contain profanity, unrelated information, threats, libel, defamatory statements, obscenities, pornography or that violate the law are not allowed. Comments that promote commercial products or services are not allowed. Comments in violation of this policy will be removed. Continued posting of comments that violate this policy will result in the commenter being banned from the site.