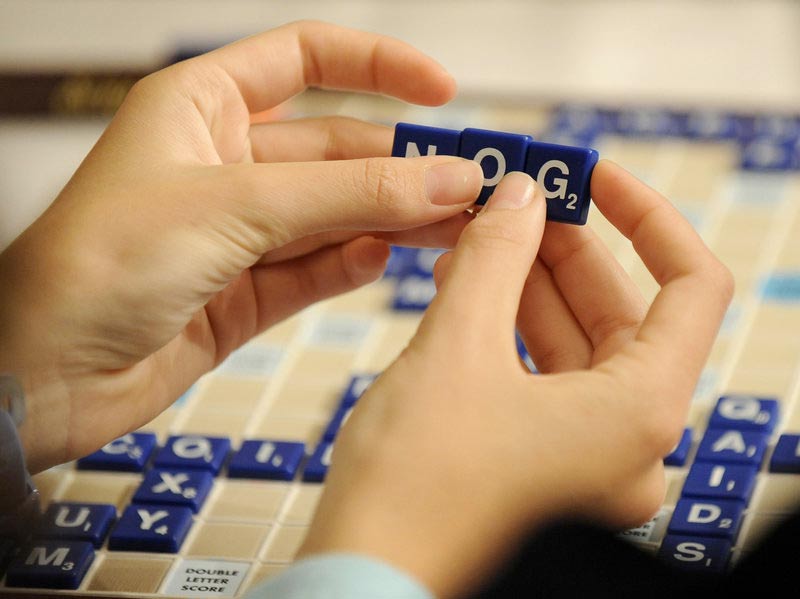 Merriam-Webster published the new edition of the Official Scrabble Players Dictionary, containing 300 new words, on Monday. Among those words are twerk — to dance by shaking the buttocks while squatting — and ew, used to express disgust.

The dictionary is a reference book for players of the popular crossword puzzle game produced by Hasbro. This is the sixth edition of the dictionary, which was first published in 1976 and is updated only once or twice a decade. The prior edition was published in 2014.

Besides twerk and ew, notable new words include bestie, zomboid, bitcoin, sheeple, beatdown, frowny and bizjet. Unfortunately, twerkery and twerkings are still not acceptable, according to Merriam-Webster.

Hasbro and Merriam-Webster issued a press release about the new edition.

"Scrabble has been a game night staple for 70 years, and we're excited to bring the game into its next decade with hundreds of current words like facepalm and emoji," said Hasbro's Jonathan Berkowitz in that release. "Additions like these will add a new layer of fun to game night, making game play even more entertaining and relevant."

Another Merriam-Webster dictionary defines a lexicographer as somebody who authors and edits dictionaries. As a lexicographer and editor at large at the company, Peter Sokolowski sees some of the Scrabble additions as representative of broader trends in modern language.

"I think ew is interesting because it expresses something new about what we're seeing in language, which is to say that we are now incorporating more of what you might call transcribed speech. Sounds like ew or mm-hmm, or other things like coulda or kinda. Traditionally, they were not in the dictionary but because so much of our communication is texting and social media that is written language, we are finding more transcribed speech and getting a new group of spellings for the dictionary," Sokolowski told the Associated Press.

"A thorough mastery of two-letter words is among the most important skills necessary in the creation of a successful and incomprehensible Scrabble board. The ability to add seemingly random letters to existing ones will allow a player to enjoy far greater latitude in placing their words on the board," according to Merriam-Webster.

On Hasbro's website, the company's answer to the commonly asked question, "How can I improve my Scrabble game skills?" is learn the two-letter words and the three-letter words that can stem from them.

"By learning and taking advantage of these few hundred words you will probably increase your scores at least 50 points per game," the FAQ page tells players.

Accordingly — while it might be more boring than twerk or ew — one of the more anticipated words to be added to the new edition is the word OK.

"OK is something Scrabble players have been waiting for, for a long time," Sokolowski told the AP.

With the letter "K" being worth 5 points and "O" adding an additional point, the two-letter word is easy to play and, if played strategically, can rack up the points.

Scrabble can get rather competitive, and the elite players have set up associations and annual tournaments across the world.

"The competitive players within the North American [Scrabble Players] Association treat it with a proprietary sense. It is their own," co-president of the association John Chew told NPR's Here and Now in 2014, when the dictionary was last updated.

The official dictionary now has over 100,000 words. However, the Merriam-Webster dictionary is not the only Scrabble dictionary used by competitive players.

Used mostly in North America, the Official Scrabble Players Dictionary is augmented for tournament play to include words "not sanitized to protect children and sensitive players," according to a 2015 New Yorker feature. With those inclusions, what is called the North American tournament word list expands to almost 190,000 usable words. Across the pond and beyond, English-speaking players and tournaments are more likely to use Collins Scrabble Words, published by Collins Dictionary. That list has over 276,000 words, including twerk, which was added in 2015, as reported by NPR's Bill Chappell.

However, there are some exceptions to what can be added to any Scrabble dictionary or word list, as outlined by the game's publisher, Hasbro.

"Before the game begins, all players should agree upon the dictionary that they will use, in case of a challenge. All words labeled as a part of speech (including those listed of foreign origin, and as archaic, obsolete, colloquial, slang, etc.) are permitted with the exception of the following: words always capitalized, abbreviations, prefixes and suffixes standing alone, words requiring a hyphen or an apostrophe," states the company's rulebook.

"No, LOL is not a word, OMG is not a word," Crew said in his 2014 interview, and, based on Hasbro's current rules, they will likely never appear on any official Scrabble list.

So, if you want to avoid some PO'd friends on your Scrabble app and a flipped game board IRL, abbreviations like these should probably be avoided, TBH.

Polar Express: New Spacecraft Will Explore Elusive Parts Of The Sun Don't Be Like Jeff Bezos. Here's How To Keep Your Phone Safe From Hackers
By posting comments, you agree to our
AZPM encourages comments, but comments that contain profanity, unrelated information, threats, libel, defamatory statements, obscenities, pornography or that violate the law are not allowed. Comments that promote commercial products or services are not allowed. Comments in violation of this policy will be removed. Continued posting of comments that violate this policy will result in the commenter being banned from the site.