As a federal report faults ICE's complaint-handling process in detention, a letter from Eloy describes a facility on the brink. by Alisa Reznick Tweet 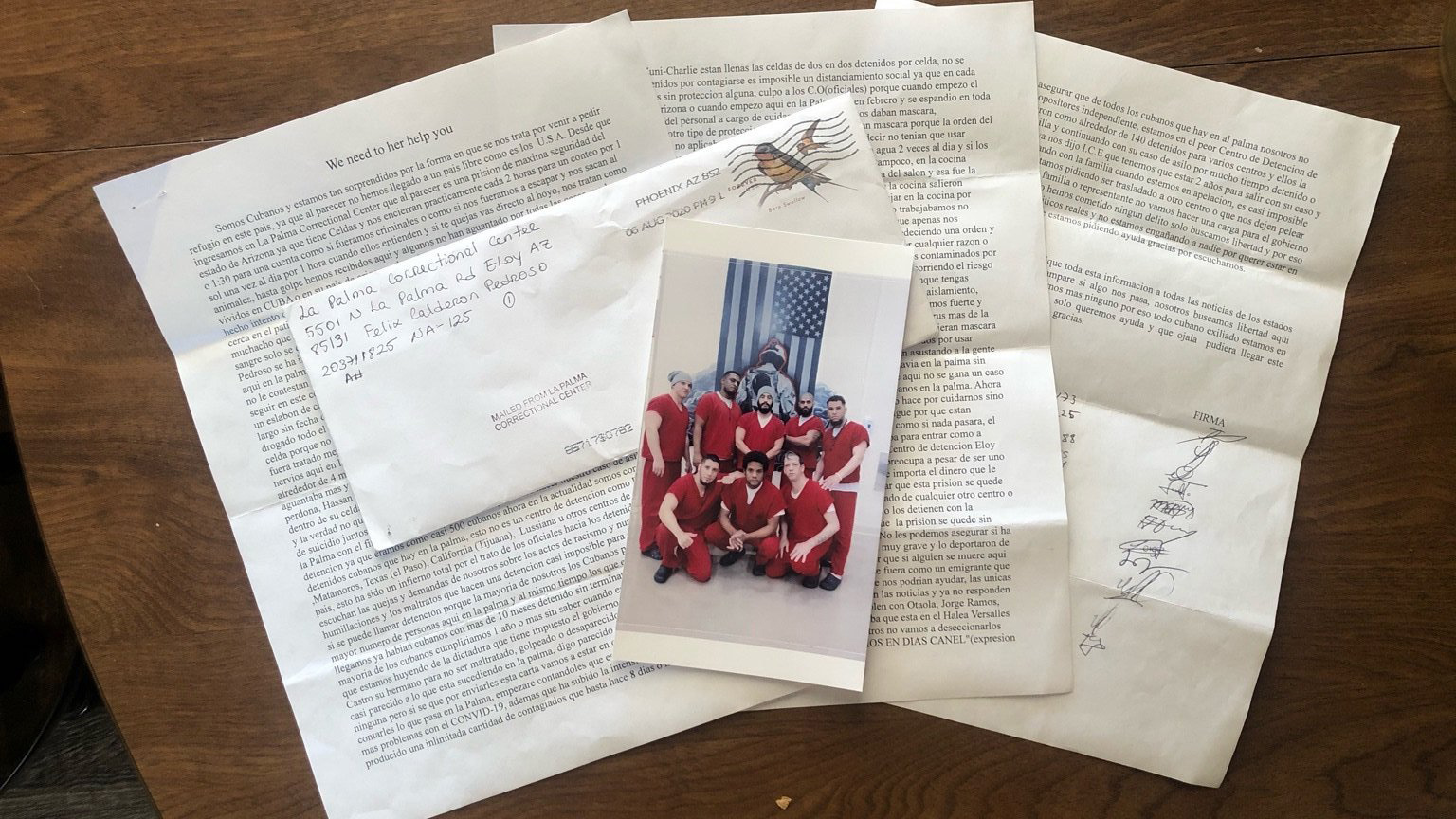 An image of the group of Cuban asylum seekers and the letter they sent from the La Palma Correctional Center in Eloy.
No More Deaths

A group of asylum seekers held in Immigration and Customs Enforcement custody at a detention center in Eloy say conditions inside the facility have led to hunger strikes and a string of self-harm incidents that have worsened with the COVID-19 pandemic.

In an August letter shared with media by the advocacy group No More Deaths, 11 asylum seekers from Cuba said they are members of political opposition groups back home and came to the U.S. to seek protection. But awaiting immigration hearings at the La Palma Correctional Center, they said they’ve seen or experienced suicide attempts, self-harm incidents and mental health crises.

"It seems that the country we have arrived to is not the free country the United States is supposed to be," the letter, originally written in Spanish, read. "La Palma Correctional Center has seemed more like a maximum security prison since we arrived."

The letter describes incidents in which detainees have swallowed a razor blade, tried to hang themselves and had mental health breakdowns. The signers said they are some of about 300 Cubans held at La Palma, most of whom have been detained for more than a year.

They said about 140 detainees have gone on hunger strikes to protest conditions inside. Others have asked to be deported to Cuba and other home countries instead of waiting out trial dates long delayed by the COVID-19 pandemic and changing asylum policies.

In one incident, the letter describes a detainee whose attempted hanging was intercepted by staff.

"Instead of helping him, the guards sprayed him with a hose," the letter read. "There are others whose names I don’t know, and in truth, I can’t speak of the suicides anymore, it is too sad."

In the letter, detainees said conditions at the facility worsened with the onset of the COVID-19 pandemic. ICE reported the first case of the virus at La Palma in April. The facility had at least 120 cases among detainees at the height of its outbreak, according to ICE data.

As the virus spread, the letter said detainees who refused to keep working in the kitchen were reprimanded with solitary confinement. They said these same places are used to quarantine COVID-19 patients.

"If a detainee was ordered to work and refused, he was punished for disobeying orders and sent to 'the hole' for 30-60 days," the letter read. "Anyone who is punished for any reason or cause is treated this way, for reporting injustices that are committed here."

Gustin also disputed those claims. He said detainees aren’t forced to work, and CoreCivic facilities don’t have “solitary confinement,” but rather “various security levels and safety needs for restrictive housing.” He said the facility follows federal recommendations for cleaning and disinfecting.

"Our facilities do not have any form of 'solitary confinement.' We do have separate housing units that we use to mitigate the spread of COVID-19 when someone is confirmed positive for the virus, but whenever someone recovers from the virus their living area is completely sanitized and cleaned before it would be used again," he said.

Jenna Johnson, an attorney who works with the legal aid group Keep Tucson Together, said her group has represented hundreds of people detained at La Palma and the Eloy Detention Center, another CoreCivic facility down the road. She said some of her clients come across isolation cells that were unsanitary.

"They’ve gone into cells that have what looks like spit up mucus on the floor, dirty sheets, toilets full of feces and urine, clothes from the person who was in it before, and they've been giving no cleaning supplies to clean those cells," she said.

Immigrant advocates, lawyers and detainees have long decried conditions inside ICE facilities in Arizona. Johnson said this letter is the latest in a long list.

"We’ve received probably a letter a week from 10 to 20, 30, 40, 50 people who are really trying to have what’s happening to them acknowledged and heard," she said.

La Palma has a capacity of over 3,000 beds, but both ICE and CoreCivic have said the facility is kept well under capacity to increase the ability to social distance. In the letter, detainees said they worry contagion will continue because new detainees are still arriving. They said some come from other detention facilities like Eloy, others are newly detained, and none of the new arrivals are being tested for COVID-19.

"COVID-19 continues because they continue to bring in more detainees from the outside, who have been living in the US," the letter said. "They mix them in with the rest of us as though nothing would go wrong."

"All detainee transfers and transfer determinations are based on a thorough and systematic review of the most current information available," Pitts O'Keefe said. "As such, ICE takes into account important factors prior to the transfer, including the detention center and the health, safety, and welfare of the detainee, when determining if a transfer is appropriate. All decisions on movement, further isolation and monitoring are done in accordance with CDC guidelines."

Asylum seekers in the letter said complaints about conditions in La Palma are not addressed by staff.

"This place has been like Hell due to the treatment of the detainees by the guards," the letter read. "ICE doesn’t listen to our demands or our complaints about the acts of racism, and never visits the center."

CoreCivic spokesperson Gustin responded that an ICE monitor is always on site at La Palma and detainees can lodge complaints through “in-facility reporting, a company-wide hotline” or directly to ICE.

Nationally, ICE has been faulted for failing to adequately address complaints from its facilities.

The report, based on 2019 data, says some form of inspection was carried out at all of ICE's 179 adult detention centers nationwide. But information from those inspections often failed to go anywhere. The report found in one instance field offices failed to address 99% of noncriminal complaints referred by an administration inquiry unit.

Johnson said many of the complaints in the letter mirror those she hears from clients.

"People within ICE and CoreCivic have told me these things are exaggerated or not true," she said. "But to think of speaking out, in a public way, against the person that controls every minute of your day, over something that is untrue, that's really difficult for me to imagine."

At least 460 people detained in ICE facilities in Arizona have tested positive for COVID-19 since the pandemic began. Advocates warn a lack of testing means that number could be higher.

In the letter, detainees said COVID-19 testing is still low across the facility, and those with symptoms are sometimes still not given a test. Johnson said some clients report being reprimanded for asking for masks, testing and additional soap.

"We have gotten reports that they've been sent to isolation pods for making those requests," she said.

In the letter, detainees say they're writing to journalists because "there is no more coverage of La Palma." They say they want to be transferred to a different detention center or released to wait out court dates with family in the U.S.

ICE has released hundreds of detainees nationwide in the wake of the pandemic. Johnson is working to get more of her clients released, but progress is slow.

"We've had very, very few people released on parole, which is ICE's discretionary release," she said. "Mostly we're having to fight tooth and nail to get a bond hearing set."

"I think they see people disappear and they don't know what happened to them," she said. "They don't know whether they're COVID positive and they're in isolation, or they passed away and no one is telling them."

Editors' note: This article was updated Aug. 22 to include information provided by CoreCivic after publication.

Opioid busts on the rise at Arizona ports of entry Justices dismiss Trump-era immigration case Biden nominates Phoenix election attorney to 9th Circuit
By posting comments, you agree to our
AZPM encourages comments, but comments that contain profanity, unrelated information, threats, libel, defamatory statements, obscenities, pornography or that violate the law are not allowed. Comments that promote commercial products or services are not allowed. Comments in violation of this policy will be removed. Continued posting of comments that violate this policy will result in the commenter being banned from the site.