A Defense Department program allows local law enforcement to get everything from office supplies to guns for free. by Christopher Conover Tweet 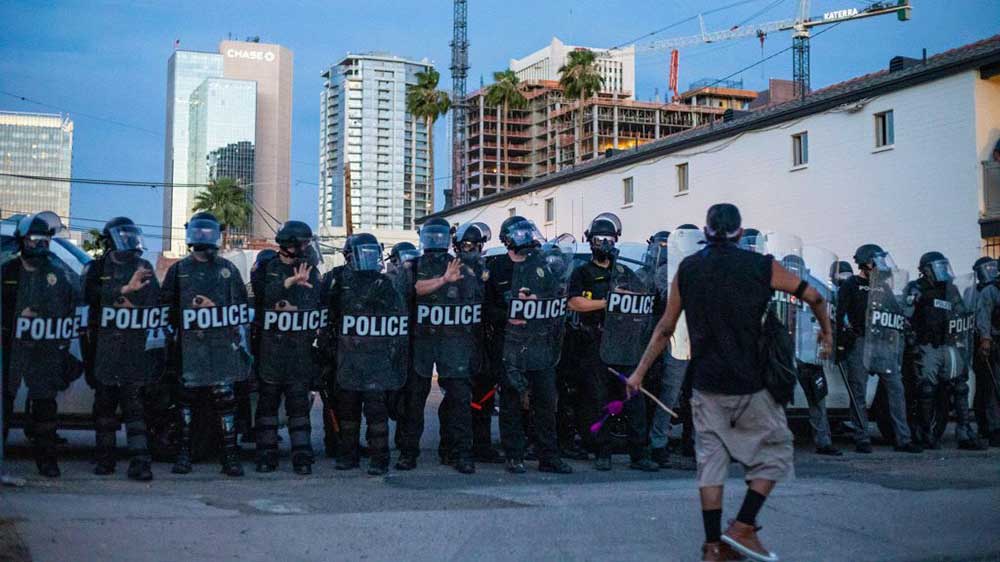 VIEW LARGER A protester approaches a line of police officers in downtown Phoenix on Sunday, May 31, before the imposition of a statewide curfew to rein in protests over police violence.
Blake Benard/Special to Cronkite News

Law enforcement agencies across Arizona have received more than $89 million worth of military surplus in the last 20 years. The inventory of goods ranges from weapons, to vehicles and aircraft, to dustpans and padlocks.

During the recent protests following the death of George Floyd, some said it was hard to tell local police officers from National Guard troops. Some of that is due to what is often referred to as the “militarization” of the police.

The trend to a more militaristic style began in the 1970s with the rise of the SWAT or Special Weapons and Tactics teams at many police departments.

“It’s credited to Daryl Gates’ Los Angeles Police Department adopting more military tactics in the wake of the 1972 Munich Olympics and the idea that police need to be prepared for large scale terrorist attacks ,” said Michael German, a fellow at the non-partisan Brennan Center for Justice.

During the Olympics in Germany in 1972, a group of Palestinian terrorists took 11 members of the Israeli national team hostage. All of the hostages were killed.

“We use that for transporting inmates from our county jail to our state prisons throughout the state and when you start taking 20 at a time, you can see what a benefit that is instead of taking two or three vans,” explained Dannels.

Pima County law enforcement received about $1.9 million in military surplus between 2000 and 2020. Agencies in the Tucson metro area received 592 magazines for guns and the Pima County Sheriff’s Department was able to get two robots used by bomb squads worth more than $150,000.

“Those become toys rather than items that are really needed and like any kid at Christmas one extra toy is going to be better than one less toy,” said German. “So, when the police are acquiring this type of equipment, when they don’t have a specific need for it that justifies the expenditure of public money you have to ask yourself whether it is really appropriate for them to have that.”

Sheriff Dannels says he has heard all of those arguments before and he doesn’t buy them. He also doesn’t like the phrase “militarization of police.”

Four times a year, the Defense Department releases its list of surplus given to law enforcement agencies across the country.

Calls for police accountability continue as details of past cases emerge TPD releases reports for four in-custody deaths TPD officers face state review
By posting comments, you agree to our
AZPM encourages comments, but comments that contain profanity, unrelated information, threats, libel, defamatory statements, obscenities, pornography or that violate the law are not allowed. Comments that promote commercial products or services are not allowed. Comments in violation of this policy will be removed. Continued posting of comments that violate this policy will result in the commenter being banned from the site.