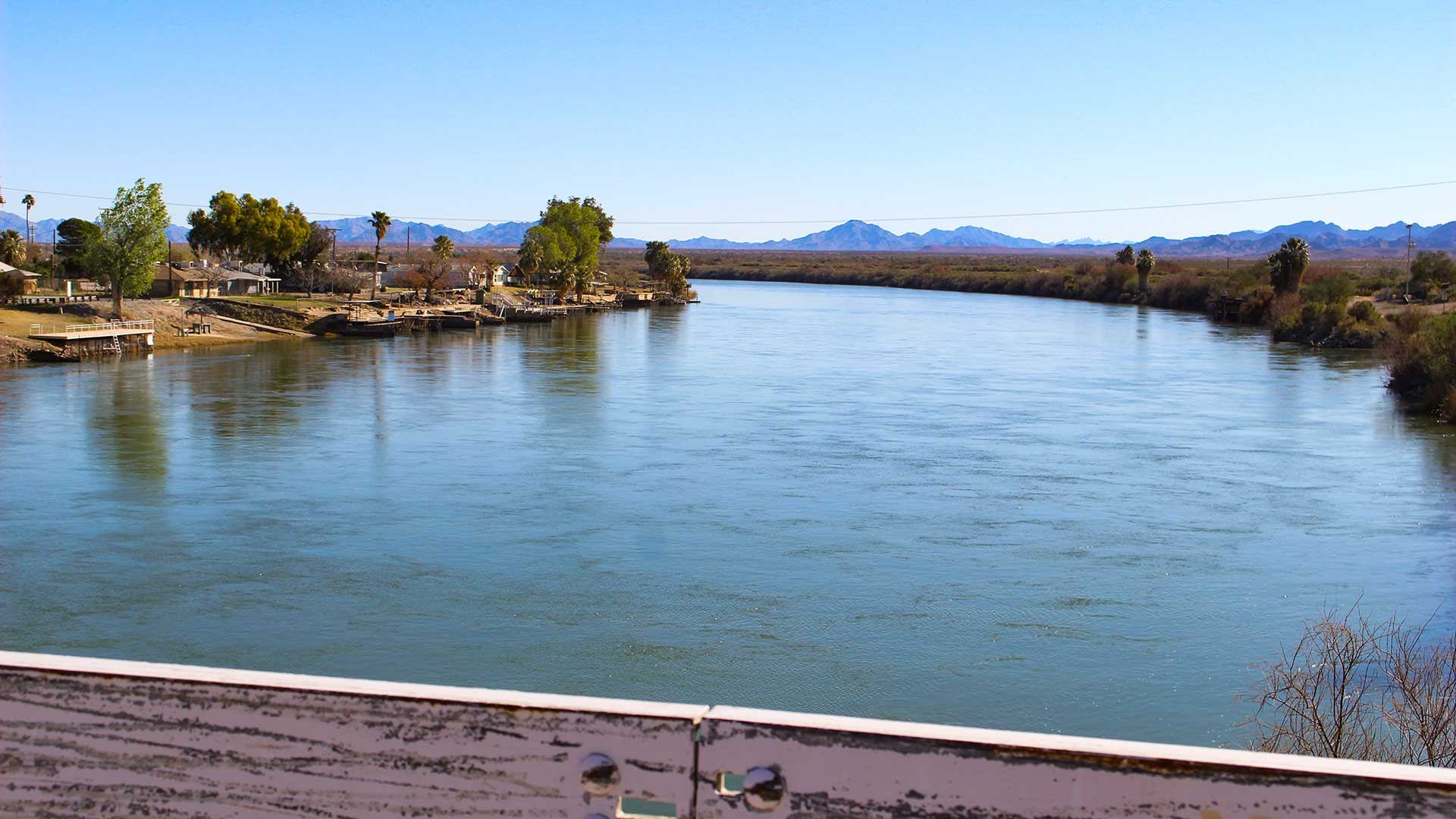 Other regions of the state say: Don’t come here.

“They want to come and take from the rural counties, which is completely wrong, in my opinion,” said Holly Irwin, a county supervisor in La Paz County, in far-west Arizona. Her district is where the Colorado River runs along lush irrigated farmland and small towns.

Irwin is pushing back against a plan to transfer water rights from some privately-owned farms there to the Town of Queen Creek, likely never to return.

To her, it’s a slippery slope.

“There’s already people in line waiting to see if this is going to go through — entities,” she said. “And the minute the first one goes through, it’s like opening up flood gates and you’re never going to be able to close them.” 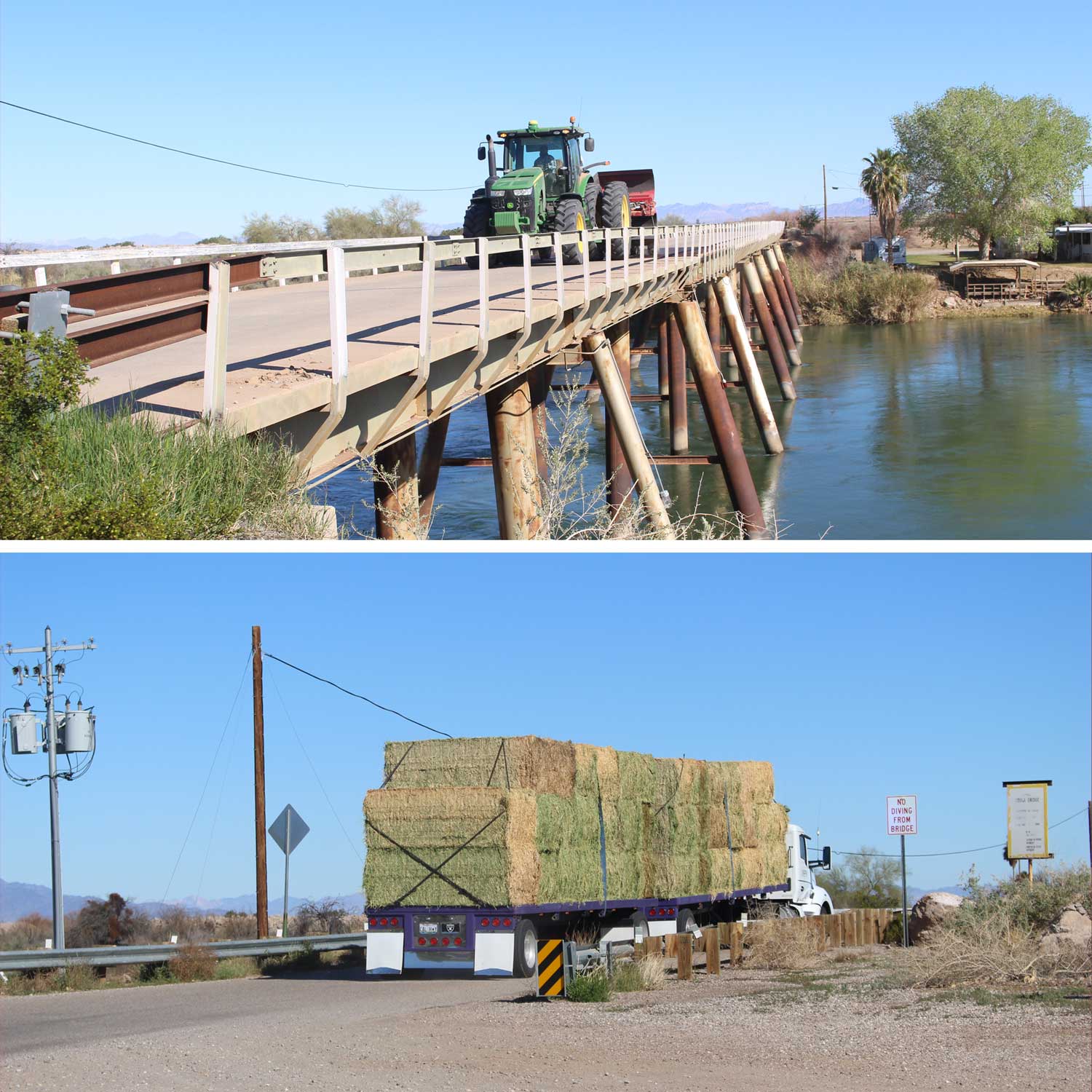 The buyer here, the Town of Queen Creek, says this purchase will help it grow sustainably.

“What we’re trying to do is get that groundwater pumping down to as close to zero as possible,” said Paul Gardner, Queen Creek’s utilities director. “We’re not gonna quite get there, but we want to get as self-sufficient as possible on renewable supplies.”

Like other cities and towns on the outskirts of the Phoenix metro, Queen Creek’s population has increased significantly, over 60% since 2010 (although some of that was through annexing existing homes).

The town is paying $10,000 an acre-foot for water rights tied to the farmland. The quantity is 2,083.1 acre-feet of Colorado River water, making the total price about $20.8 million. (An acre-foot is roughly what a family of four uses in a year.)

The price is not exorbitant, experts say, considering that the sum pays for a right to water in perpetuity. 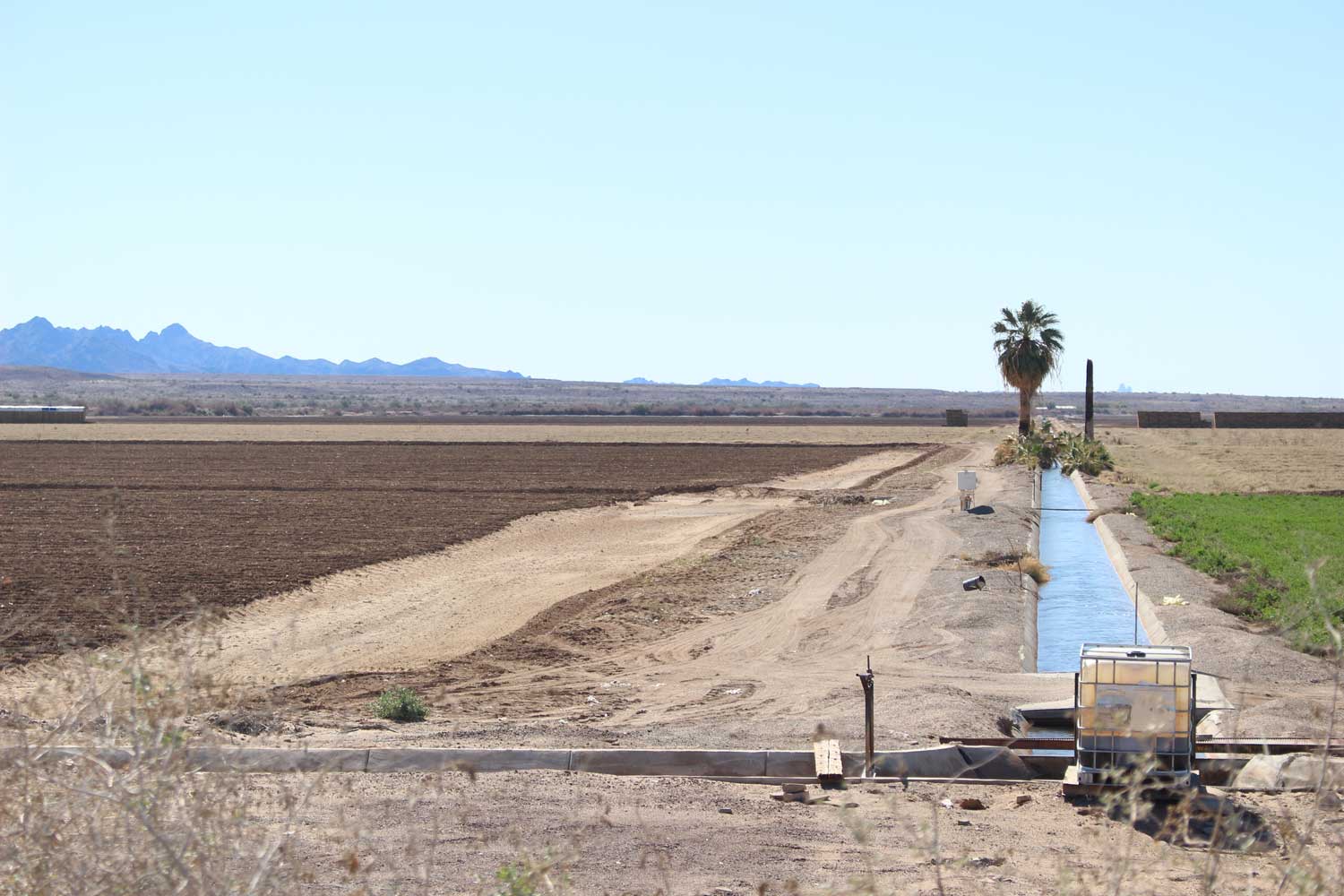 VIEW LARGER Some of the farmland in the Cibola Valley is owned by the water investment firm Greenstone. They are looking to sell a large chunk of their water rights to the town of Queen Creek, a Phoenix exurb.
Bret Jaspers for KJZZ

Investors aim to cash in

There’s a major player at the heart of this deal. The Phoenix-based water investment company Greenstone owns the farmland, through its subsidiary GSC Farm. If successful, they’ll receive about $20.8 million for the water, about double what they spent on the land.

Greenstone is one of a handful of private investing firms looking at water scarcity in the West as a money making opportunity. Principals at Greenstone declined an interview for this story.

The firm has hired well-known Phoenix real estate attorney Grady Gammage. After a hearing on the deal in November, he rejected the notion that transferring these specific water rights will hurt development in rural Arizona.

“The amount of water that is there is vast, frankly,” he said. “The existing river communities only use about 40% of their existing municipal supply.”

Gammage said this particular situation is unique, and won’t create the slippery slope rural boosters are so worried about.

“To the knowledge of GSC Farm, LLC and the Town of Queen Creek, there are no other transfers of water to Central Arizona currently contemplated, nor do the commenters identify any such possible transfers,” wrote attorneys for GSC Farm, LLC in its response to public comments.

This land, however, is likely not the only property Greenstone owns in Western Arizona. According to county records, LLCs with the same Phoenix address as Greenstone own over a thousand acres in Yuma County, just south of La Paz.

Many Yuma County residents are, like Irwin, staunchly against the transfer. 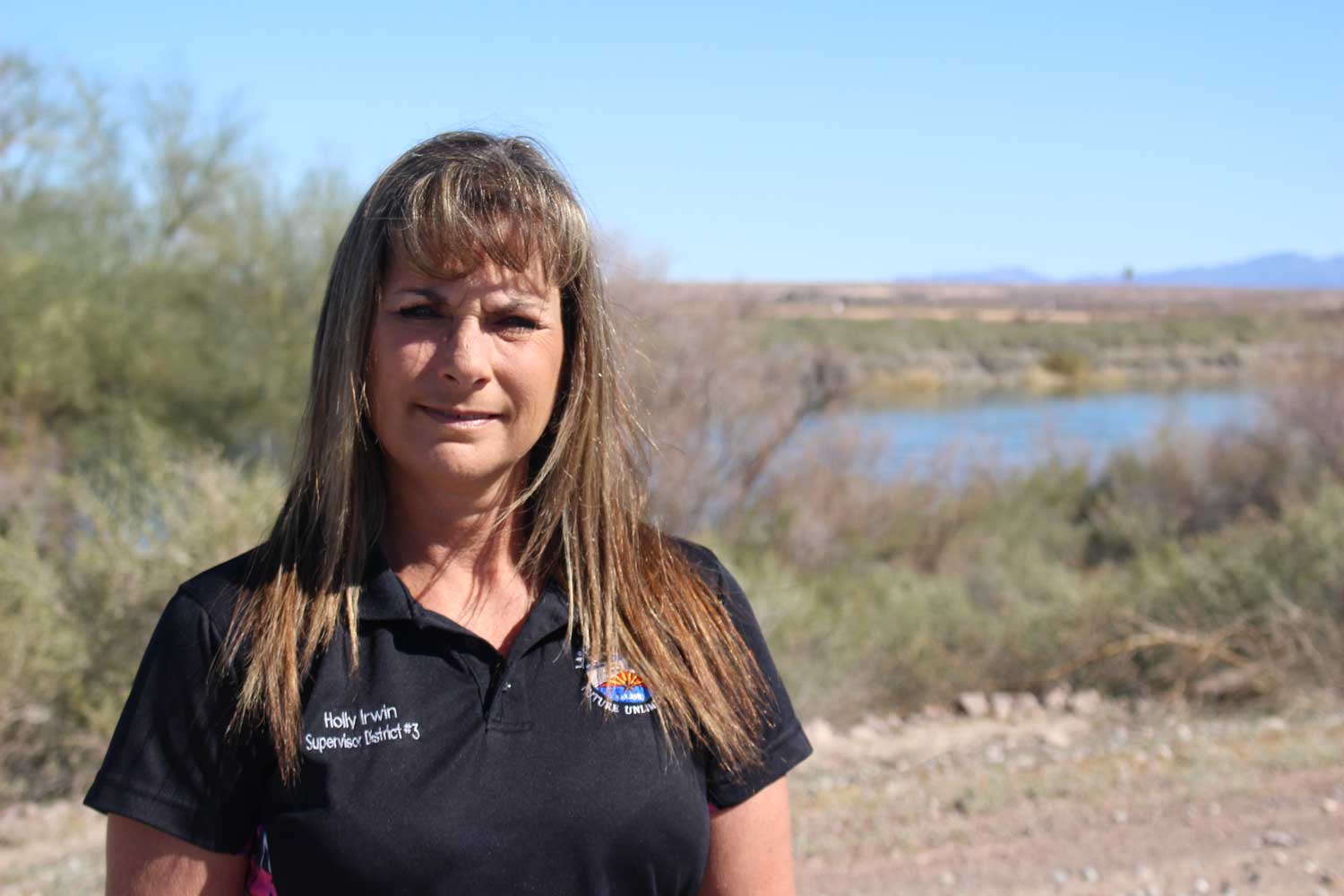 VIEW LARGER La Paz county Supervisor Holly Irwin is against the transfer of water from the county's agriculture to Queen Creek.
Bret Jaspers for KJZZ

Water transfers like this, with some important differences, have been tried before. The main reason is that water for new development in Central Arizona is increasingly pricey and scarce, especially in communities on the outer edges of Phoenix. And yet, people are moving there in high numbers.

“The development of housing in those areas tends to be less expensive than in the older cities,” said Sarah Porter of Arizona State University. “And those developers are required to find a water supply before they can develop.”

New development in Central Arizona must show a hundred years of supply, and have a plan to replenish any groundwater it pumps. One way to do that is enroll houses in an agency called the Central Arizona Groundwater Replenishment District (CAGRD). That agency, tasked with replenishing pumped groundwater, has consistently raised its prices. It’s also on the hunt for more water.

For a town such as Queen Creek, securing its own renewable supply would keep it less reliant on the CAGRD.

“Queen Creek has a budget right now. And they’re not working within their budget. They’re saying ‘I need more, I need more, and this is how I’m gonna get more,’” she said. “And they’re using a heavy hand trying to do it.”

Robert Glennon at the University of Arizona has written extensively about water markets and thinks transfers like this can work, if designed in a particular way. He thinks a water buyer could put money towards something the rural community wants, like infrastructure to help farmers there use water more efficiently.

This proposal doesn’t have that extra local investment, and GSC Farm’s response to public comments did not include any such plan. It’s also unclear it would make a difference to people in Western Arizona anyway. Cobb said she would fight the deal all the way to the federal Department of Interior, which has to approve the transfer of the water right.

Most observers believe Interior will put a lot of weight on whether or not the Arizona Department of Water Resources recommends the deal. After a request from entities in Western Arizona, the department has a September deadline for issuing its recommendation.

An emailed statement from the department said “the Director intends to utilize all the allotted time to review and consider all the collected data and public comments regarding the proposed transfer before issuing a recommendation.”

It’s a pivotal moment for those who have water, those who need water, and those in the middle who want their investment in water to ripen.

This story is part of a series on water investment in the West, produced by KUNC in Colorado, Aspen Journalism, KJZZ in Arizona and the Nevada Independent.

For this summer's water forecast, climate experts are looking back to winter Tucson willing to give up some Colorado River water Making the most of water in Tucson
By posting comments, you agree to our
AZPM encourages comments, but comments that contain profanity, unrelated information, threats, libel, defamatory statements, obscenities, pornography or that violate the law are not allowed. Comments that promote commercial products or services are not allowed. Comments in violation of this policy will be removed. Continued posting of comments that violate this policy will result in the commenter being banned from the site.