The board voted to make additional payments to reduce debt. by Summer Hom, AZPM Tweet 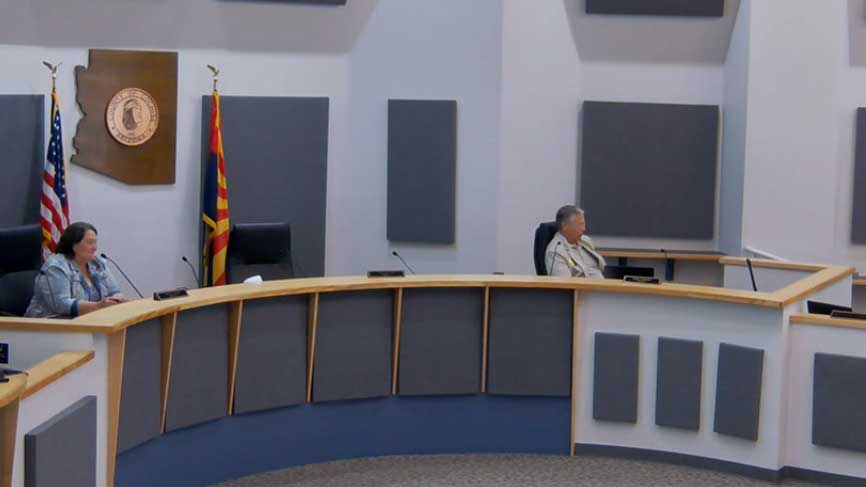 Cochise County Board of Supervisors -- who appeared via Microsoft Teams -- voted to approve a $2.5 million payment to the Public Safety Personnel Retirement System (PSPRS) from the general fund contingency. June 21, 2022
Summer Hom/AZPM

Cochise County Board of Supervisors voted on Tuesday to approve a $2.5 million payment to the Public Safety Personnel Retirement System (PSPRS) from the general fund contingency.

In October 2021, the Board of Supervisors adopted a four-year, $10 million dollar plan to pay down the PSPRS liabilities – which is about 35 million dollars according to Cochise County Budget director Daniel Duchon. Duchon said that the plan was to make $2.5 million payments annually, for four years – the first payment being made in the current fiscal year.

“During budget preparation for next year – the budget starting July 1 which is fiscal year 23 – we learned that the expenditure limit decreased by approximately $750,000,” said Cochise County Budget director Daniel Duchon during Tuesday’s meeting. “So, preparing that budget we thought it would be prudent to move the next year’s PSPRS payment and make it this year to avoid spending too much on the expenditure limit. And to be clear, we’re talking about the extra payments from this $10 million-dollar plan, we’re still making our annual minimum payment – which is roughly $2.8 million.”

Dunchon said that the FY23 tentative budget will be presented with approximately $15 million in contingency.

“This current year, our spending is far enough under the expenditure limit where we have made the $2.5 million-dollar payment, we can make another $2.5 million-dollar payment – which we would’ve made next year,” Duchon continued. “This would simply allow us some breathing room next year with the expenditure limit because of the decrease in the limit and the increase in expenses that we previously discussed last week when we adopted the tentative budget.”

Duchon said that this would remove the need for the county to make extra payments in the next fiscal year to the program but noted that the annual minimum payments of approximately $2.8 million dollars would still be made.

The board also voted to approve the Arizona Criminal Justice Commission (ACJC) Drug, Gang & Violent Crime Control Grant, with the amount totaling $148,186.18. The grant will be effective July 1, 2022 through June 30, 2023.

Chief Civil Deputy County Attorney Christine Roberts said that the Drug, Gang and Violent Crime Control Program Grant is a recurring grant that funds one full time Attorney III and 60% of an Attorney II, who prosecute drug and violent crimes. Fiscal Impact & Funding Sources: The amount awarded this year is $148,186.18 with a match of $37,046.55. The match will be paid out of the General Fund.

Moving forward after the board’s vote of approval on Tuesday, the department will forward the paperwork to the Arizona Criminal Justice Commission for their final approval, signature and funding.

The financial impact of the grant is notable. According to the meeting agenda, if the board had voted not to approve renewal of the grant, the County would lose two experienced prosecutors and the County Attorney's Office would have to reduce the number of drug-crime prosecutions due to lack of manpower.

“If the County were to pay for these personnel out of the general fund, taxpayers would assume the added expenses,” according to the agenda item description.

The board also approved the renewal of the intergovernmental agreement between Cochise County and Naco School District, allowing the Cochise County Sheriff to assign a full-time deputy as the Naco School Resource Officer effective July 1, 2022 through June 30, 2023.

“Currently, the sheriff's office provides an employee to act as a school resource officer,” said Cochise County Sheriff Lieutenant Sean Gijanto. “School district has obtained funds to reimburse us for that position. The amount of funding they have is $75,100. The position costs the county $83,910. So, the county gets left paying about $9,000 of their base salary.”

“It’s a small price to pay for providing that service to the school district,” Gijanto continued. “I wish we had the funds and resources to do it for all the county schools. But right now, we only do the Naco school.”

Making college credits easier to access in Cochise County Residents in Cochise County organize vote to establish water regulation Cochise supervisors pick Benson city councilor for legislative seat
By posting comments, you agree to our
AZPM encourages comments, but comments that contain profanity, unrelated information, threats, libel, defamatory statements, obscenities, pornography or that violate the law are not allowed. Comments that promote commercial products or services are not allowed. Comments in violation of this policy will be removed. Continued posting of comments that violate this policy will result in the commenter being banned from the site.