As the Colorado River shrinks, can new technology save water on farms? The answer is complicated

Agriculture uses about 80% of the water in the Colorado River basin. by Alex Hager, KUNC Tweet 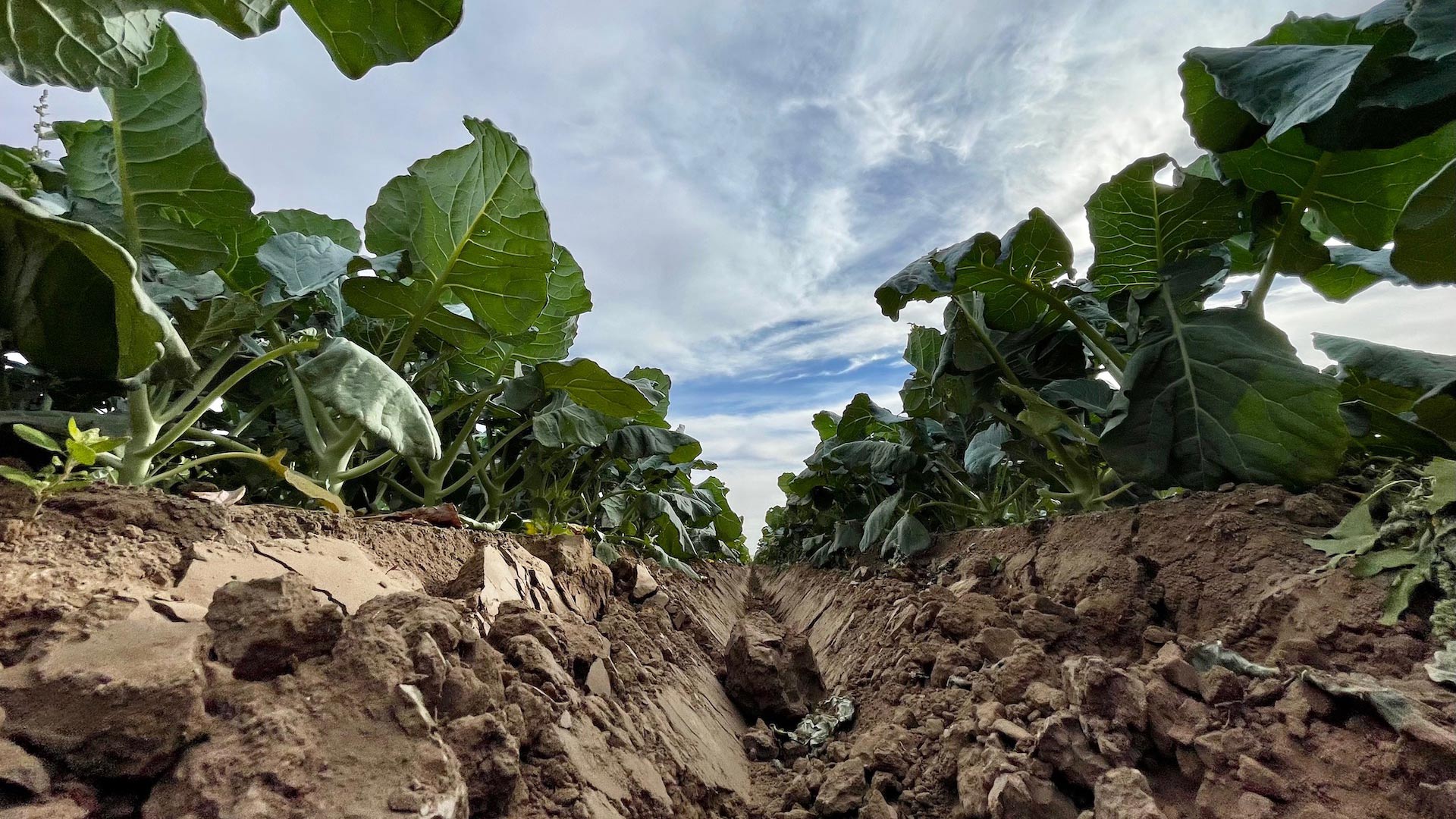 Precision-cut rows of broccoli grow on a laser-leveled field in Yuma, Arizona. Technological developments in agriculture are helping the industry use water more efficiently, but research shows that some methods are not helping save water on a basin-wide scale.
Alex Hager/KUNC

On a warm November day in Yuma, Arizona, the desert sun is beating down on a sea of low, green fields. Here, near the banks of the Colorado River, Matt McGuire is surveying an expanse of vegetables that sprawls into the desert landscape.

“You find it on the grocery shelf and it's a leafy green,” he said, “it probably came from here. Because about 80-85% of the vegetables in the wintertime come from this area.”

McGuire is the chief agricultural officer for JV Smith Companies, which grows produce in Arizona, California, Colorado and Mexico.

The rows that grow those vegetables are striking in their perfection. Lettuce springs up in a corduroy pattern of precision-cut stripes, and the dirt that holds their roots is chiseled into angles you could measure with a protractor. These laser-leveled fields help growers irrigate more efficiently, eliminating slopes and bumps to make sure that water doesn’t flow away from the roots.

Along with space-age developments that have helped growers reduce their reliance on human labor and save money without sacrificing output, these precision-designed fields are just one innovation that’s come along in the name of efficiency. 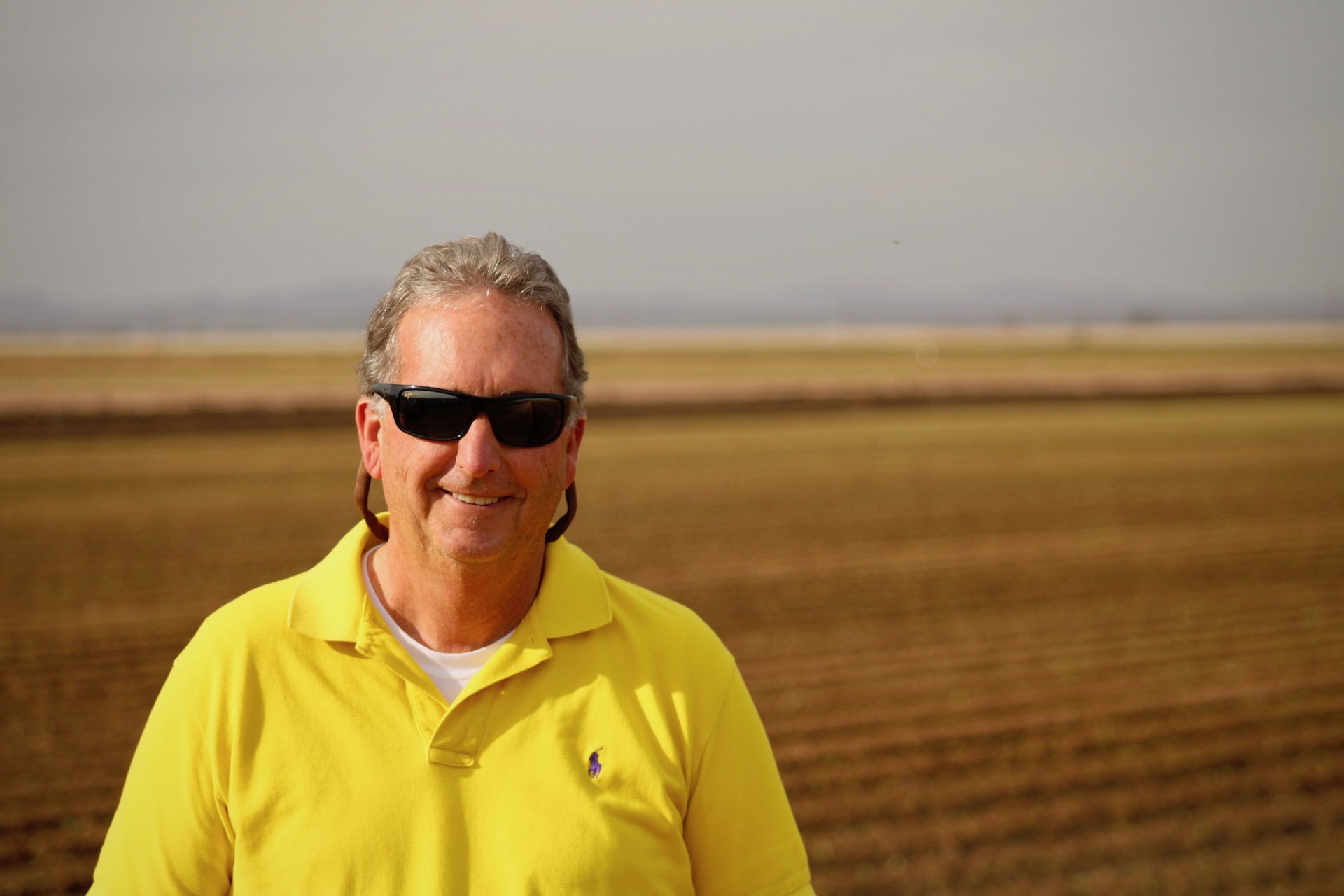 As the Colorado River shrinks, water cutbacks have already come for some farms. Matt McGuire, chief agricultural officer for JV Smith Companies, is adapting his fields to withstand a future with limited supply. "Hope and pray for more rain, more snow," McGuire said. "But we're trying to prepare for less water.”
Alex Hager/KUNC

“This system is showing us so far,” McGuire said. “When we're doing it, it uses half as much water as what we're using for sprinklers. It's just a constant progression to try to use less water.”

They’re trying to use less, partly because some day they might be given less. Agriculture uses about 80% of the water in the Colorado River basin. Thanks to decades of drought driven by climate change, the river’s shrinking supply has forced mandatory cutbacks for some users. The first to have their water supply reduced will be farms in central Arizona, just a few hours down the road from Yuma.

Climate scientists say more warm and dry weather is on the way, sending reservoir levels even lower and creating a need for expanded cutbacks. McGuire’s farm is near the bottom of the list to take reductions, but the technology used here is emblematic of adaptations farmers across the region are taking to withstand a future with limited supply.

Does saving water on a farm help the basin?

“I have farmers today that say, well, we're doing everything as good as can possibly be done,” said Paul Brierley, executive director of the University of Arizona’s Yuma Center for Desert Agriculture. “I always say, let's look in 50 years and look back and we'll laugh at these pictures just as much as we laugh at the pictures from 50 years ago.”

He says the list of innovations includes mobile apps, drones, satellites and the use of complex weather data – all to help measure and distribute water.

“This is something that a lot of money has gotten into, from a lot of sources, proactively,” Brierley said. “It's not because the government said you have less water this year. It's because the industry wanted to know, how can we best figure out what's the right amount of water?” 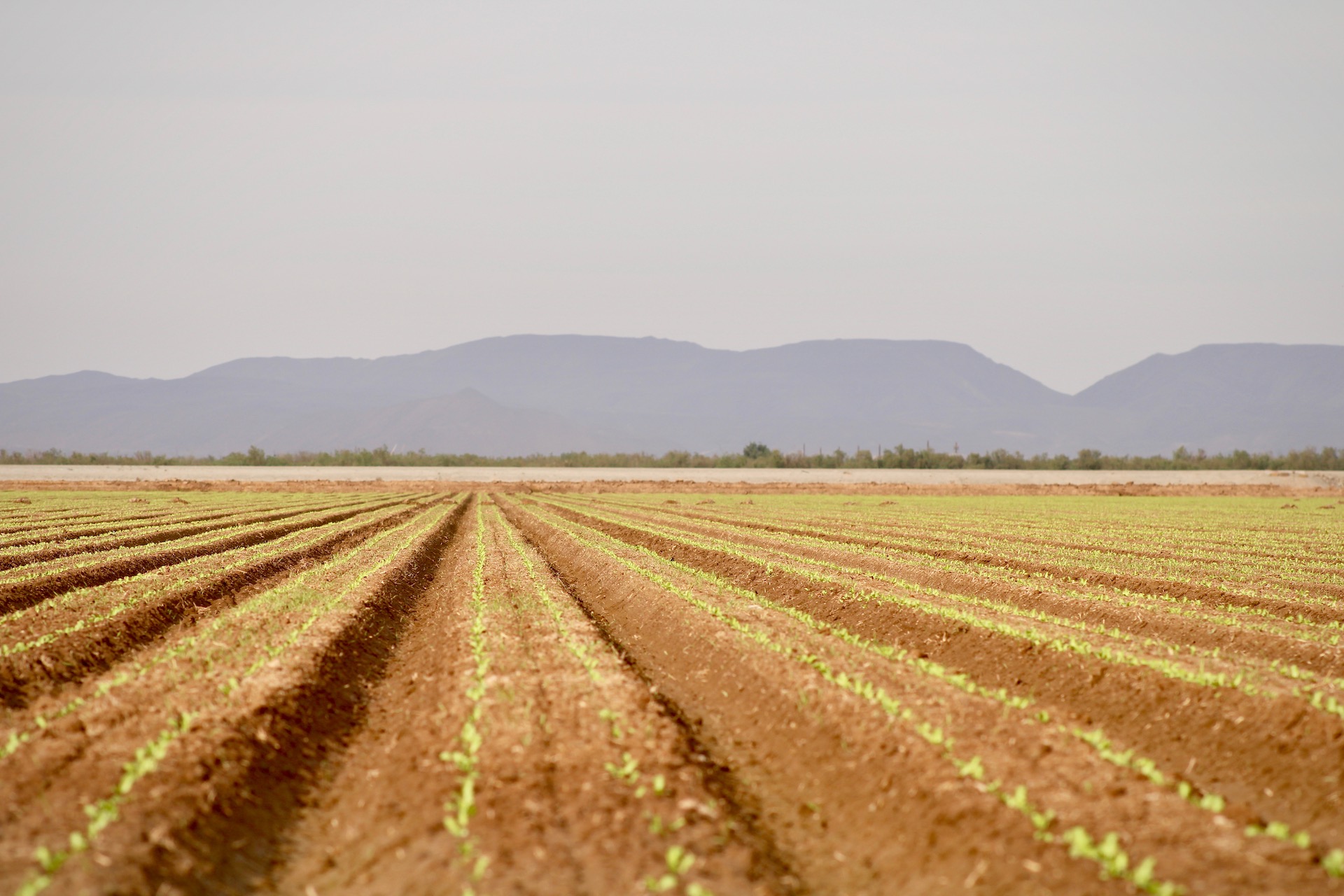 Romaine lettuce grows in neat rows on a farm in Yuma, Arizona. About 80% of the nation's wintertime vegetables come from the area.
Alex Hager/KUNC

New technology on farms throughout the Southwest often means less water is getting applied to crops, but there’s a catch — it doesn’t always mean the water is being saved.

A recent report from a multinational team of researchers suggests that many modern irrigation systems “aggravate water scarcity” in the long run. The idea that technologies such as drip irrigation save water persists, the paper explains, contrary to scientific evidence.

While drip irrigation differs from the methods used on the fields at JV Smith Companies’ farms in Yuma, it has been adopted at other farms in the region, and is seen by many as a water-saving technique.

Frank Ward, a co-author of the report and water policy expert at New Mexico State University’s department of agricultural economics, said “farmers are more interested in income from water, not in water conservation.”

“They're more interested in what part of their water applied gets to the root zone,” he said. “So conservation is less of an issue for the typical farmer than you might think.”

The report takes particular aim at myths surrounding the effectiveness of drip irrigation. Drip irrigation, where water is pushed out of small holes in a tube or pipe laid on the dirt, is a popular method of watering crops that reduces runoff and evaporation by allowing water to gradually trickle out onto the area near plants’ roots.

Ward explained that the technique leads to higher yields and more profits for growers, but reduces the amount of water returned to the underground aquifer for later use.

“At an individual farm scale,” he said, “it may look like it's conserving water because you're applying a lot less. But the research seems to be showing that shifts into drip irrigation are not conserving water, but they are raising farm income.” 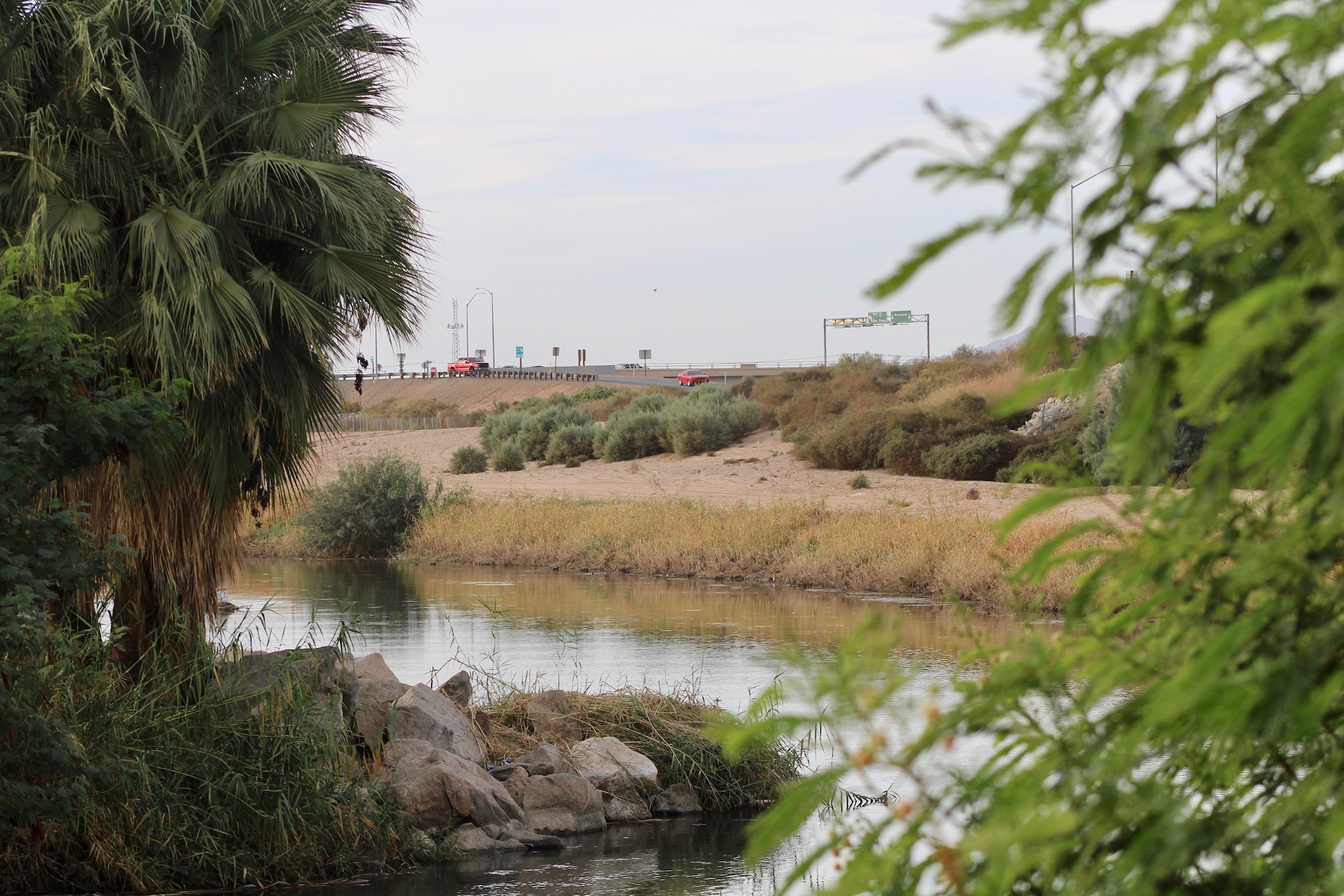 Agriculture uses about 80% of the Colorado River's water, seen here running through Yuma, Arizona. Thanks to decades of drought driven by climate change, the river’s shrinking supply has forced mandatory cutbacks for some users, beginning with farmers in Arizona.
Alex Hager/KUNC

While technology has helped farmers with their margins, research would suggest that existing innovations may not be a silver bullet for the broader basin’s water struggles. As the road ahead seems unlikely to deliver the rain and snow that would ease the strain of drought, farmers and the agriculture industry at large may have a shifting role in the region.

“You're going to see rising [water] prices, probably reduced use and more efforts to conserve water,” Ward said. “A farmer would rather find a way to conserve a little so he can keep this farm, not lose it, than be driven out of business and have to go into something else.

As supply goes down and prices go up, so might the appeal of selling water rather than using it.

“To be able to rent or sell some water in a low price year to a city and keep their water right might be a good way to keep income coming into the farm,” Ward said.

Could we — should we — build a desalination plant? Leading water experts explore the future of managing a shrinking water supply from the Colorado River Drought to continue, say weather experts
By posting comments, you agree to our
AZPM encourages comments, but comments that contain profanity, unrelated information, threats, libel, defamatory statements, obscenities, pornography or that violate the law are not allowed. Comments that promote commercial products or services are not allowed. Comments in violation of this policy will be removed. Continued posting of comments that violate this policy will result in the commenter being banned from the site.