× CORONAVIRUS: The latest coverage and resources regarding COVID-19 from the Arizona Public Media newsroom.
August 21, 2020

Getting out the vote ahead of the November election

Arizona is a battleground state this year, and multiple groups are working to register as many voters as possible. by Christopher Conover TWEET SHARE 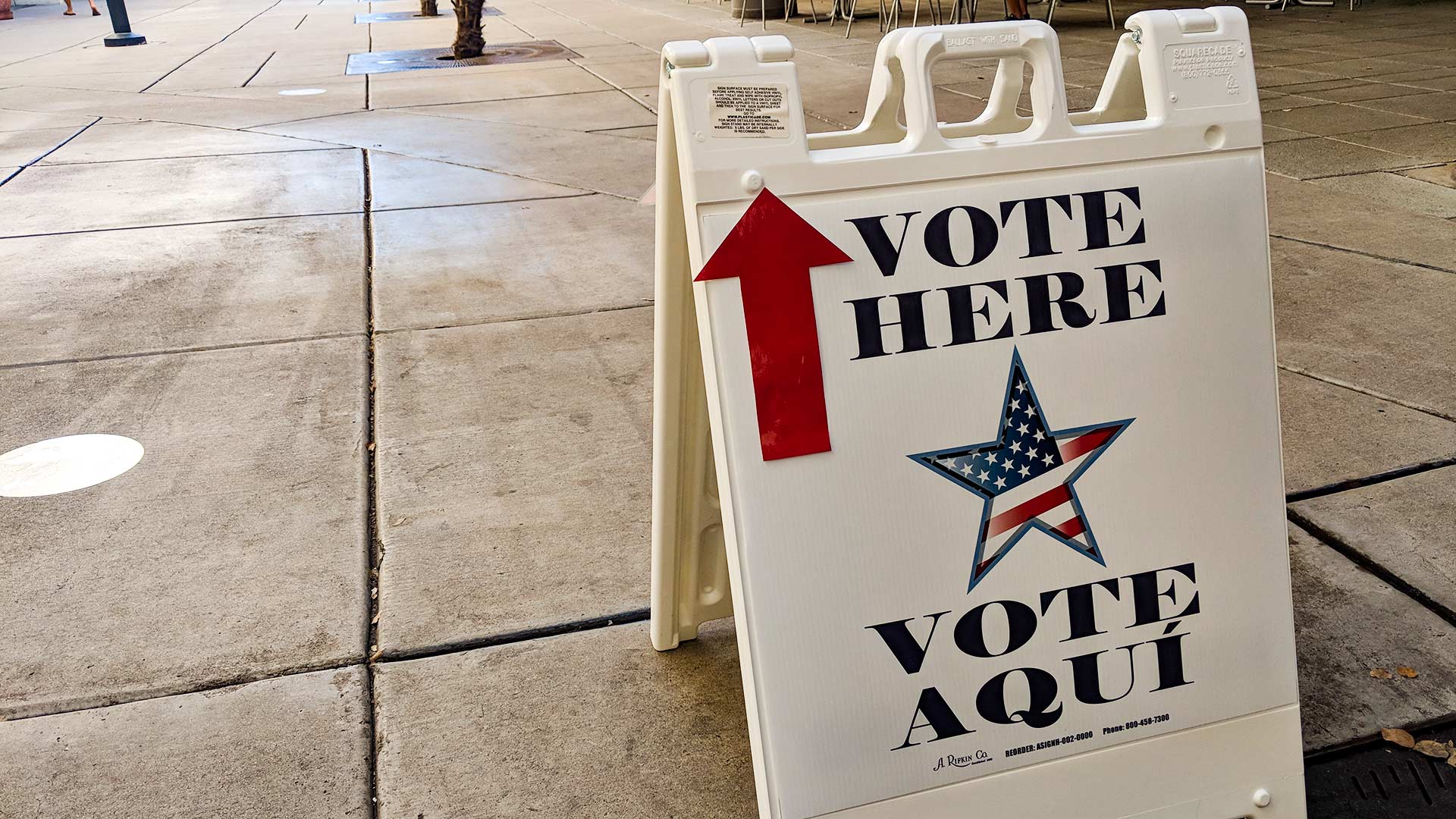 A voting location sign at the University of Arizona, 2018.
AZPM

Getting out the vote

For campaign observers and political operatives, Election Day is all about getting out the vote. Some say those efforts could turn Arizona purple or even blue this year.

An AZPM analysis of Arizona voter registration data for general elections between 1988 and 2018 revealed that Maricopa County has kept the state in Republican hands, due to the Republican leanings among the most populous county in the state.

In recent years, rural Arizona has also turned reliably red, but it was not always that way. The data also show a surge in no party or independent voters in the early 2000s. University of Arizona political scientist Barbara Norrander said that happened because Arizona switched from closed primaries, which require people to be registered party members to vote, to semi-closed primaries, which allow for independents to participate.

Even though independents have grown through the 2000s, they have never overtaken Republicans as the dominant party except for one year, in 2014. That was the year Republican Doug Ducey was first elected governor. But Norrander said independent voters still tend to follow a voting pattern that is consistent with a single party.

When people discuss the possibility of Arizona becoming a blue or purple state they often point to the last election in 2018, when voters reelected Ducey but also sent Democrat Kyrsten Sinema to the U.S. Senate.

“If you get more election outcomes where you have a split, where you have Democrats winning some offices and Republicans winning other offices, particularly if they are statewide offices, that might indicate that the state is more of a purple state,” Norrander said.

She said the makeup of the state Legislature can be another area to watch for signs of a political shift.

The discussion of a purple or blue shift in Arizona often includes the potential untapped voting power of Arizona's Latino population.

Many different local and national groups have worked for years to increase voter registration and turnout among the Latino community. Cesar Fierros Mendoza is a member of one such group, Living United for Change in Arizona, or LUCHA. He said his group is heavily focused on voter outreach in Arizona, especially ahead of this year's general election.

Due to the pandemic, traditional methods of voter outreach, like canvassing and voter registration tables, had to be modified. Fierros Mendoza said that LUCHA has turned to contactless canvassing, which maintains social distance, and drive-thru voter registration events.

“Now, as we are headed into the general election, we are focused on doing a lot more of that voter outreach, in terms of getting people motivated and ready to vote in November,” Fierros Mendoza said.

Arizona saw an upswing in Latino voter turnout during the 2018 election, according to Fierros Mendoza. He said that the policies of the Trump administration and the current pandemic have kept Latinos very aware about how politics affects them.

He also said that young Latinos have been very involved in political activism, which helps drive conversations in the home.

“That’s one way to drive turn out, by having that conversation about what is impacting their lives and how them showing up to the polls can make a difference in their lives,” Fierros Mendoza said.

Native Americans in Arizona did not receive the right to vote until 1948. And like other marginalized groups, Indigenous voters have experienced suppression and disenfranchisement in the subsequent decades.

Leaders of the Pascua Yaqui Tribe question whether the loss of an early voting site two years ago serves as another example of this.

"What is the message that that sends to us? Doesn't our vote matter? We're a sovereign nation,” Tribal Council member Herminia Frias said. She and other leaders were so frustrated by the change that they're still fighting for it to return.

Pima County Recorder F. Ann Rodriguez said some of her top reasons for closing the site were low voter turnout and a lack of security. She said the early voting site had been located at a radio station, with ballots stored in file cabinets.

Rodriguez's solution was to tell people to vote early at the Mission Library from now on. It's between the Pascua Yaqui in New Pascua and the Tohono O'odham in the San Xavier district, who live a little to the south.

Frias said moving the site meant those without cars now have to travel two hours by bus instead of walking to vote early.

An estimated 42,000 people are imprisoned in Arizona. Several groups are working to increase voter access in prisons and jails and restore voting rights to those who have lost them through felony convictions. Advocates say most people don't know they're eligible to vote again after serving their sentence, and the process to regain those rights is burdensome and underutilized.

Joe Watson is coordinator for the Unlock the Vote program with the Arizona Advocacy Network, which aims to ensure the rights of eligible voters detained in the state's county jails.

Watson said that people often do not realize that they are still eligible to vote from jail, so long as they have not been convicted of any crimes yet. In Arizona, people convicted of felonies have their right to vote taken away, along with other civil liberties.

“If you have one [felony] conviction, your rights are restored automatically once you have completed your sentence,” Watson said.

The process to restore a person’s voting rights after they have been convicted of multiple felonies differs from county to county, though Watson said it generally includes paperwork and appearing before a judge.

Watson cited information from the Campaign Legal Center and said it is estimated that over 200,000 Arizonans were disenfranchised due to sentencing and convictions. Communities of color, particularly Black communities, are disproportionately affected by this.

Pima County tops 600,000 registered voters News roundup: Reaching Latino and young voters; Poll: 38% of Arizonans wouldn't get COVID-19 vaccine News roundup: High heat brings health risks, Arizona prepares for the election
By posting comments, you agree to our
AZPM encourages comments, but comments that contain profanity, unrelated information, threats, libel, defamatory statements, obscenities, pornography or that violate the law are not allowed. Comments that promote commercial products or services are not allowed. Comments in violation of this policy will be removed. Continued posting of comments that violate this policy will result in the commenter being banned from the site.