After instating another stay-at-home order, the nation says it has recently seen weekly numbers start to decrease. by Emma Gibson Tweet 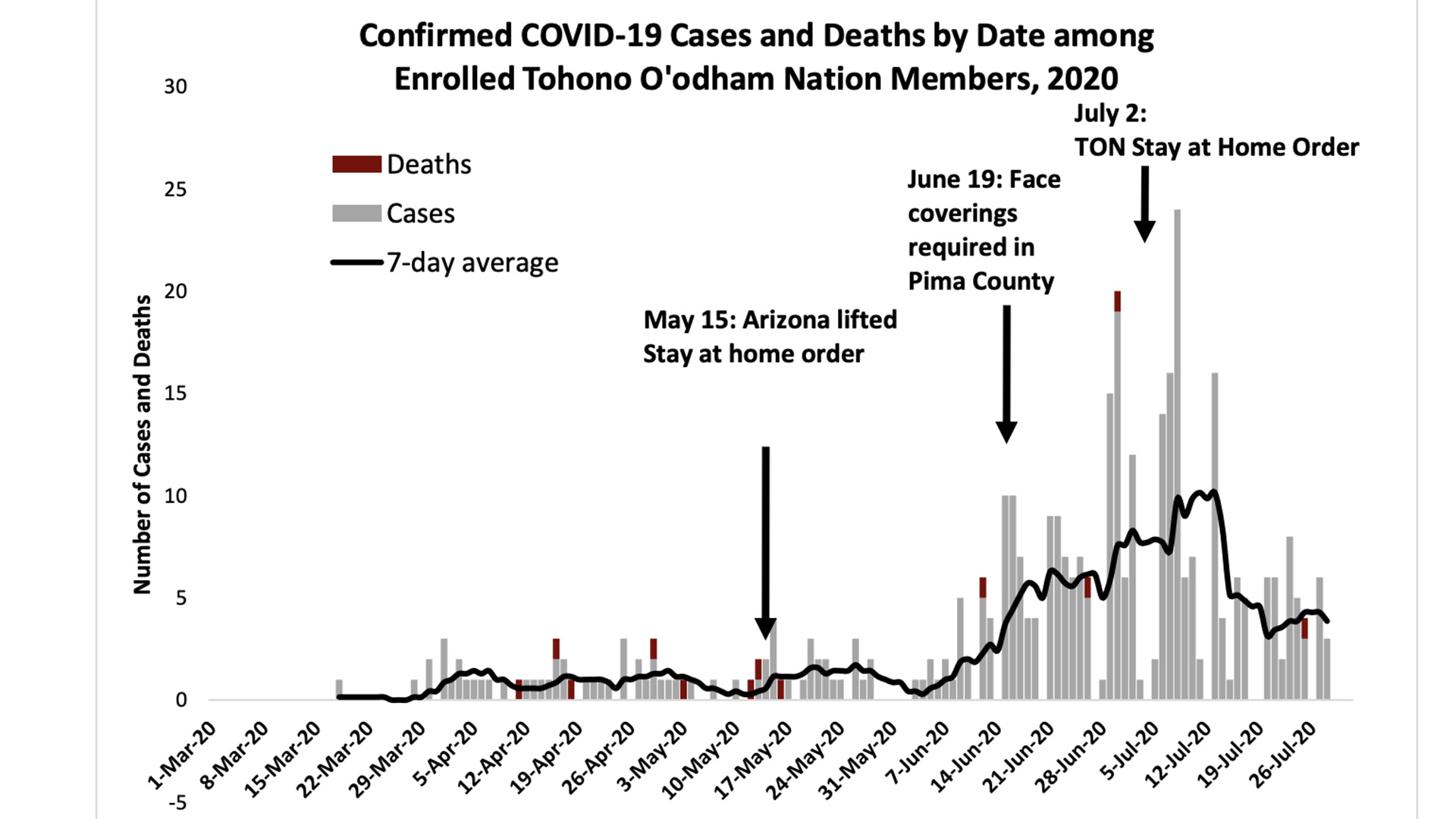 A screenshot of a chart depicting the number of COVID-19 cases and deaths among Tohono O'odham members featured in the July 29, 2020, report from tribal leadership.

The Tohono O'odham government reported Wednesday it has five times the number of tribal members testing positive for COVID-19 than it did in early June, but the number of weekly new cases is decreasing.

According to a report from the tribal government, 363 members have tested positive for the disease and 12 Tohono O'odham members had died as of Wednesday. Tribal leadership also reported 74 positive cases among people of other tribes or groups living in and out of the nation.

Tohono O'odham Nation Health Care has performed 2,975 tests on patients, employees, first responders and front-line workers, of which 302 have been positive. It is unclear how many tests were performed on Tohono O'odham members versus people of other tribes or groups. The report said the number of positive results is almost eight times what the number was in early June. That's mirrored by the increase in Tohono O'odham members living in the nation who have contracted the disease over the same period of time.

The tribal government reported that cases began to surge June 15, a month after Arizona's stay-at-home order expired and a couple days before Pima County required face coverings. The number of reported cases over the last two weeks has gone down and is now mirroring new cases numbers the government saw in late June. Tribal leadership said in the report it hopes the recent decrease in confirmed cases means the curve is flattening.

Approximately, 61% of tribal members with the disease are under 45 years old. The youngest member to contract the disease was 7 months old, and the oldest 87 years old.

Navajo organization received grant to increase COVID-19 vaccinations within the Navajo Nation University of Arizona research shows disparity in breast cancer treatments for Indigenous women Bisbee hospital in crisis care
By posting comments, you agree to our
AZPM encourages comments, but comments that contain profanity, unrelated information, threats, libel, defamatory statements, obscenities, pornography or that violate the law are not allowed. Comments that promote commercial products or services are not allowed. Comments in violation of this policy will be removed. Continued posting of comments that violate this policy will result in the commenter being banned from the site.