The Senate version of the bill does not include the ban on new uranium mines. by Emma Gibson TWEET SHARE 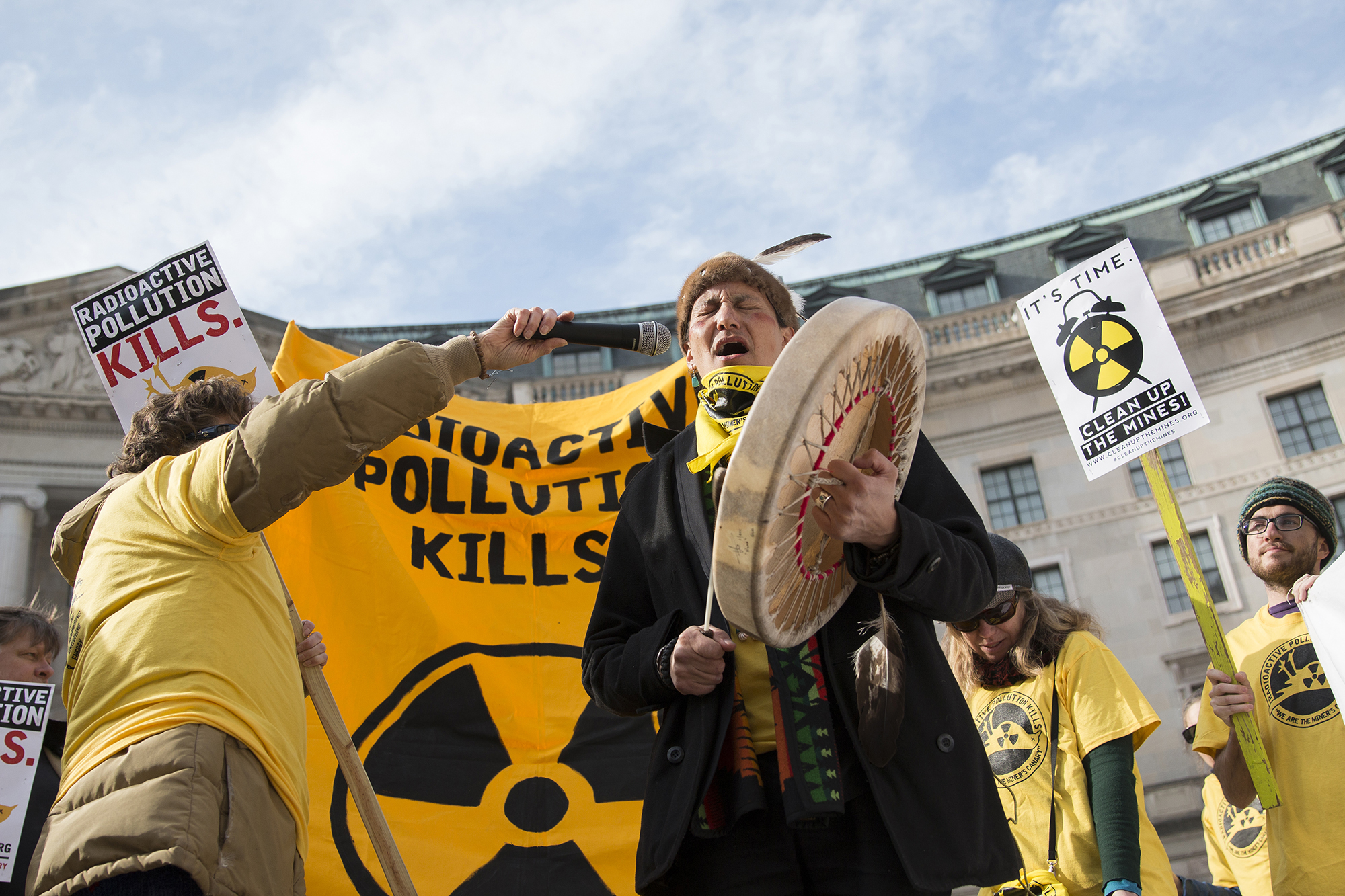 VIEW LARGER Tribal areas have been particularly hard hit by uranium mining in northern Arizona. In this 2016 photo, Klee Benally, a Navajo and member of the group Clean Up the Mines, takes part in an anti-mining rally at EPA headquarters.
Danika Worthington/Cronkite News

Amber Reimondo, the energy program director for the Grand Canyon Trust, said Congress is the only governmental body that can permanently ban new ventures in the area. The Senate's version of the defense spending bill passed Thursday, but as it does not have the Grand Canyon Centennial Protection Act in it, she said the versions of the spending bills will next go to a conference committee to be negotiated.

She said the National Congress of American Indians, the Intertribal Council of Arizona and several individual tribal nations, including the Havasupai Tribe and Navajo Nation, have stood up in support of a permanent ban.

"From the point that the uranium is taken out of the ground, to its transportation, to its processing — it's impacting Indigenous communities," said Reimondo.

She said the Navajo Nation banned uranium mining and its transportation on its lands in 2005, but on state-owned roads crossing the nation the Navajo government couldn't block mining companies from transporting ore from the Grand Canyon region. Reimondo said that ore travels to the sole conventional uranium mill in the country, the White Mesa Uranium Mill in southeastern Utah. The mill, which has confirmed contamination she said, is near the Ute Mountain Ute community of White Mesa.

"There were about 22 uranium mills on the Colorado Plateau at one point, and all of them left some form of toxic legacy behind," said Reimondo.

She said Canyon Mine along the south rim of the Grand Canyon is the only uranium mine in the area with valid existing rights, but there were once other mines along the north and south rims. Unless all contamination is removed, a mine has the capacity to contaminate the surrounding environment, so it needs to be continually managed.

She said the geology of the area looks like "a pipe system that was designed by Doctor Seuss." It's hard to predict where water in one part of the Grand Canyon region will come out.

Contaminated water from a mine on the rim could impact the water in the canyon.

The area is culturally important to many tribal nations, like the Havasupai Tribe, whose lands are in the canyon. The community relies on the aquifer for water and for money, as it also feeds its iconic falls, which are currently closed to tourists due to COVID-19.

"If that groundwater aquifer were to ever become contaminated with uranium contaminated water from a mine, that would have devastating impacts for the Havasupai," said Reimondo.

Once an area is contaminated with uranium it can be dangerous for thousands upon thousands of generations to come. She said once uranium is exposed to oxygen it's "incredibly mobile," and the least radioactive isotope in uranium cuts its radioactive output by half in 4.5 billion years.

"That's how long we have to manage uranium once we've exposed it to the elements and made it readily available for mobilization to the human environment, which might be our drinking water or air," said Reimondo. "What the Grand Canyon mining ban would do is to prevent growing the legacy that already exists."

She says when humans are exposed to uranium, the radioactive particles emit gamma rays that can alter DNA and lead to kidney failure or a variety of cancers, like stomach, lung and blood cancers.

The Centers for Disease Control and Prevention did a study in 2016 in the Navajo Nation, where there were once more than 1,000 mines, according to a 2019 Grand Canyon Trust report. It said 27% of the 599 people tested in the nation had higher levels of uranium in their urine, as compared to 5% with high levels in the U.S. population at large.

"If uranium mining is banned in [the Grand Canyon region], it'll actually be a boon to the economy and general taxpayer costs," said Reimondo. "Past uranium mining contamination — it costs into the billions of dollars to clean up."

When companies can't remove the contamination completely, it means they have to spend millions or billions of dollars to manage it by continually pumping groundwater to keep it from spreading.

"It's not a simple cleanup for like a glass of spilled milk," said Reimondo. "It's something that has to be carefully managed for longer than any of us can actually fathom."

Scientists: Border wall construction wreaking havoc at Quitobaquito Springs Tohono O'odham Nation hopes COVID-19 curve is flattening following spike Daily news roundup: No new coronavirus deaths reported by state, impact of census strong in AZ
By posting comments, you agree to our
AZPM encourages comments, but comments that contain profanity, unrelated information, threats, libel, defamatory statements, obscenities, pornography or that violate the law are not allowed. Comments that promote commercial products or services are not allowed. Comments in violation of this policy will be removed. Continued posting of comments that violate this policy will result in the commenter being banned from the site.