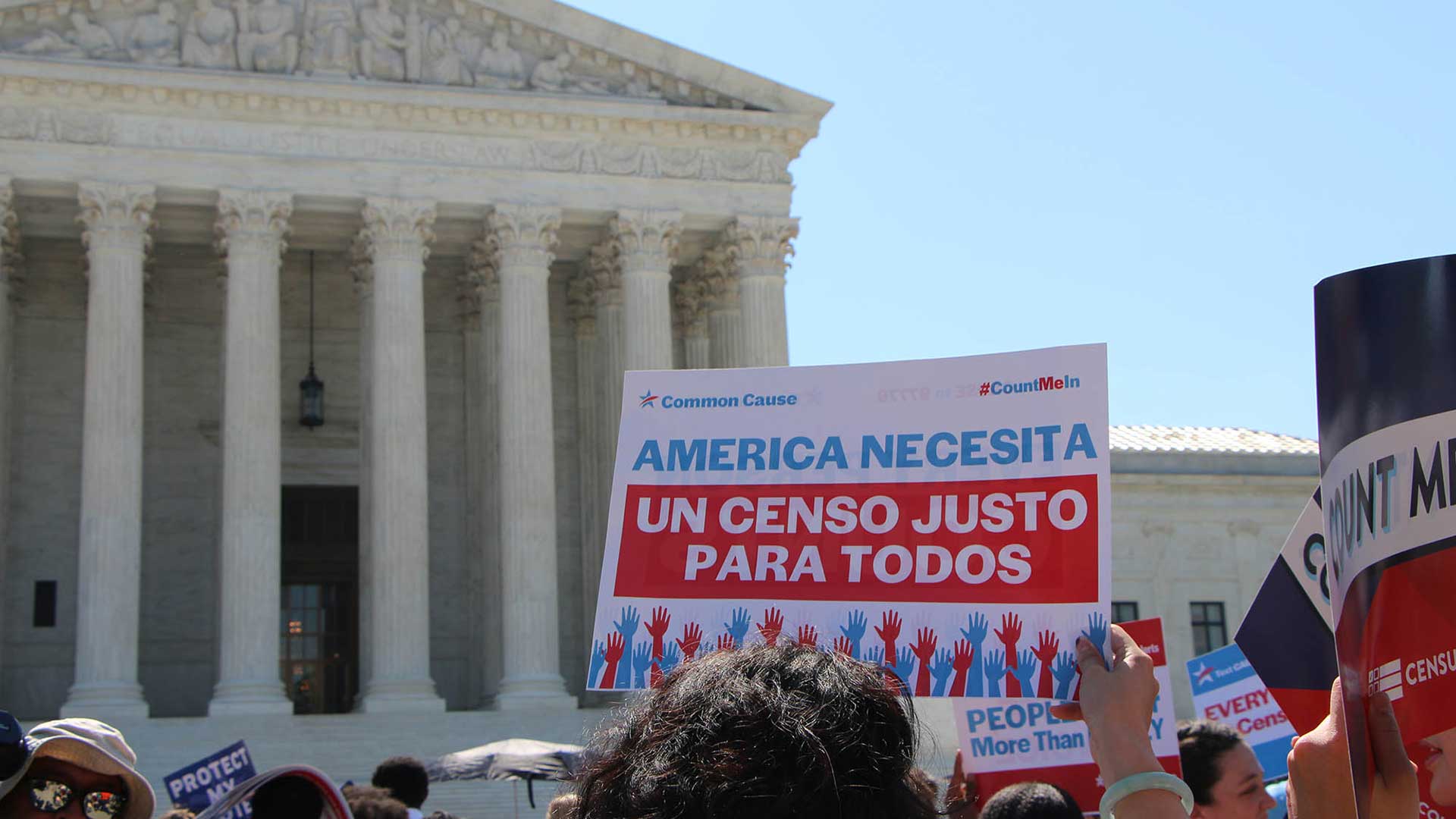 Protesters in 2019 at the Supreme Court, which rejected a Trump administration plan to add a citizenship question to the 2020 census. Now the president is directing the Census Bureau to take “all appropriate action” to determine the number of undocumented immigrants, even without the question.
Miranda Faulkner/Cronkite News

PHOENIX — President Donald Trump said Tuesday he will exclude undocumented immigrants in the 2020 census when it comes to allocating seats in Congress, a move critics called unconstitutional and unenforceable.

Opponents immediately vowed to sue over Trump’s memorandum, which comes a little more than a year after the Supreme Court rejected the administration’s attempt to include a citizenship question on the 2020 census.

“Today’s memorandum from Donald Trump to Lyin’ (Commerce Secretary) Wilbur Ross epitomizes the lawlessness of this administration,” said a statement from Thomas Saenz, president of the Mexican American Legal Defense and Educational Fund. “As the Supreme Court has long held, persons are persons under our Constitution, regardless of immigration status.”

MALDEF and the American Civil Liberties Union both said they would sue if the administration carries through on the order.

But the president’s supporters celebrated the move, which Rep. Paul Gosar, R-Prescott, said shows the “principle of one person one vote and the allocation of federal tax money to states and cities is being protected.”

“Counting illegal aliens for purposes of resource allocation steals money from cities that follow the law and rewards sanctuary cities that harbor criminals,” Gosar said in an emailed statement. “The President is taking prudent and lawful steps here to protect real Americans.”

Trump announced the move in a memorandum to the Commerce Department, directing it to “take all appropriate action … to provide information permitting the president” to exclude undocumented immigrants from the census, which is used to determine how many congressional representatives each state gets.

The president justified the exclusion of undocumented immigrants from the census count because he said it “reflects a better understanding of the Constitution and is consistent with the principles of our representative democracy.”

Commerce and the Census Bureau did not immediately respond to questions on how they could determine the number of undocumented immigrants when the citizenship question was specifically prohibited by the Supreme Court.

But Trump’s memo and a White House spokesman both pointed to an executive order from July 2019 that directed the Census Bureau to collect citizenship records from federal departments and agencies in an effort to identify the undocumented population within the census.

Critics called the move just another example of Trump trying to rally his base ahead of the November election with more anti-immigrant rhetoric.

Vanita Gupta, president of the Leadership Conference on Civil and Human Rights, said Tuesday that “the civil rights community will fight to ensure everyone — regardless of immigration status — knows that they should be counted and that the Census Bureau can’t share personal information with ICE or law enforcement.”

Her statement went on to say that the administration’s interpretation of the Constitution is faulty. The line that says “representatives shall be apportioned among the several states according to their respective numbers, counting the whole number of persons in each state, excluding Indians not taxed” means everyone, citizen or not, should be counted, Gupta said.

Besides being used for congressional apportionment, census numbers are also used in the allocation of billions of dollars in federal funding for communities across the country. If entire groups are not counted in the census, their communities stand to lose money that would have gone into government programs, hospitals, infrastructure and schools.

“It’s an attempt to sabotage the census, and it’s shameful on all counts,” said Clarissa Martínez de Castro, deputy vice president of policy and advocacy at UnidosUS.

Far from being shameful, however, Gosar tweeted that the move is constitutional and he thanked the president for “standing up for American citizens!”

But Martínez de Castro called it an attack not just on undocumented immigrants, but on the Latino community as a whole. She said UnidosUs does not plan legal action, but will instead lead efforts to inform Latinos about misinformation and to ease any fears about the census so everyone can still get counted.

“The action here should be clear: respond to the census and get informed,” Martínez de Castro said.

Daily news roundup: No new coronavirus deaths reported by state, impact of census strong in AZ Analysis shows how Trump's census change would impact Congress Despite Supreme Court ruling, DACA slow to be restored
By posting comments, you agree to our
AZPM encourages comments, but comments that contain profanity, unrelated information, threats, libel, defamatory statements, obscenities, pornography or that violate the law are not allowed. Comments that promote commercial products or services are not allowed. Comments in violation of this policy will be removed. Continued posting of comments that violate this policy will result in the commenter being banned from the site.