Advocates are rallying against the possible detention of a medically vulnerable DACA recipient. by Alisa Reznick Tweet 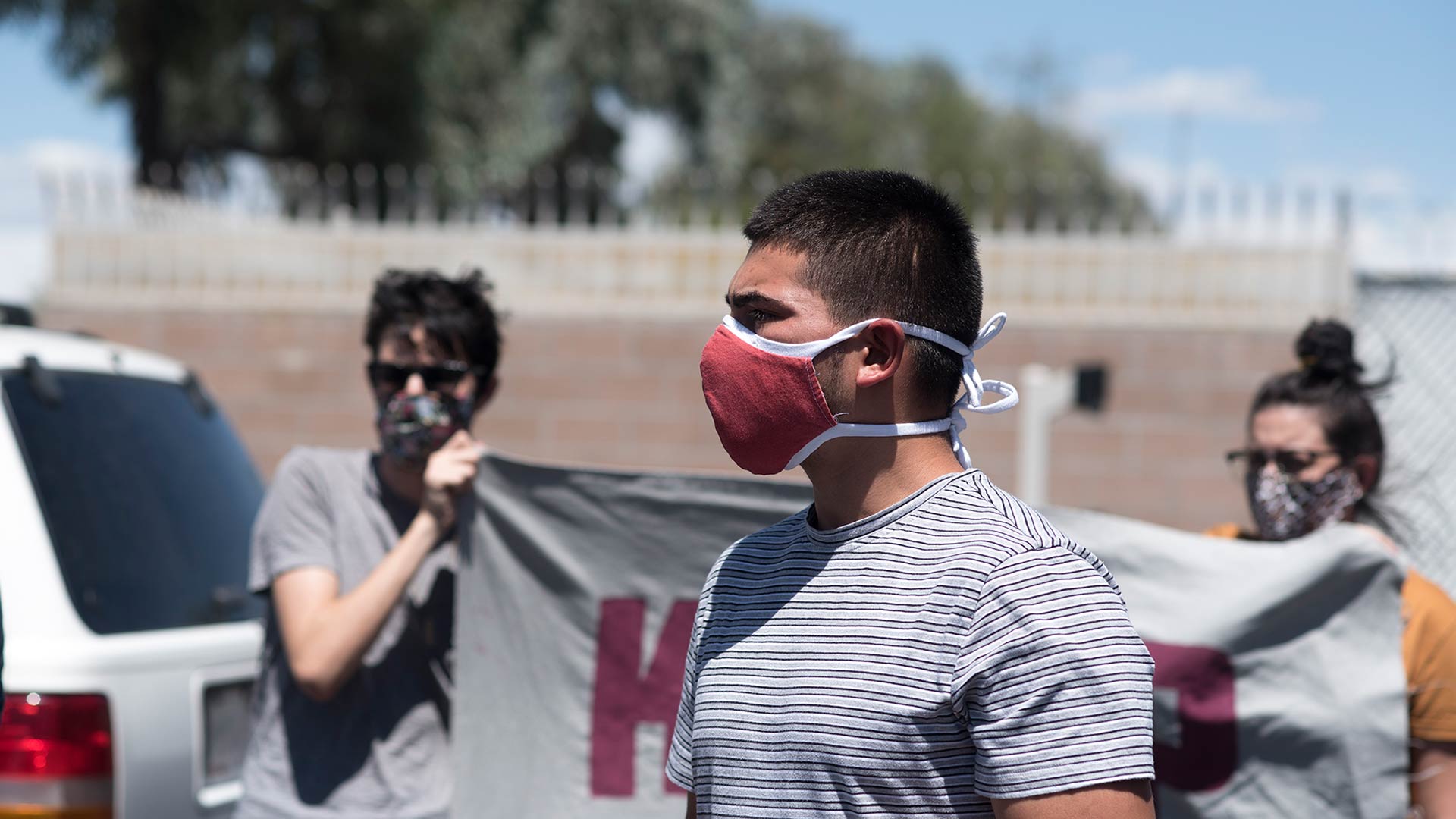 Brayann Lucero, 19, is greeted by community members and journalists after leaving an Immigration and Customs Enforcement field office in Tucson on June 16, 2020.
Alisa Reznick / AZPM

Brayann Lucero has lived in Tucson since he was 2 years old. He is one of almost 700,000 young immigrants to receive work permit and temporary protection from deportation as a recipient of the Obama-era Deferred Action for Childhood Arrivals program, or DACA.

But his status expired in May. His oldest sibling, Jesus, said Lucero was in the middle of renewing his DACA status when Immigration and Customs Enforcement asked him to check in to a field office in Tucson.

The letter, sent May 22, asked Lucero to come to the office on the morning of June 8 for an immigration case review but did not give further details. Jesus said the family hired lawyers to find out more about what to expect.

"We tried to figure out what was happening, and the attorney was able to get information from ICE that their intention was to detain Brayann," Jesus said.

Jesus said the family was told they must pay a $12,000 bond to keep Lucero out of detention. Lucero has lupus, an autoimmune disease that requires daily medication and is thought to put people at a higher risk of COVID-19. As cases surge in detention facilities, Jesus said the family worried if Lucero is taken into custody, he wouldn't survive.

Advocates held a rally for Lucero on Monday. Among the speakers was Sarah Roberts — a nurse practitioner who read statements from other doctors attesting to the dangers Lucero faced in detention as someone with lupus — and Mo Goldman, one of the immigration attorneys representing Lucero.

Goldman said it is fairly rare to see ICE focus on DACA recipients. But it Tucson, he's noticed they happen more often than in other places.

"Tucson specifically has more hostility toward DACA recipients than anywhere else in the United States," Goldman said. "The ICE office and the legal department has been recalendaring old deportations that were closed by the Obama administration — meaning they're putting those cases back in front of a court."

He said that means the number of deportation trials set for those who are normally protected by things like DACA could go up.

"That's a frightening proposition, especially as we consider the DACA program could be rescinded by the Supreme Court some time this month," he said.

Lucero's younger sister Nicole said her family felt it was unfair of ICE to ask for thousands of dollars in exchange for his freedom. She read a statement from her family. 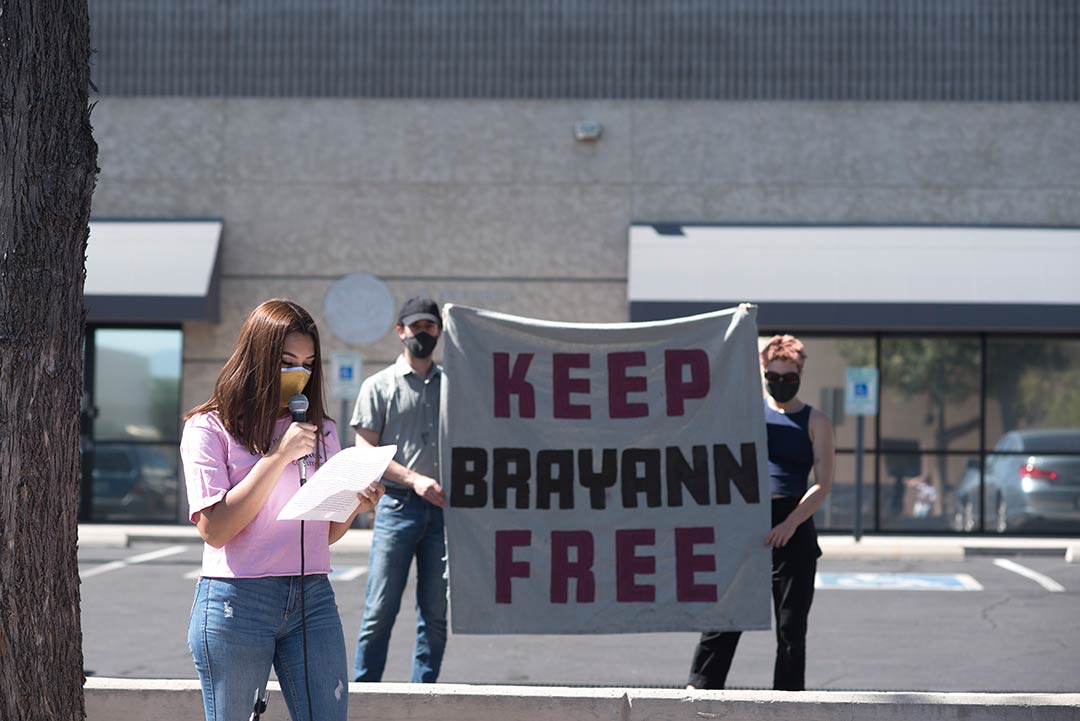 "We as a family need him [Lucero] by our side, he has a little sister with Down syndrome and she is very attached to him," she said. "We are very sure that he will continue studying and working to be in this country. We want to ask ICE to give us this opportunity — I'm asking you to drop the bond amount and release him on his own recognizance."

Advocates submitted a package to ICE that included a description of his medical condition, testimony from Lucero himself and other community advocates and documentation of his pending DACA renewal.

He did not attend the rally on Monday but went to a meeting asked for by ICE at the same office on Tuesday. There, he was fingerprinted, fitted with an ankle monitor and sent home without paying bond. Lawyer Mo Goldman said this is a win, but his immigration case is still pending. A tentative court date has been set for July.

Leaving the office carrying an extra mask and the charging unit for his ankle monitor, Lucero said he was relieved.

"I’m grateful for the great team I have. Thank you to everyone out there," he said. "I’m just grateful to the people I have around me."

In an email, an ICE spokesperson Yasmeen O'Keefe said Lucero entered into deportation proceedings last May after he was apprehended by the U.S. Border Patrol near Robles Junction.

"On that same day he was released from custody, pending immigration removal proceedings," the email read. "Following a review of Lucero’s immigration history, U.S. Immigration and Customs Enforcement (ICE) instructed Lucero to report to ICE on June 8 for a review of his case."

What’s next for DACA recipients after SCOTUS decision Blood donations in southern Arizona remain low heading into the holidays Senate committee OKs Magnus for customs chief
By posting comments, you agree to our
AZPM encourages comments, but comments that contain profanity, unrelated information, threats, libel, defamatory statements, obscenities, pornography or that violate the law are not allowed. Comments that promote commercial products or services are not allowed. Comments in violation of this policy will be removed. Continued posting of comments that violate this policy will result in the commenter being banned from the site.