Trump’s Phoenix trip first in weeks, as he aims to ‘move around’ more

The planned tour of a Honeywell facility making N95 masks is the president's first trip away from the Washington area in more than a month. by Joshua Gerard Gargiulo, Cronkite News Tweet 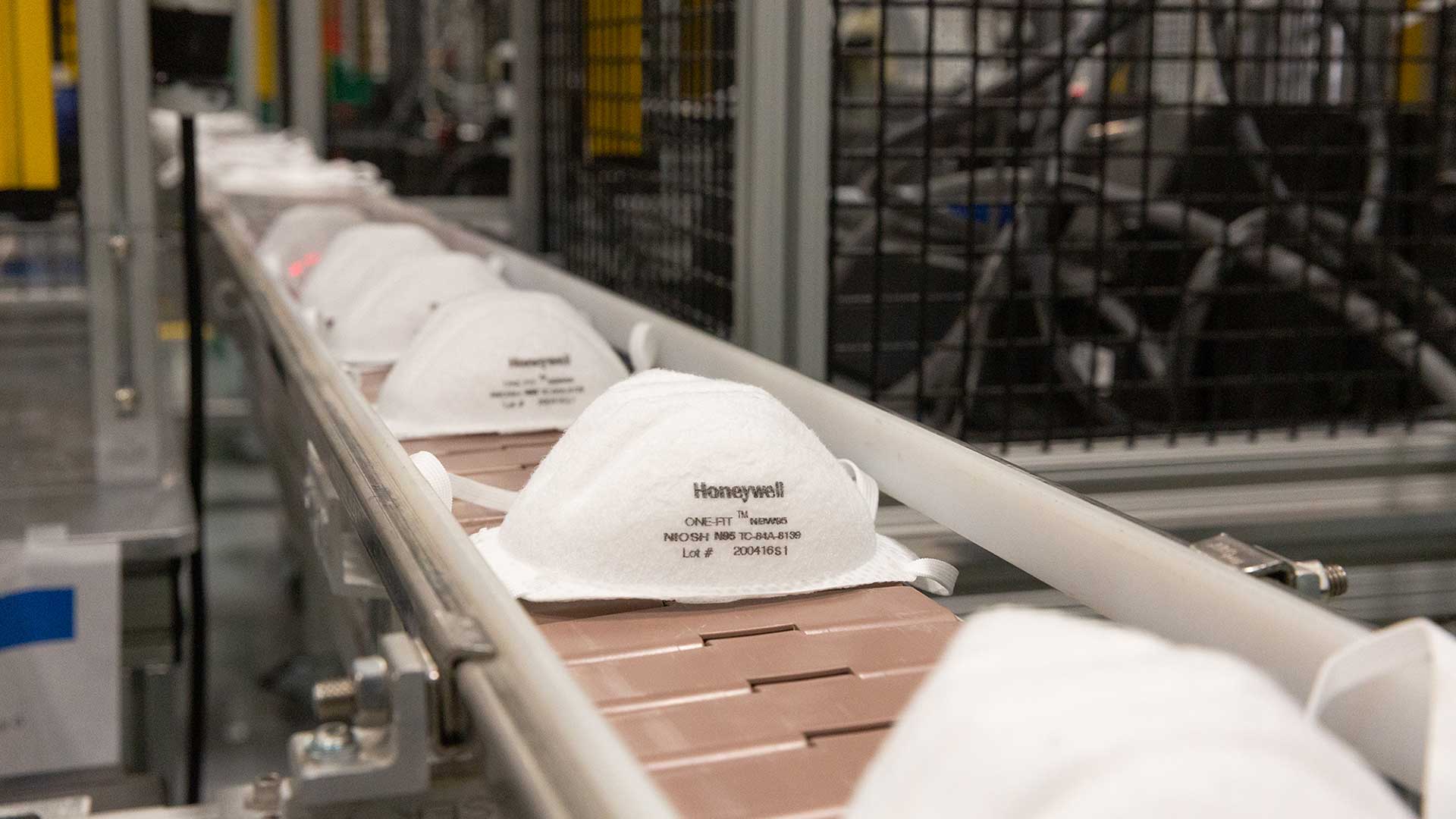 Honeywell has converted some of its plants so that they can produce health care gear like the N95 masks manufactured in Phoenix. President Donald Trump is scheduled to visit the Phoenix facility Tuesday.
Photo courtesy of Honeywell

PHOENIX – President Donald Trump will visit Phoenix next week to tour a Honeywell facility that was revamped last month to make N95 masks, his first trip away from the Washington area in more than a month.

Trump disclosed the trip Wednesday during a White House meeting on reopening the U.S. in the face of COVID-19, naming Honeywell as one of several manufacturers that have “stepped up like nobody has ever seen before” and shifted to make medical equipment.

“These companies – General Motors and … Ford in another way and GE,” he said, according to a transcript of the meeing. “So many companies – Honeywell – they’ve stepped up.”

No details have been released on Tuesday’s planned visit, except that Trump will tour the plant “to highlight critical medical equipment production and the addition of 500 manufacturing jobs in the state,” according to a tweet from White House Deputy Press Secretary Judd Deere.

“We have moved quickly to expand our production capacity for N95 masks globally and are pleased to announce our second new U.S. manufacturing line to supply the Strategic National Stockpile,” Adamczyk said then, according to a company statement

In addition to N95 masks being produced at its Phoenix engine campus, Honeywell has also converted facilities in Michigan, Rhode Island and Germany to produce masks and hand sanitizer, according to its website. A Honeywell spokesman said Thursday only that the company “is looking forward to welcoming President Trump to its new N95 mask production facility in Phoenix.”

Calls seeking comment on the visit from Gov. Doug Ducey, Mayor Kate Gallego and members of the state’s congressional delegation were not immediately returned Thursday. But in a press conference Wednesday, Ducey said “the president is always welcome in Arizona,” even though this visit comes as the state continues to encourage social distancing.

The trip would be Trump’s 11th visit to Arizona in the past five years and his second this year, after he hosted a rally in Phoenix following his impeachment acquittal in mid-February. But this will be his first trip at a time of social distancing and other restrictions forced by the coronavirus.

Ducey on Wednesday said he is extending his stay-home order, which had been scheduled to end Friday, through at least May 15. The order directs people to stay home, to socially distance when away from home and it limits business activities to only those considered essential services.

When asked about the president’s visit in light of the virus, Ducey said. “We don’t set the White House travel schedule,” before adding, “I am asking people to stay home, stay healthy and stay connected.”

Trump this week declined to extend a federal stay-at-home directive, even though many states have continued theirs. He said Wednesday that his trip to Arizona was related only to industry, and that it would be limited, he also indicated that he is eager to return to the massive campaign-style rallies – like the February one in Phoenix – that he held regularly before COVID-19 shut down much of the economy.

“We’re going to start to move around,” said Trump, who also indicated a trip to Ohio might be in the works. “And hopefully, in the not-too-distant future, we’ll have some massive rallies and people will be sitting next to each other.

“Look, I hope that we’re going to be able to do some good, old-fashioned, 25,000-person rallies, where everyone is going wild because they love our country, OK?” he said, after noting that he could not “imagine a rally where you have every fourth seat full.”

Trump, who has traveled regularly during his tenure – from regular weekend outings to his nearby golf course to business and campaign trips around the country and the world – has been unusually tied to the White House after COVID-19 hit. Except for a planned trip this weekend to nearby Camp David, the Phoenix trip would be his first time outside the Washington area since March 28, when he went briefly to Norfolk, Virginia, to see off USNS Comfort as the hospital ship headed to New York City to help with coronavirus cases there.

Arizona Chamber of Commerce throws support behind Ducey’s pandemic recovery plan COVID numbers stay steady Two-thirds of Arizona has high COVID transmission rates
By posting comments, you agree to our
AZPM encourages comments, but comments that contain profanity, unrelated information, threats, libel, defamatory statements, obscenities, pornography or that violate the law are not allowed. Comments that promote commercial products or services are not allowed. Comments in violation of this policy will be removed. Continued posting of comments that violate this policy will result in the commenter being banned from the site.