× CORONAVIRUS: The latest coverage and local resources regarding COVID-19 from the Arizona Public Media newsroom.
February 13, 2020

Most who spoke to the appropriations subcommittee were thankful for federal help, but also forceful about federal shortcomings. by Joshua Gerard Gargiulo, Cronkite News TWEET SHARE 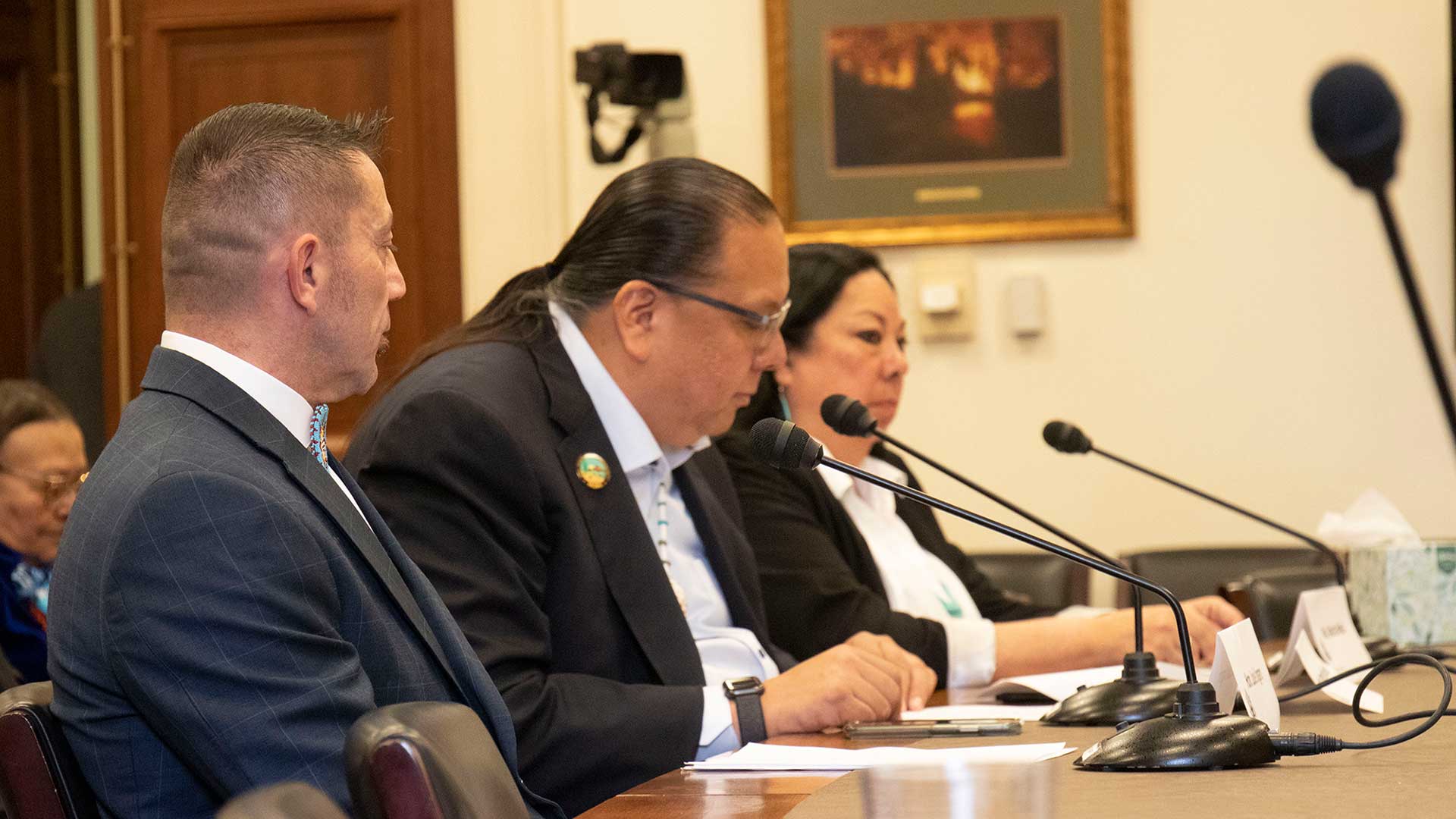 WASHINGTON – Tribal officials this week raised issues ranging from polluted water to underfunded police, but there was one message they all had for House lawmakers: The government needs to be a more reliable partner on critical projects.

Those comments came during the second day of testimony by Native American representatives from across the country – including a number from Arizona – who outlined their funding priorities for fiscal 2021 to a House Appropriations subcommittee.

Most of the speakers were thankful for federal help, but also forceful about federal shortcomings.

“Under current funding levels, it would take 60 years, or another three generations of students, before the current backlog could be eradicated” in school construction, said Gila River Indian Community Gov. Stephen Roe Lewis.

But Lewis, like many of the witnesses, also touted efforts to find a way around the many problems tribal areas face. In the case of his tribe, it is a pilot program that let the community build a new school and then lease it back to the Bureau of Indian Affairs.

“The community has had visits from a number of tribal leaders and has offered advice to a number of other tribes,” Lewis said.. “Because we believe as the pilot tribe for this program we have a responsibility to ensure other Tribes and students are afforded the faculties and educational opportunities they deserve.”

Rep. Betty McCollum, D-Minn., the chairwoman of the Appropriations Subcommittee on Interior, Environment and Related Agencies, said funding the many needs in Indian Country can be “a balancing act” for lawmakers.

“I get an allocation, … in that allocation I have to fund Indian health, education and funding in public safety and environmental,” McCollum said during a break in Wednesday’s hearing. “But also in there is Environmental Protection Agency, and tribes are applying for safe drinking water out of that EPA funding. 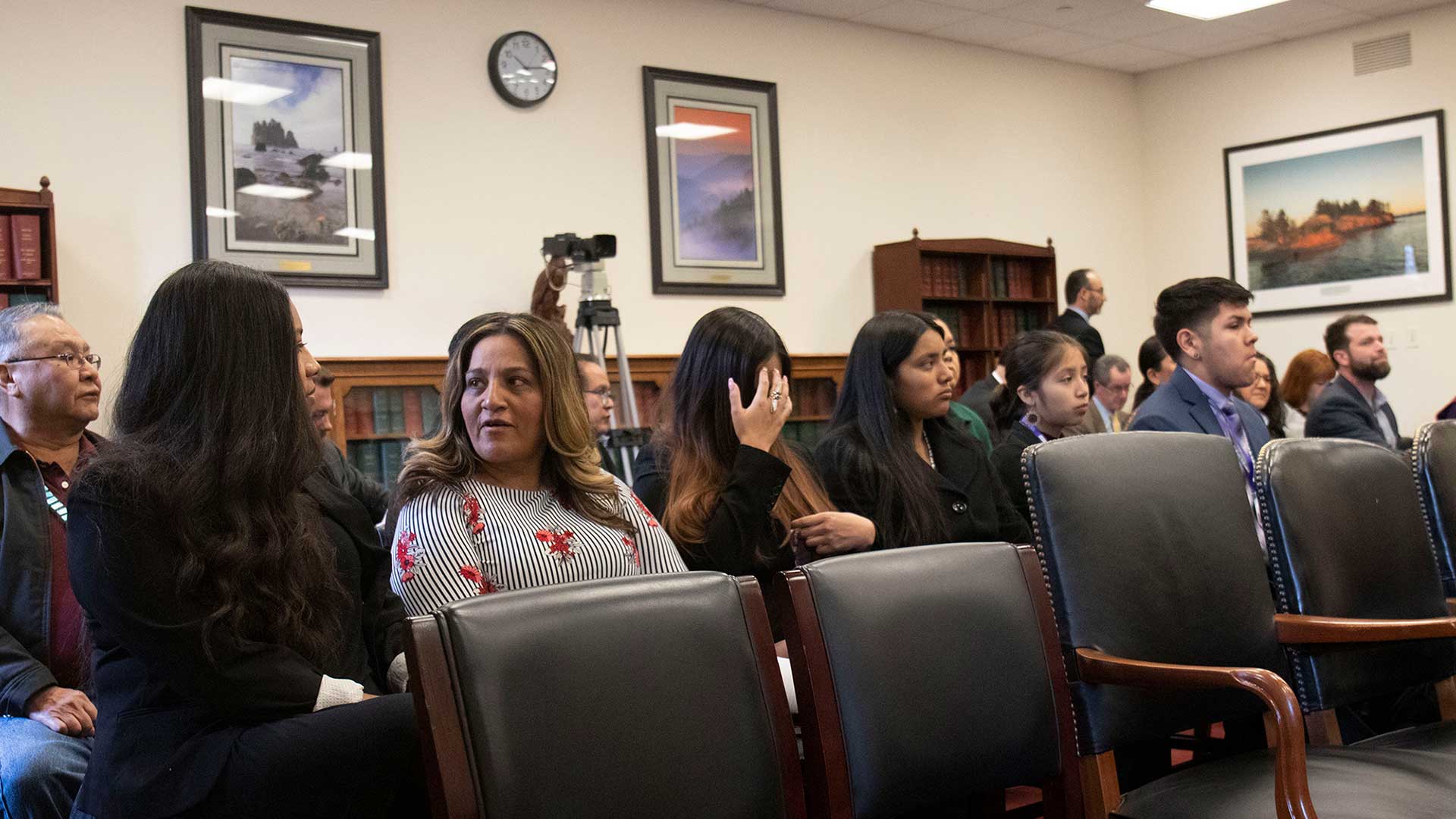 Youth from the Gila River Indian Community were among those on hand for the House Appropriations Committee hearing on tribal priorities for the fiscal 2021 federal budget.
Joshua Gerard Gargiulo/Cronkite News

“So it is a balancing act with the limited dollars I have to make sure that every tribe has full access to the grants and the money that are available under that limited allocation,” she said.

Those dollars have to stretch to cover issues ranging from facilities – Lewis said some Gila River schools are more than 100 years old – to salaries to services.

San Carlos Apache Chairman Terry Rambler said the priority needs for his tribe include public safety. He told the committee how the tribe’s courts and police were forced to operate out of modular quarters after BIA-funded buildings fell into disrepair. Now the modulars are decrepit, “with no air conditioning, no running water, disgusting port-a-johns and little workspace.”

He recounted a 2018 visit by Rep. Tom O’Halleran, D-Sedona, when congressional staff were forced to use outdoor toilets on a 120-degree day because the water in the building was out. Later during the visit, the power went out and they had to continue using the lights on their phones.

“This unfortunately is not unique, but instead is a near-daily occurrence,” Rambler said.

For Jamie Henio, a Navajo Nation Council delegate, the lack of federal funding for police has led to high turnover and that forces some officers to work 12-hour shifts. He said the tribe regularly loses newly trained officers to neighboring agencies, like the Albuquerque Police or the Bernalillo County Sheriff’s Department, that “can offer generous compensation packages and benefits” that the Navajo cannot match. 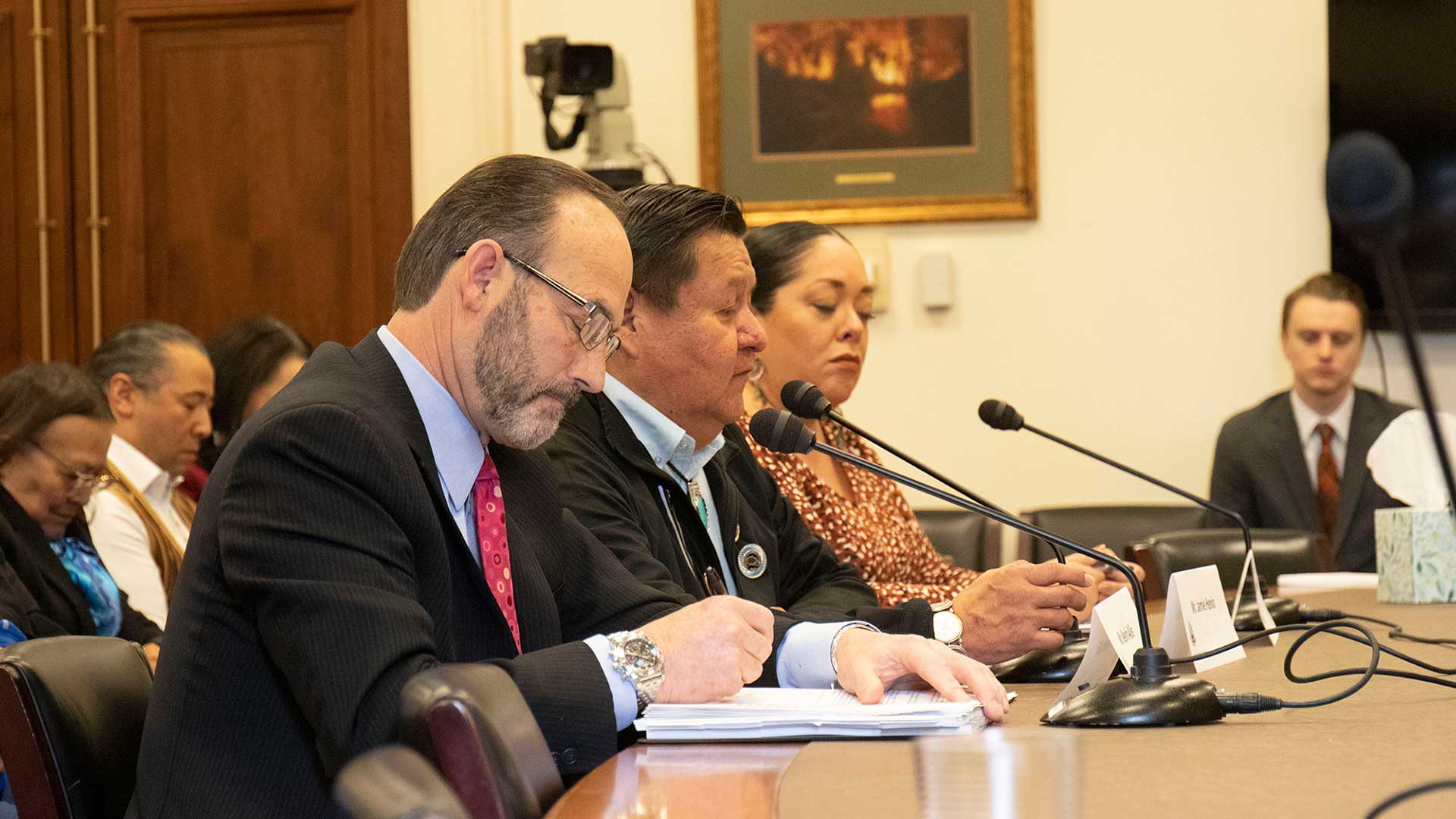 Hopi Chairman Timothy Nuvangyaoma talked about the high unemployment his people face because of the lack of economic development opportunities on their remote reservation. But he prioritized the tribe’s schools, its arsenic mitigation efforts and its push for a new detention center – after the previous one was condemned in 2016, forcing tribal police to drive prisoners 80 miles to the nearest jail.

The Hopi have grappled with arsenic contamination of its water supply for decades, he said, with eight tribal villages still facing arsenic levels more than three times the legal limit. He said the Hopi Arsenic Mitigation Program is now a priority for both the Indian Health Service and EPA, and while planning has been funded for fiscal 2020 and 2021, future funding will be needed for design and construction.

Roads were a recurring problem for the witnesses. Henio cited data showing 388 miles of the Navajo Nation’s 505 miles of roads were unpaved.

McCollum closed both the morning and afternoon sessions by telling witnesses she “had a lot of homework.”

Daily News Roundup: Fire evacuations, Ducey on rise in cases, detention center accused of abuse Arizona Democrats among those backing sweeping police reform bill Immigration advocates criticize visa restrictions under Trump executive order
By posting comments, you agree to our
AZPM encourages comments, but comments that contain profanity, unrelated information, threats, libel, defamatory statements, obscenities, pornography or that violate the law are not allowed. Comments that promote commercial products or services are not allowed. Comments in violation of this policy will be removed. Continued posting of comments that violate this policy will result in the commenter being banned from the site.