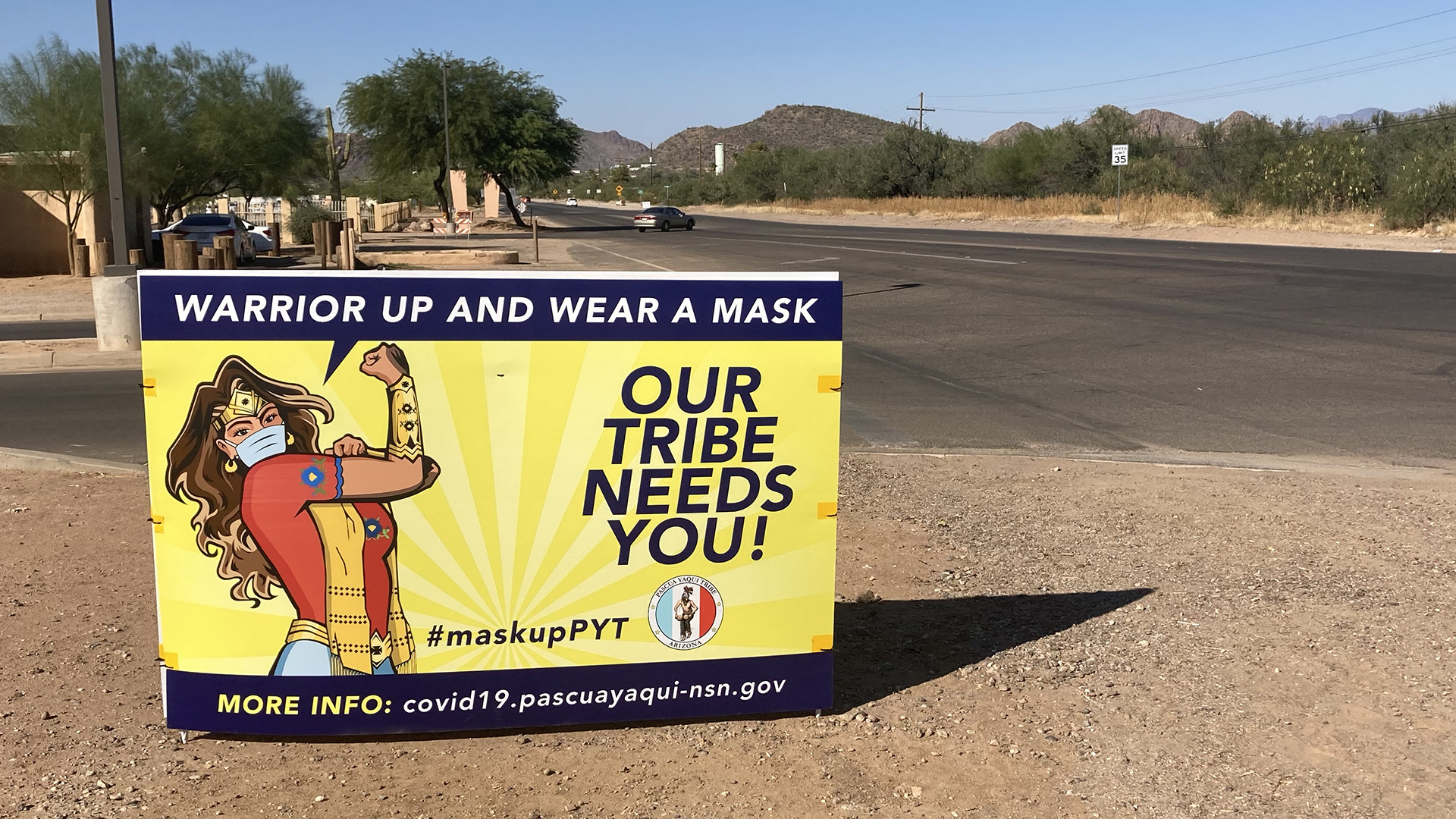 Sign in the Pascua Yaqui Tribe's lands urging tribal members to wear a mask during the COVID-19 pandemic.
Emma Gibson/AZPM

An Arizona federal judge ruled Thursday that there will not be early voting or a ballot drop box in the Pascua Yaqui Tribe's reservation October 26 – 30.

Judge James A. Soto denied the motion, stating that "compelling the Pima County Recorder to set up a last-minute Early Voting Site would cause substantial hardship to the recorder’s ability to properly administer the election, and would hurt the public interest inasmuch it would detrimentally impact the ongoing 2020 General Election in Pima County."

The Pascua Yaqui Tribe filed the lawsuit against Pima County Recorder F. Ann Rodriguez October 12, saying the closure of the early in-person voting site in the reservation diminished the tribal members' living in the reservation opportunity to vote compared to non-tribal members in Pima County. It also argued that the closure violates federal law and erects unconstitutional voting barriers.

“The Pascua Yaqui Tribe is disappointed in today’s ruling, but we believed that this case needed to be brought on behalf of our voting members,” said Pascua Yaqui Tribe Chairman Peter S. Yucupicio. “Pascua Yaqui voters’ voices deserve to be heard – whether it’s one vote or a thousand votes.”

Soto said that the tribe did not prove that without the early voting site this year the community would suffer beyond repair; therefore, it did not meet the burden of proof for a preliminary injunction to establish the site.

He also said there was no evidence that not having the site would make someone unable to vote. Soto wrote that the majority of tribal members in the reservation are signed up for Arizona's Permanent Early Voting List and receive mail at their homes, making voting by mail possible, and when trust in the postal service is an issue, he suggested dropping off the mail-in-ballot at the General Election polling place in the reservation Nov. 3.

The tribe's legal counsel argued that in-person options are vital to Indigenous voter participation as Indigenous voters are less likely to vote by mail. According to a Native American Voting Rights Coalition survey, 29% of Indigenous voters polled from Arizona, New Mexico, Nevada and South Dakota have complete trust a mail-in ballot will be counted. The Secretary of State's Office reports that historically, Native Americans vote in-person on Election Day, and it encouraged counties to used federal pandemic aid funding to "increase in-person early voting opportunities, particularly in rural and tribal communities that have historically faced barriers to voting by mail."

According to the tribe's lawsuit, one in five residents living in the reservation rely on public transportation. The area's public bus service, Sun Tran, estimates it would take voters travelling from the tribal administration building two hours roundtrip to vote at the nearest early voting site almost 7 miles away — Richard Elías – Mission Library. Judge Soto wrote in his opinion that "those 30% could request and potentially receive a ride from the other 70% [of residents who do have a car]." He restated testimony from Chairman Peter S. Yucupicio and Herminia Frias that the tribe could repurpose some of the approximately 100 vehicles it owns to shuttle people to a polling site.

“Yaqui voters deserve the same access to safe and secure voting options as all other voters in the state, and should not need to choose between their health and their right to vote," said Alex Gulotta, the state director of All Voting is Local Arizona.

The tribe argued that like many other Indigenous populations, it's been hit hard by the pandemic. Over the course of the pandemic, the Pascua Yaqui Tribe has reported 575 community members in the Tucson area have tested positive for COVID-19 and 12 have died, as of Oct. 20.

The Pima County Recorder's Office decided to close down the early in-person voting site at the tribal radio station in 2018 a month before the county's primary election. Rodriguez said she did so because of low voter turnout, and physical and IT security issues.

“The Tribe is committed to ensuring that our voters cast their votes,” said Herminia Frias, a council member for the Pascua Yaqui Tribe. “Although that won’t be at our early voting location this year, our team is preparing outreach to ensure that our voters have a voting plan.”

Ballot counting is underway in Pima County Democrats sue to block "audit" of 2020 Arizona election State and tribes sign new gaming compact
By posting comments, you agree to our
AZPM encourages comments, but comments that contain profanity, unrelated information, threats, libel, defamatory statements, obscenities, pornography or that violate the law are not allowed. Comments that promote commercial products or services are not allowed. Comments in violation of this policy will be removed. Continued posting of comments that violate this policy will result in the commenter being banned from the site.