× CORONAVIRUS: The latest coverage and local resources regarding COVID-19 from the Arizona Public Media newsroom.
October 21, 2020

For municipal drinking water systems, fires are felt for years after they’re snuffed out. by Luke Runyon, KUNC TWEET SHARE 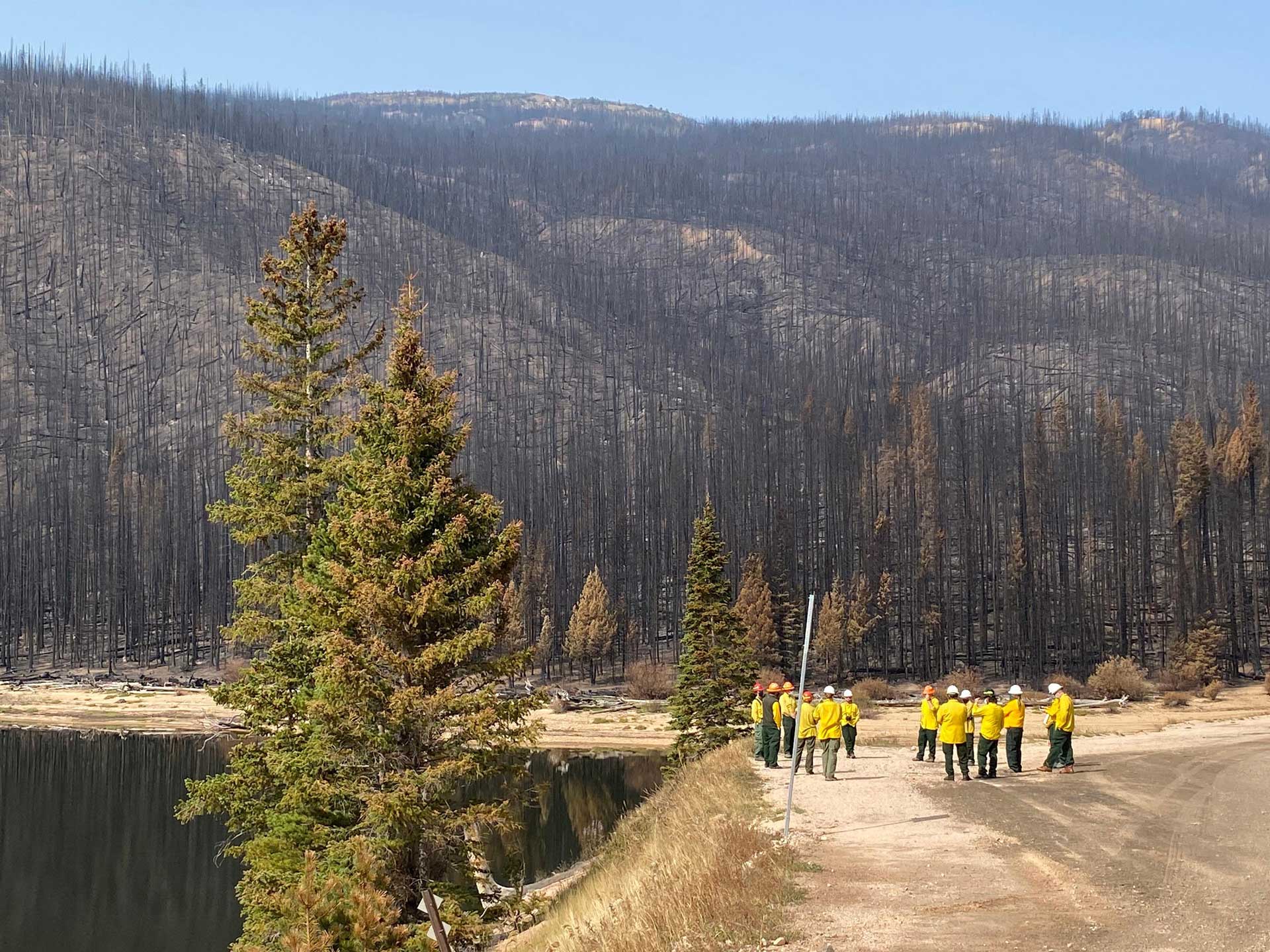 For many communities in the West, the water that flows out of kitchen faucets and bathroom showerheads starts high up in the mountains, as snowpack tucked under canopies of spruce and pine trees.

This summer’s record-breaking wildfires have reduced some of those headwater forests to burnt trees and heaps of ash. In high alpine ecosystems, climate change has tipped the scales toward drier forests, lessened snowpack, hotter summers and extended fire seasons.

Wildfires don’t just cause problems while they’re burning. For municipal drinking water systems, fires are felt for years after they’re snuffed out.

Few places in the West know that as well as Fort Collins, Colorado. Until eight years ago, one of the city’s of main water sources, the Poudre River, was nearly pristine. All year-round it tumbled out of the Rocky Mountains and into the city’s treatment plant for use by 135,000 people. 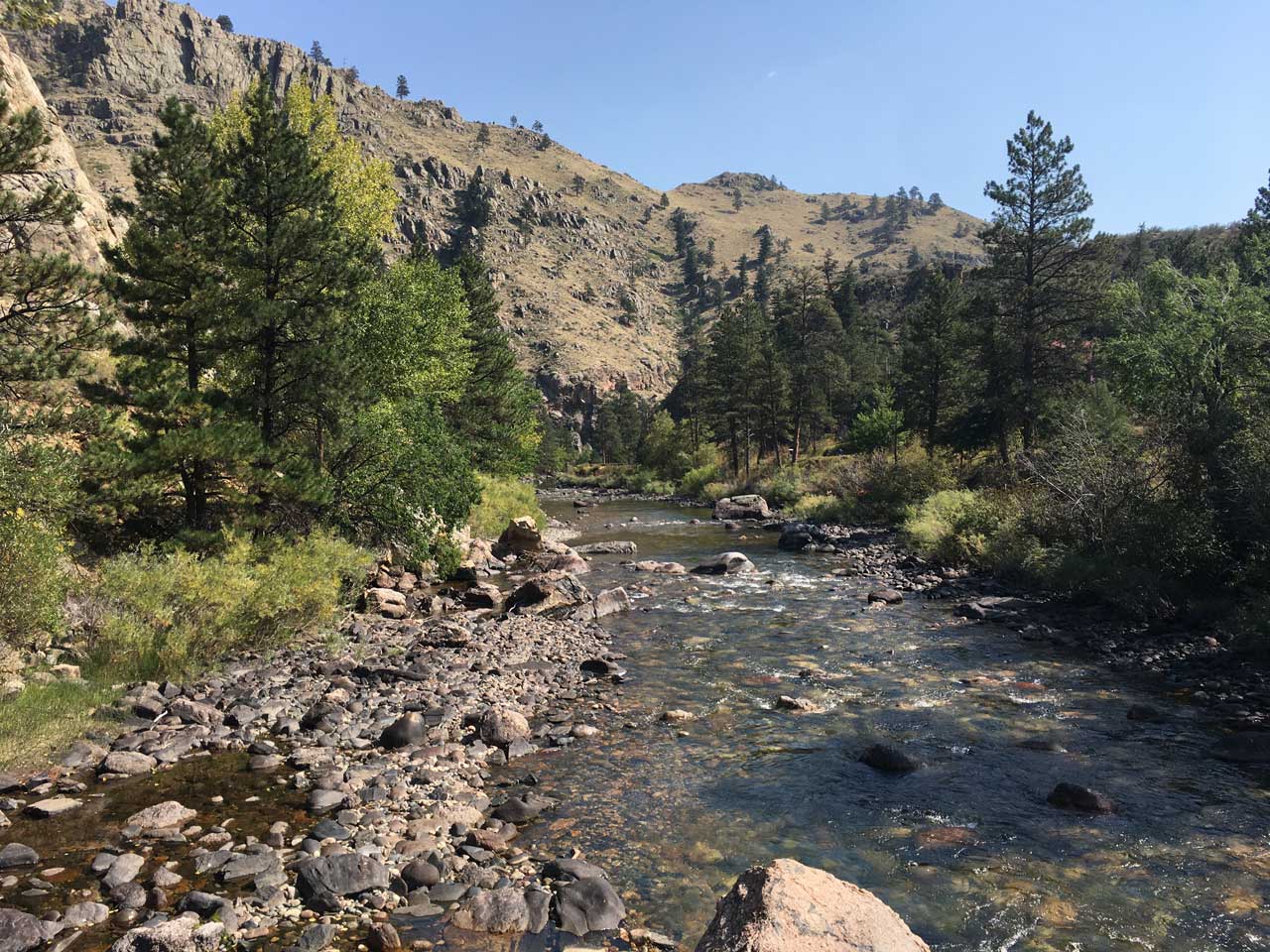 The Poudre River acts as a main drinking water source for the city of Fort Collins, Colorado.
Luke Runyon/KUNC

“We had been privileged and in some ways probably took for granted that these watersheds were providing us consistently clean, clear water, all the time,” said Jill Oropeza, the city’s water quality manager.

On a warm, breezy fall morning, Oropeza stood along the river in its canyon northwest of the city, downstream from where the High Park Fire burned more than 87,000 acres in 2012.

“That was the first time for many of us working there that we had to grapple with the fact that our watersheds are under pressure,” Oropeza said.

In the year after the fire, the river would turn black during heavy rains. Mudslides of ash and scorched soil spilled into the water. Signs along the river, and Highway 14, warned drivers to keep an eye out for slides large enough to sweep cars into the river.

Before utility workers could turn off the city’s drinking water intake on the river, that muddy, ashy water filled and clogged pipes leading to the treatment plant.

“We ended up with a lot of sediment in our pipelines that was difficult to remove,” Oropeza said. 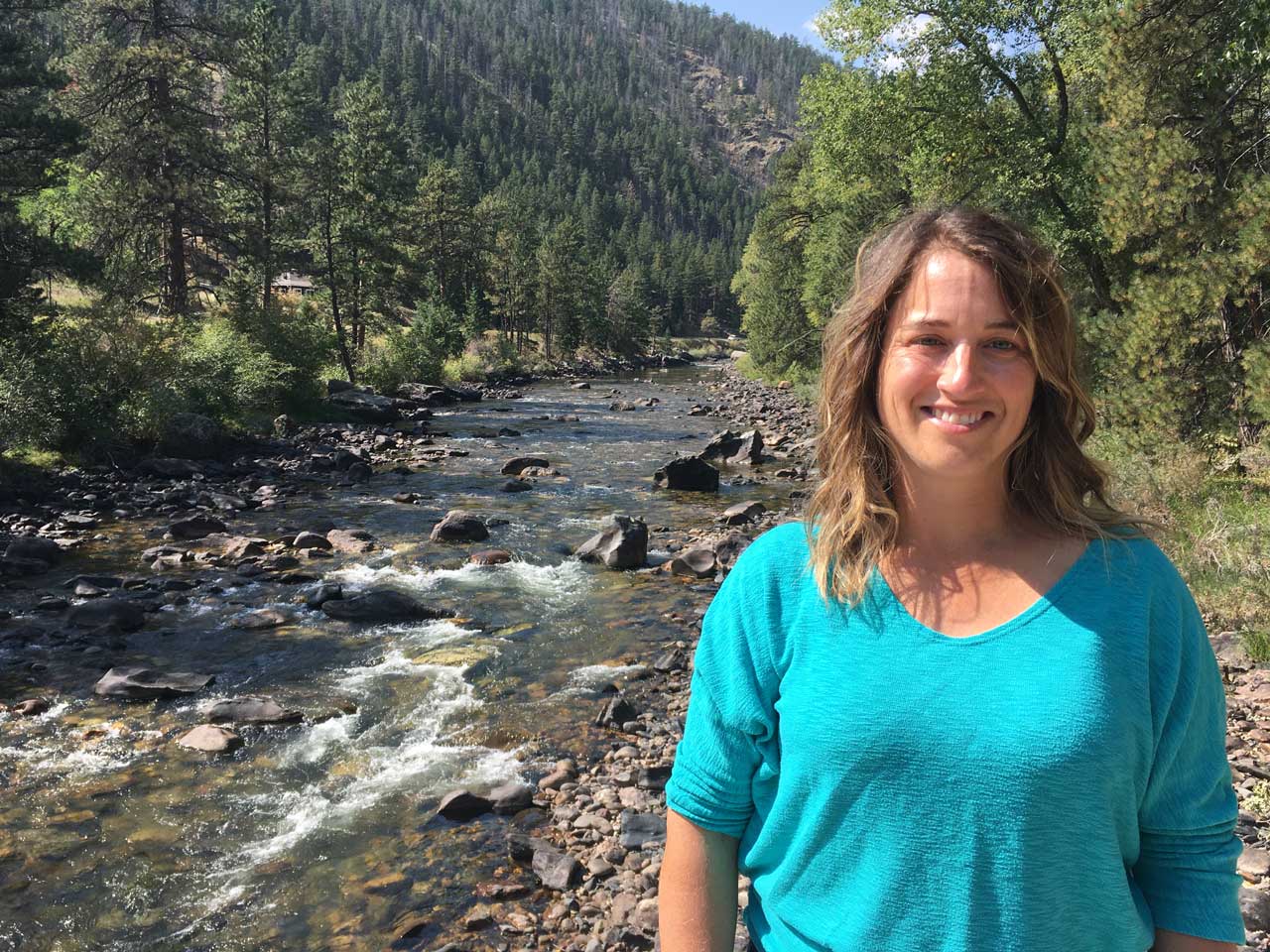 Even if workers managed to move the water through the full treatment process, it still tasted and smelled smoky. Harsher chemicals could remove the odor, but Oropeza said the big lesson that came from the High Park Fire was that it’s best to avoid the river all together when it’s actively draining the burn scar.

That realization led the city to install an early warning system, a measure Oropeza said all cities downstream of large burn scars should consider building in the years after a fire. A monitoring station in Poudre Canyon measures how turbid -- or cloudy -- the water is. If the sensor detects too much sediment, the treatment plant can turn off its river intake, switch to Horsetooth Reservoir, and avoid clogged pipes.

“It became really important for us to have a heads up for when those changes in water quality were occurring,” Oropeza said.

The short-term effects of the High Park’s burn scar on water quality only lasted a few years. In the fall of the next year, a multi-day rainstorm scrubbed much of the ash from the forest floor and caused flood damage across Colorado’s northern Front Range. From a water quality perspective, though, the floods were a small silver lining, Oropeza said. Much of the wildfire debris was washed away in one fell swoop.

But the city’s early warning system is far from obsolete. It’s about to get a lot more use because this summer a brand new fire -- called Cameron Peak -- has burned another broad sweep of the Poudre’s watershed. At more than 164,000 acres, it’s now the largest wildfire in the state’s recorded history. 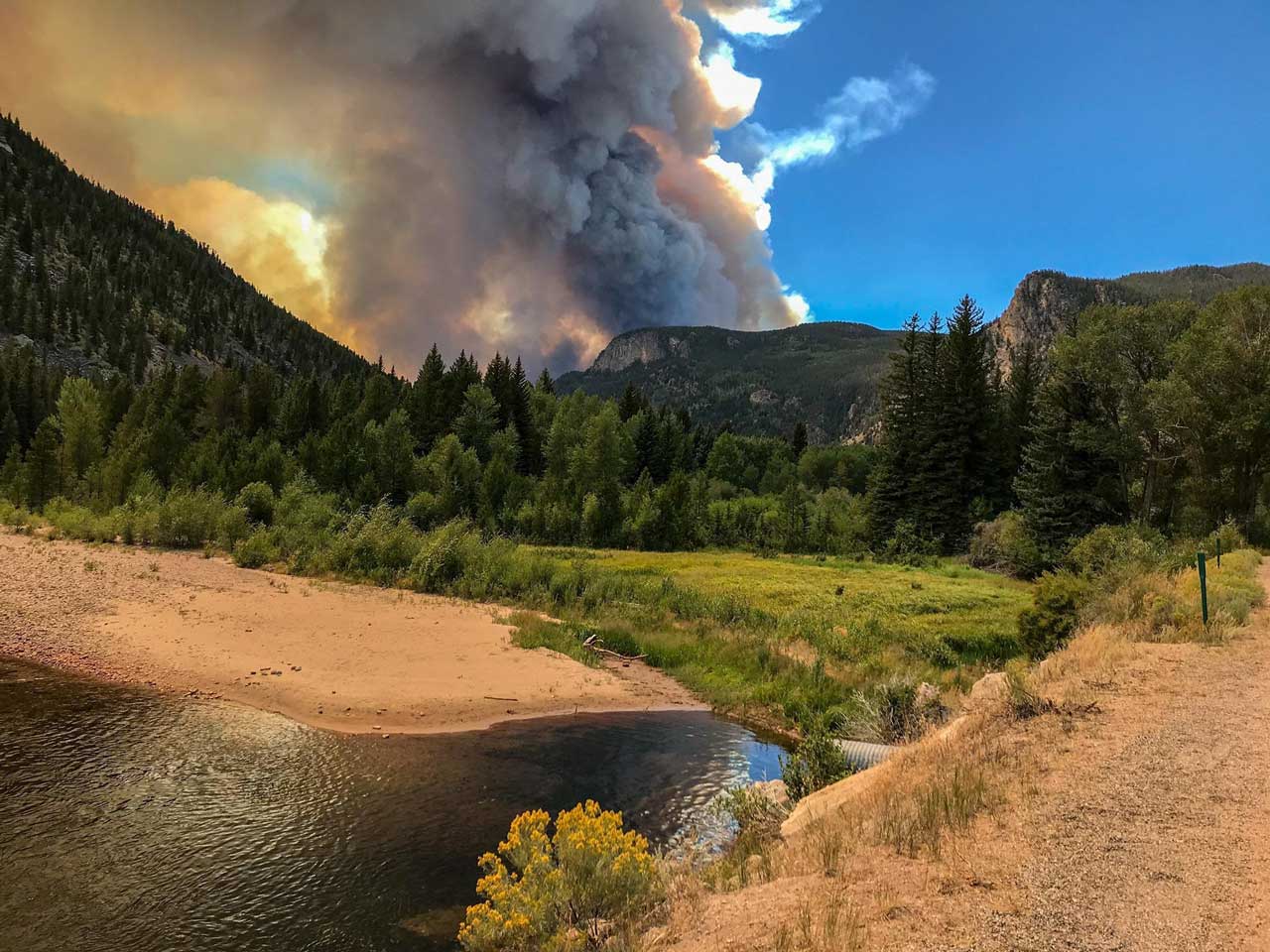 Between the High Park and Cameron Peak Fires, a broad reach of the Poudre River’s watershed has burned within the last decade.
Courtesy Wellington Fire

Oropeza and the rest of the city’s water utility staff are bracing for several years of effects from the Cameron Peak Fire, because the likelihood of getting another record-breaking flood soon after is small.

“This time around I imagine we'll see both the reservoir impacts, and the hillslope runoff, as well as likely see those sediments stick around a lot longer,” Oropeza said. “I think we're better prepared from a treatment standpoint, understanding what we can and can't do.”

While the High Park Fire spread across the watershed’s lower elevation ponderosa foothills, the Cameron Peak Fire has burned a uniquely different stretch. The new fire started, and expanded, near the river’s headwaters. It also weaved its way around reservoirs critical to municipal and agricultural water users across the region. Ashy runoff can clog their pipes, canals, ditches, spillways and dam outlets too, and carry other toxic compounds. If left unchecked, nutrients transported in the water can spur algae growth in nearby reservoirs.

“That's one of the most important points about this whole fire is that it's in a sort of high value location for water supply in the Front Range,” said Chuck Rhoades, a researcher with the Forest Service’s Rocky Mountain Research Station in Fort Collins. He studies how large-scale disturbances in forests can affect water quality. 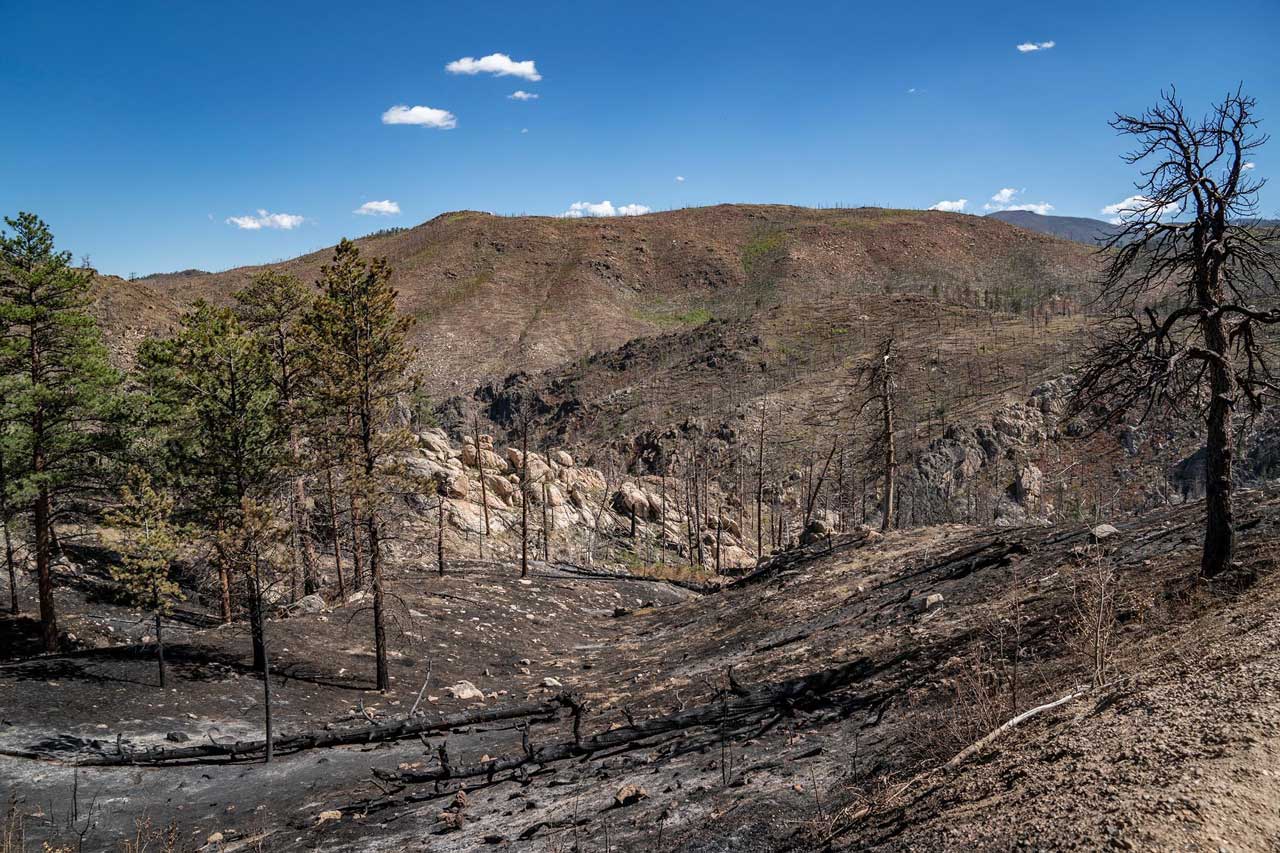 Between the High Park and Cameron Peak fires, nearly the entire southern half of the Poudre watershed has burned in the last decade. The extensive nature of the burn, and its severity in places, will have effects on people downstream.

The Cameron Peak Fire has swept through high elevation stands of spruce, fir and lodgepole pine, Rhoades said. Many of them had been dead for a decade or more from outbreaks of pine and spruce beetles. Unlike where the High Park Fire burned, higher, often wetter forests aren’t as well adapted to wildfire.

“Fires may come much less frequently, and they might be fairly damaging,” he said. “Some of those forests haven't burned for hundreds of years, and in many of them, trees are over 300 years old.”

Rhoades recently visited some areas of the Cameron Peak Fire’s burn scar, with a team assembled by the Forest Service’s Burned Area Emergency Response. He was with municipal and agricultural water providers who are already starting to think how coming rain and snow storms might move ash and sediment into their infrastructure.

“Nobody was in a good mood, I'll tell you that,” he said. “They just realized that they've got a lot of work ahead of them.” 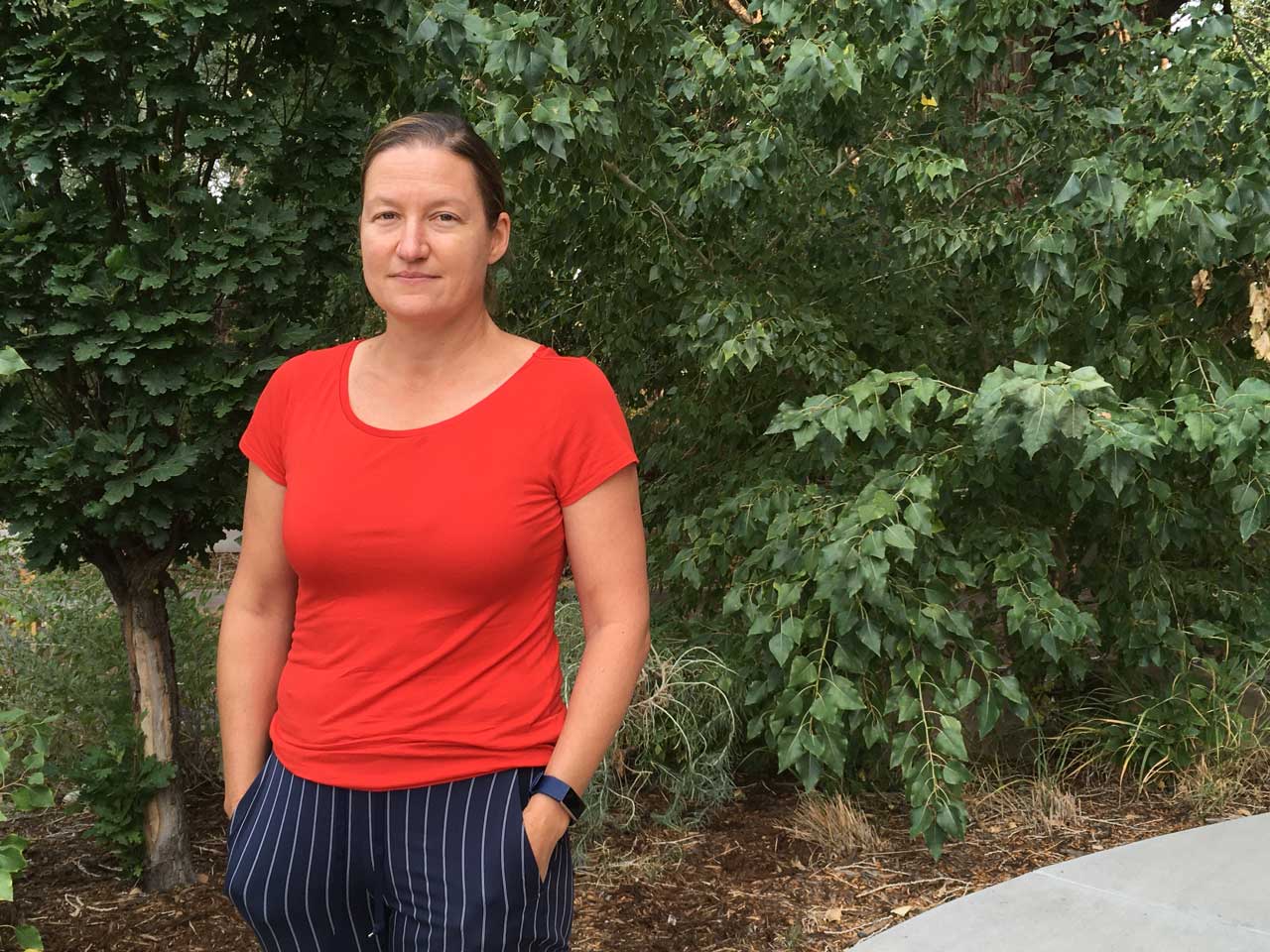 VIEW LARGER Coalition for the Poudre River Watershed director, Jen Kovecses, says her group is already focused on what a recovery from the Cameron Peak Fire might look like.
Luke Runyon/KUNC

But because the High Park Fire happened so recently, Fort Collins is likely more prepared than other communities in the West to deal with this new fire. Jen Kovecses runs the nonprofit Coalition for the Poudre River Watershed. The people who came together and formed her group after the High Park Fire are already talking about recovering from the current one, while it’s still burning, she said.

“It doesn't make the situation less stressful, or maybe it makes it moderately less stressful, but the reality I think of a fire footprint this big is just it's a lot to take in,” she said.

The 2020 fire season has renewed a region-wide discussion about forest health, Kovecses said. Her group has tried to be as proactive as it can, attempting to alleviate forest management mistakes of the past. But this year’s fires moved too fast. The coalition was planning to help with forest thinning projects and prescribed burns in the same areas the Cameron Peak Fire swept through.

If cities throughout the West want to avoid long-term water quality problems, Kovecses said, municipal leaders should be thinking about how to reduce the risk of megafires outside their city limits before they happen.

Collaborative groups, like the one Kovecses runs, have sprung up in response to fires throughout the West. Cities facing impending drinking water problems can often be the first to sign up for cooperative watershed management, said Kyle Blount, a post-doc researcher at Washington State University. He co-authored a case study on the High Park Fire response, and the coalition’s creation.

“A good bit of the funding initially came from Fort Collins and Greeley because that's where they get their drinking water and that is a primary concern,” Blount said.

“Obviously the immediate impact of the fire and the loss of property and the occasional loss of life is severe and significant, but there's an ongoing impact to the water supply as well,” he said. 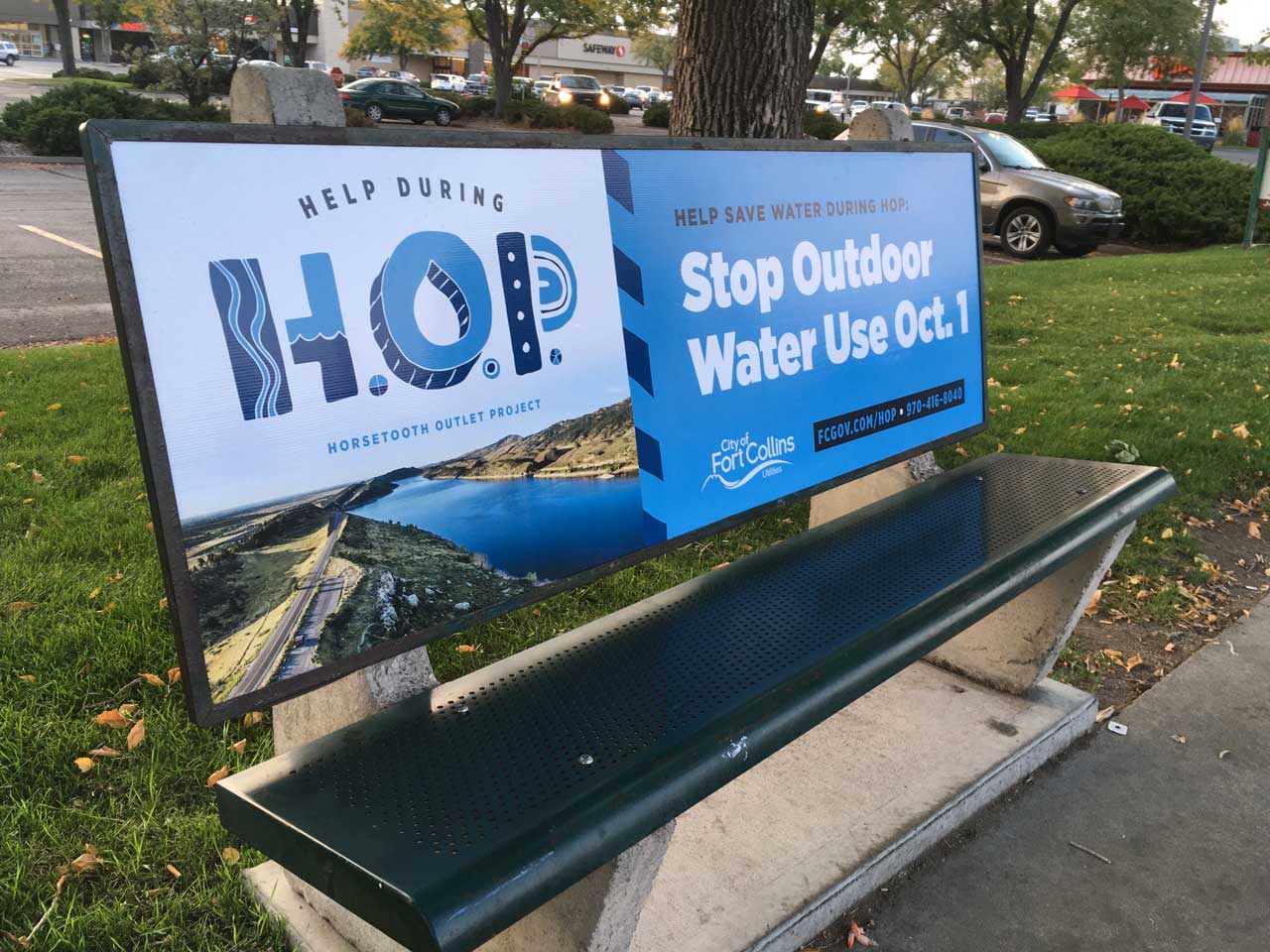 A sign in Fort Collins, Colo. urges residents to curb their outside water use, partially in response to the potential for wildfire runoff from the Cameron Peak Fire.
Luke Runyon/KUNC

Some decisions the city of Fort Collins made after the High Park Fire, like building a basin near its water treatment plant to remove some sediment, and investing time in testing which treatment protocols work and which don’t, will help the city respond this time, said Jill Oropeza.

Plus, unlike some other smaller cities, Fort Collins does have the ability to switch to other supplies, like Horsetooth Reservoir. That redundancy in the system was crucial in the years after High Park, she said.

Because the city had hours of tough conversations with partner organizations after the High Park Fire, they can rely on those existing relationships with researchers, federal agencies and others to ease the burden.

“We live in fire-prone watersheds,” Oropeza said. “And it's part of our responsibility to adapt to that reality,”

When wildfire burns a high mountain forest, what happens to the snow? Colorado River watershed forecast looks very dry for start of 2021 Checking in on the health of the Santa Cruz River
By posting comments, you agree to our
AZPM encourages comments, but comments that contain profanity, unrelated information, threats, libel, defamatory statements, obscenities, pornography or that violate the law are not allowed. Comments that promote commercial products or services are not allowed. Comments in violation of this policy will be removed. Continued posting of comments that violate this policy will result in the commenter being banned from the site.