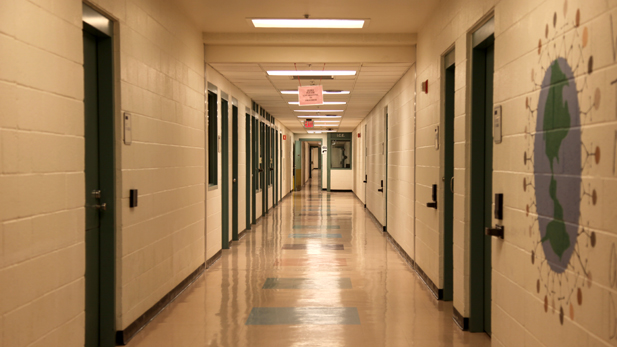 Catholic Community Services announced Monday that it's taking steps to secure part of Pima County's Juvenile Justice Complex as the new location for its asylum seeker shelter in Tucson.

Since January, the Benedictine Monastery on Country Club Road has housed immigrants as they rest and plan where they'll live in the United States to await an immigration judge's rule on their asylum claims. In a letter to County Administrator Chuck Huckelberry, Edward Weisenburger — bishop of the Catholic Diocese of Tucson — wrote that the shelter needs to relocate due to construction at the monastery.

"Even though the monastery was a lovely environment, it was not setup in its infrastructure for our needs. The plumbing system especially was a real challenge," said Weisenburger. "We believe this is gonna be much easier to provide a safe, healthy, appropriate environment for people who are just really coming to us on a temporary basis, anywhere from a few hours to a few days."

He said the juvenile detention center on East Ajo Way meets all of their needs: it can house up to 300 people, accommodate at least 50 Catholic Community Services volunteers, needs little renovations, has a central location, and has laundry and kitchen services on-site. Weisenburger said they were also looking for a place with an affordable price and a minimum one-year lease.

According to a letter written by Huckelberry, county staff are writing up a one-year $100 renewable lease for the property and are preparing the center for habitation. However, this preparation could all be for naught if the county's Board of Supervisors does not approve the lease at their next board meeting on August 6.

Weisenburger said that even though they're supposed to be out of Benedictine Monastery by July 26, he believes the owner of the property will let them stay until they've secured their next shelter site.

"We've looked at it and we believe we can make it an exceptionally warm and inviting space — removing locked doors, so that spaces are open, moving in pleasant furnishings," said Weisenburger.

Jan Lesher, chief deputy county administrator, said the optics of housing people who are in the United States legally at a detention center has been a hurdle for the county.

She said the juvenile detention center was built to house approximately 350 youth, but now usually has less than 50 people a day.

"What is it we need to do to be sensitive to the fact that we have people staying in the community for a period of time but they are not locked up," said Lesher. "They're not in a detention facility. They're simply in a building that used to be used as one."

She said the county does not know how much money it would cost it to renovate the space, but she hopes the county can be reimbursed by the federal government, who is responsible for bringing the asylum seekers into the community. According to Huckelberry's letter, the county will also pay for the utilities, food and laundry services used by Catholic Community Services at the center. He wrote that the county will seek reimbursement via Operation Stonegarden, a federal grant that usually reimburses law enforcement agencies that work with Border Patrol, and from the Arizona Department of Homeland Security.

"The reality is that over 10,000 people this year have been released in this community. Customs and Border Protection — the federal government — are either going to release individuals who are seeking asylum in the United States on the streets or at the bus station or within a location," said Lesher. "What we hope to do is make it as seamless as possible for those who live in the community and those asylum seekers passing through."

Migrant shelter in Benedictine Monastery preparing for move A record number of migrants died along the U.S.-Mexico border in 2021 Arizona data shows another deadly year for migrants along the border
By posting comments, you agree to our
AZPM encourages comments, but comments that contain profanity, unrelated information, threats, libel, defamatory statements, obscenities, pornography or that violate the law are not allowed. Comments that promote commercial products or services are not allowed. Comments in violation of this policy will be removed. Continued posting of comments that violate this policy will result in the commenter being banned from the site.