In recent years, the U.S. and Mexico have begun committing resources to restore portions of the final hundred miles of the dried-out delta. by Luke Runyon, KUNC TWEET SHARE 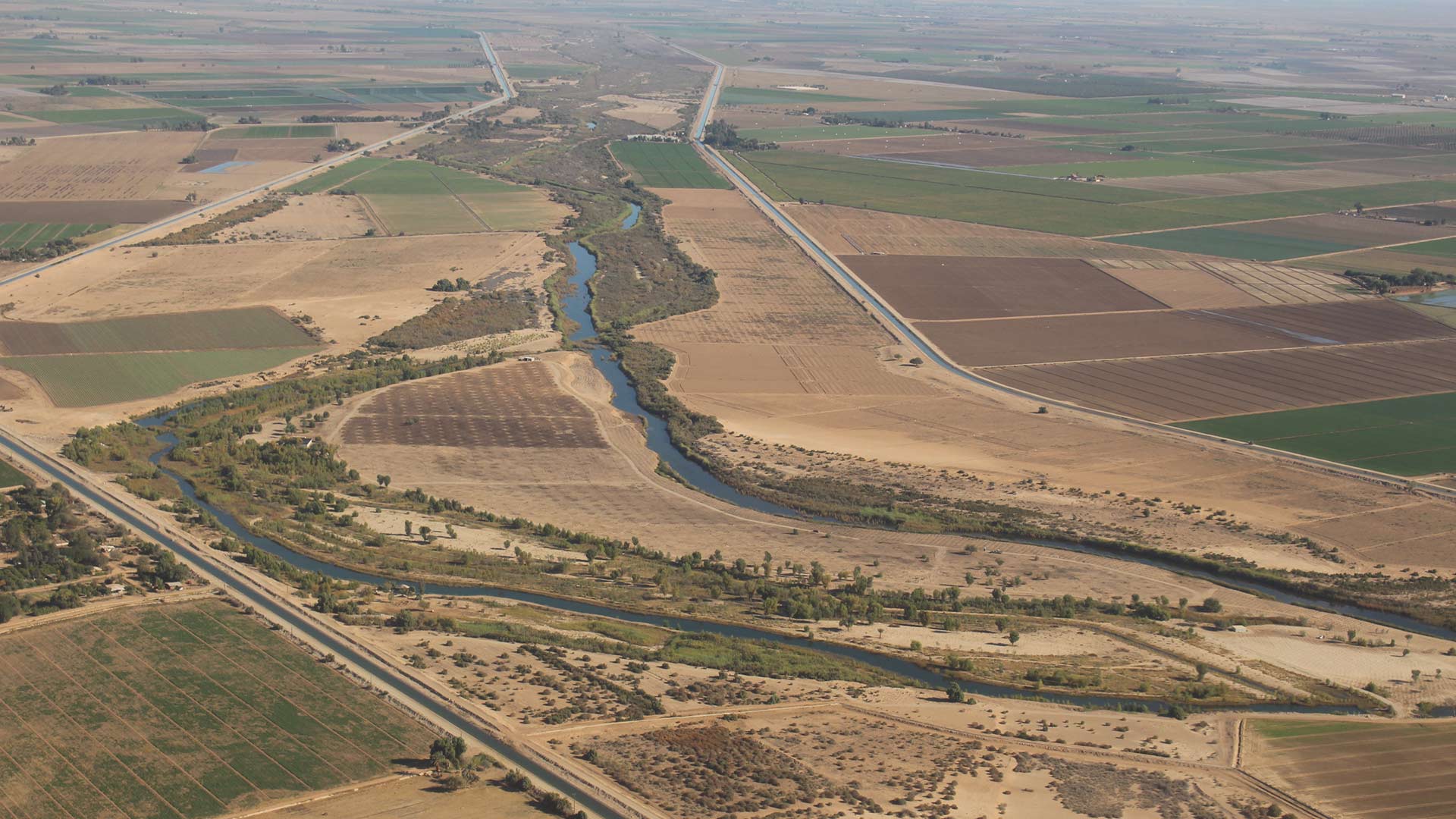 Bordered by irrigation canals, restoration site Chausse is meant to replicate a bend in the Colorado River, with marshy areas and native vegetation.
Luke Runyon/KUNC/LightHawk
LISTEN

LAGUNA GRANDE, BAJA CALIFORNIA, MEXICO — It’ s midmorning in the Sonoran desert, and already the temperature is rising.

Karen Schlatter suggests we find some shade, a relatively easy task at Laguna Grande, a restoration site along the Colorado River’s historic channel in Mexico. It’s managed by the Sonoran Institute, where Schlatter is associate director of the binational environmental group’s Colorado River Delta program.

We head over to a stand of 30-foot cottonwood trees within the intensely managed site. Walking through the canopy, away from the direct sun, the temperature drops quickly.

“This forest here is probably five years old,” Schlatter said. “Trees and habitat can establish really quickly in the Colorado River Delta when you give it the adequate conditions: water, sunlight and not very high soil salinity.”

Zig-zagging around us, among the trees, is a sprawling network of irrigation ditches. It’s almost laid out like a farm. Instead of the food crops grown all around this site, Schlatter’s team grows trees and willows, prime habitat for birds, coyotes, frogs and other wildlife. The whole site only receives water a couple times a year. 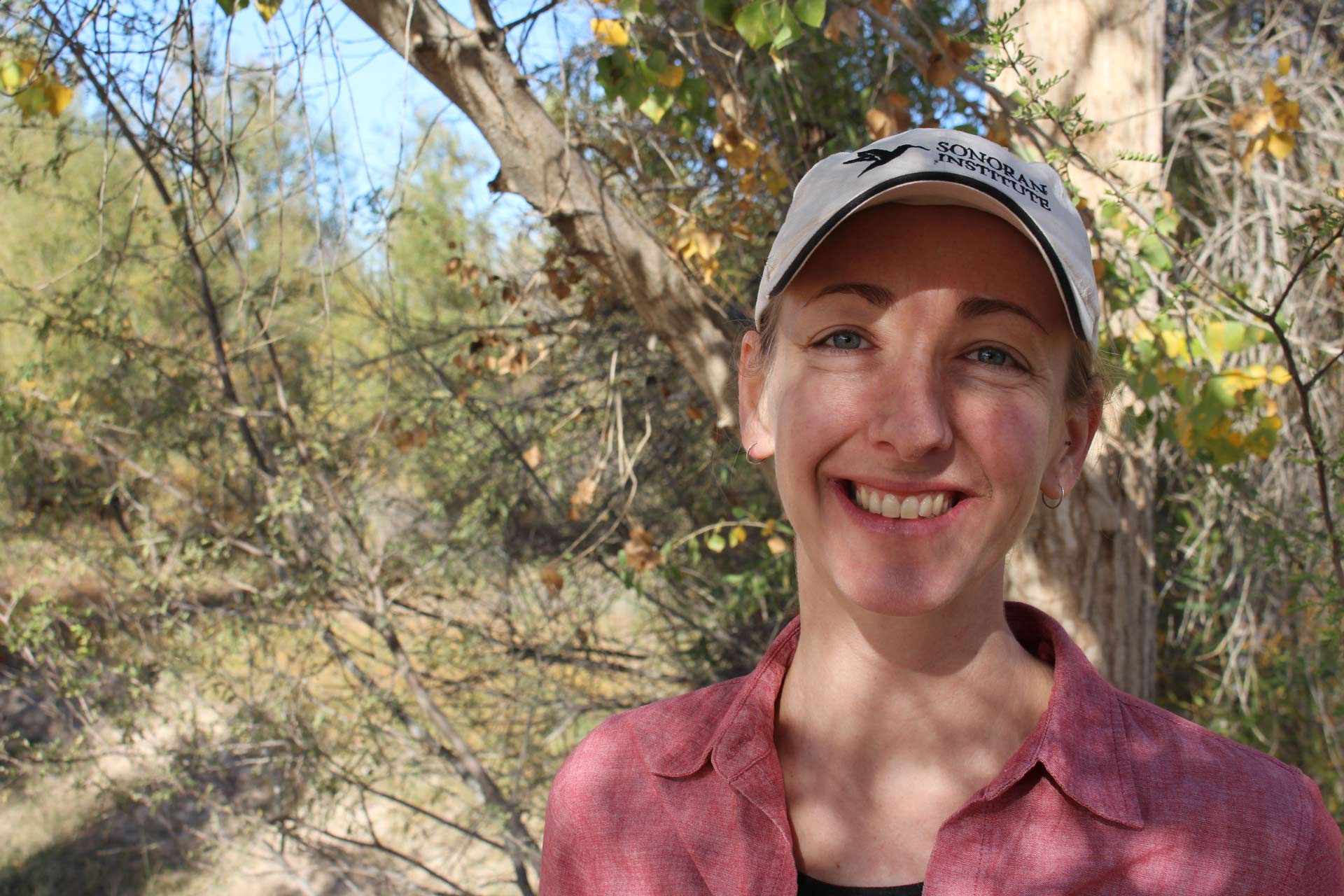 Midway through our walk, we come across a dusty trail leading from the woods down to a pool of water in the Colorado River’s channel.

“Yeah, so this is a beaver trail,” Schlatter explained. “We had beavers arrive to the site, I think five years ago. Two years ago we had an entire beaver family and there were little baby beavers running everywhere and everyone was freaking out.”

This place is an attempt to give a glimpse at what the Colorado River Delta used to be when the river emptied into the Pacific Ocean — a healthy mix of cottonwood forests, vast lagoons and thriving estuaries.

But for the last 50 years, the delta has become a husk of its former self.

Since then, growing cities and farms in the Southwest have claimed more and more water promised to them under the 1922 Colorado River Compact, leaving its delta in northern Mexico dry. The delta’s problem isn’t one caused by drought and aridity. It’s the byproduct of a river promised to too many people, collateral damage in the effort to make the desert Southwest capable of supporting millions of acres of crops and burgeoning cities. 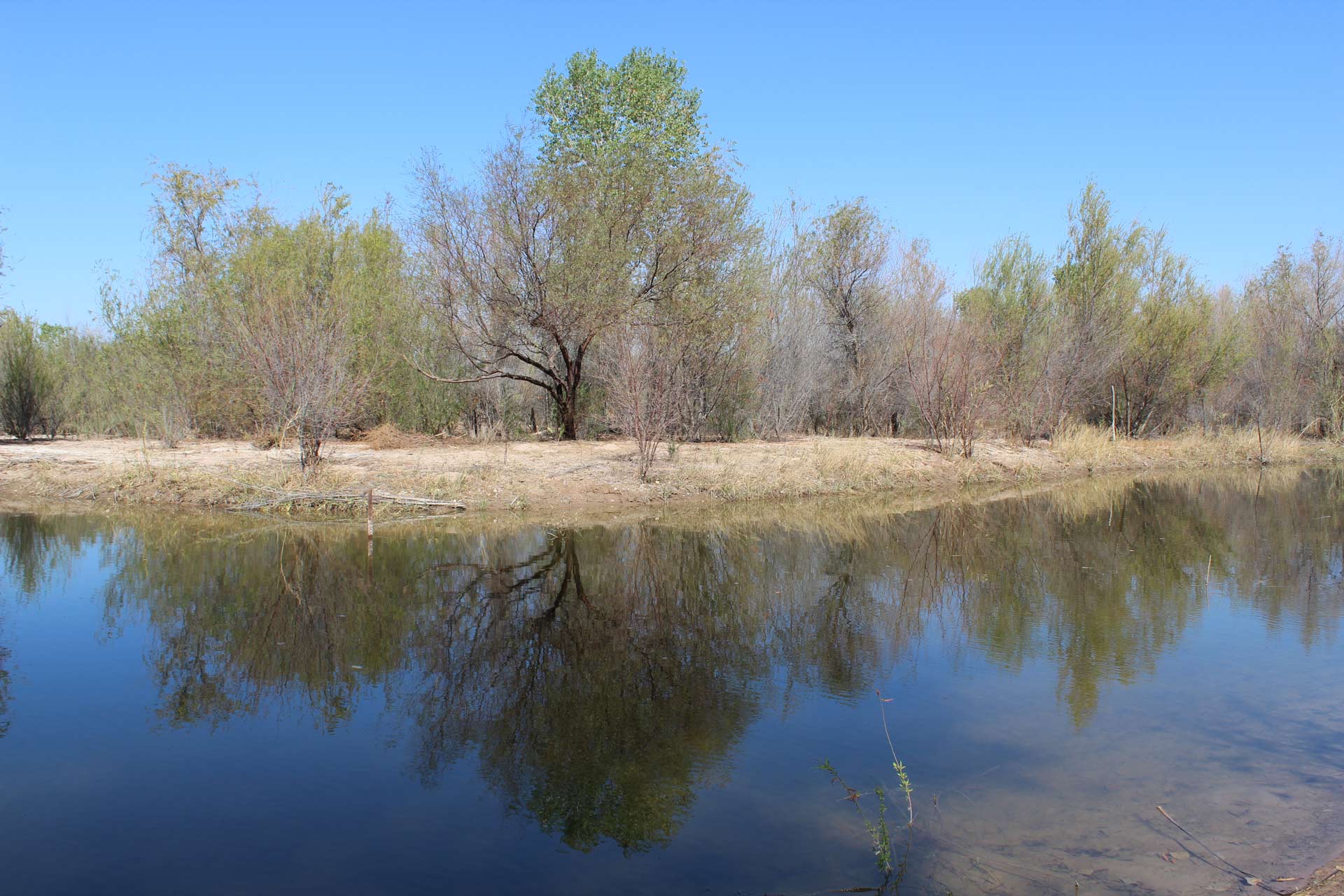 VIEW LARGER A stand of trees are reflected in a pool of water at Laguna Grande, a restoration site in the Colorado River delta, managed by the Sonoran Institute.
Luke Runyon/KUNC

Within the last 15 years, though, the countries that rely on the river — the U.S. and Mexico — have begun committing both funding and water to restore portions of the dried-out delta and bring some life back to the Colorado River’s final hundred miles.

The water arrives at Laguna Grande the same way it arrives at farms in Mexico’s Mexicali Valley. It comes here via a network of irrigation canals that criss-cross the valley, delivering the Colorado River’s water. A concrete-lined canal passes right by the restoration site.

The delta’s problem isn’t one caused by drought and aridity. It’s the byproduct of a river promised to too many people, collateral damage in the effort to make the desert Southwest capable of supporting millions of acres of crops and burgeoning cities.

The water is either purchased from farmers within the valley by a trust, or water dedicated to restoration by the U.S. and Mexico. Under an agreement called Minute 323, 210,000 acre-feet of water will flow to sites like Laguna Grande until 2026. A portion of that water is made available by making irrigation upgrades within the Mexicali Valley, and the U.S. committed $31.5 million to fund those upgrades. 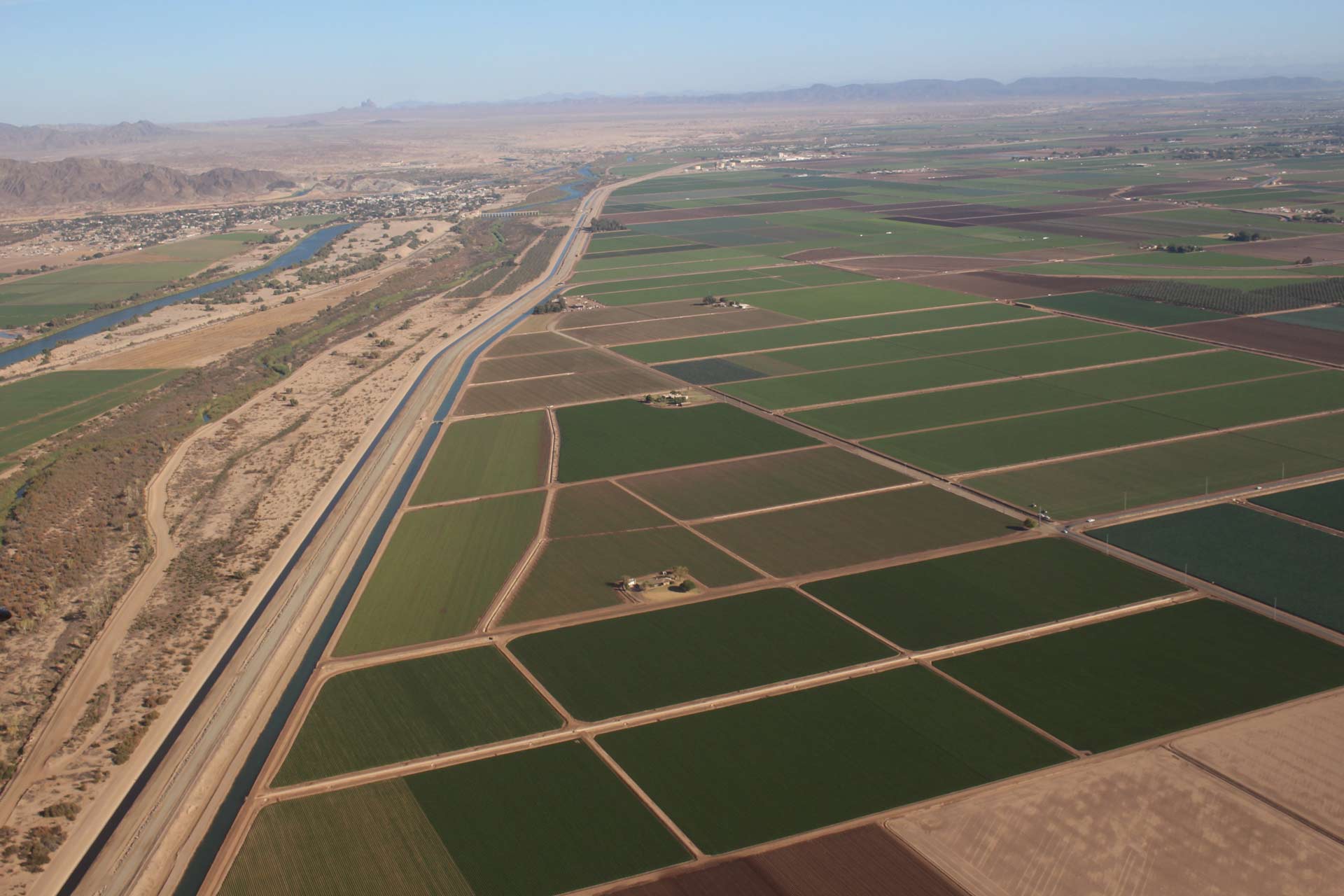 A previous agreement, called Minute 319, allowed for a pulse flow through some of the restoration sites and some water for so-called base flows, or water that would be delivered more deliberately to the restoration areas.

Under Minute 323, $9 million is set aside for restoration work, split equally among the U.S., Mexico and a set of environmental organizations that work in both countries. Another $9 million is committed to an ecological monitoring program. Karl Flessa at the University of Arizona is part of that team of scientists gathering data and observations from the delta.

“These are parks,” Fless said. “Think of them as little green parks scattered along the course of the river.”

So far, Flessa’s group of scientists have found a dramatic increase in the number and species of birds coming here. Other wildlife are making a comeback. Flessa says the early results are promising.

A report published in December 2018 by the International Boundary and Water Commission found the “abundance and diversity of birds in the riparian corridor increased 20% and 42% after the 2014 pulse flow.” That burst of bird activity did diminish after 2014, but remained higher in the managed restoration areas.

“The river is dried up below Morelos Dam (at the U.S.-Mexico border),” Flessa said. “And restoring some of that flow below the dam even to small park-like restoration areas, that’s restoring a little bit of environmental justice.”

'It is for wildlife and for people'

A few miles upstream of Laguna Grande, whitewater gushes out of an irrigation canal into another restoration site, El Chausse. 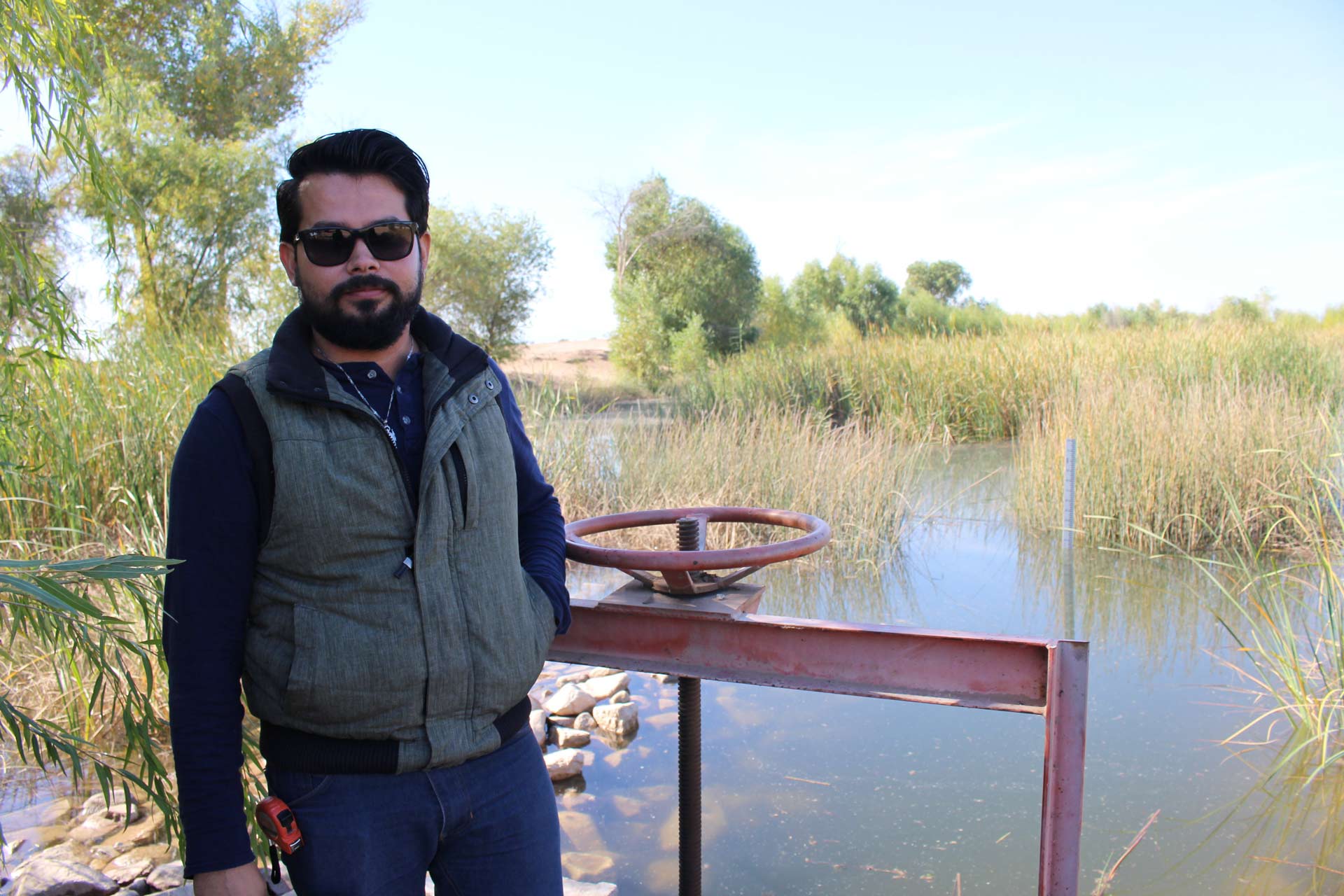 “This site is very complex, maybe more than other sites because of the water management,” Salcedo said through a translator.

Chausse is meant to replicate a bend in the Colorado River. Teams here ripped out invasive species like saltcedar, and planted native vegetation. Instead of Laguna Grande’s bare, dry furrows, the site is more “natural-looking” with water flowing through multiple channels. Achieving that look and feel, with grassy marshes, takes a lot more resources.

“We have the water rights to make this place possible now,” Salcedo said. “But thinking about the future, it could be complicated to restore this kind of habitat at this level, because water could be more scarce.”

“It is for wildlife and for people,” Salcedo said. “In the beginning the plan was to just restore the river, the riparian vegetation and then when you get that back, the wildlife will start to come. Birds, mammals, polecats, coyotes.

“Then when the people see that, they want to come to the area and help.” 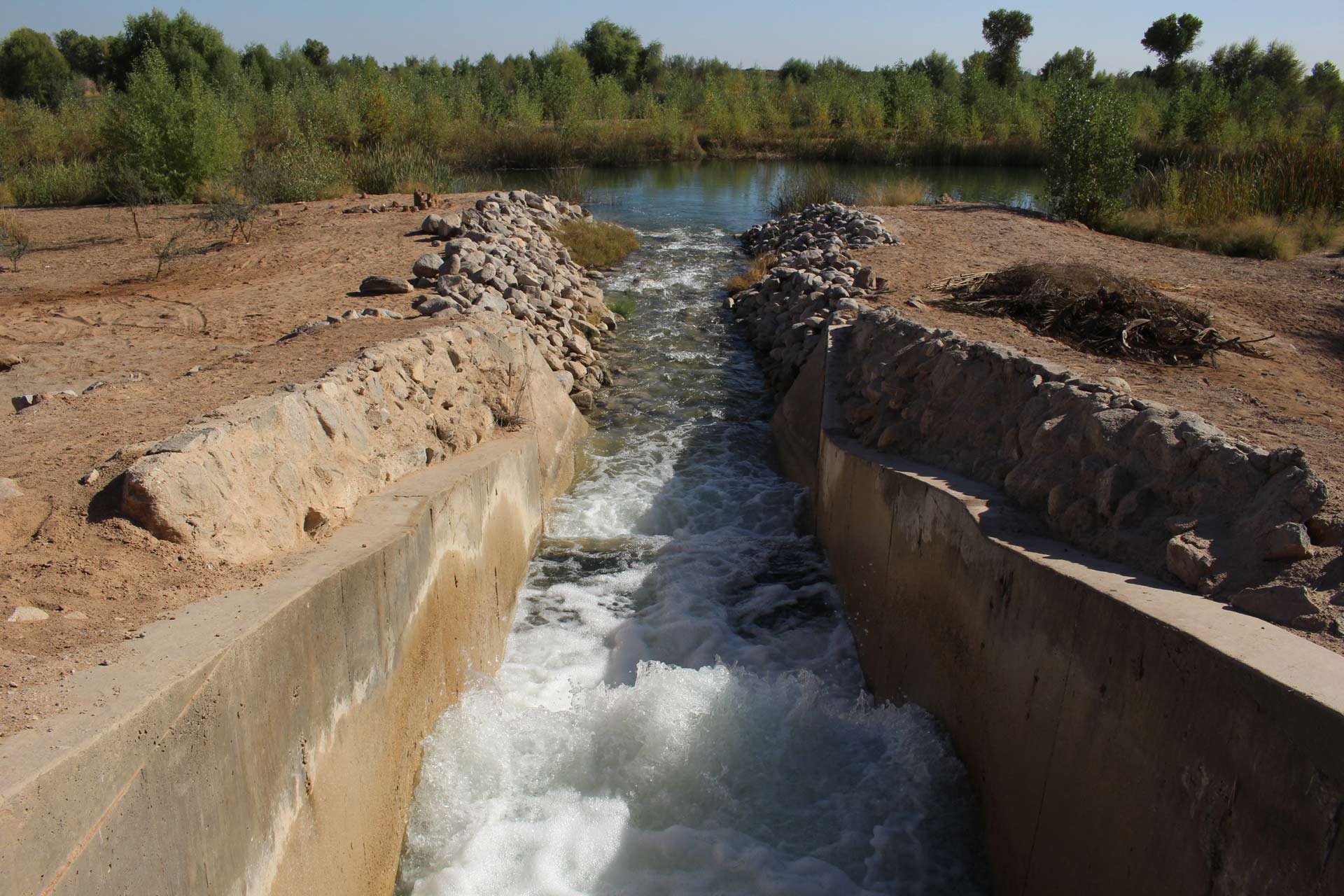 Like the entire Colorado River basin, climate change will put these restoration sites to the test, turning up the heat, increasing evaporation and diminishing water supplies.

“People are always asking, ‘Are you taking climate change into account?’” said the National Audubon Society’s Jennifer Pitt. “And we are in that we know that water will continue to be scarce and scarcer. And so we’re trying to use it to greatest effect.”

For example, Pitt said, in the latest U.S.-Mexico Colorado River agreements both countries spelled out how to handle shortages, and ensured restoration efforts wouldn’t be sidelined if supplies became more scarce.

Before leaving the site, we head down to a marsh, where tall grasses have taken root in a shallow pool. A secretive marsh bird called a sora has captured the attention of some of the site’s staff.

The tiny, spindly-legged sora weaves through the reeds and calls back, making a “kerwee” sound from its corn kernel-colored beak. It walks like it’s late for a midday appointment. Disappointed to find only a group of gawking humans and not a mate, the bird eventually heads back into the grass.

“Nobody intentionally dried out the Colorado River Delta, but it happened,” Pitt said. “When we had our eyes open to look at it and say, ‘Oh that’s terrible, what have we done?’ it took a kind of high level sovereign-to-sovereign agreement to start doing something about it.”

Special thanks for help in making this series possible to Alejandra Calvo-Fonseca, Will Worthington, Jim Afinowich, Esther Duke, Christine Steele and Esther Honig.

District judge overturns another part of Rosemont Mine approval More concern, outrage over border wall's impact on sensitive desert lands Cochise County removes rented dumpsters used for San Pedro River border wall prep
By posting comments, you agree to our
AZPM encourages comments, but comments that contain profanity, unrelated information, threats, libel, defamatory statements, obscenities, pornography or that violate the law are not allowed. Comments that promote commercial products or services are not allowed. Comments in violation of this policy will be removed. Continued posting of comments that violate this policy will result in the commenter being banned from the site.