Eclipses in the Work of Shakespeare: Ominous Events

On Jan. 4, 2011, the Hinode satellite captured these breathtaking images of an annular solar eclipse.
NASA
LISTEN

Solar eclipses have occurred since the planets and their moons took their places in the solar system. And astronomical events have been noted in literature.

Kiefer said William Shakespeare featured these events throughout his works.

“The reason is quite simple. Probably most people in Shakespeare’s day were attuned to the sky. And they felt the events of the sky, the stars and other heavenly bodies had an influence on human society,” he said. 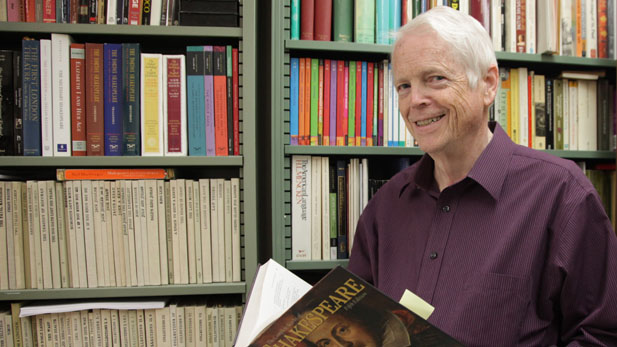 Distinguished University Professor & Shakespeare scholar Frederick P. Kiefer, who has been teaching at the University of Arizona since 1973.
Nate Huffman

“They would often see the heavenly bodies as being portents of some problems in human society. They might think of the eclipse as portending some war, assassination or some other dire event.”

The idea of astral influence was integral to Shakespearean society, he said.

“In Shakespeare’s day, there was no strict difference between astronomy and astrology,” he said.

Kiefer said one of the most famous examples of a literary eclipse reference is in Shakespeare’s “King Lear,” written in 1606.

“These late eclipses in the sun and moon portend no good to us,” was spoken by the Earl of Gloucester, making a connection between the eclipse and the collapse of his kingdom and family.

Kiefer said he witnessed a “dramatic” solar eclipse in Boston in 1970 when he was a graduate student at Harvard University.

“It was eerie. I remember it to this day.”

Do You Have a Plan for the Eclipse? Here Are Some Ideas Tucson Astronomer to Lead Citizen Observations During Eclipse Shakespeare's Works Influenced by Science
By posting comments, you agree to our
AZPM encourages comments, but comments that contain profanity, unrelated information, threats, libel, defamatory statements, obscenities, pornography or that violate the law are not allowed. Comments that promote commercial products or services are not allowed. Comments in violation of this policy will be removed. Continued posting of comments that violate this policy will result in the commenter being banned from the site.