3-2 board vote means assistant superintendent in TUSD will return to district in which he grew up. Tweet 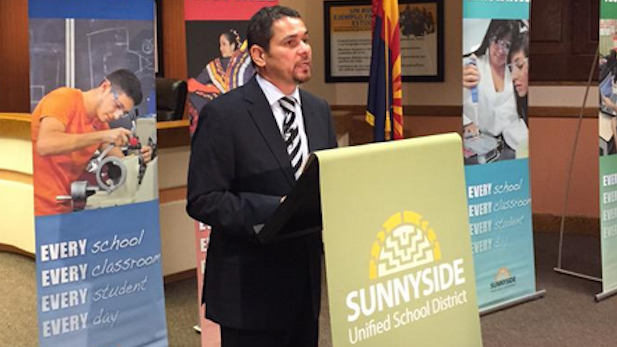 This story has been updated and corrected. from its original version.

The Sunnyside school board voted 3-2 to offer the job to Holmes. The other finalist was Manuel Valenzuela, superintendent of the Sahuarita Unified School District south of Tucson.

"We feel Mr. Holmes exemplifies the values of the Sunnyside community," school board President Daniel Hernandez Jr. said in an emailed statement. Hernandez voted with board members Buck Crouch and Eva Carrillo Dong to hire Holmes. Board members Eric Giffin and Becki Quintero voted no.

He grew up and attended schools in the Sunnyside district and earned a bachelor's degree at the University of Arizona. He also earned a master's degree from Harvard University.

Sunnyside offered Holmes a three-year contract at $150,000 a year, plus the potential for a bonus of up to $6,000 based on performance, according to the contract district officials distributed Friday. He also will receive an automobile allowance and a "business and civic activity allowance" of $600 a month.

Holmes and Valenzuela met with the community in forums this week. The board met in closed session Thursday evening for more than four hours to discuss the two candidates before taking a public vote on Holmes' appointment.

Holmes will take charge of a district that has seen dramatic leadership changes in the last 12 months. Two board members were recalled by voters in May and less than a month later, Superintendent Manuel Isquierdo was bought out of his contract.

Assistant Superintendent Eugenia Favela has run the district in the interim.

Sunnyside Superintendent Finalists to Meet Public Sunnyside Supt Gets $500K Buyout, Calls It 'Best for Everyone' Brnovich says City of Tucson can’t require COVID-19 vaccines
By posting comments, you agree to our
AZPM encourages comments, but comments that contain profanity, unrelated information, threats, libel, defamatory statements, obscenities, pornography or that violate the law are not allowed. Comments that promote commercial products or services are not allowed. Comments in violation of this policy will be removed. Continued posting of comments that violate this policy will result in the commenter being banned from the site.