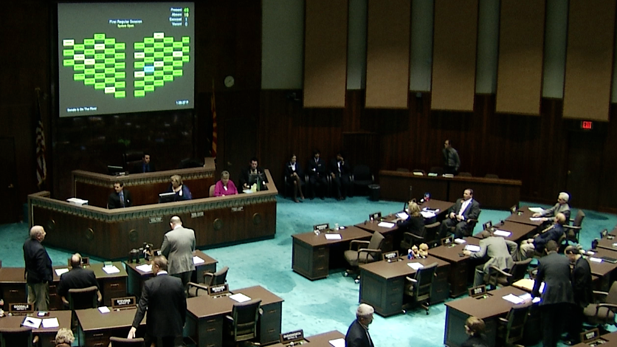 The Arizona House of Representatives, in a 2013 floor session.
azpm

A bill making it a felony for anyone except family members, care givers, politicians and their spouses to collect more than two early ballots from voters passed the Arizona House Appropriations Committee on Wednesday.

Sen. Don Shooter, R-Yuma, is the sponsor of SB 1339. He said it is a measure to keep ballot integrity strong.

"It is really a chain of custody matter, if you give your ballot to someone else, something else could happen," said Shooter.

Democrats oppose the bill. Rep. Eric Meyer, D-Phoenix, said it is a way of disenfranchising voters and there is no evidence that the voter fraud is happening. Opponents call the bill an answer in search of a problem.

The bill is a revival of part of an election reform package passed by the Legislature two years ago, but was repealed last year after opponents gathered enough signatures to put it on the November 2014 ballot.

The legislation would prevent the commission from investigating possible campaign contribution violations by candidates who don't participate in the Clean Elections program. The commission now claims it has that right under the voter-approved measure that created it more than a decade ago.

The bill would restrict investigations of non-participating candidates to the secretary of state, who is Arizona's top elections officer, and the state attorney general, who is the top law-enforcement officer.

The bill, sponsored by Sen. Steve Smith, R-Maricopa, approves the predictive policing software known as Predpol for a pilot program in Phoenix, Mesa, Maricopa and Sierra Vista. Money for the program would come from the concealed-weapons permit fund.

The Associated Press Contributed to this report.

Non-Profit Group Helps Tucson Voters Become Politically Active Ducey Vetoes Bill Keeping Police Officers' Names Secret Election Law Changes Debated in Legislature Monday
By posting comments, you agree to our
AZPM encourages comments, but comments that contain profanity, unrelated information, threats, libel, defamatory statements, obscenities, pornography or that violate the law are not allowed. Comments that promote commercial products or services are not allowed. Comments in violation of this policy will be removed. Continued posting of comments that violate this policy will result in the commenter being banned from the site.