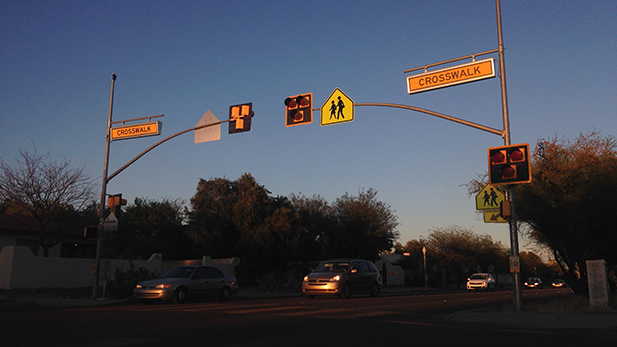 A HAWK pedestrian crossing similar to this will go along 22nd Street near Santa Rita Park.
Mariana Dale, AZPM

Officers will pose as civilian pedestrians later this month in a city-wide operation to ticket drivers who ignore the flashing red or yellow lights HAWK beacons, short for High Intensity Activated crossWalK. Drivers must slow when the lights turn yellow and stop when the lights turn red. Once the lights begin to flash and pedestrians clear the crosswalk, drivers may proceed through the intersection after coming to a complete stop.

The Tucson area has consistently ranked high nationally in the number of people killed by vehicles while walking. In Pima County, 25 pedestrians died in vehicle crashes in 2013.

Tucson Police are not specifying exact dates or locations of when the crosswalk enforcement operation will happen.

Stretch of Tucson's 22nd Street Dangerous for Pedestrians Brnovich says City of Tucson can’t require COVID-19 vaccines The intersection of mental health and crime
By posting comments, you agree to our
AZPM encourages comments, but comments that contain profanity, unrelated information, threats, libel, defamatory statements, obscenities, pornography or that violate the law are not allowed. Comments that promote commercial products or services are not allowed. Comments in violation of this policy will be removed. Continued posting of comments that violate this policy will result in the commenter being banned from the site.