The Arizona House voted to approve a bill barring women from buying a health insurance plan through the federal marketplace that includes abortion coverage. by Christopher Conover Tweet 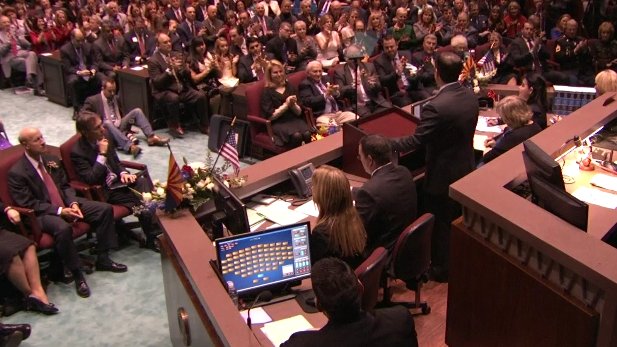 The abortion related bill was repeatedly passed over for votes last week, but on Monday, the Arizona House approved it on a 33-24 vote.

If signed by Gov. Doug Ducey, the proposal would bar women from buying a health insurance plan through the federal marketplace that includes abortion coverage.

The most debate came over an amendment requiring doctors to tell a woman that a medically induced abortion could be reversed. Democrats and some Republicans lined up against that language.

"Putting it in statute that this is available makes it sound like it has already had all the evidence and all the background available,” Cobb said.

“If they choose to ignore the information, they ignore it,” said Farnsworth. “But what happens if it hasn’t been disclosed and they go in and take this RU 486 and they have second thoughts and they want to reverse it?”

The amendment was adopted on a voice vote. The Senate will need to approve the amendments before it can advance to the Governor's desk.

State Rep. Roberts abruptly announces resignation State fairgrounds charges Senate $128,074 for election review Brnovich sues Biden over vaccine mandate
By posting comments, you agree to our
AZPM encourages comments, but comments that contain profanity, unrelated information, threats, libel, defamatory statements, obscenities, pornography or that violate the law are not allowed. Comments that promote commercial products or services are not allowed. Comments in violation of this policy will be removed. Continued posting of comments that violate this policy will result in the commenter being banned from the site.