Judge Drops Most Charges in Trial of Immigration Activists 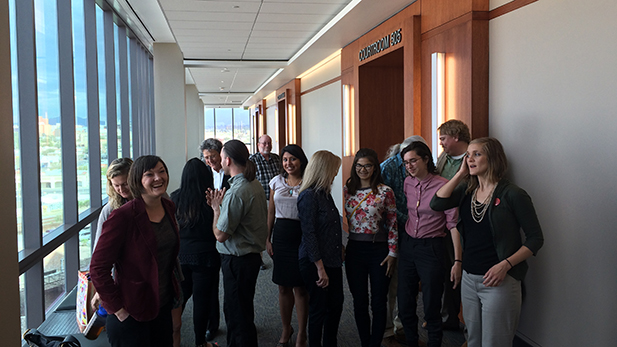 Activists take a photo after judge dismisses five of seven charges against them regarding 2013 protest.
Fernanda Echavarri, AZPM

Twelve protesters who stopped buses headed for Operation Streamline in 2013 are still facing misdemeanor charges for obstruction of a highway and public nuisance.

Justice of the Peace Susan Bacal dismissed four charges against the group and found protestors not guilty of charges of resisting arrest.

Bacal is expected to decide on the remaining two charges on April 13.

“Our obligation as Americans is to hold our government accountable,” Margo Cowan, a public defender and activist lawyer representing the group told the judge Monday. “This is not just a collection of petty offenses, it’s not just an inconvenience. It’s something much greater.”

Other protesters held signs denouncing Operation Streamline. Some of them were also arrested.

The Tucson Police Department closed the frontage road for several hours and used power tools to cut off the plastic pipes and other materials protesters used to tie themselves to each other, others unhook themselves before being arrested.

Mueller said Tuesday that the state is not seeking to punish the protesters First Amendment right "but it's reckless to stop two buses with detainees and armed guards in the middle of the roadway."

"We are not here to talk about Operation Streamline, but about how the protest was done," she said.

Operation Streamline Protesters Sentenced to Time Served Trial Begins for Immigration Activists Who Stopped Buses Poll: Arizonans Still See Illegal Immigration as Major Problem
By posting comments, you agree to our
AZPM encourages comments, but comments that contain profanity, unrelated information, threats, libel, defamatory statements, obscenities, pornography or that violate the law are not allowed. Comments that promote commercial products or services are not allowed. Comments in violation of this policy will be removed. Continued posting of comments that violate this policy will result in the commenter being banned from the site.