A dusting of snow transformed Tucson into a winter wonderland on Wednesday afternoon.

Many Tucsonans received a blizzard warning on Tuesday night and the forecast called for a 100 percent chance of snow. Despite the warning, University of Arizona students were surprised to see the flakes fall in the desert. 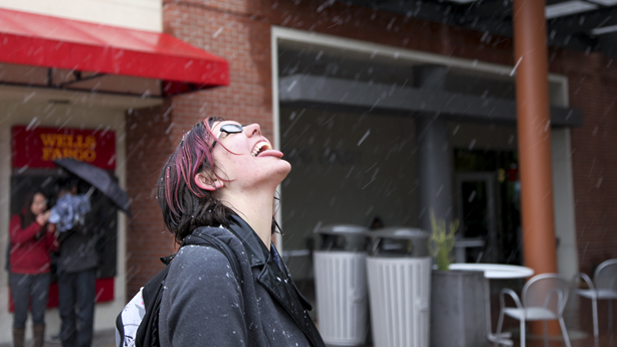 “I miss the snow so much,” said studio arts student Kiera Woods. “I’m just going to spend all the time I can out here because it’s just incredible.”

Woods was catching snowflakes on her tongue outside the student union. She said the snow brought back childhood memories.

“I’m from Corona So-Cal so I get a lot of sun and I was expecting the same here and that is a negative,” Slavin said.

Slavin and other students were bundled up in winter coats and hats. Scott Plummer sat outside and read a book wearing only a T-shirt and jeans.

“I’m from Ohio so the snow doesn’t really bother me,” Plummer said. “It was a surprise today.

The weather didn’t change his attire, but it did prevent him from riding his bike to school, Plummer admitted. 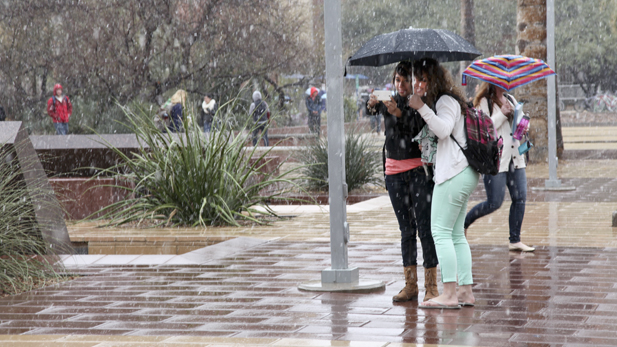 Ariana Gonzalez and Crystal Marinez snap a picture of themselves before walking to their car on Wednesday, Feb. 20, 2013.
Mariana Dale, AZPM

Ariana Gonzalez and Crystal Marinez huddled under an umbrella. Both are from Tucson and had seen its unpredictable weather before.

Marinez said she wanted nothing more than to run around in the snow, but Gonzalez, who wore flip-flops, had different priorities.

“I just want to get to my car,” Gonzalez said.

White Christmas in Tucson is No More Than a Dream 'Blizzard' Gone, But More Rain Coming Daily news roundup: No new coronavirus deaths reported by state, impact of census strong in AZ
By posting comments, you agree to our
AZPM encourages comments, but comments that contain profanity, unrelated information, threats, libel, defamatory statements, obscenities, pornography or that violate the law are not allowed. Comments that promote commercial products or services are not allowed. Comments in violation of this policy will be removed. Continued posting of comments that violate this policy will result in the commenter being banned from the site.